The Undeniable Allure of a Beautiful Ceiling

Often overlooked, ceilings are an untapped wealth of standout design

When it comes to architectural design, ceilings are mostly misunderstood and hardly ever the topic of conversation. But in reality, the ceiling and the floor basically design a space in volumetric terms. And in so doing, are as important an element as any architectural finish or component.

Over the years, ceiling design has factored heavily into our most unique and impressive projects. Here are a few prime examples of our adventurous approach. 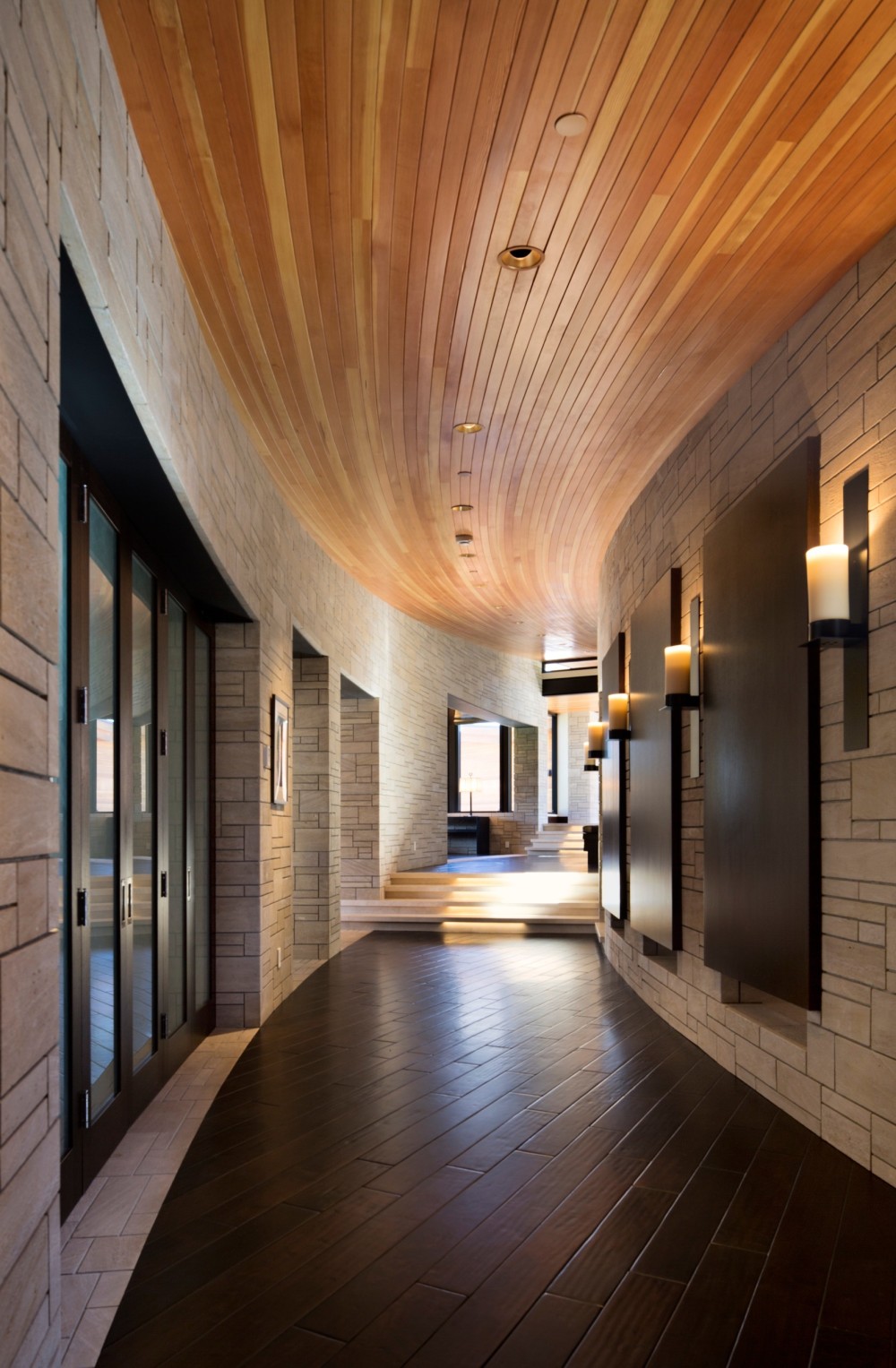 For this project, we sought to create a unique ceiling that accentuated the rhythm and movement of the overall design of the home, which is a large curvilinear form. We utilized small widths of Douglas fir and let each piece, plus the small groove between each board, accentuate the curvature.

Hard to miss as it waltzes across the 200-foot span from one end of the home to the other, this stunning ceiling is an organizing element for the design and gives texture, color, light and motion to the space. Interestingly, the arc follows the exact path that your eyes would sweep across if you were standing on the deck outside the living room looking at the panoramic mountain range in front of you.

A Night to Remember 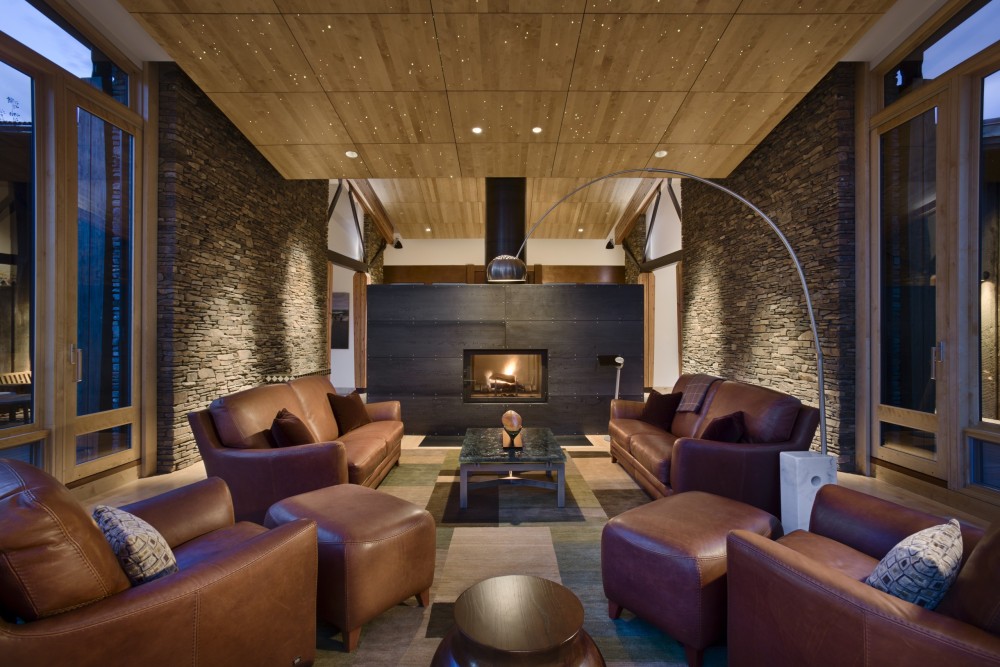 This cozy living room’s ceiling features a “cloud” constructed from laminated bamboo panels floating below the drywall ceiling above. Fiber optic terminals embedded in the ceiling panels create the effect of a night sky full of stars. Specifically, this one-of-a-kind ceiling is a model of the night sky over Sydney, Australia in the Southern Hemisphere (the homeowner’s place of birth) in 1935 (the year of his birth).

We sourced the layout for this design from an astronomy website and printed a copy in a very large format, then glued the printout to the ceiling and bored holes for the fiber optic lights. When the lights are dimmed and the ceiling is illuminated, the homeowners can travel back in time as they gaze up at Southern Cross and other familiar constellations. 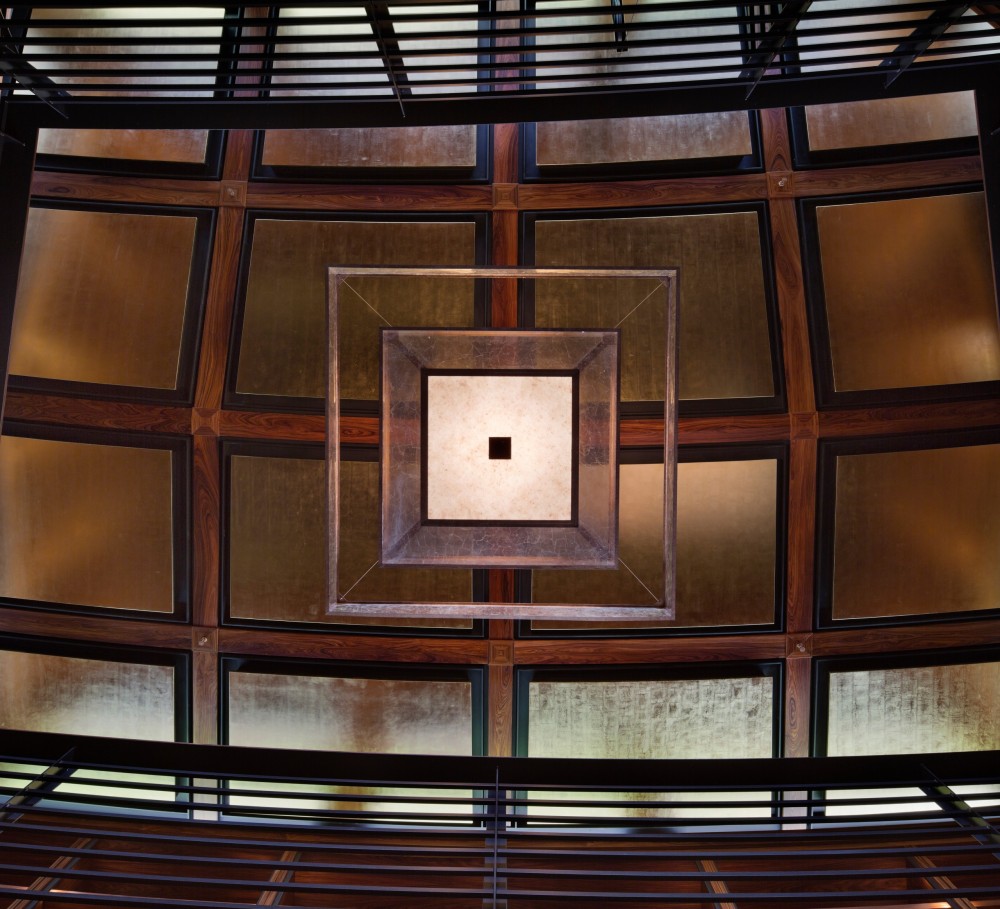 Viewed from below, the magnificent ceiling of this home’s two-story library establishes the character of the space and gives it a unique and strong identity.

On the outside, the roof is an inverted v-shaped. On the inside, descending from the lower portion of the v in the center is a striking mica and glass chandelier. The traditional coffered ceiling surrounding the chandelier is adorned with gold leaf applied between crisscrossing beams.

The room itself isn’t very bright, so the idea behind the design was to capture all the light in the space, most of which is generated by the central fixture. Additionally, the library stacks each have an integral light fixture shining upwards, which bounces off the gold ceiling and back down. The resulting light is indirect with no glare and best of all, it assumes the color of the gold leaf, giving everyone in the room a flattering golden glow.

Not Your Grandpa’s Pool Room 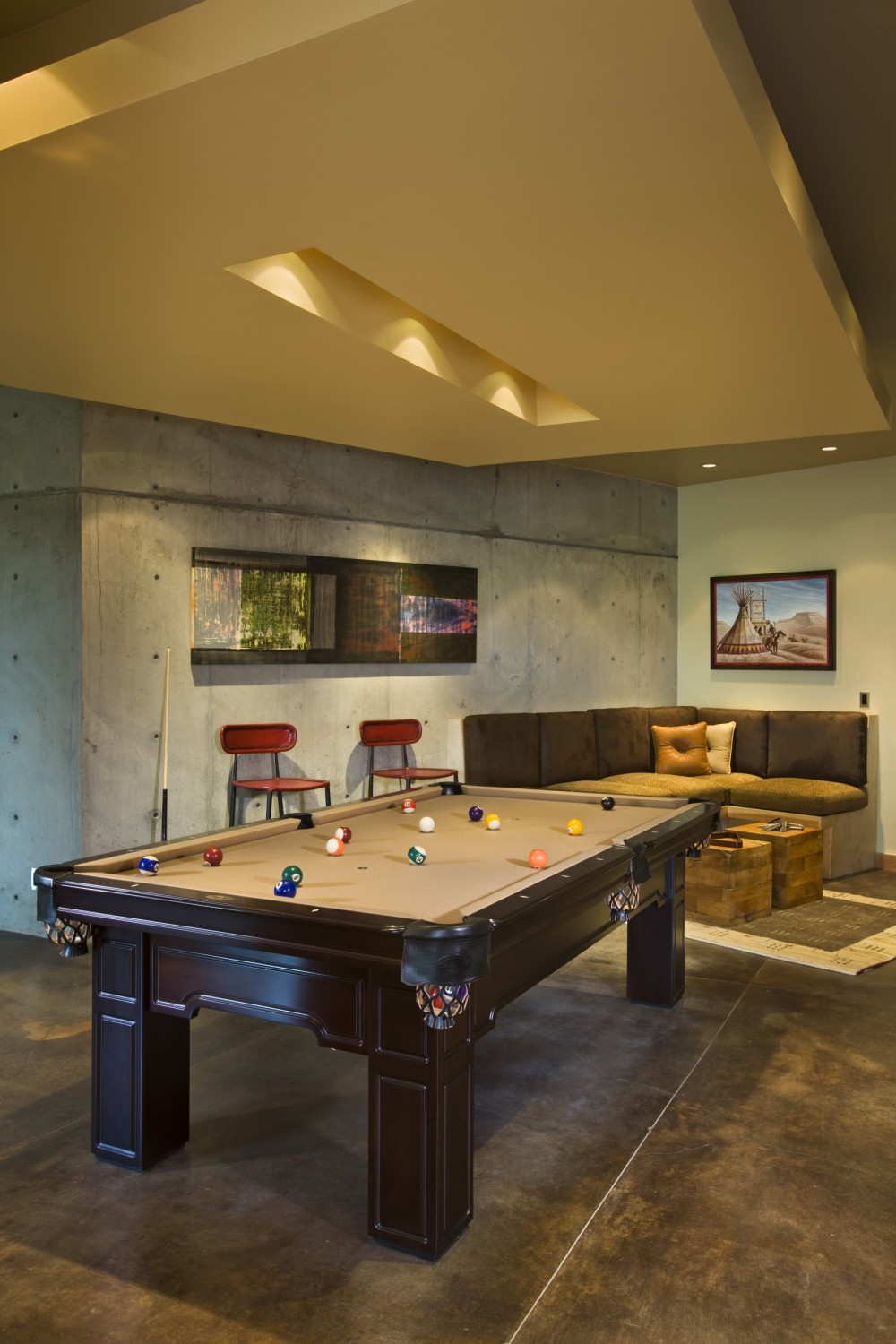 The familiar image of a pool room features an ornate Tiffany-style light hanging over the table or perhaps a more modern version that is, at best, distracting. Obviously, you need lighting that illuminates the playing surface of the pool table well, but we wanted something different for this space, something functional but more stylish and integrated into the design.

To achieve this, we dropped a sleek box down from the ceiling and recessed lighting focused on the center of the table into the canopy. Instead of a low-hanging fixture blocking your view, you can see across the entire room and talk with friends sitting in the settee in the corner. 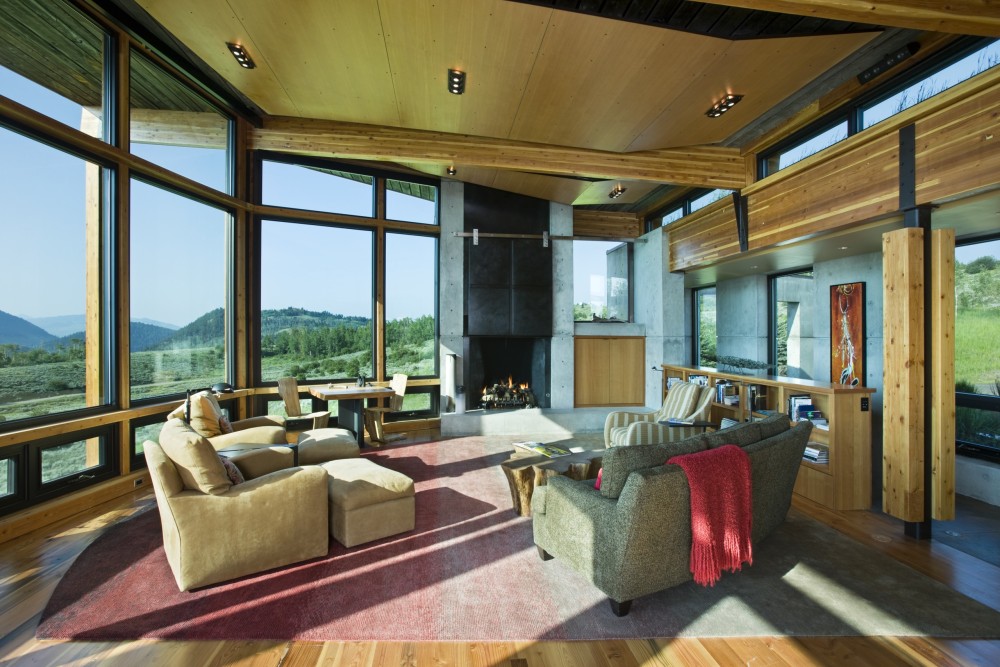 One of the phenomena of modern architecture is the predominance of hard surfaces. For example, this home’s beautiful living room is all about the floor and the glass. Glass is the most reflective surface one can put in the house in terms of acoustics; rooms with floor-to-ceiling windows tend to be very bright, which is to say they echo and reverberate.

In order to counteract this effect, we dropped a cloud of vertical grain fir panels below the reclaimed snow fence ceiling. The roof of the home is a simple shed, but the ceiling is more of a butterfly shape, putting a spin on the geometry of the room.

Hanging a ceiling with refractory angles like this serves to diffuse noise so you get better acoustical performance in the room.  In addition, it skips light deep into the center of the room from the clerestory windows on the right. 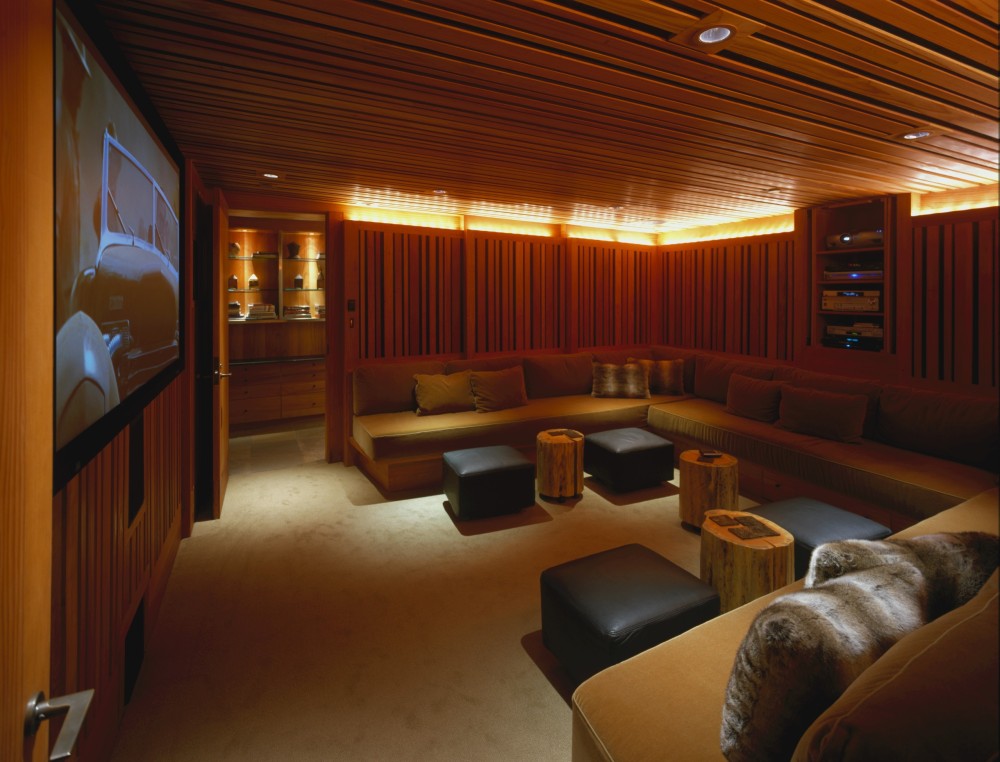 When you create a room that’s all about the experience, like this home theater, it’s important to eliminate all of the bouncing sounds in the room (as much as possible) in order to enhance the audio coming from the speakers. Carpeting, soft upholstery, pillows and human bodies serve as excellent sound absorbers, but we gave this room a boost with an acoustic application on the ceiling and walls.

Made from varying widths of wood planks and cushioned with tectum- a sound-absorbing material- in the gaps, the application absorbs unwanted noise, resulting in a nice clear sound. And in this case, the result was not only acoustically superior, it turned out to be a beautiful addition to the design as well.

Mitch Blake, AIA and Tom Ward, AIA are the founding architects of Ward + Blake Architects, an architecture firm based in Jackson, Wyoming, that specializes in environmentally specific design. View their profile or contact them at 307.733.6867.

Content for this article provided by Ward + Blake Architects.

Why Artisan Glass is a Better Choice for Glass Light Fixtures