Pottery That is Both Beautiful and Useful 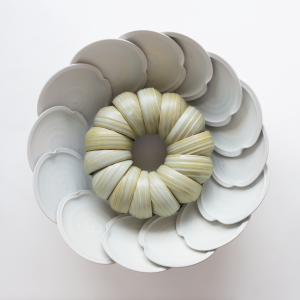 Cups nest together, their handles forming a gently scalloped edge. Bowls curve into each other to form beautiful organic shapes. Plates and bowls nestle, looking like just-opening flowers. They are utilitarian dishware when needed; they become intriguing tabletop sculptures when not in use. 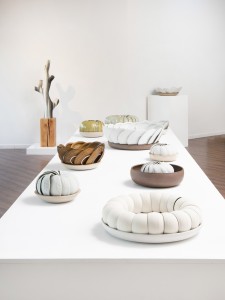 Meadows exhibits his work at the Harvey Preston Gallery in downtown Aspen, Colorado. The gallery is well-known for featuring ceramic artists with world-class reputations like Trey Hill (whose driftwood- inspired sculpture is seen in the top left) | Photo courtesy of Harvey Preston Gallery

Alleghany Meadows works at Studio for Arts and Works (SAW) in Carbondale, Colorado. He sits down at his wheel, centers a lump of clay and begins to shape a bowl. “As the weather gets colder, I start thinking about soup,” he says as he describes the bounty of his short-growing- season garden—chili peppers, zucchini, sugar snap peas, a 20-foot-long row of basil and 300 pounds of tomatoes. 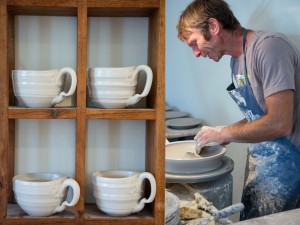 LEFT: People are seeking products that are distinctive and memorable. The appeal and meaning of a handmade cup come from the impossibility of ever creating another piece exactly like it. RIGHT: “Each object has marks from the pressure of my hands,” says Meadows. “Working with clay is a physical, tactile and visual experience and, like gardening, it reconnects you with nature.” | Photos by David Foxhoven

His latest body of work—called the Flora Series—was inspired by “The Peasant Wedding” by Dutch painter Pieter Bruegel the Elder (c. 1525-1569). “In the very bottom left corner of that painting, there’s a large bowl full of cups,” says Meadows. “This gives everyone an opportunity to choose exactly the right cup to suit the drink and their mood.” Although each piece in the Flora Series is composed of repetitive elements like cups, plates or bowls, the pieces are never the same. In each one, we can see the hand of the potter. “I love the responsiveness of the clay to the pressure of my hand,” he says. 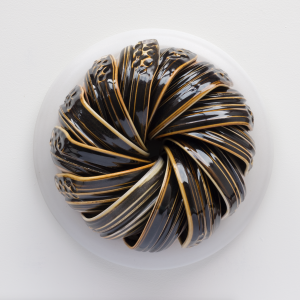 Organically inspired and subtly elegant in shape and hue, Meadows’ work reflects his personality and the sensibility of his training, starting with classes in high school and college, study in Japan and culminating with an MFA in ceramics from the New York State College of Ceramics at Alfred University in Alfred, New York.| Photo courtesy of Harvey Preston Gallery

Meadows grew up in Nevada City, California, a small gold rush town. His mother was a potter and a gardener. From an early age, he knew he wanted to be an artist and very nearly became a painter. A visit to San Francisco’s de Young Museum changed his mind. “The Japanese ceramics just blew my mind,” he recalls. In his junior year (at Pitzer College in Claremont, California), he went to Japan to study with famed 14th-generation potter Takashi Nakazato in Karatsu, on the island of Kyushu. “Every single dish was made by his hand … a different dish for each of the seasons,” says Meadows. Some were only used in spring, the season to enjoy bamboo shoots. Some only during cherry blossom season. Some were only brought out when the persimmons were perfectly ripe. 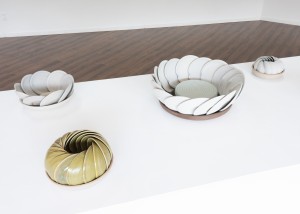 The porcelain and stoneware dishes and plates created by Meadows become quiet yet dramatic works of art when not being used on the dinner table. Meadows calls this his Flora Series, strategically positioned to mimic buds and blooms.| Photo courtesy of Harvey Preston Gallery

“I continue to be inspired by nature and the environment in every moment,” Meadows says, finishing the soup bowl and stacking it in the kiln with others like it … but subtly different. 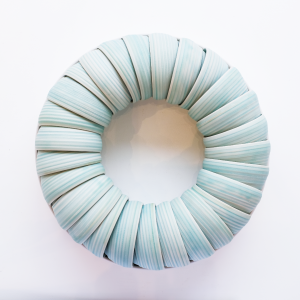 Hand-crafted pottery infuses everyday objects with beauty and gives them soul. Aspen’s restaurants and cafés have been com- missioning Meadows to create functional ceramics that not only showcase their food but also bring individuality to their tables. | Photo courtesy of Harvey Preston Gallery