For a husband-and-wife team of fly-fishing, golf-loving retirees, Montana seemed like the promised land for all things outdoorsy, with the added bonus of milder summer temperatures than their home base of Scottsdale, Arizona, could ever deliver. They discovered the perfect parcel for their second home at the Stock Farm Club, a private community near Hamilton, Montana, right in the heart of the Bitterroot Valley.

“We were particularly taken with the backdrop of the Bitterroot Mountains,” says the wife. The couple’s desire to fully capture those sweeping views helped determine which of the community’s subdivisions was best suited for their summer retreat. The Mountain Homes district allowed for contemporary takes on traditional building materials such as stone and wood, as well as oversized panels of glass that would not only do those peaks justice but also harness lavish amounts of sunlight, a cornerstone of contemporary (and sustainable) design.

The couple admired the windows their architect, Jerry Locati, had used at his Bozeman office: commercial panes with the modern touch of thin red-metal mullions. “I told Jerry, ‘Give me those; I love them,’” laughs the wife. Locati did just that, positioning monumental red-mullioned windows in the great room, master bedroom and the home’s signature curved passageway to take advantage of the southern exposure, which provides up to 14 hours of natural light during each summer day. “It’s possible to end up with too much light,” Locati says. “That’s where the large overhangs come into play. They take the edge off any harshness from the sun.”

The architecture employs a few more clever tactics to capitalize on the views. To reach the front entry, you must first drive past large barn doors and into a private courtyard—an approach designed to stir a sense of seclusion and perhaps even a little intrigue. “Ideally, you’re so taken by actually having to drive through the house that you’ve forgotten about the views you were admiring on your way up,” Locati explains. “Just getting to the front door is an experience.”

A path lined with aspens and dogwoods leads to the front entry, which opens onto a curved breezeway lined with glass accordion doors. At that point, you are immediately reacquainted with the mountains. From the generous covered patio, the vista unfolds a little more. And as you venture further out to the fire pit, the sky quite literally becomes the limit—an impressive canvas for soaring eagles and gathering storm clouds.

“There is a constant sense of rediscovery here,” Locati says. To wit, his architectural craft emerges in details that may initially take a backseat to that all-encompassing view. But in time, the subtle texture imparted by the corrugated-metal roofing, a nod to the barns of yesteryear, is revealed. The stylistic link between the metal bands that modernize the reclaimed wood doors and the occasional metal slats dressing up the chestnut floors is also typically a belated revelation. The inside-out siding characterizing the exterior of the wife’s art studio takes its cues from the structure of old grain silos, while the interior reads, Locati says, “like a New York City loft,” complete with concrete floors and glass garage doors that roll up to invite in the breeze. “New ideas and old materials—or vice versa—is the real magic of this place,” Locati says. “But don’t tell the mountains.” 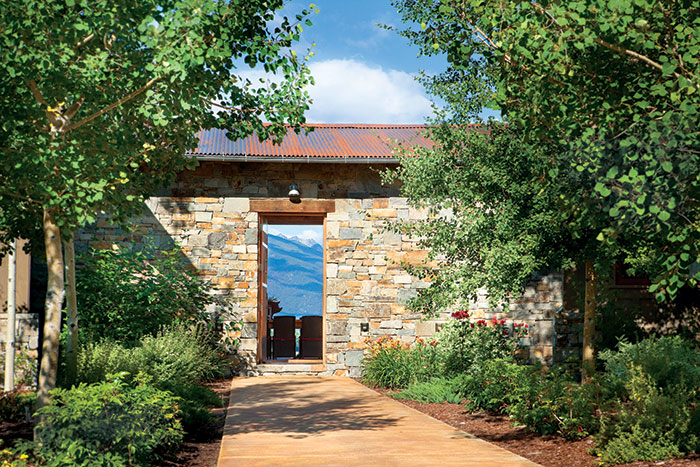 Melding the homeowners’ style with traditional mountain materials, the contemporary architecture gains its warmth from rustic rock and wood. Chief Cliff stone from nearby Kalispell surrounds the front door, creating a solid wall that belies the openness beyond. 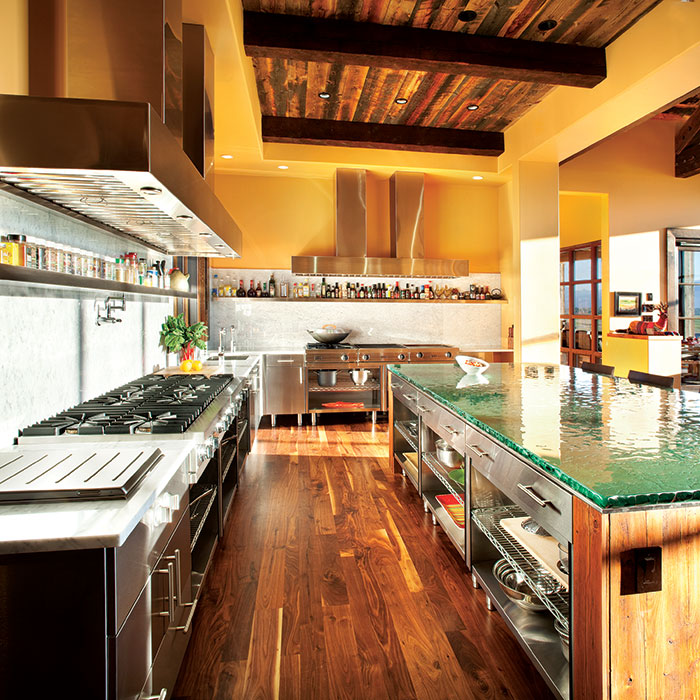 From the reclaimed fir ceilings to the bubbled-glass countertop to the stainless-steel appliances, the interplay between old and new, modern and rustic, is in full effect in the kitchen. Designed with serious cooking in mind, its stainless-steel cupboards and drawers, open shelving and wide, gleaming hoods give the space the feel of a commercial kitchen. 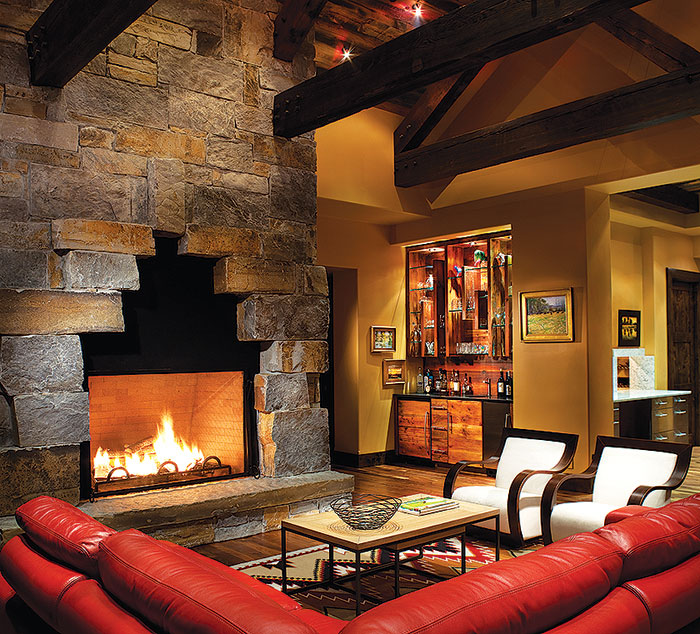 To bring down the scale of the great room, Locati added roof trusses made of recycled timbers. The design of the Chief Cliff stone on the floor-to-ceiling fireplace nods to a classic Native American motif. 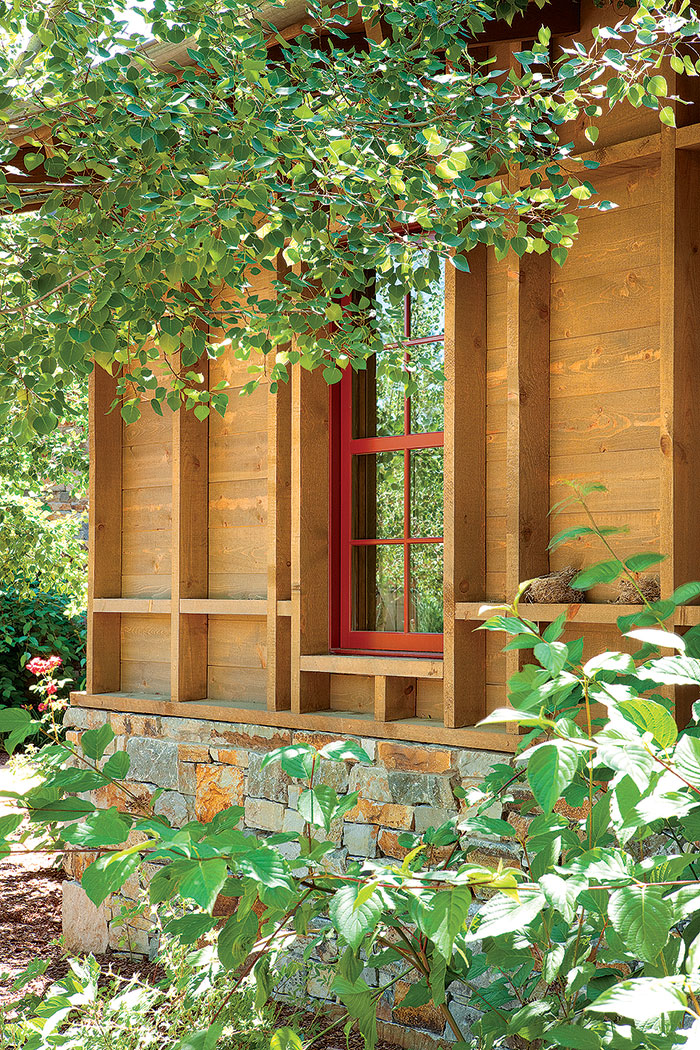 The art studio’s reverse siding is a nod to the grain silos of yesteryear. 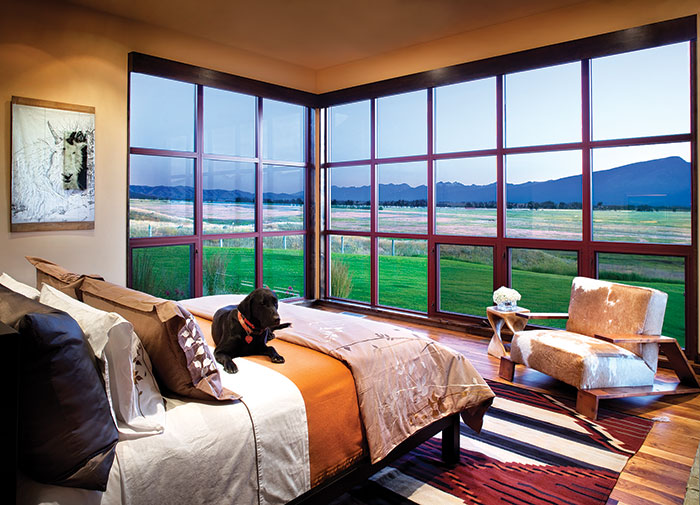 A wall of glass showcases the view from the master bedroom. 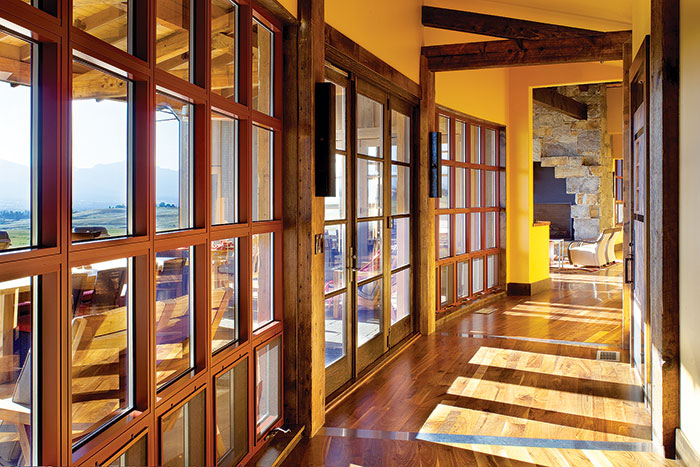 Beyond the breezeway’s glass accordion doors is a covered patio and the homeowners’ prized view of the mountains. 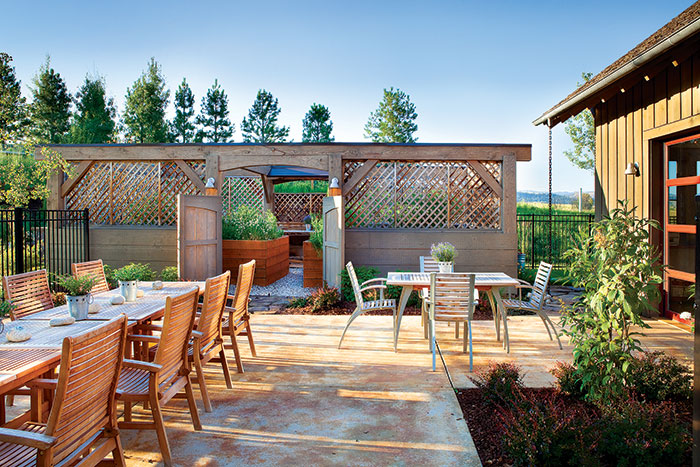 In the vegetable garden, raised beds ensure that the owners don’t have to bend down to harvest tomatoes, artichokes or basil. 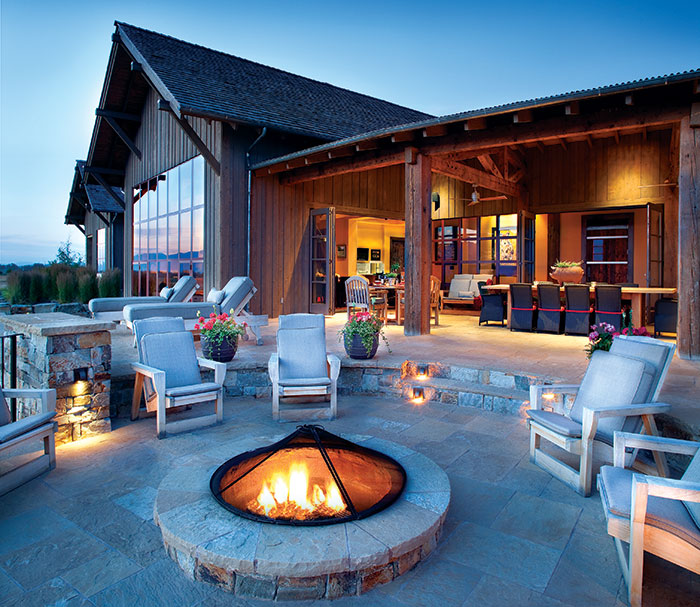 The homeowners enjoy a seamless indoor-outdoor experience, thanks to over-sized windows and glass accordion doors. The heart of the home is arguably outside on the back patio, where the couple hosts family and friends for summer holiday celebrations. Each Fourth of July, against the backdrop of the Bitterroot Mountains, fireworks light up the sky. 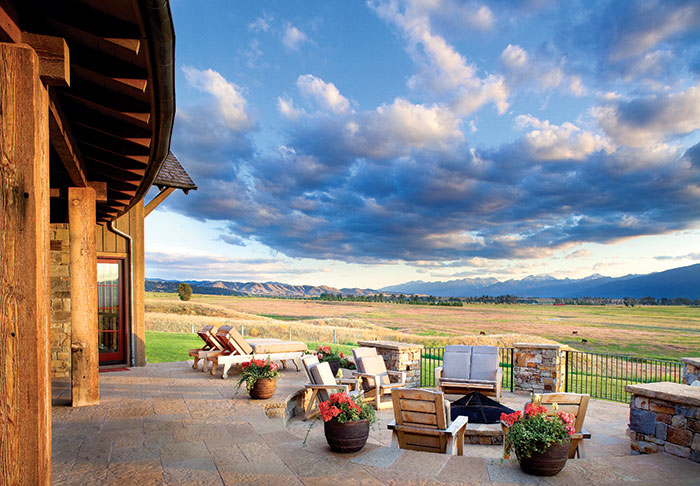 The back patio, paved in a local fieldstone, faces southwest toward the Bitterroot Mountains. A deep overhang crafted from reclaimed fir provides shade. Further out, a fire pit encourages evening powwows; its sunken location ensures that those enjoying the hearth don’t block the view for anyone on the upper deck.

SEE ALSO:
A Montana Farmhouse Made of Glass
This Ridge-Top House Has Points of View
A Blurred Line Between Indoor and Outdoor Living