A Home for Lovers of Architecture and Nature 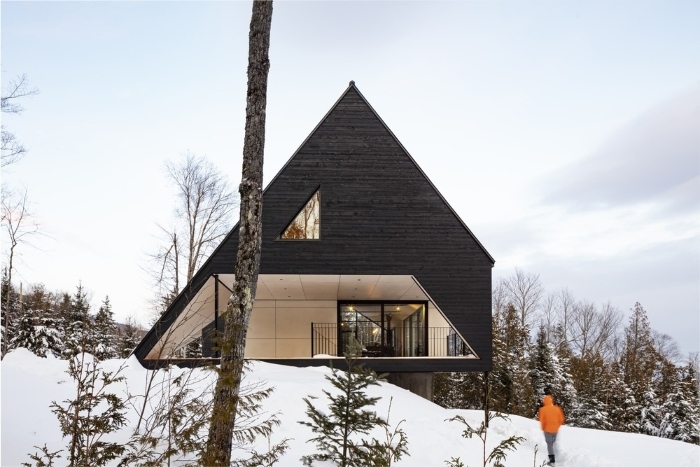 A major tourist attraction for well over a century, the Charlevoix region features some of Québec’s most striking landscapes. Over the last fifteen years, with the opening of a new ski resort, this already popular spot became a year-round destination. 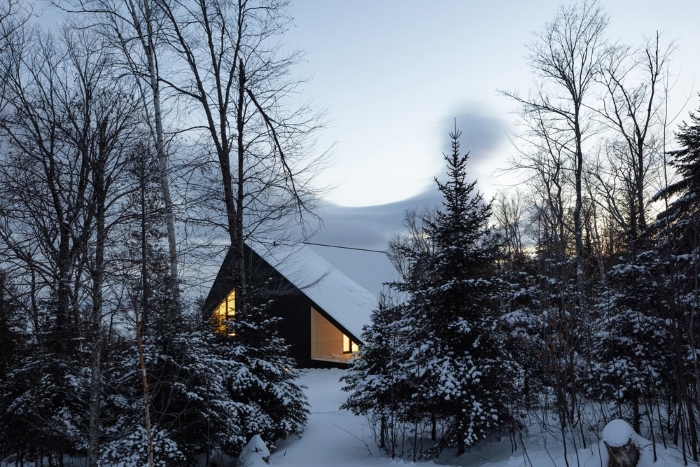 A newcomer on the scene, Cabin A quietly opened its doors in December 2019 as it welcomed its first guests. Located 20 minutes from Le Massif ski resort, this unusual cabin stands on a steep site overlooking the nearby St Lawrence River. 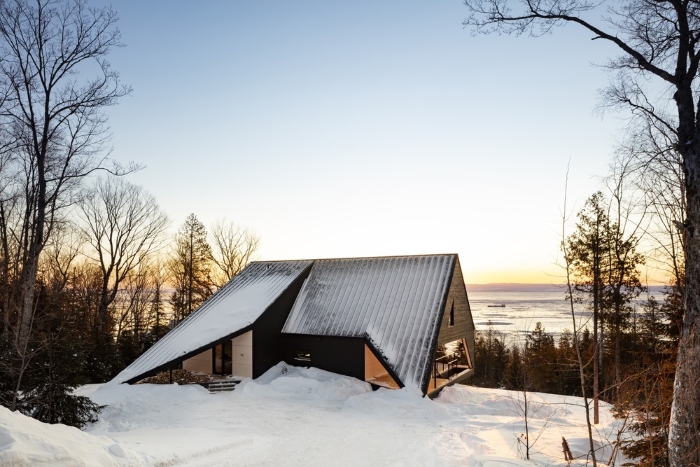 Looking for a source of inspiration, the design team composed of architects and graphic artists turned to the International Code of Signals (ICS), long used in nautical communications. While the Alfa signal determined the building’s overall geometry, subtle references to naval architecture were introduced throughout. 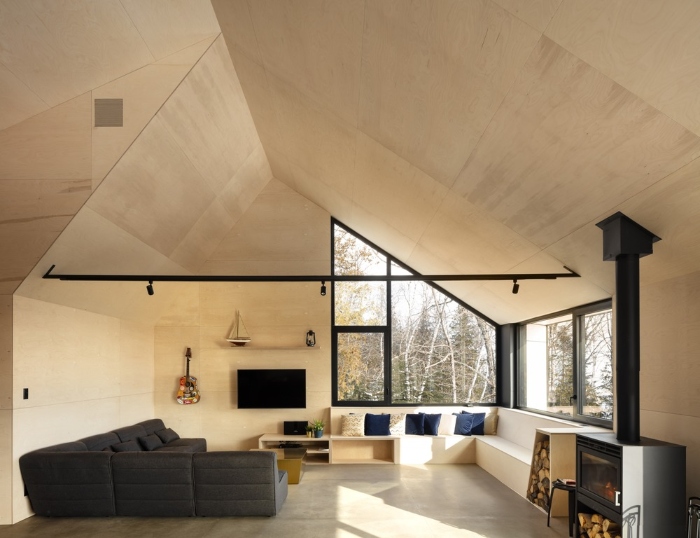 The cabin’s triangulated roof is a reminder of sails facing the wind whereas a large wood terrace evokes the upper deck of a ship with stunning views of the river. The use of wood paneling on the walls and ceiling of the shared living area further emphasize the analogy to naval architecture. 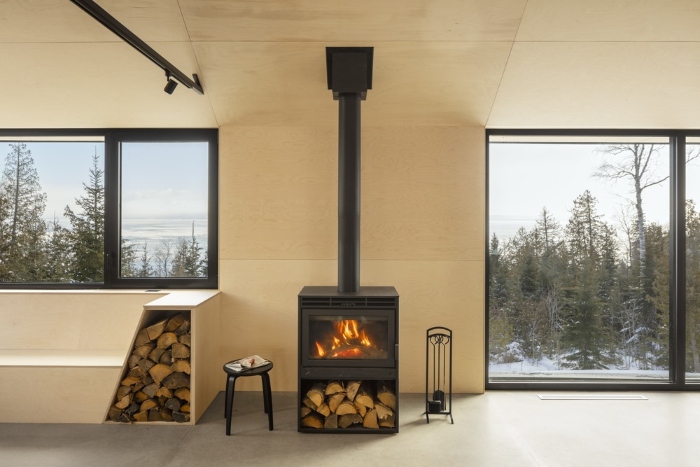 The main entrance is located under one the roof’s sloping wings, the left leg of the letter “A”. The shared living space is a long viewing gallery providing 180-degree views of the St. Lawrence River. 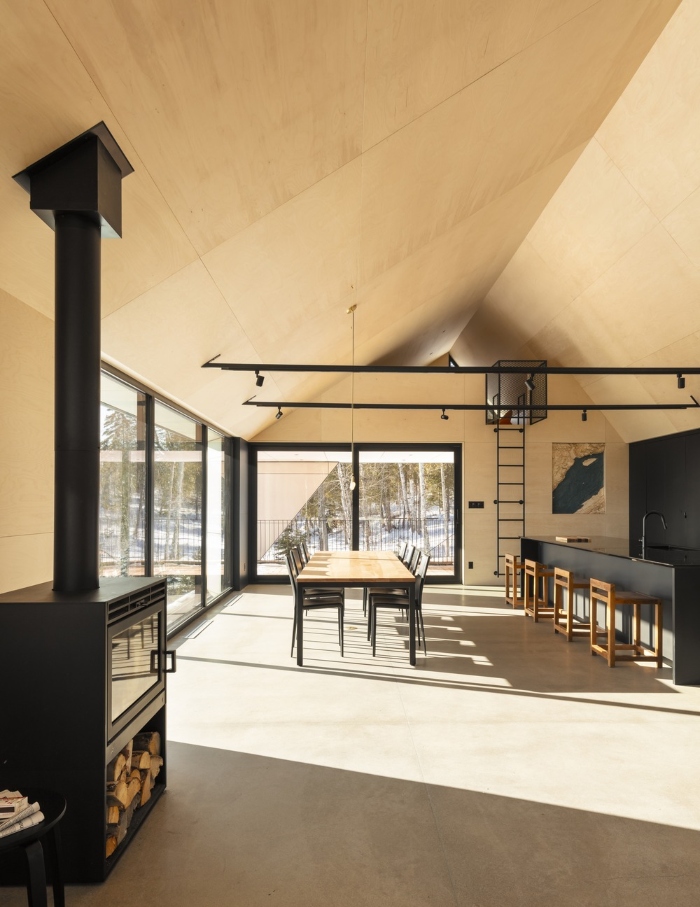 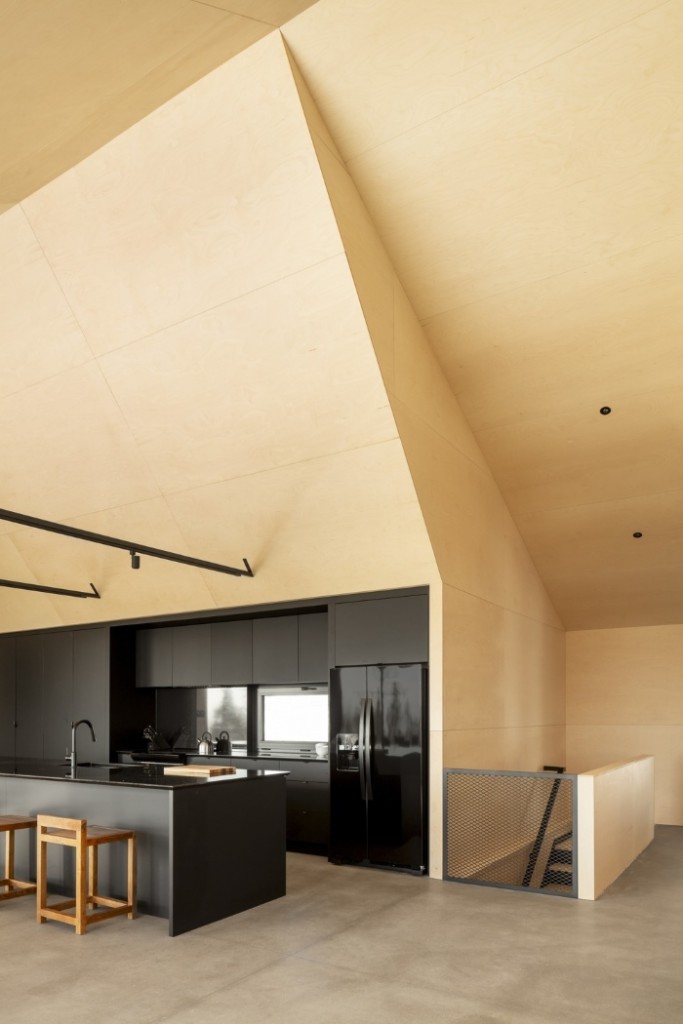 Meant to accommodate groups of up to 12 people, complete kitchen facilities are provided as well as a sitting area and a dining space, which extends outside, weather permitting. 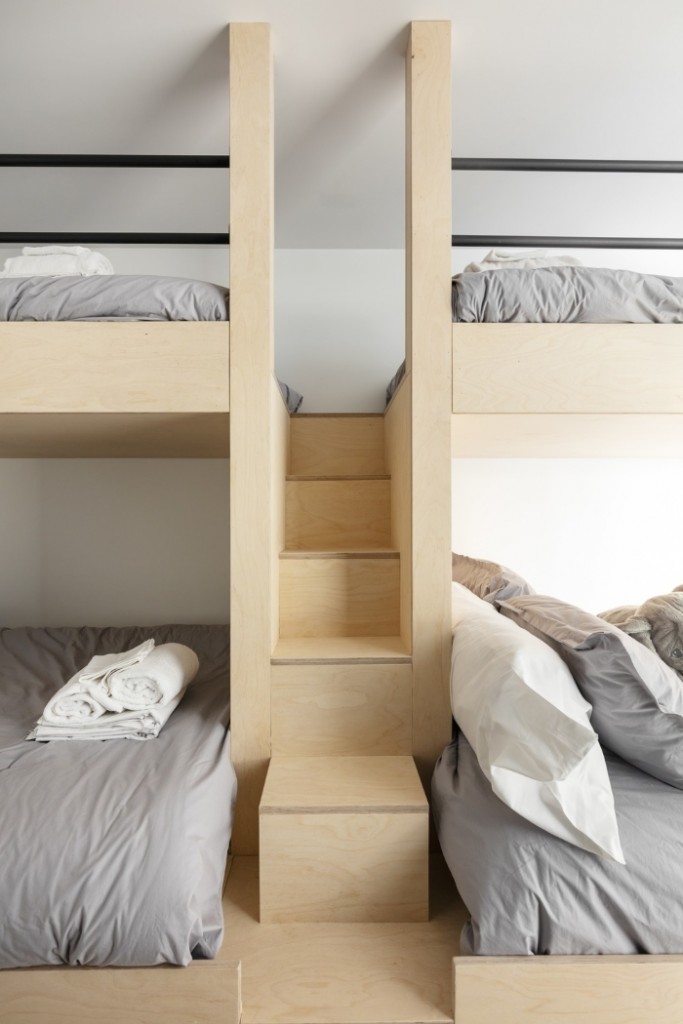 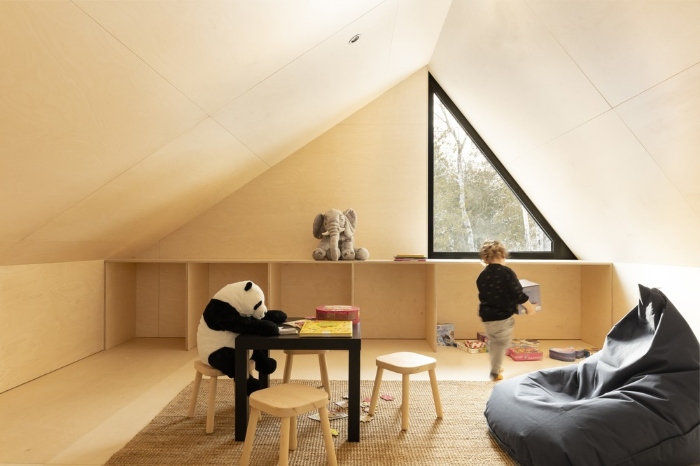 A staircase off the entrance door leads to the partially buried lower level. Three bedrooms and an open dorm for children provide ample sleeping accommodation. A central playroom gives access to a protected spa area, located directly under the ground floor’s deck. 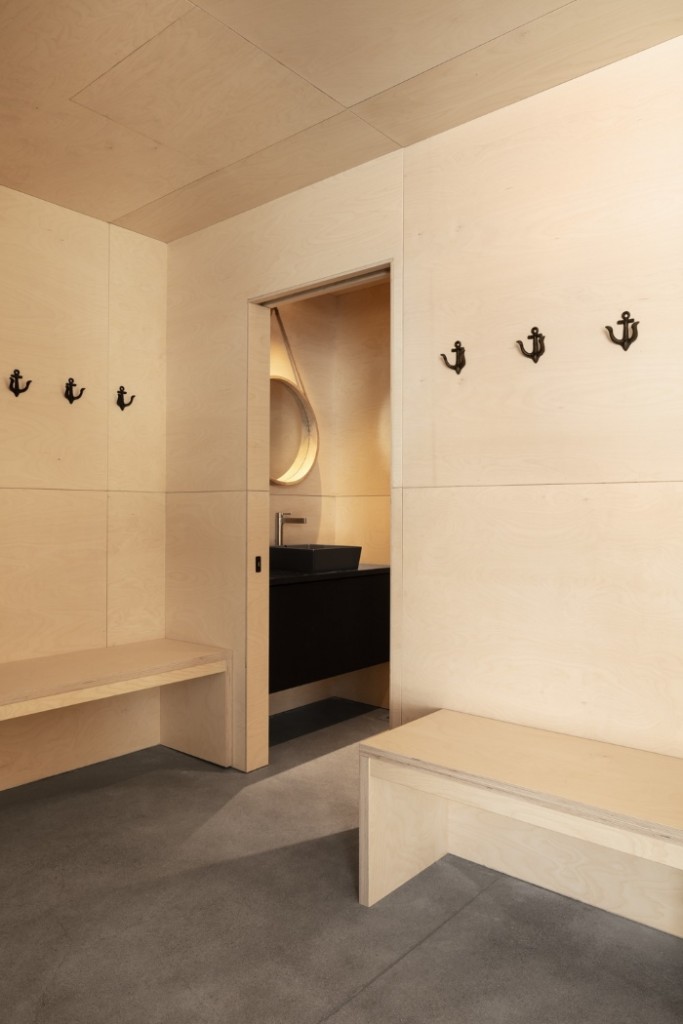 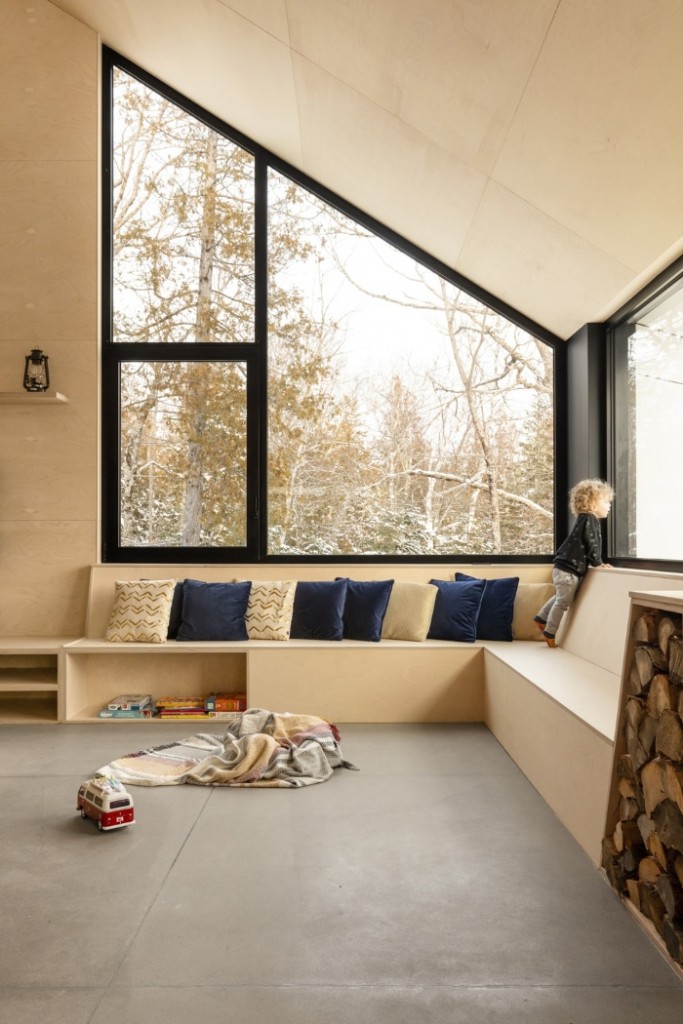 The double-height living/dining/viewing room is clad with Russian plywood panels, also used for the built-in furniture. The light-color birch panels, extended to the outside, contrast sharply with the dark hues of the metal roof and the exterior walls’ cladding. 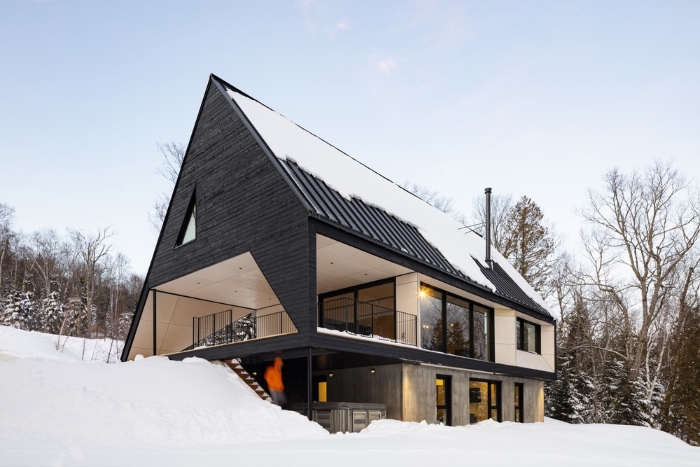 Cabin A is the second tourist-oriented project designed by Bourgeois / Lechasseur for the region. Inaugurated in 2018, Dômes Charlevoix was their first attempt at redefining tourist accommodation. It sparked widespread interest on their work and on their ability to address traditional commissions in an innovative way.

6 Amazing Treehouses You Can Rent in 2021

Before: Pure Cowboy | After: Urbane Contemporary

This Hotel Redefines Luxury in Telluride

Aprés All Day in a Winter Wonderland Globe