The House Musics Series in Aspen

Join us on July 13, 2016 in Aspen, Colorado for the House Musics Series presented by Mountain Living. Hosted at a spectacular private residence with light refreshments, enjoy a "salon" concert experience with star singers from the Aspen Opera Center performing favorite arias and songs from the classical and popular repertoire.

The 2016 summer season will explore the uses of dance form in music. In addition to this overarching theme, the season will include three “mini festivals” on the music of mid-twentieth-century American symphonists; Shakespeare in music, recognizing the Bard’s anniversary; and music from the Nordic region in a set of concerts “White Nights.” 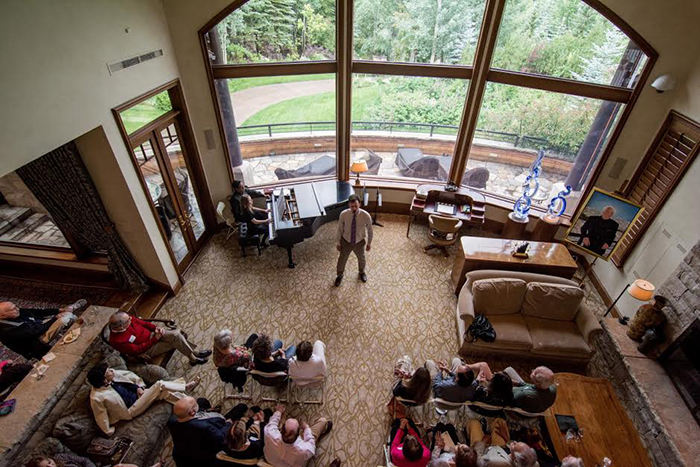 2015 Opera House Music at the home of Alex Kaufman, featuring singers from the Aspen Opera Center

The summer of 2016 will also feature highlights of brilliant orchestral repertoire, including the music of Beethoven, Debussy, Berlioz, Ginastera, Schubert, Schumann, Stravinsky, Wagner, Weber and Tchaikovsky.

The Aspen Music Festival and School, founded in 1949, is regarded as one of the top classical music festivals in the nation, noted both for its concert programming and its musical training of mostly young-adult music students. The typical eight-week summer season includes more than 300 classical music events—including concerts by five orchestras, solo and chamber music performances, fully staged opera productions, master classes, lectures, and children’s programming—and brings in 70,000 audience members. In the winter, the AMFS presents a small series of recitals and Metropolitan Opera Live in HD screenings.

Don’t miss your chance to experience Opera music in an intimate setting at the 2016 House Musics Series presented by Mountain Living. It’ll be an unforgettable event! Click here for tickets!

How Neltje Dances With Color

A Home Inspired by Craftsman-Style Architecture With a Mountain Twist

The Rustic Farmhouse of Their Dreams