A new book offers inspiration for creating the perfect kitchen for every house, modern or classic, rustic or refined 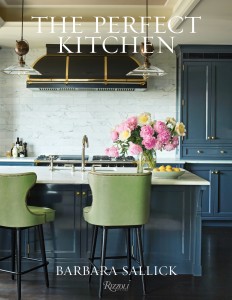 Barbara Sallick knows a thing or two about making a beautiful kitchen. Since co-founding Waterworks luxury kitchen and bath showrooms more than four decades ago, the design icon has built a well-deserved reputation as a source of design inspiration. Her newest book, The Perfect Kitchen (Rizzoli), features kitchens all across the country, including those in a trio of Wyoming homes curated by Jackson-based WRJ Design. We checked in with Sallick to get a few tips on cooking up a beautiful kitchen. 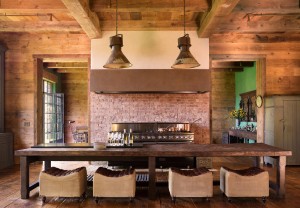 To create a rustic look, this kitchen uses exposed brick as a backsplash behind the stove, wood walls and beams, and details like pendant lights above the bunkhouse table that are as rusted as nails. Saddle-style stools complement the style. | Photo by Durston Saylor

What do homeowners need to consider when designing a kitchen in a mountain home?

It’s really more about the architecture of your house than where you live. If you have a rustic mountainside home, you don’t want a cottage-style kitchen. And if you have a modern house, a rustic kitchen won’t feel right. It’s important to have consistent design throughout the house, no matter what you see out the windows. 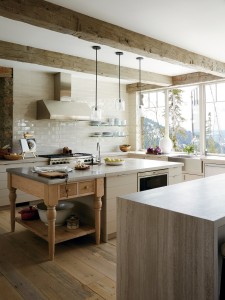 A Jackson Hole house by WRJ Design takes an eclectic approach while honoring the location. The cabinets, backsplash and range hood all have a clean contemporary feel, but the ceiling beams and the European table next to the island add a rustic touch. | Photo by William Abranowicz

How has kitchen design changed in the four decades since you founded Waterworks?

Kitchens weren’t really designed at one time. My grandmother’s kitchen wasn’t beautiful, but somehow the most beautiful food came out of it. In the past 15 or 20 years, as entertaining became less formal and everyone started hanging in the kitchen, we began to think of the kitchen as more of a family hub. It’s not just for cooking; it’s the media center, the homework space, a gathering spot, a multifunctional space. First people realized they needed bigger kitchens, and then they began to want the kitchen to be as beautiful as the rest of the house. 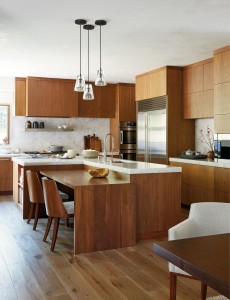 The materials in this contemporary Jackson Hole home by WRJ Design speak to its surroundings, designer Barbara Sallick notes. “It’s a modern mountain house,” she says. “The beautiful wood floor, cabinetry and furniture align with the landscape outside, bringing nature indoors.” | Photo by William Abranowicz

Any advice about design details for people contemplating a new kitchen?

The backsplash is always a difficult decision, but I’d encourage people not to default to white. There are so many neutral colors that work well—navy blue, for example.

Pay attention to the hardware, too, the cabinet and drawer pulls. Think of the kitchen as the little black dress and the hardware as the jewelry that really makes the look. And lighting: That is so important. Add more lighting than you think you need and install dimmers to control it.

What’s the biggest mistake people make in designing their kitchens?

Working by themselves! A kitchen is such an investment, you should have a team of experts: An architect, a designer and a contractor. The architect is good at laying things out precisely, the designer knows how to layer materials so it looks beautiful, and if you don’t have a good contractor, you might as well not have the other two.

A New Office for HGTV’s 2021 Designer of the Year