A painterly past, expertise in the wellness space and an innate sense of style and restraint have allowed interior designer Susie Hoffmann to make a name for herself in Big Sky—and beyond 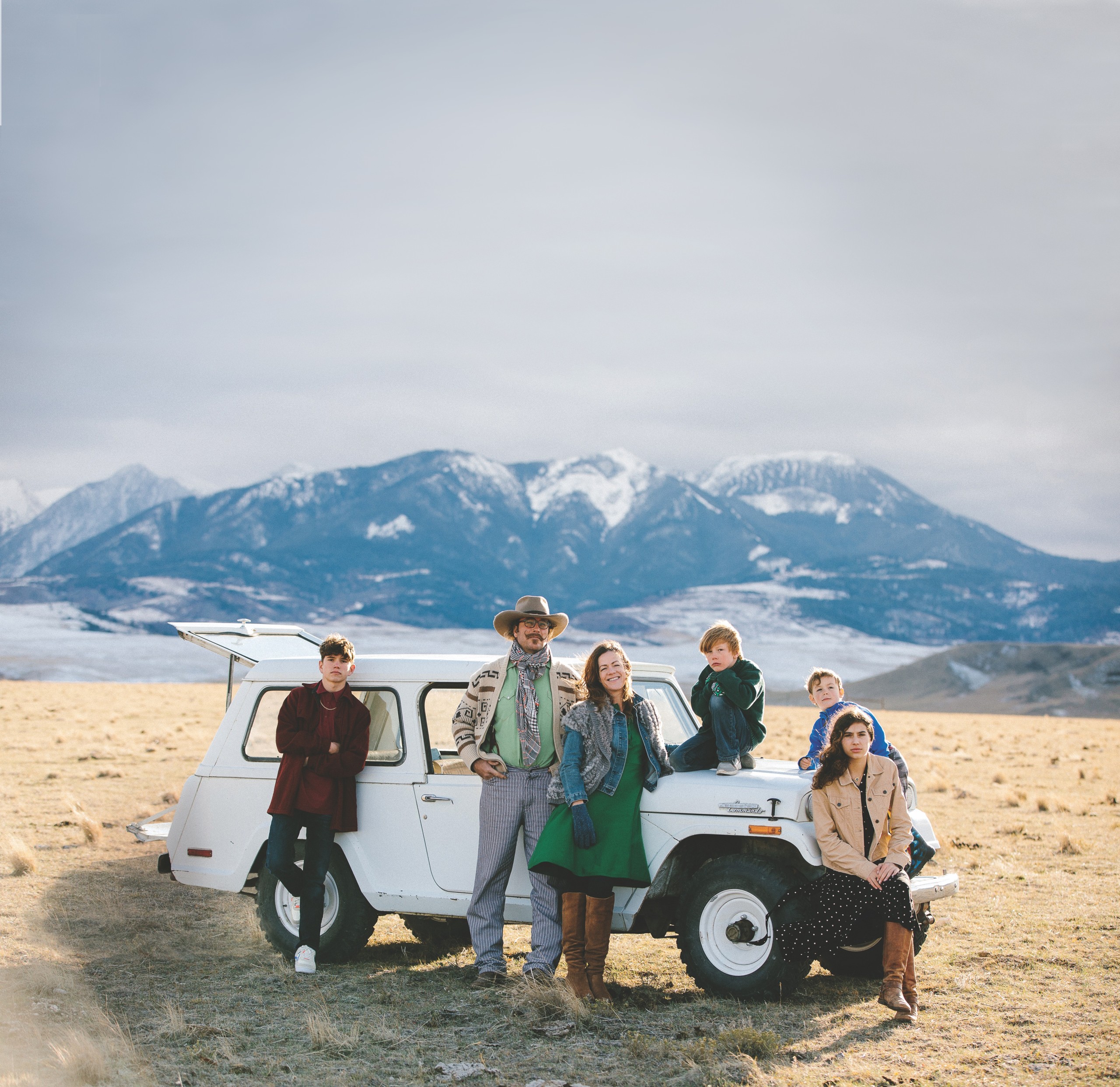 When designer Susie Hoffmann takes five from her Bozeman office, she joins her husband and four children for camping, fishing and tending to animals on their ranch just outside of town. | Photo by Nicole Wickens, Green Door Photography

Many notable artists have found inspiration living in Montana—Theodore Waddell, Kevin Red Star and Andrea Joyce Heimer, to name but a few—but Susie Hoffmann never planned to become one of them. Back when the interior designer was a kid growing up in the Boston suburbs, her paintings and drawings were more influenced by Deutschland than the Treasure State. “My opa was a German furniture builder, woodworker and an artist. 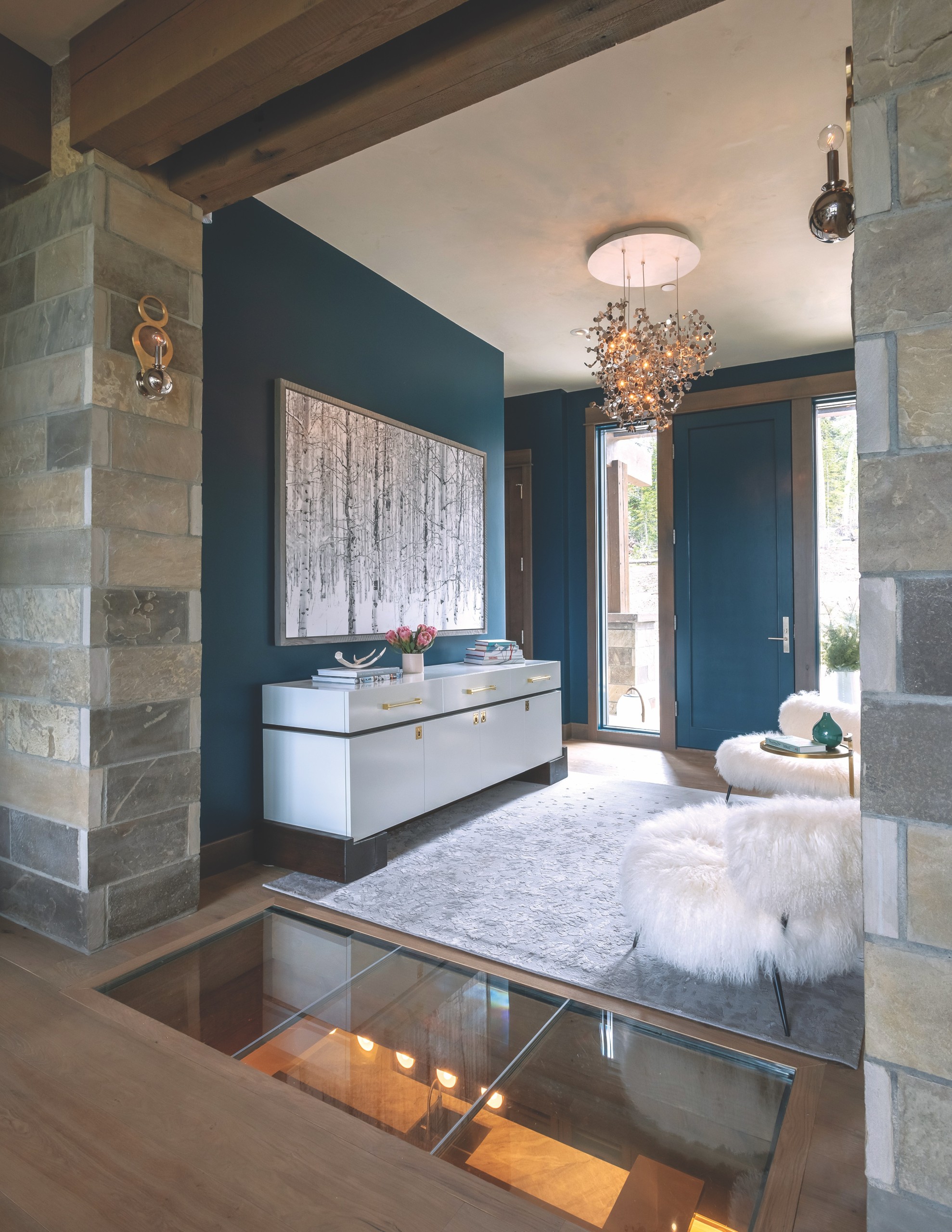 Visitors have a unique experience as soon as they enter this mountain getaway thanks to walls in “Moscow Midnight” by Sherwin Williams, Mongolian sheep wool-covered chairs, a custom console by Envi and floor space that shows off the bunk room down below. | Photo by Audrey Hall

The pages of his notebooks could have been pulled from my own. We both drew with ink, and our landscapes and buildings were strikingly similar,” Hoffmann says. On summer visits to Germany, she couldn’t get enough of the structures designed by her uncle, a renowned architect in the Bauhaus movement. “Being exposed to his work as a little kid was so exciting. I really believe that things like creativity, eye, understanding of space and attention to detail are genetic. They can absolutely be passed along.” 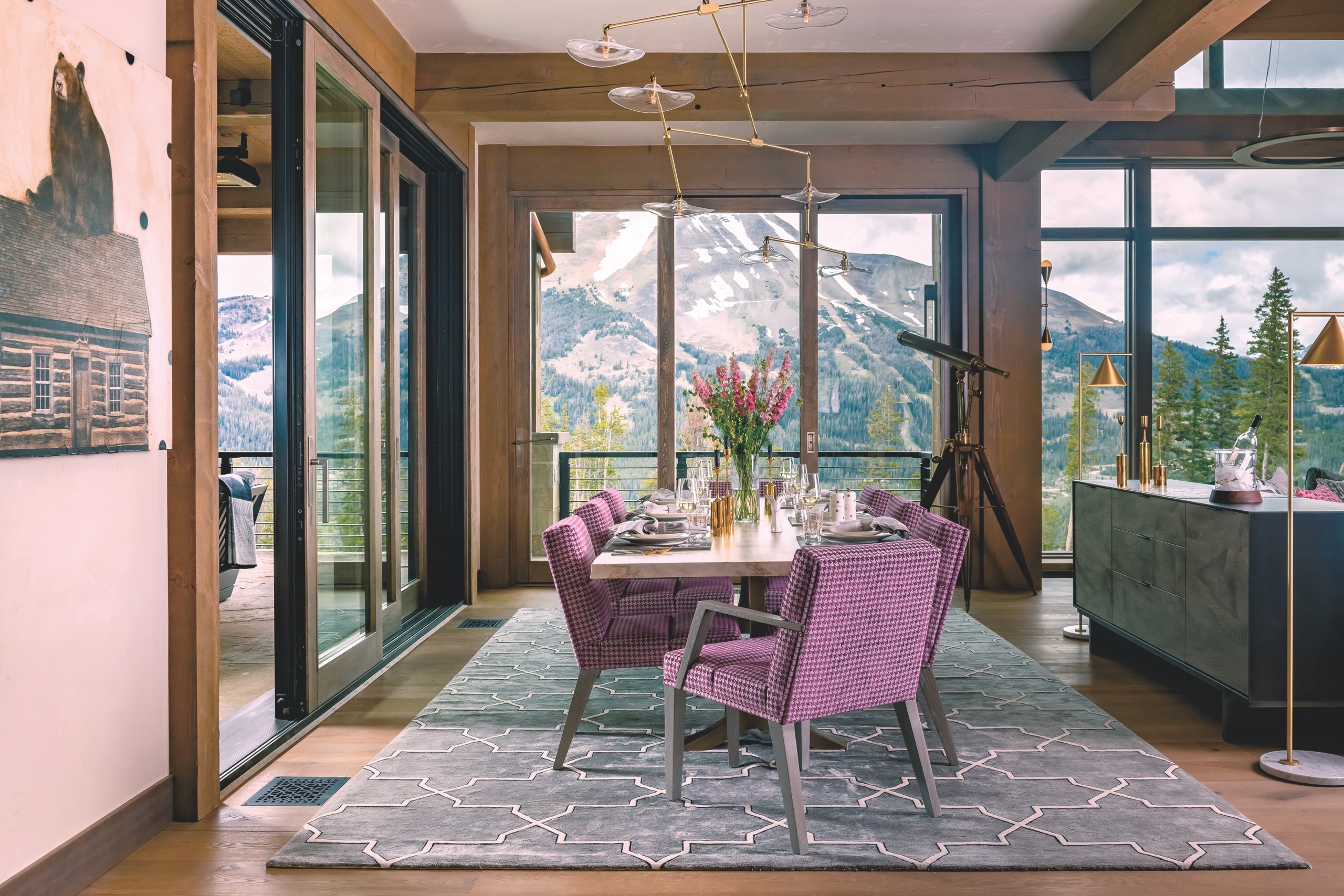 Hoffmann added to the impressive views in a Big Sky dining room with luxe touches including colorful Romo upholstery on the chairs, a Madeline Weinrib silk rug and the oxidized brass-and-glass John Pomp “Calla” chandelier. | Photo by Audrey Hall

Montana became more top of mind the summer Hoffmann graduated from Stanford. Before starting the interior design program at Parsons, she traveled to Billings to work at her brother’s brewery. “I went with my best friend, and we had the summer of our lives,” she says. “My mom eventually moved out there, too, so for years, when I went ‘home’ for holidays, it was often to Montana. I knew that someday I would end up there.” But first, Hoffmann had business to attend to on the East Coast. 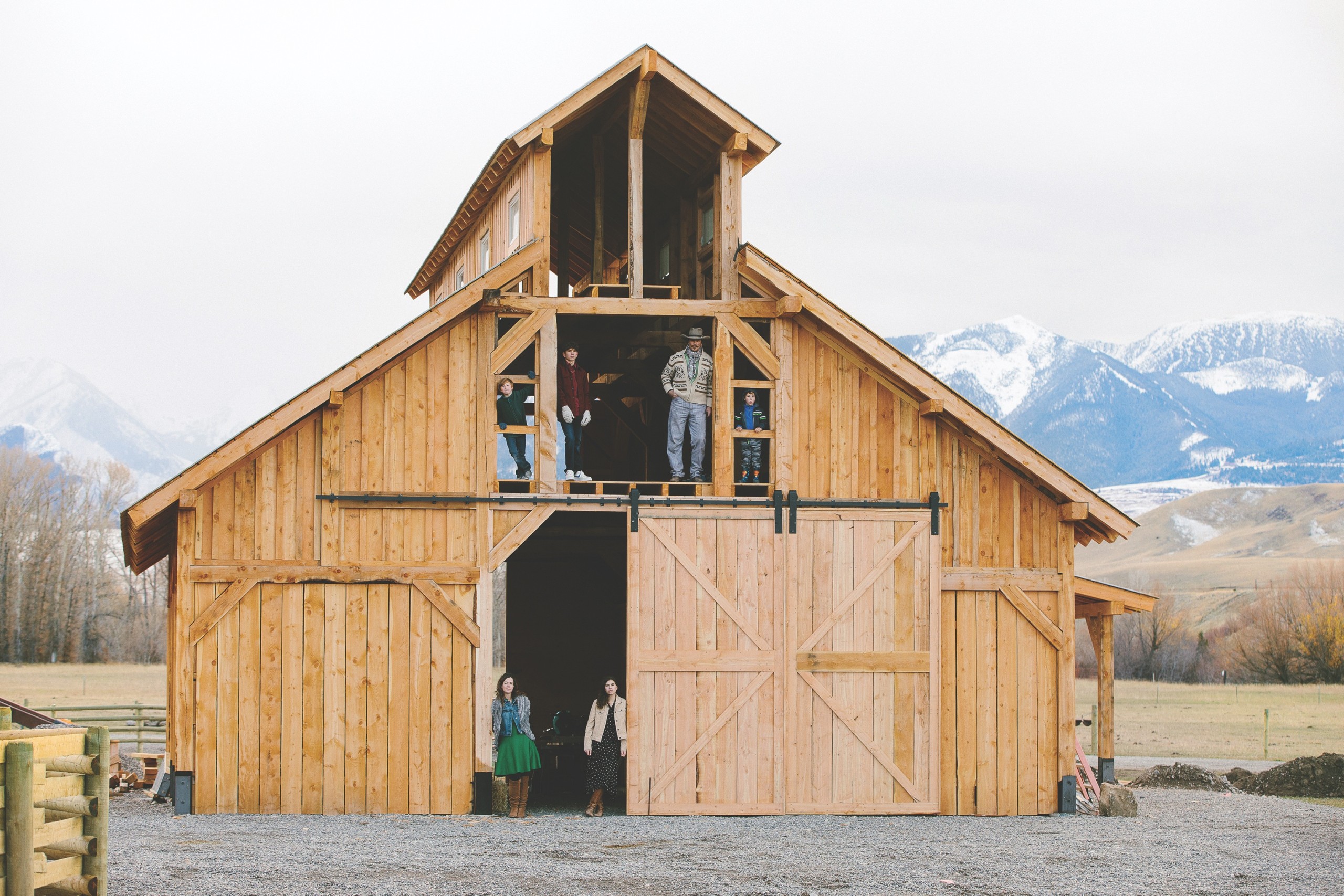 Hoffmann and her family have worked hard to add personal stamps to their land with a pond and a newly raised barn that houses a menagerie of animals. “We’re creating a dynamic property that we’re super excited about,” says the designer. | Photo by Nicole Wickens, Green Door Photography

Once she graduated from Parsons, she joined New York-based Clodagh Design and began building an expertise in taking the concept of wellness to the home. “While I would say my designs lean toward contemporary—I’m looking for purity, simplicity, cleanliness in lines and forms—I also love to add moments that bring contrast. It could be a color or an object—something that feels like a bit of fun,” she says. 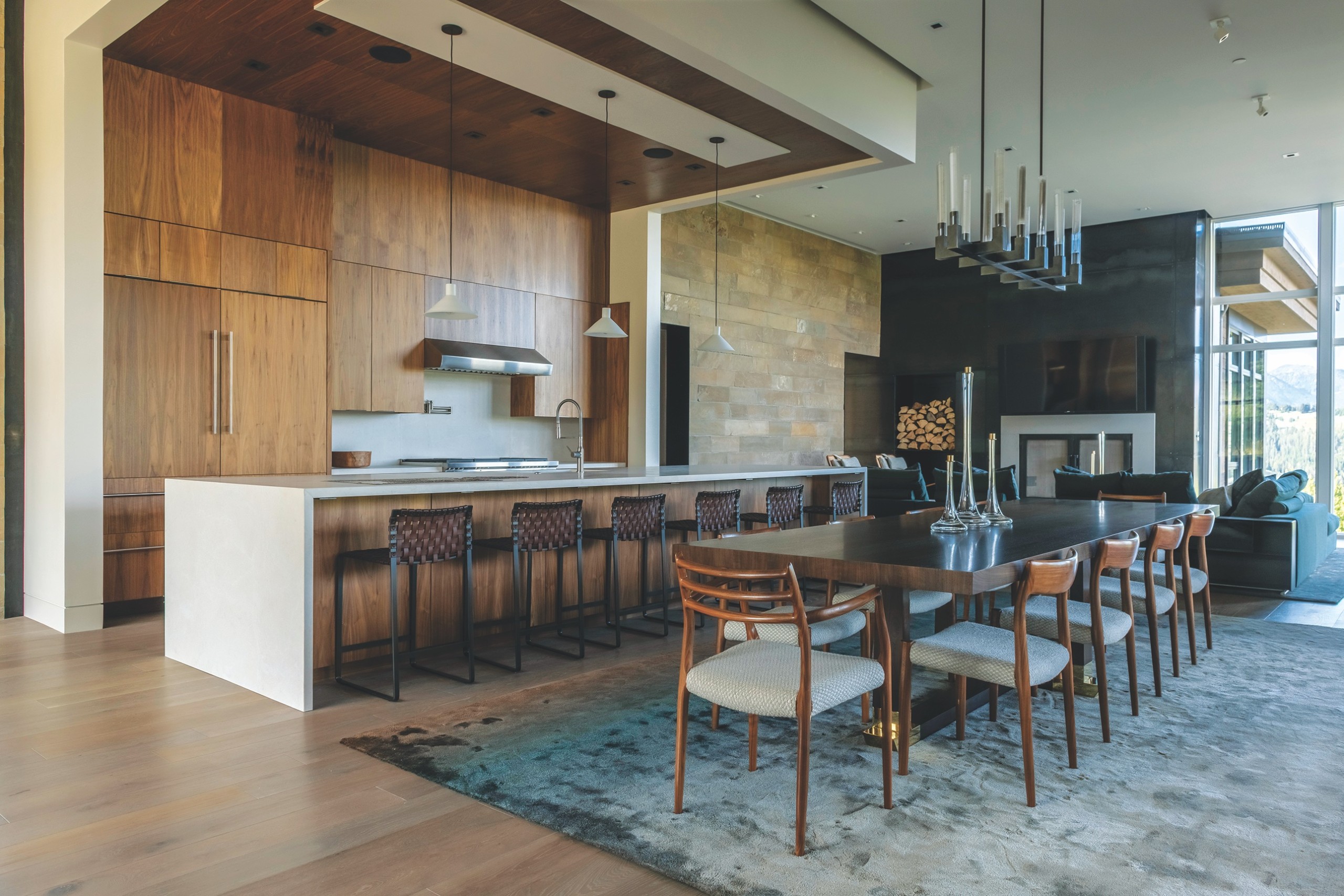 Taking her cues from the sublime surroundings, Hoffmann layered in earth tones and subtle patterns via woolen upholstery, a leather weave on bar stools and a silk rug. | Photo by Audrey Hall

By 2008, Hoffmann was making plans to relocate to New Orleans, when two things happened that forced her to pivot west: Hurricane Katrina and a major recession. She launched Envi Interior Design Studio in Bozeman and held her breath. “It was not a great year for anybody, but I thought if I can survive, that says something,” she says. “I knew right away I wasn’t going to include logs, timbers or anything rustic. My style is more contemporary, but that doesn’t mean it’s not ‘mountain.’” Her gamble—and her luxe approach to minimalism—paid off. Seventeen years later, she has a roster of high-profile commercial and residential clients in Big Sky and around the country. 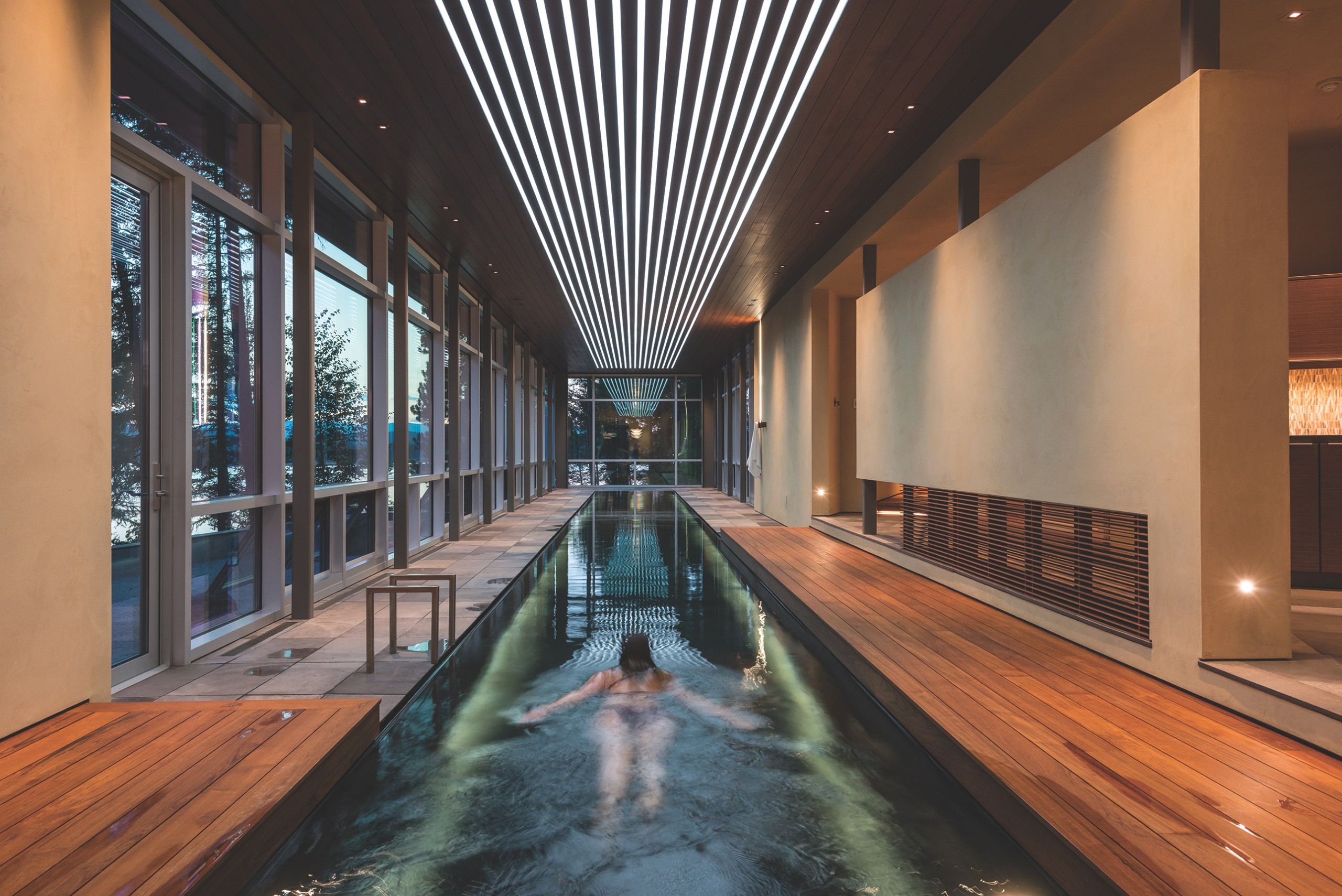 The designer has also found personal happiness on a ranch outside of town with her husband, four kids ranging from ages 15 to 5, horses, donkeys, chickens, cats, dogs and a mule named Major. “I married a cowboy. We met at the Snow Creek, which sounds like a magical spot in nature, but it’s actually a dive bar,” Hoffmann says with a laugh. 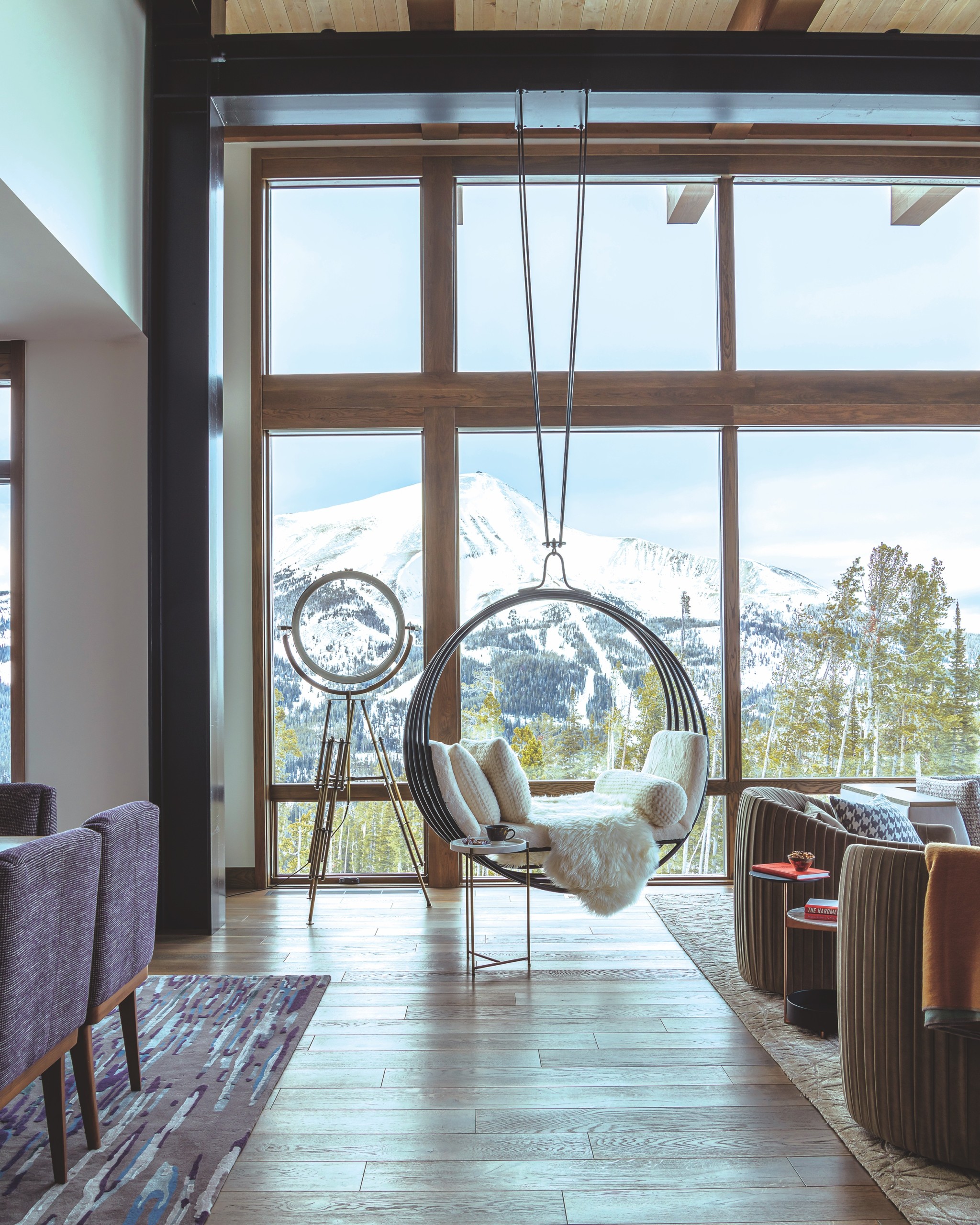 Like many designers, Hoffmann is always looking to achieve balance when it comes to color, texture and lighting in her stunning rooms, but she’s also looking to add fun. Case in point: A well-placed sculptural chair creates a moment that rivals the sights just beyond the windows. | Photo by Audrey Hall

While she still sketches at work, her home on the range has motivated her to grab a brush to take on a purely artistic pursuit. “My husband is a sculptor,” she explains. “We’re building an art studio now, and I’m hoping to carve out a spot so I can get back to painting.”