In the mining town of Creede, Colorado, the homeowners of this humble abode prefer to have next-door neighbors 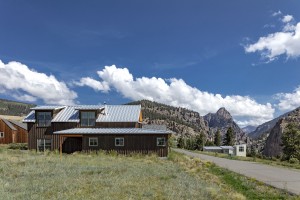 Rather than prioritize expansive acres of land, homeowners and Colorado natives Paul McCumber and Kelly Knight simply want to be a part of a community. When the couple went looking for a mountain home to call their own, they happened across small-town Creede America. McCumber was instantly drawn to the location, so he snapped a photo and sent it to his Architect, Avery Augur of Caldera Design + Build. Almost instantly, they were on the same page. 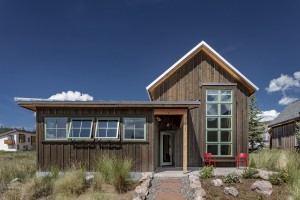 “The downtown area feels like an Old West Town,” says McCumber. “The mountain towns in Colorado can be bustling, I70-style communities with Home Depot and Walmarts or crowded with skiing tourists. Creede is off the beaten path and the town looks and feels like the Old West in every direction.” 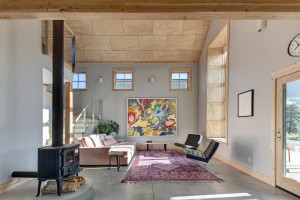 The residence was inspired by regional vernacular, a theme Augur establishes through his architectural design. To create this theme, the siding of the home was built using locally sourced beetle-killed spruce. “I like to get scrappy using off-the-shelf materials,” says Augur. And with a tight budget, Augur had no choice but to get creative. The living room ceiling was crafted using plywood panels, made by cutting a standard 4×8 sheet into four 2×4 pieces and installing them on the ceiling to mimic a subway tile. The surrounding mining townhomes range in size from 850 sq. ft to 3000 sq. ft, keeping things on the modest side, and this residence was no exception. “We wanted the house to be sensitive to the scale of the neighborhood,” explains McCumber. 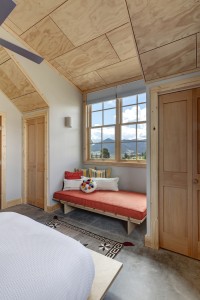 The house itself has a very tightly insulated envelope which is paired with high-efficiency systems. Using cross ventilation and a heat-recovery ventilator, fresh air wafts through the home all year long, even when doors and windows are shut. 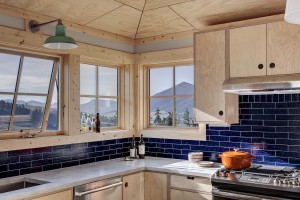 As 96% of the nearby land resides in the county Forest Service, the homeowners have a lot of space to adventure. “The San Juans, the mountain range of which Creede sits on the eastern side, is home to roughly half the mountains in Colorado,” says McCumber. “There are hundreds of peaks and lakes to explore away from the Front Range population areas, you oftentimes have them to yourselves. Aside from the nature, I think what we like the most about Creede is that it has a theater. The Repertory Theatre is highly regarded and makes for a fun summer activity.” 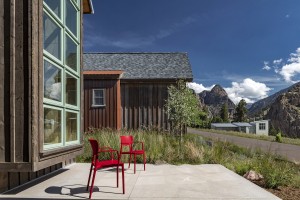 The homeowners spend roughly half of their year in Creede but hope to soon plant roots in the community, making it their primary residence.