Denver-based interior designer Andrea Schumacher of O Interior Design pays homage to those interior design greatsâas well as several contemporary style all-starsâwho influence the designs she creates for homes in Colorado and beyond. See Schumacher’s work on the right and the design inspiration on the left.

Great design is all about finding inspiration and looking to those who came before us. We wanted to take some time to celebrate a few great designers from the past, as well as a few of our favorite contemporary designers, from whom we regularly gather inspiration (see our designs on the right!).

Dorothy Draper (above, left): She was quite the mover and shaker among interior designers. The first person ever to establish an interior design company in America in 1923, Draper is known for her bold use of mixed colors and striking patterns. Her legendary design style is known as the âDraper Touch.â She was a major contributor to the design field, writing regular columns for Good Housekeeping and her 1939 book, Decorating Is Fun, which helped make her name a household word.

Sister Parish (above, left) was Dorothy Draper’s cousin and is best known for her work on the Kennedy White House. Her traditional English country house style, incorporating Colefax and Fowler chintzes, overstuffed armchairs and brocade sofas, was paired with American Colonial-style staples such as patchwork quilts, four-poster beds, knitted throws and rag rugs. She is credited as the creator of âAmerican Countryâ style.

Albert Hadley (above, left) is a longstanding pillar of American interior design. He began his career working alongside Sister Parish, though his design sensibility developed into a clean, modern style. Hadley added a modern backbone to a world of traditional chintz. His clients included Al and Tipper Gore, Oscar de la Renta, Jacqueline Kennedy Onassis, Diane Sawyer, the late Mrs. Brooke Astor and the Getty family.

David Hicks (above, left) was born and raised in England and first came to fame after being published in Britainâs House & Garden magazine during the early 1950s. Hicks is best known for combining antiques with modern furnishings and contemporary art, and creating patterned designs specifically for carpet and fabric collections. Throughout his career, he built a substantial list of notable clients around the worldâin Japan, Saudi Arabia, India, France and America. We upholstered the banquette shown above (right) in one of his notable patterned fabrics. 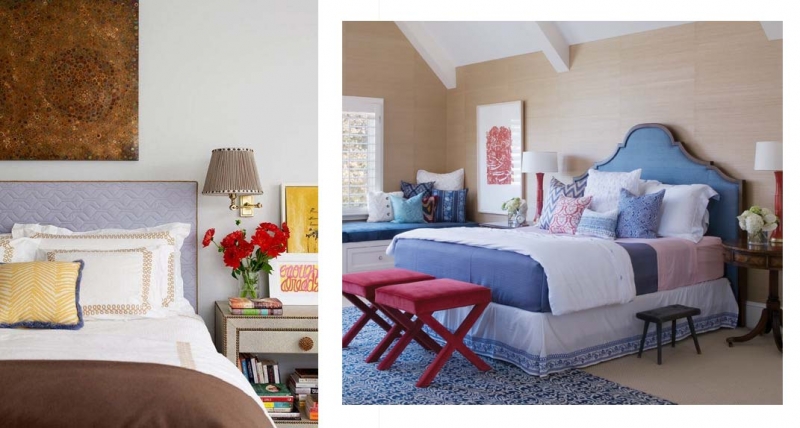 Katie Ridder (above, left) is one of our favorite contemporary designers.Â  She was an editor at both House & Garden and House Beautiful magazines before founding her own New York-based design firm in 1995.Â  She is âknown for her striking balance between style and discretion,â and her projects combine comfort, practicality and sophisticated colors while being mindful of architectural surroundings. Ridderâs secret fetish? Beads! She’s developed her own wallpaper and fabric collections, and continues to design for clients worldwide. We love her work!

For more than 30 years, Jamie Drake (above, left) has been seducing the design world with his dazzling aesthetic that makes use of confident applications of unexpected materials. He calls his style âNew American Glamourâ and it’s no wonder why! Drakeâs period projects pay respect to the past through the use of antique pieces combined with lustrous colors, patterns and textures. We absolutely love his sense of color and take a similar approach with our design aesthetic.

This article appears in the September-October 2012 issue of Mountain Living.
Categories: Interior Designers

Why Should I Choose Classic Interior Design Style?