An Aspen Aerie With Stunning Landscapes

It's easy to think of landscape architecture as icing on a cake—a decorative overlay applied only after the house construction is already set. But as savvy homeowners know, to truly make a newly built mountain home feel like it belongs within its rustic setting, it’s wiser to involve the landscape architects as active partners from the get-go.

That’s what happened with this dramatic Aspen aerie, a two-and-one-half-acre parcel acquired by the current owners in 2006. At that point, the site had an older home ready for teardown and a brackish pond and stream, both of which needed draining and re-lining. Shope Reno Wharton—the architecture firm commissioned by the homeowners to design their new five-bedroom family retreat—had worked with Design Workshop, the landscape architecture, planning and urban design firm, on previous projects, so chairman and CEO Kurt Culbertson was invited on to manage what turned into a strikingly ambitious grounds-restoration project. (Indeed, its impressive scale and quality would eventually capture a Merit Award from the Colorado Chapter of the American Society of Landscape Architects.)

“One of the most valuable things we contribute, right at the start, is figuring out where the house should be sited,” says Culbertson. “We also collaborate with the architect to determine how the house should be shaped to enhance the topography and vegetation that’s already there.” 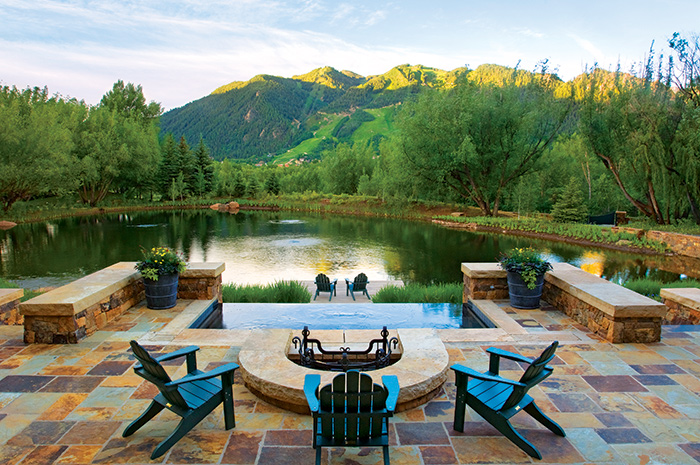 An immediate priority for the designers was to preserve 44 existing globe willow trees, which would lend a sense of stature and permanence to all the new work while also providing much-needed shade. Both the site’s gated entrance and the house’s exterior terrace were essentially reverse-engineered around sets of flanking willows with huge trunks.

While the previous home had been built at ground level, quite near the pond’s northern edge, Culbertson determined the new house should be nestled further back from the pond, in a more sheltered and connected position against the hill that rises steeply to the north. The added space between the refurbished pond and the new house made room for a tiered sandstone terrace complete with fire pit and a picturesque stairway descending from the house to a new dock. A berm added at the property’s south end would hide passing cars, and with the house raised up on a stone promontory base to compensate, it would retain its striking vistas of Aspen Mountain to the south.

From such big-picture thinking, Culbertson plunged into working out the mind-boggling minutiae of enhancing plant life around the property. The number of considerations—growth patterns, climate conditions, how each species interacts with others—made the process a multi-layered chess game. His massive planting lists, worked out in elaborate schematic drawings that specify each placement, are enough to make an amateur gardener’s wheelbarrow buckle: 200 trees, 680 shrubs, and—gulp—just over 5,000 added perennials and groundcover plants.

Says Culbertson with a laugh, “You have to be almost obsessive-compulsive to do this level of work. The devil is in the details.” Maybe so, but the result has a heavenly sense of refuge. 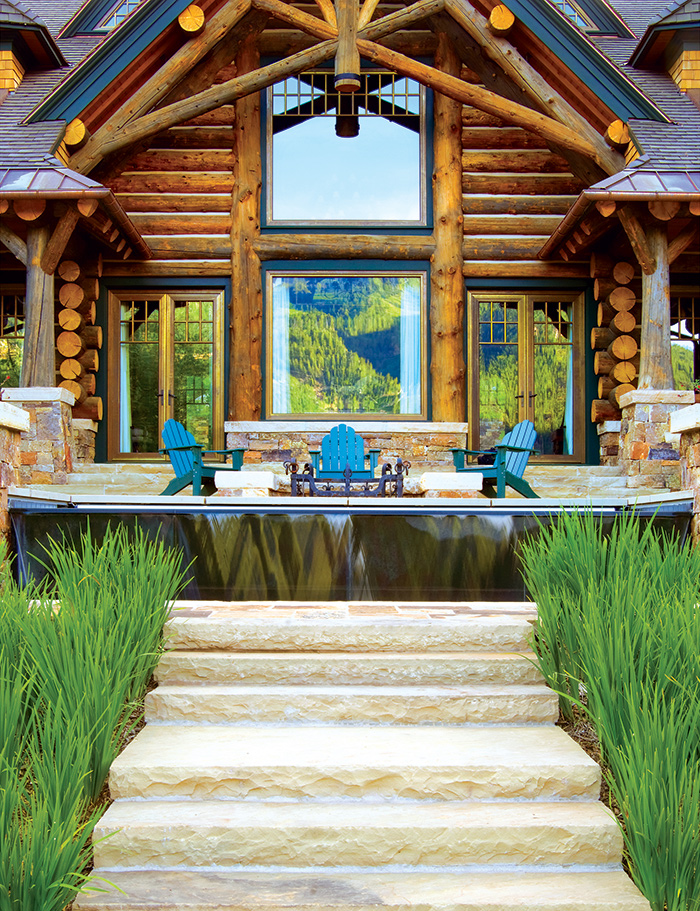 Step out from a great room framed by brass-bordered side doors and two square windows and you’re on a sandstone terrace, enlivened by log walls and plantings of blue Siberian iris. Forest-green Adirondack chairs circle a fire pit and flank an outdoor hot tub, complete with automated retractable cover. 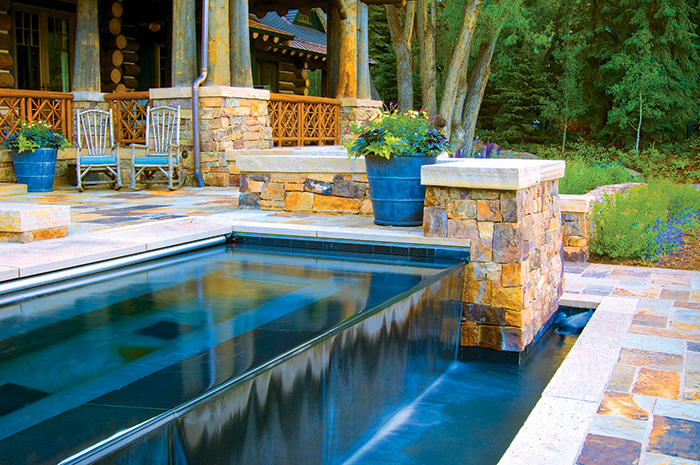 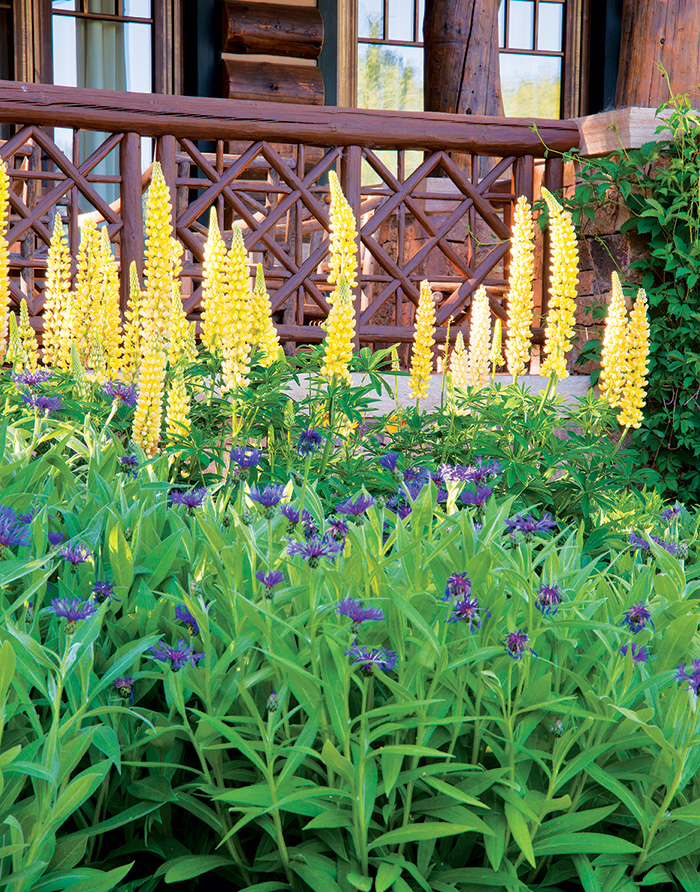 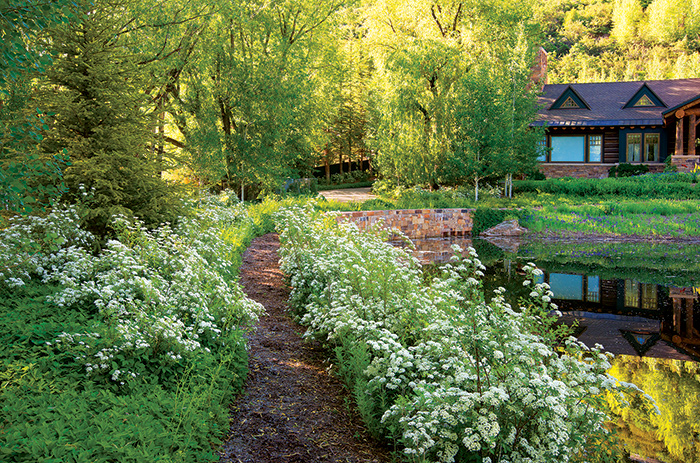 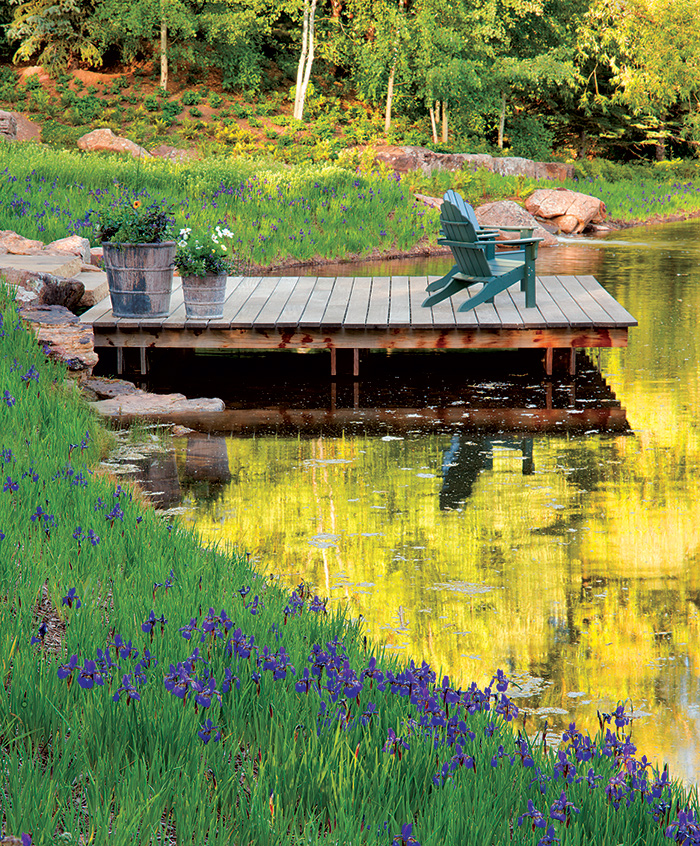 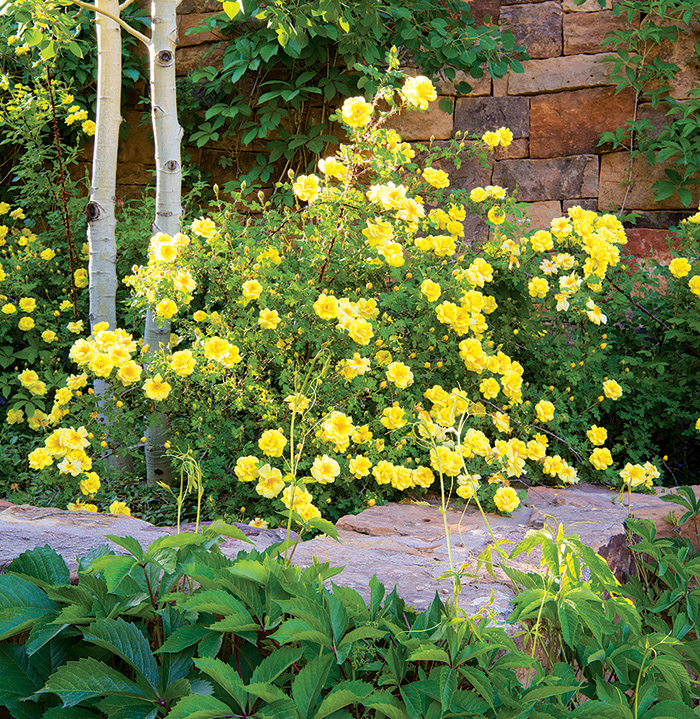 A joyful Harison’s Yellow rose shrub beside a pair of quaking aspen trees. 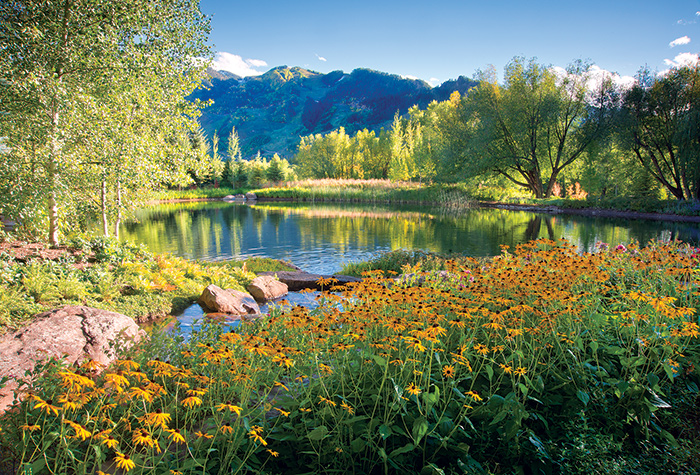 A southward-facing vista shows sprightly black-eyed Susans flanking the point where a stream empties into the pond. 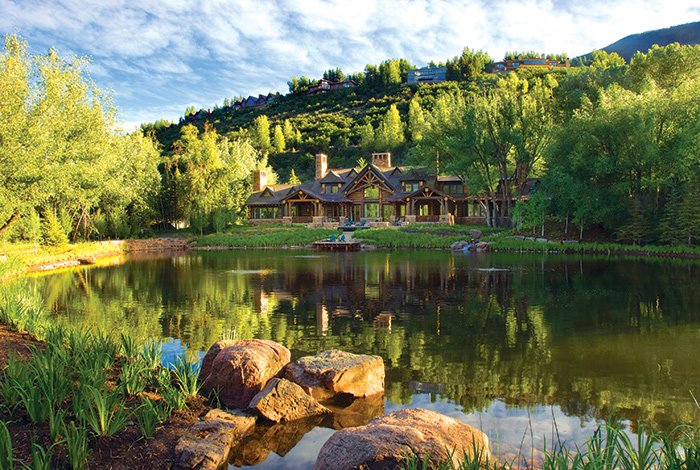 A morning vista from the reverse angle, looking north, shows how dramatically the horizontal homestead hugs the terrain, echoing the shape of the sheltering, aspen-lined hill behind it. The stone outcropping to the right of the dock marks the point where the stream joins the pond, the finale of its meandering journey over multiple small stone waterfalls en route from an irrigation ditch above the house.

WATER WORKS
It looks like a simple, placid pond, but a panoply of cleverly engineered enhancements lie beneath its surface. Here’s a peek behind the curtain.

Safety Shelves: Ponds with steep banks at the edges can be treacherous if a small child or impaired adult wanders near. But this pond has multiple gently sloping “shelves” extending outward from its edges that make the water relatively shallow for a few feet. Of course, that’s no substitute for vigilance in supervising who wanders near. Bonus: The shelving allows bulrushes and other reedy plants, as well as blooming irises, to grow at the edges, and creates conditions hospitable to fingerlings and other small fish.

Rubber Lining: A large membrane spread over the bottom and sides of the pond prevents the water from percolating into the groundwater level and keeps the surface water level constant.

Aeration System: Notice how there are no algae blooms? Not an accident: an aeration system keeps the water circulating and clear.

Beautiful Boulders: Those aren’t just any rocks bordering the pond and the stream. They’re carefully chosen, attractively weathered “lichen rocks” made up of sandstone and harvested from existing sites. Boulders taken straight from a gravel pit wouldn’t have nearly so pretty a patina.

SEE ALSO:
A Home That Feels Like a Houseboat
This Water-Inspired Landscape Design Goes With the Flow
A Dreamy Cabana Makes a Splash in Aspen
We're in Love With These Swimming Pool Designs