The small city is loaded with big creative talent 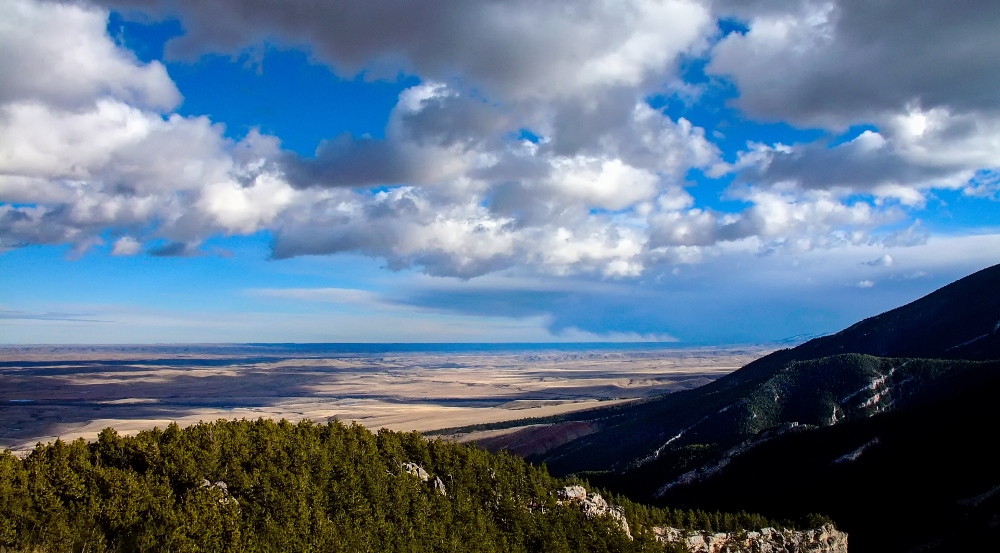 You might not expect to find world-class artists roaming the range in northeast Wyoming. But, with a population under 18,000 and a remote location nestled against the Bighorn Mountains, Sheridan is full of beautiful surprises.

“Sheridan County’s creative arts economy flies under the radar when you consider our status as an outdoor recreation paradise and cowboy town,” Shawn Parker, executive director of Sheridan County Travel and Tourism, says. “The arts scene here is staggering in scope and size.”

What is it about this place that inspires so much creativity? Here, four artists share their Sheridan stories. 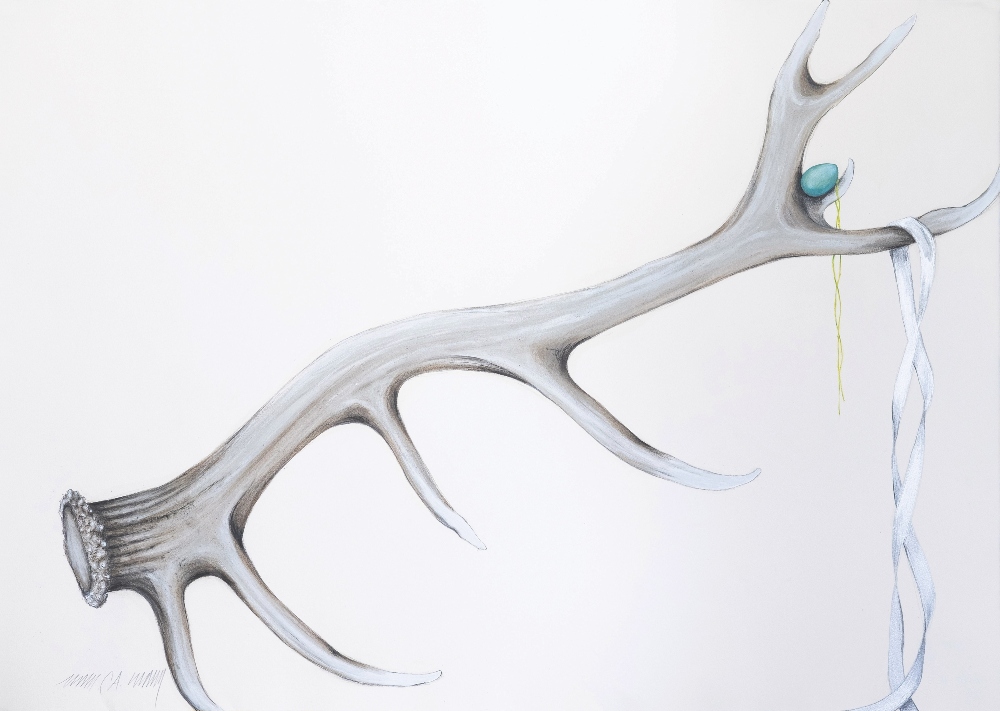 It’s fair to say that Arin Waddell was an artist from birth. The daughter of acclaimed painter and sculptor Theodore Waddell, she made her art-world debut when her father included a black-and-white photo of his new baby girl in his MFA graduate show, a month after she was born. 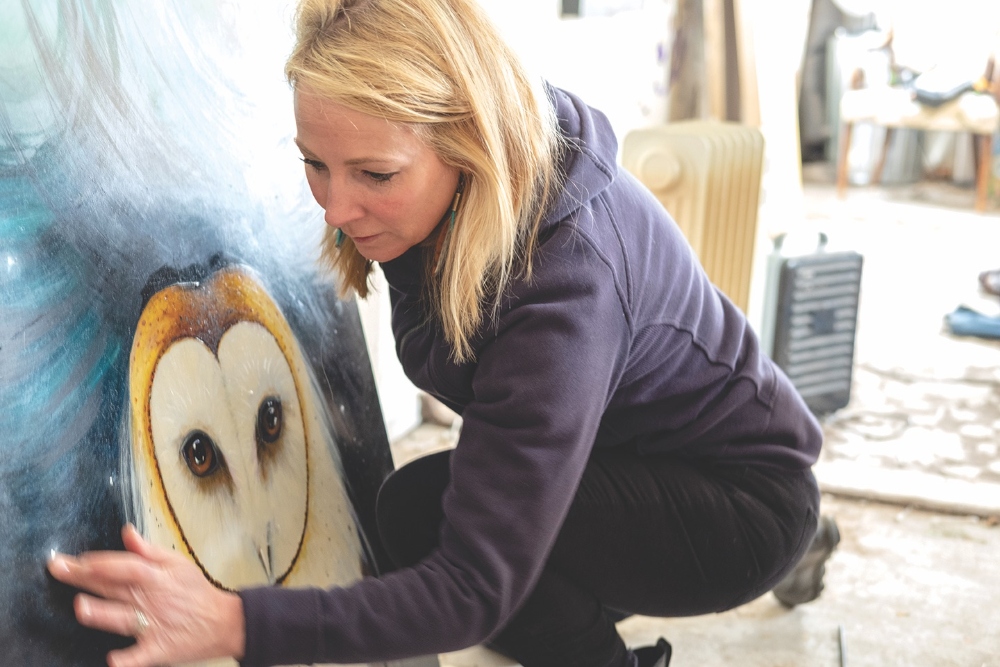 Not surprisingly, Waddell grew up going to museums and surrounded by art, but home was a cattle ranch in Montana, where she developed a deep love for animals. Waddell eventually became an artist herself, and for much of the past 20 years she’s lived with her husband and three kids on what she calls “a 40-acre yard” in Sheridan, surrounded by a colorful menagerie that currently includes chickens, 4-H steers, two 100-pound dogs, a couple of horses and a barn cat. 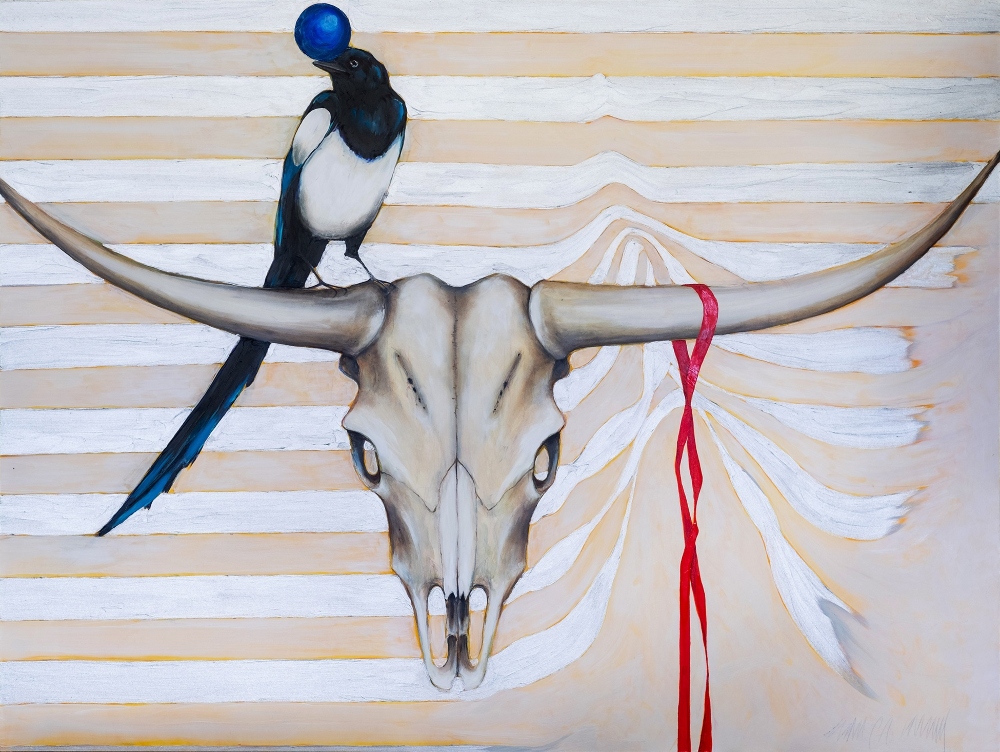 Waddell’s seemingly whimsical paintings of skulls and birds and flowers are layered with profound meaning and metaphor. She weaves humor, irony and wordplay into her canvases. “I like it when elements of nature, like birds, or flowers or grasses, take over human spaces or human objects,” Wad- dell explains. “Instead of us controlling habitat, when animals control our habitat, I think it’s fascinating.”

She’s grateful for the vibrant local art scene. “In Sheridan, we are incredibly fortunate to have very community-minded folks who know the importance of having multi-layers to a healthy community,” Waddell says. “When you have that kind of back- drop it allows for a richer conversation, and that includes artists and art.” Waddell’s artwork is included in the permanent collections of the Yellowstone Art Museum and the Whitney Western Art Museum, at the Buffalo Bill Center of the West. 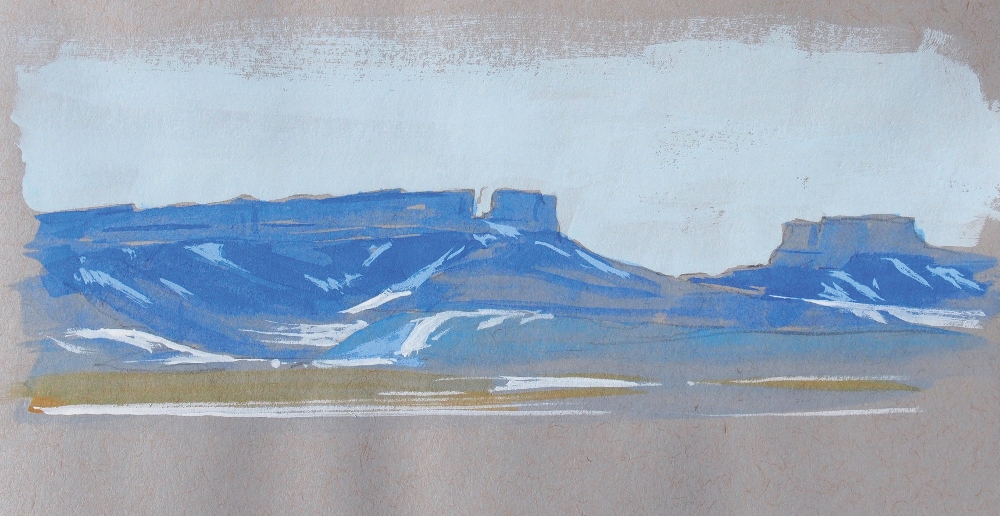 Fresh from the pages of Ostlind’s sketchbook, “One Hundred Miles from Home,” 2020, watercolor/gouache, 3 x 7 inches.

Although he’s traveled around the West as a working cowboy, Joel Ostlind is a true Sheridan local. He recounts, “My maternal grandfather emigrated from Sweden to Sheridan and married the schoolmarm that taught him to speak English.” 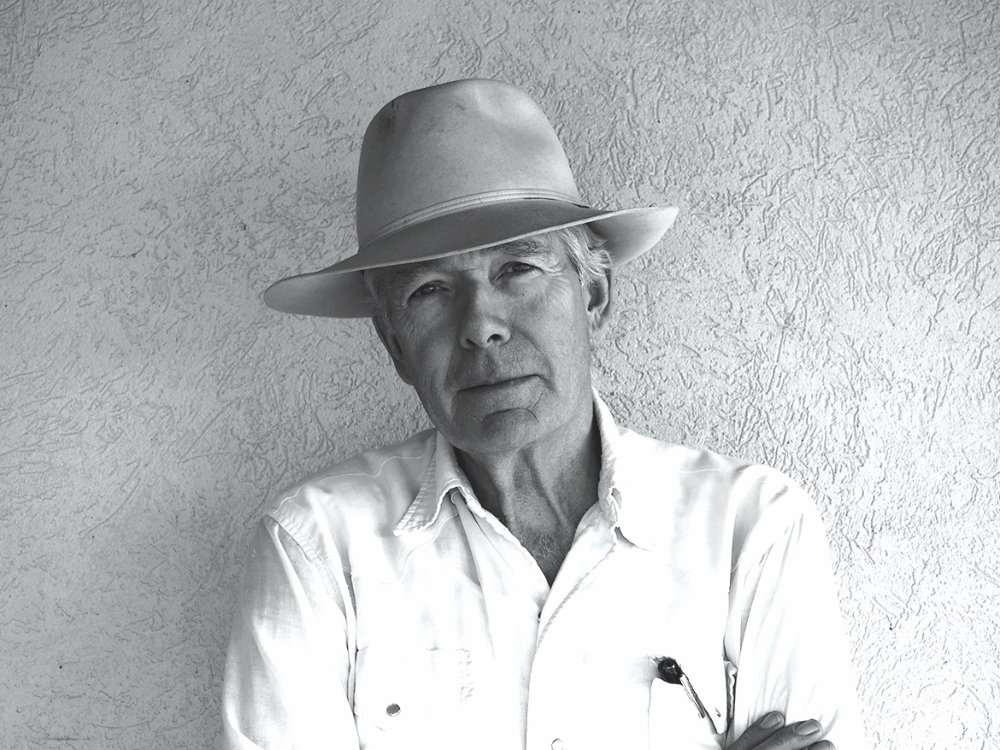 Even during Ostlind’s early ranching years, he loved to draw. “I kind of slipped through the back door to become an artist,” he confesses. “I showed some of my work to the art director and photographer Ernst Haas [who were] working on Marlboro ads at the cow camp we were living at, and they said, ‘go for it,’ and so I did.” Today, the work of this self- taught artist hangs in the collections of the National Museum of Wildlife Art and The Brinton Museum. 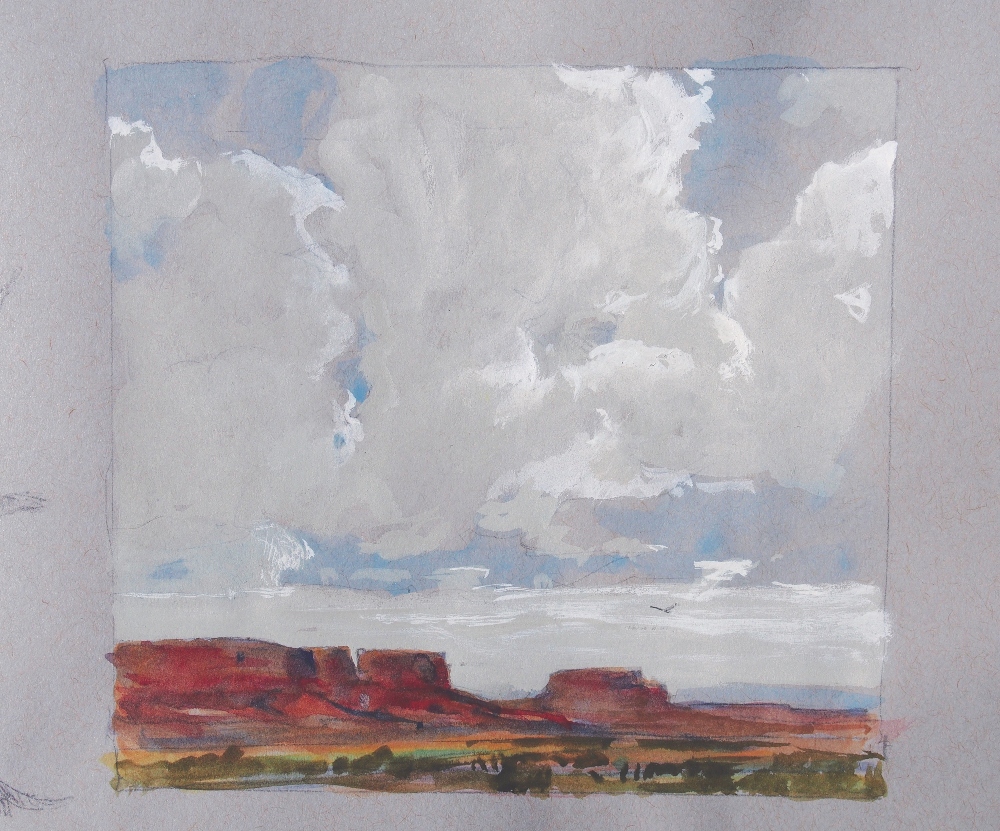 Ostlind’s sensitive observations—of hard-working cowboys, fishing scenes, skiers, livestock and landscapes—are inspired by his daily Wyoming meanderings. “The county goes from grasslands up to 13,000 feet and is good for your eyes,” he says. Ostlind and his wife live in a small cabin outside of Big Horn, and he’s fond of exploring his surroundings armed with a sketchbook, watercolors and gouache paints. 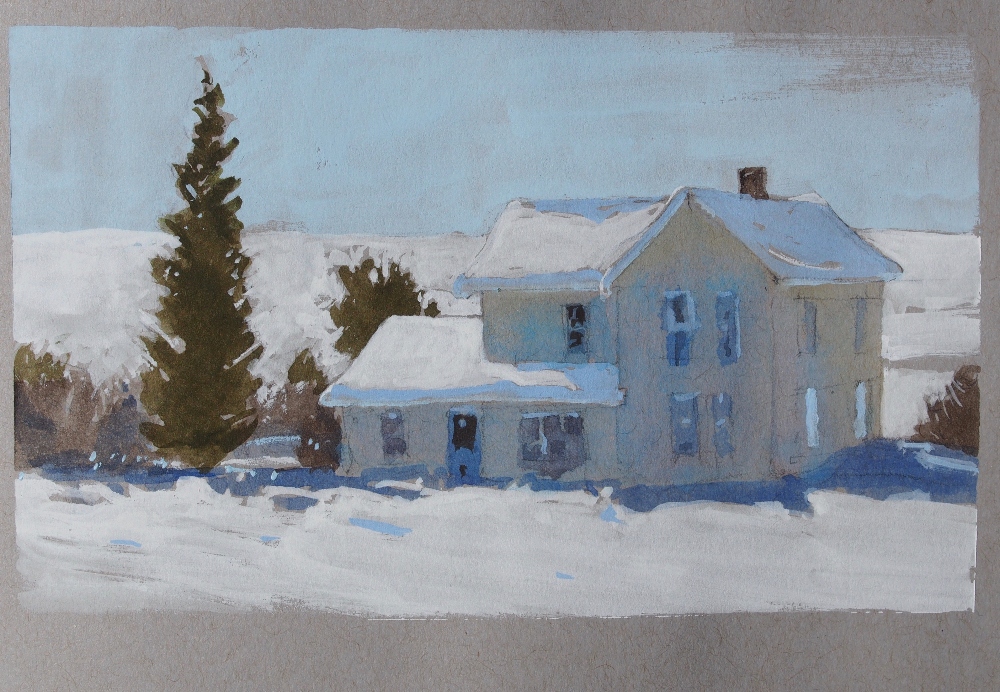 “Artwise, I work best alone, and on outdoor painting trips I usually live out of the back of a pickup, cook on the tailgate, and talk only to the dog or the painting I’m working on at the time,” he explains. Back in the studio, his quick drawings evolve into elegantly nuanced etchings or paintings. “The West is my world,” says Ostlind. “I don’t try to copy it, but try to catch a little of its grandness.” 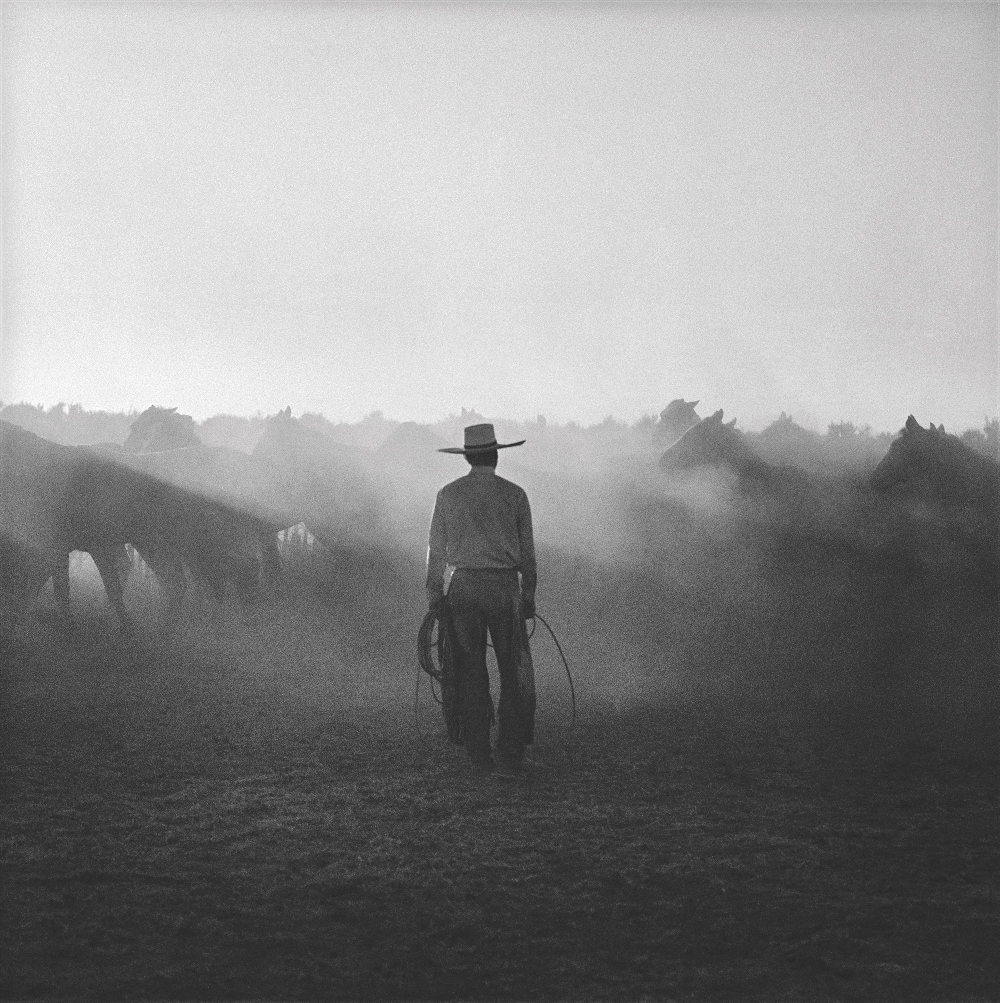 Adam Jahiel is a storyteller with a camera. Early in Jahiel’s career, he had the good fortune to be selected as a photographer on the 1987 French-American Titanic expedition.

Since 1992, Jahiel has made his home in the Sheridan area, where the light, landscape and people inspire his work. “I was a tumbling tumbleweed,” he confesses. “I stopped here and started growing roots that grow deeper every day.” Wide-open spaces and big skies especially resonate with him, fueling his curiosity. “The landscape seems more like a combination of varied landscapes that seem to change every few miles,” Jahiel says. “Each variation offers up its own unique character and story.” 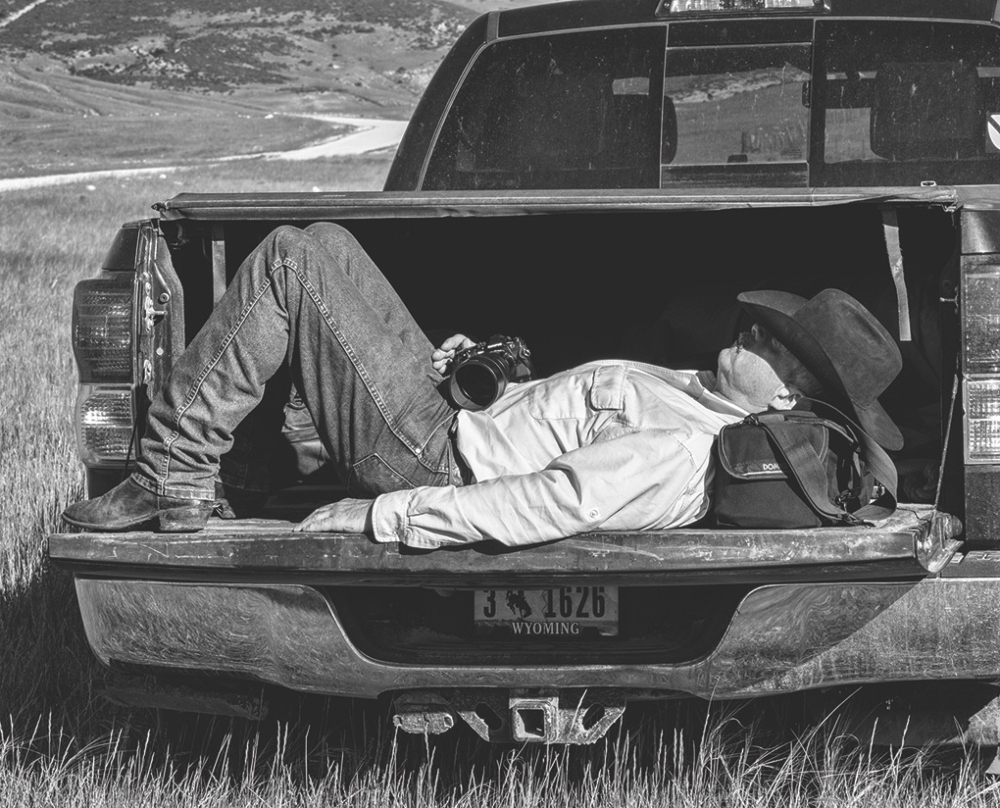 The hard-working artist at rest. Portrait by Rebecca Syler.

His striking black-and-white images capture the dusty drama of ranch life, featuring herds of horses and cowboys. “I’m fascinated by looking at light, form, faces and human behavior,” he says. “If somebody strikes me as being interesting in some way, it is a fun challenge to explore and try and capture their essence.” 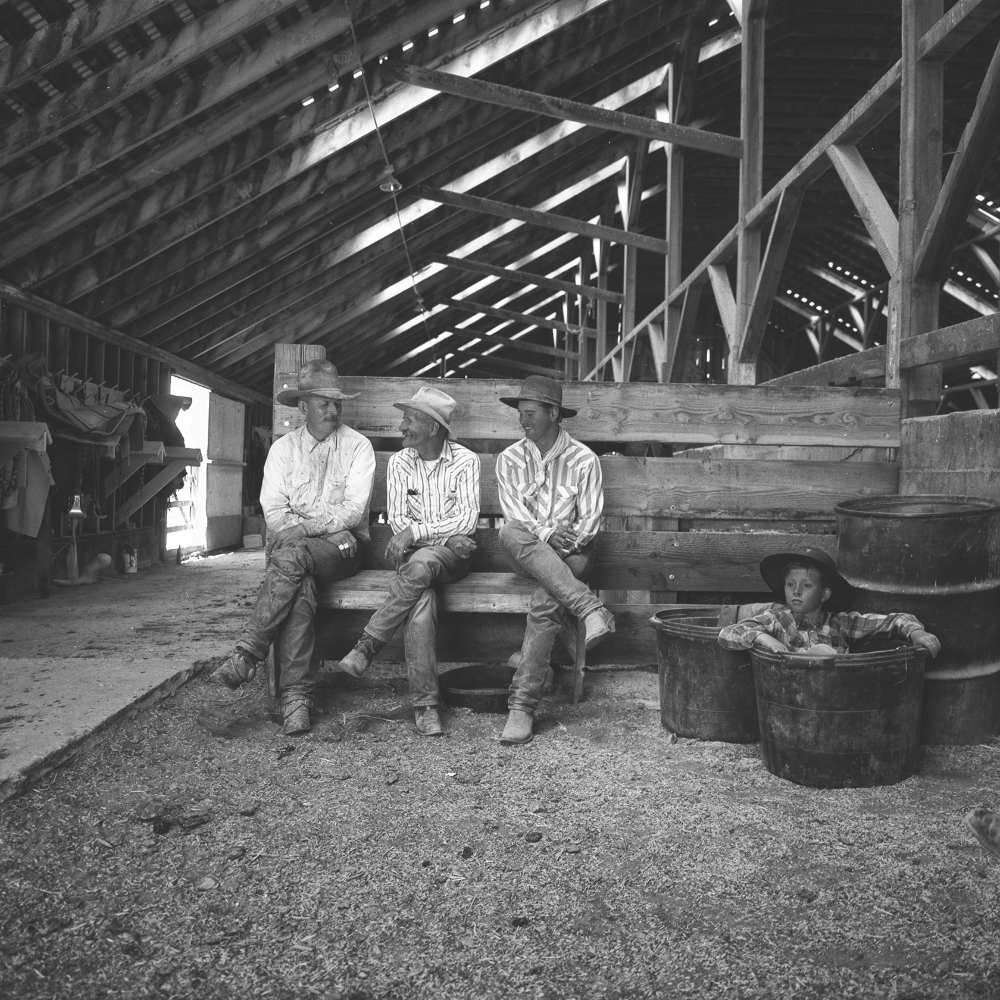 Jahiel’s vision depicts an American West that’s vanishing. “I look for faces and a lifestyle that time has passed by; the last vestiges of a very brief period in history that somehow managed to engrain itself into our culture,” he explains. “Civilization passes through repeatedly, stops for a short time, and then mostly moves on—in between, the land and the people that remain slowly reassert themselves.” 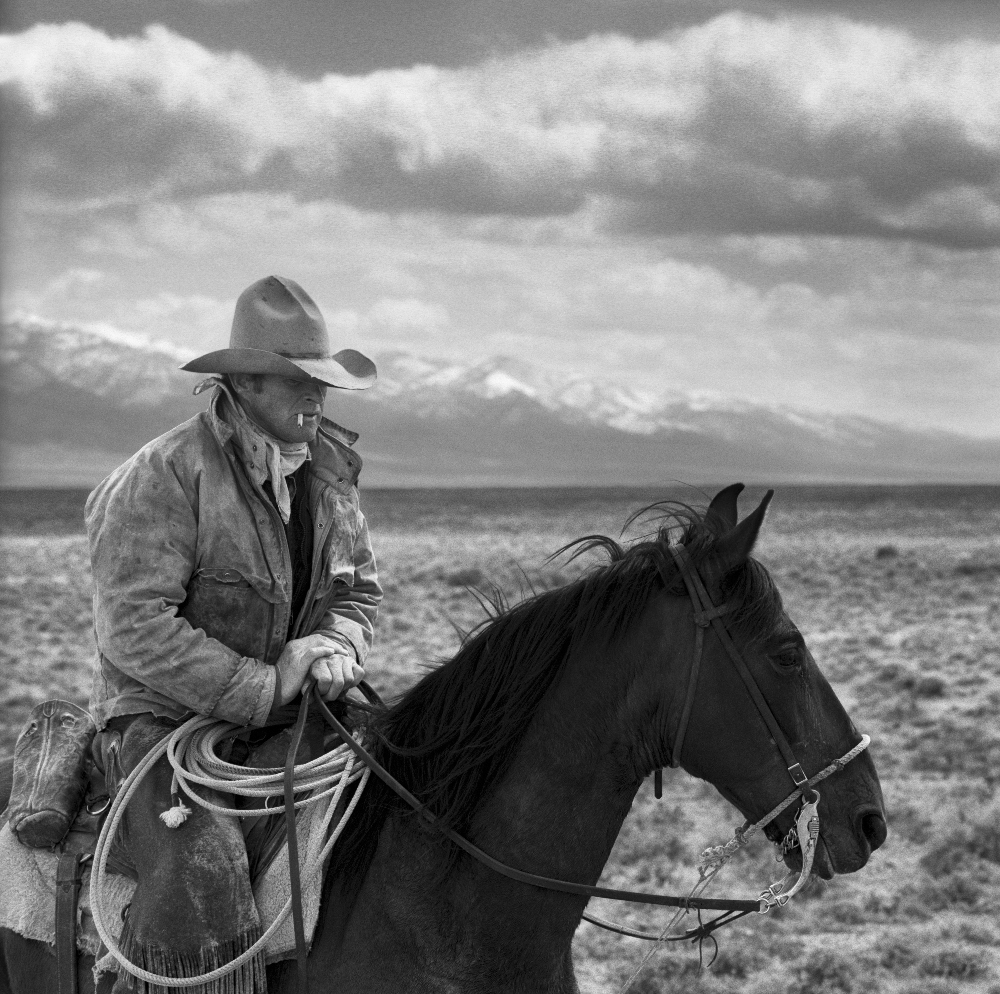 The Amon Carter Museum, Joslyn Art Museum, and Museum of Modern Art are among the many institutions that include Jahiel’s work in their permanent collections, and Jahiel was the first living photographer to have a solo show at the Buffalo Bill Historical Center. 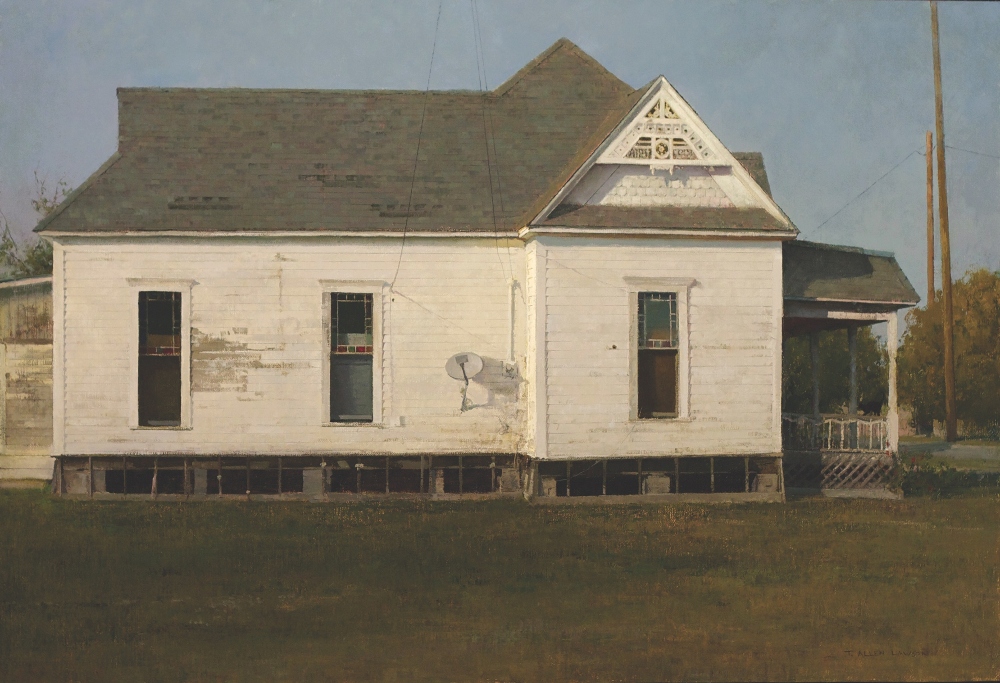 Sheridan native T. Allen Lawson discovered his love of art at a young age. “I had a fabulous junior high art teacher, Nancy Buening, who really lit the fire and opened my eyes to the possibilities of art,” he recalls.

After years of traveling, studying art and painting—living in both Jackson Hole and Maine for extended periods along the way, and gaining recognition for creating the 2008 White House holiday card—Lawson and his wife decided to return to Sheridan. They built a house on some ranch land, and Lawson began working from a studio in a historic 1916 building downtown. 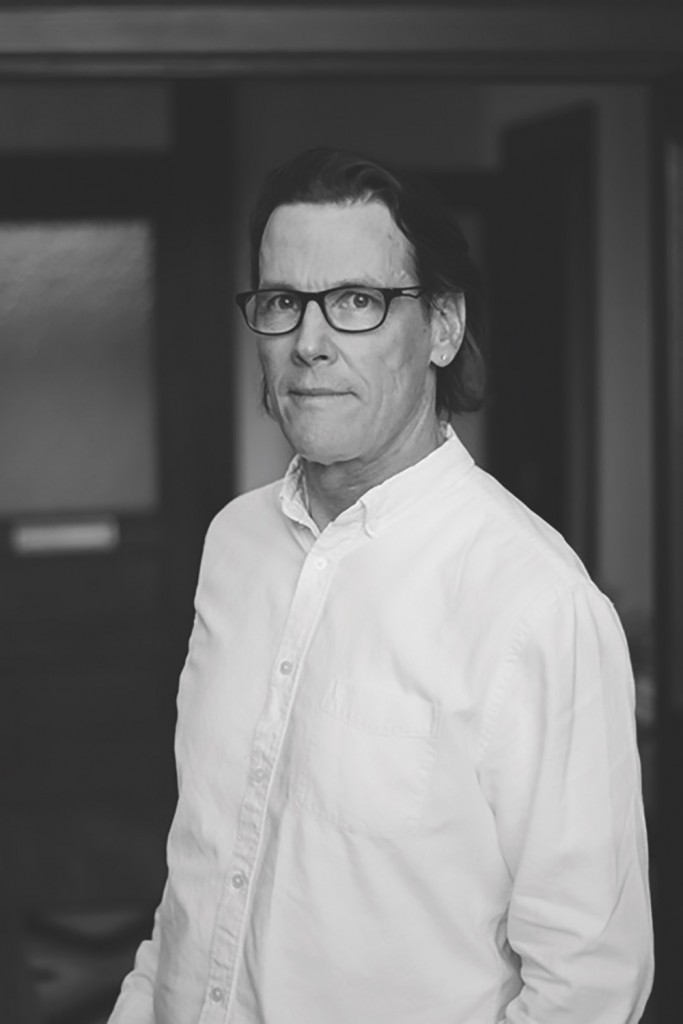 “I truly believe it’s one of the most beautiful and undiscovered places in North America,” he says. “I love the Bighorn Mountains, but I also love east of Sheridan, where you get into that wonderful, subtle, rolling countryside dotted with ranches and small farms.” All of that love shines through Lawson’s images of barns, fence lines, cattle and lonesome roads with a hushed radiance. 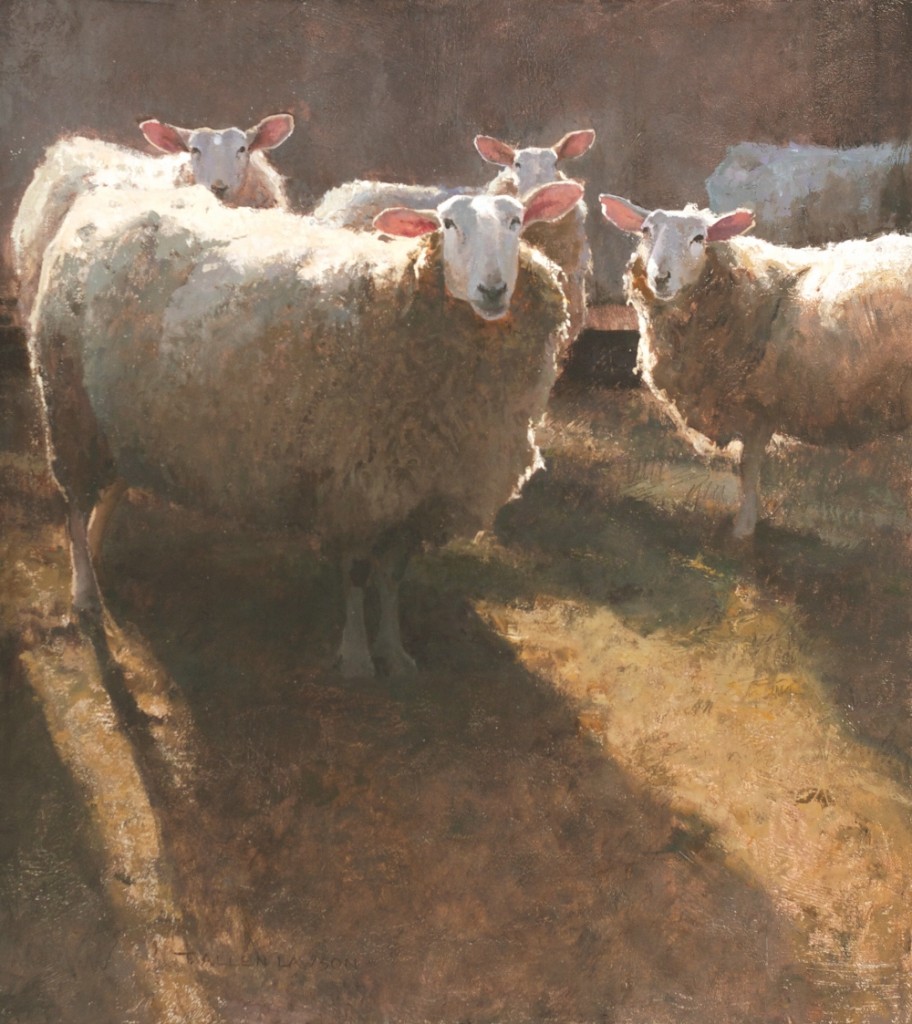 “I never know when something’s going to inspire me or catch me,” he says. “A lot of times it’s something I’ve seen dozens or hundreds of times—a building on the ranch, or a simple irrigation ditch—and then one morning the light just happens to catch it right, or my mindset is open, and it hits you: ‘Oh wow, look at that.’”

In the studio, Lawson borrows, chooses and manipulates elements of the landscape until he’s satisfied. “I’m trying to paint the feeling of a location,” he says. “It’s never just a mere rendering of what you see.” 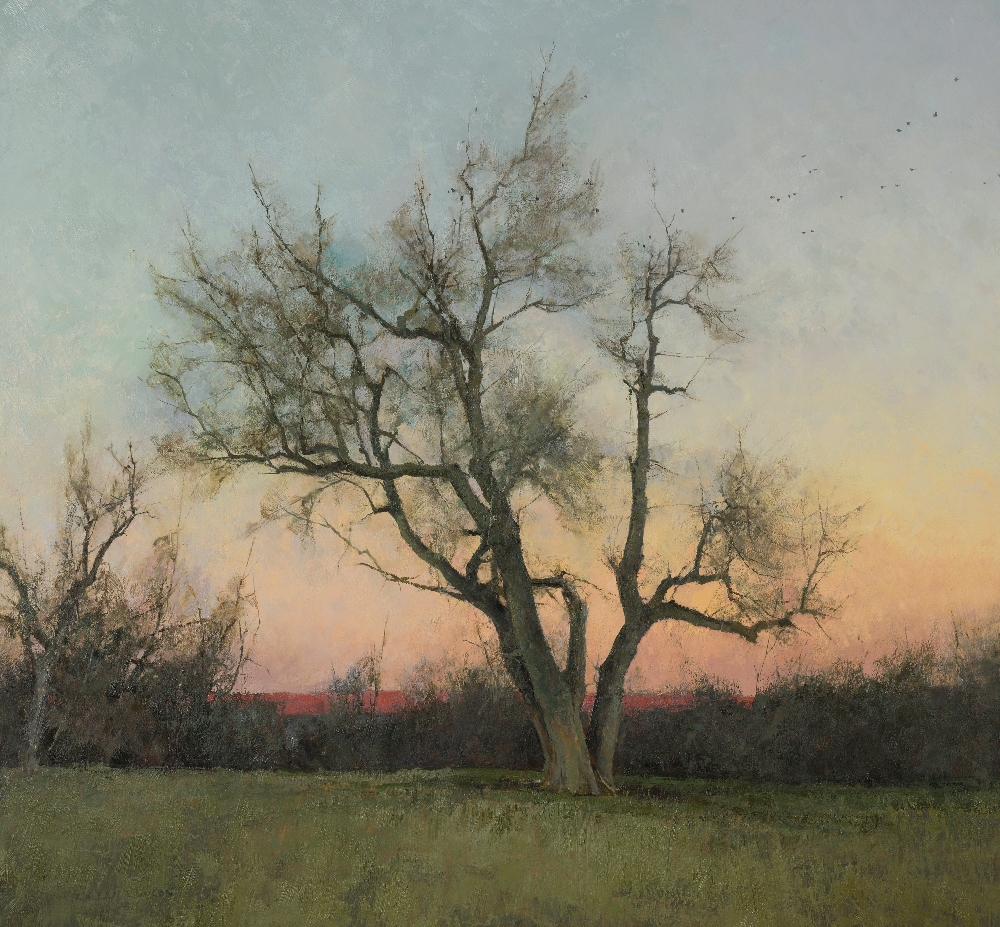 Lawson’s numerous honors include the Donald Teague Memorial Award at the National Cowboy & Western Heritage Museum’s 2019 Prix de West and the 2019 Spirit of the Buffalo Bill Art Show & Sale Award. His work is in the Denver Art Museum, the Smithsonian Institution, and many other prominent collections.