With its mesmerizing flames and welcoming warmth, a fireplace is often the focal point of a room in a mountain home. Just as rooms need occasional decor updates to stay current, so do fireplaces.

A fireplace facelift can be as simple as applying paint or replacing the accessories on the mantel to reflect a shift in seasons, or as dramatic as changing both the style of the fireplace and the way it functions.

Carol Moore Mink, ASID, recently worked on the remodel of a Beaver Creek townhome that called for removing a 6-inch river-rock veneer fireplace and updating it with vein-cut travertine marble. “The marble was cut parallel to the grain like wood planking. It looks spectacular,” says the designer, who is based in Edwards, Colorado.

What she aimed for with the townhome, and what she recommends homeowners do, is keep the look consistent. “Come up with a general theme and stick with it,” she suggests. In the case of the townhome, the residents also redid the kitchen and bathroom. All the spaces ended up being clean-lined and architecturally simple, she says. 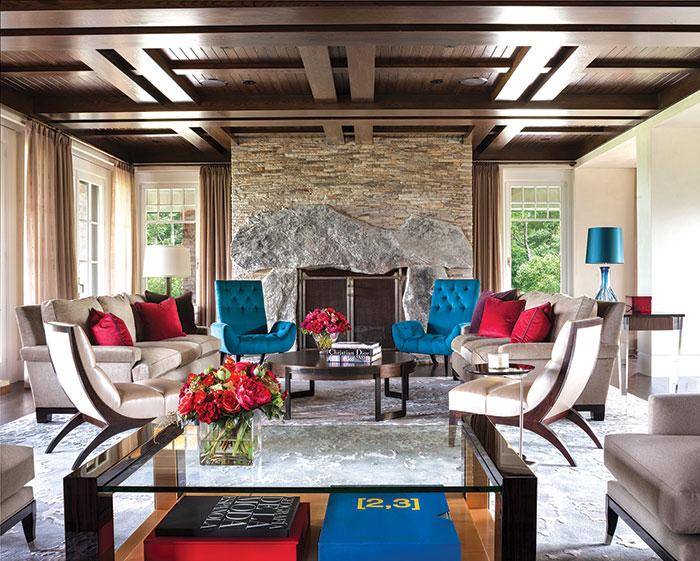 With its dramatic use of granite, the wood-burning fireplace in this home by architect Don Aitken of Shope Reno Wharton in Norwalk, Connecticut, is a gathering point. Interior designer Carol Moore Mink included ample seating in the room as the homeowners enjoy entertaining. On the adjacent porch, the family has a second outdoor fireplace that shares a chimney with this one.

The popularity of midcentury design is fueling an interest in linear fireplaces, which feature a narrow horizontal ribbon of flame, often on a bed of stones or glass rocks.

The linear fireplace design is appealing for its practicality and heat output as well as for its sleek lines, says Mike Powell, director of marketing at Miles Industries, which makes Valor-branded gas fireplaces in North Vancouver, B.C. Valor last year introduced a linear fireplace with hidden duct work so that the heat that builds up inside the firebox can be transferred via vents and into the upper part of a room or to adjoining rooms.

“Architects like it because it gives them a greater choice of the materials they can use around the fireplace,” he explains. “You can also put a TV or artwork above the fireplace without fear of damaging it from the heat.” 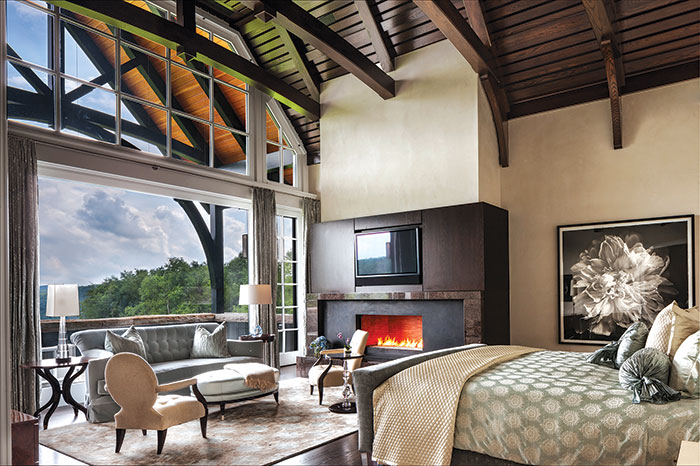 Equal parts heat source and ambience, the fireplace is a focal point of a master bedroom in a residence designed by Carol Moore Mink.

Making a major change to a fireplace is an investment that will pay off in the owner’s enjoyment of the space, according to Eric Walden, owner of Distinctive Mantels, in Denver. “What you are doing is going to create a lot of value, both in how it looks and how the house feels.”

Walden doesn’t deny that fireplaces warm a room, but he finds that homeowners are prioritizing their aesthetic value. “Heating systems today are so efficient and homes are so well built that you don’t need a fireplace for heat as you once did,” Walden explains. “People are looking for ambience.” 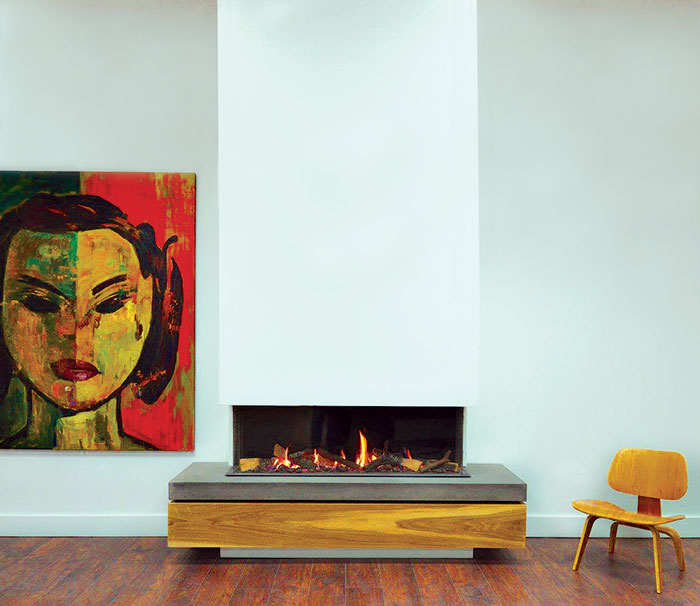 The linear and modern Trisore fireplace from Element 4 and Distinctive Mantels is a three-sided or “bay” style. The gas fireplace has an extra wide opening and the firebox can be outfitted with a log set, fire glass, white marble pebbles or gray stones.

WHAT YOU NEED TO KNOW: FIREPLACE UPGRADES

Thinking about giving your fireplace a makeover? There are a number of things to consider according to fireplace experts Larry Grogan, executive director of the Rocky Mountain Hearth Patio & Barbecue Association; Mike Powell, marketing director at Miles Industries, makers of Valor Fireplaces; and Eric Walden, owner of Distinctive Mantels.

Start with the basics  Local rules and regulations factor into what kind of fireplace you can install or replace. In many areas, due to air quality concerns, new wood-burning fireplaces are forbidden. With older homes, one of the key considerations in getting a new gas fireplace is whether your house can accommodate the amount of additional BTUs needed to run the unit and other gas appliances in the home.

Gas up New gas fireplaces and inserts are energy-efficient, providing steady, even heat that you can control with a thermostat or remote. They can be directly vented to the outside of the home rather than requiring a chimney. “If you have a wood-burning fireplace, the heat from the room gets sucked up the chimney and is gone,” Powell says. A gas insert is designed to bring in outside air, heat it and disperse it as radiant heat via the glass-fronted fireplace.