Up on the Roofscape

A hundred and thirty years ago, as pioneers spread across the northern Great Plains and into the Rockies, those who settled on treeless land had few options for building homes to shelter them from harsh winters and summer heat. But one material existed in abundance: sod.

With tightly knit root systems as deep as 8 feet, America’s native amber waves of grain could be easily cut with basic farm tools, then formed into sturdy blocks used to build rudimentary walls that provided superb insulation. These sod houses were then topped with grasses that swayed in the wind. Affectionately called “soddies,” the dwellings soon gave way to more permanent residences evoking the styles of settlers’ homelands. But they were fondly remembered for the cozy, if often grimy and damp, comfort they provided, and sod has endured as a practical roofing material for some log cabins. 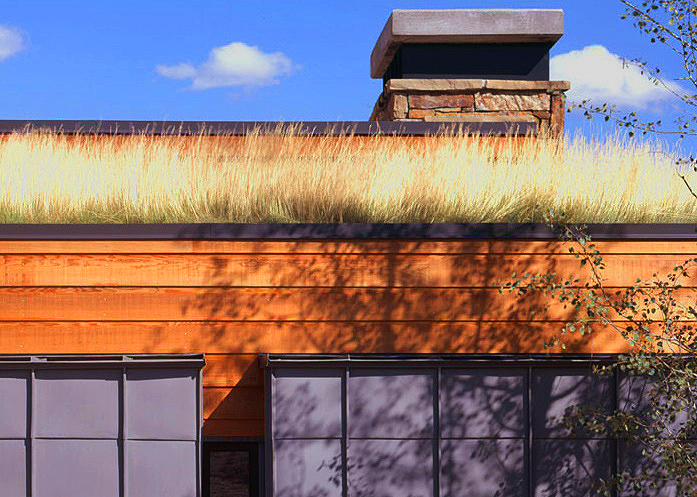 Beginning in the 1970s, sod roofs enjoyed a comeback as part of a larger eco-conscious architectural movement spurred partly by the fuel crisis of 1973-1974 and partly by the growth of environmentalism. That revival led Tom Ward and Mitch Blake, both sons of the Rocky Mountain West, to begin exploring innovative ways to employ sod roofs when they formed Ward + Blake Architects in Jackson Hole in 1996.

“Our desire,” explains Ward, “was to use sod roofs as a historic prototype that anchors architecture visually to its site and surroundings.”

Adds Blake, “Advances in technology enabled us to make sod roofs happen in a smart way that eliminated the problems those early soddies had.” The result: beautiful, natural roofscapes that are moisture-proof, reduce water runoff, provide some energy benefits during summer months (see sidebar, opposite), and sometimes even provide rooftop outdoor living areas.

“After the wet spring we’ve had this year,” says Ward, “you wouldn’t believe the lush, ripe-looking, knee-high grasses on some of the roofs we’ve planted. In the fall, they’ll go golden. These roofs add a dynamic component to the structure that changes with the seasons.” 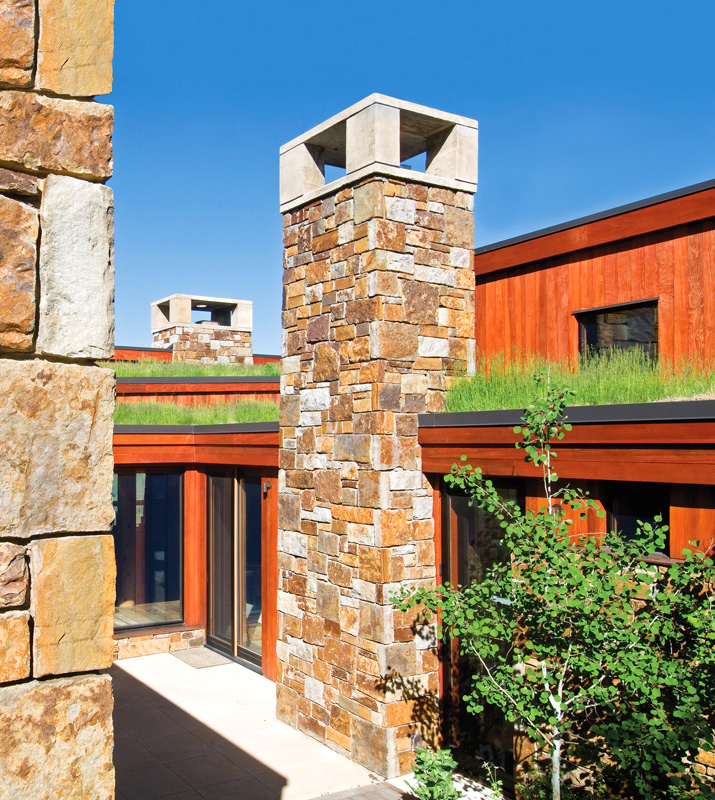 Contrary to popular belief, modern sod roofs don’t contribute much to HOME INSULATION. While they offer some thermal mass properties, those designed by Ward + Blake are just 8 to 12 inches thick and employ a blend of soil and perlite beads that’s 30 percent lighter than ordinary soil, so they don’t have significant thermal mass. They also must be isolated from home heating systems, which could kill off grasses during winter. During summer, the extra vegetation does reduce the overall ambient
temperature surrounding the structure.

For a leak-free sod roof, CAREFUL INSTALLATION is essential. Before the sod is added, a waterproof membrane is laid down. Most problems result from improper care in that process, such as micro-punctures from nails, tools or boots.

Planted with native grasses, sod roofs are LOW MAINTENANCE, requiring just “an annual weed-whacking in the fall,” says Ward. For more color, they can be sown annually with native wildflowers. But, left to its own devices, the roof will revert to native grass.

Depending on the environment and plants used, sod roofs may require some IRRIGATION, especially in climates where perennial plants would need a little water to help them get going come spring. Drip-irrigation systems work just fine. And, clog-free drains built into the roof can direct irrigation and rainwater from the roof to landscaping surrounding the house.

This article appears in the August 2011 issue of Mountain Living.
Categories: Contemporary Homes