This Food Scientist’s Kitchen Is Equal Parts Brains and Beauty

Instead of devoting more square footage to his favorite room in the house, this homeowner prioritized economy of movement—and style, to boot.

When you enter the front door of an elegant mountain home, you usually don’t expect to see a floor-to-ceiling combination gas/wood-fired pizza oven or a 60-inch Blue Star Dual Fuel range with a French top. But that’s exactly the kitchen you’ll find in this mountain abode—whose homeowner is a both a physician and a food scientist. 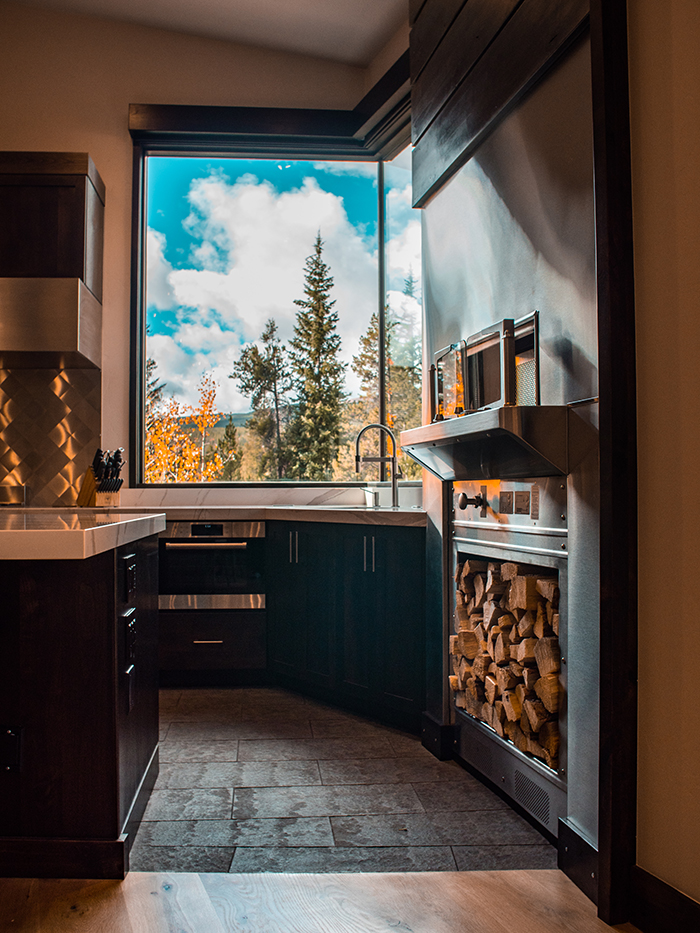 The kitchen-design process for this custom home began before the architectural plans were complete, as the design team wanted to ensure there were no barriers to function—ventilation, economy of space, placement of windows, etc. —while also “disguising” a professionally equipped kitchen within an upscale residential setting.

For this homeowner, being in the kitchen is a joy, and from the start of the project it was clear that the kitchen was the most important feature of the home. But instead of allocating more space to the kitchen, the homeowner pushed for a relatively small percentage of the overall square footage to be dedicated to the kitchen proper. This decision was deliberate, as he wanted the space to function like a commercial kitchen, with economy of movement between the important elements. The design was rooted in the selection of commercial grade appliances from Wolf, Sub Zero, and Blue Star that, while important to the homeowner, could threaten to dominate the space due to sheer size. In response, the design team took particular care in balancing the appliances’ visual weight with elegant, furniture-built custom cabinetry and an abundance of natural light. 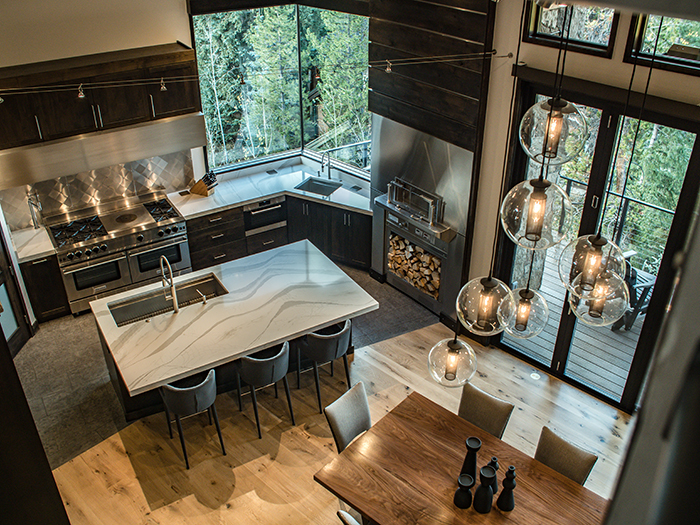 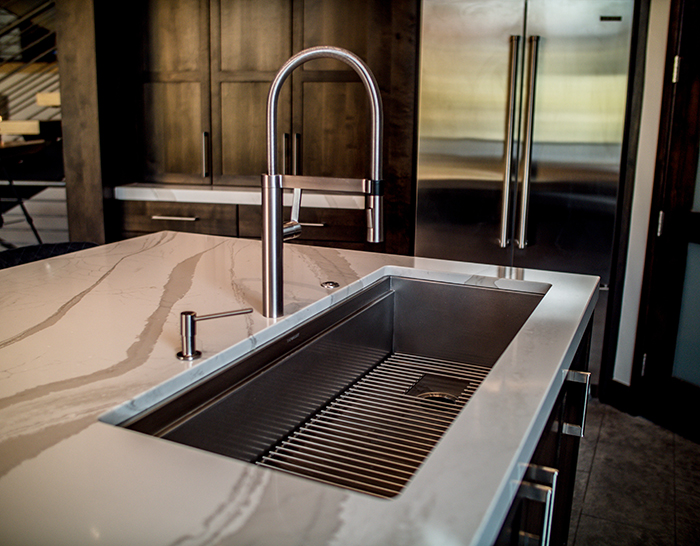 The result was a space that functions like an open kitchen in a fine restaurant, equal parts brains and beauty. The single-level island does double duty, both as a work surface (thanks to the nonporous and nonabsorbent Cambria surface for safe food prep) and as inviting theatre seating for fortunate dinner guests. The design team understood that witnessing the magic of the meal being prepared is part of the experience, and the homeowner worked closely with the team with regard to appliance placement and flow of movement in the space. 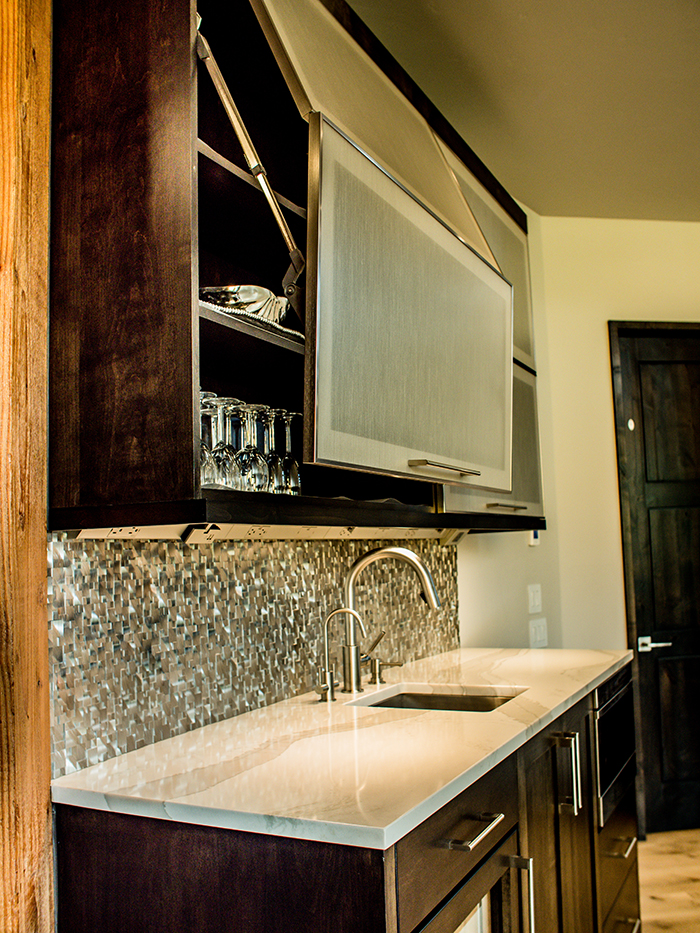 In order to completely integrate the working kitchen space with the living area, the design team placed a wet bar at the opposite end of the space. Echoing the warmth of the dark custom cabinetry, the neutral palette and the highest quality of materials, the wet bar allows for a social center that refers to the kitchen while being part of the living area. Frosted glass, stay-lift doors from Element Designs soften the visual weight of the bar that is home to a microwave, under-counter beverage center, and plentiful storage. 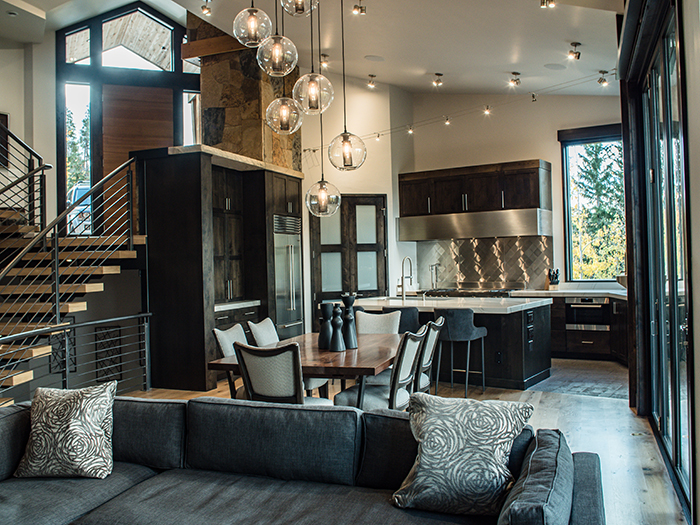 Finally, a strategic combination of lighting (recessed, decorative, and natural) creates a seamless transition from high-functioning workspace to a generous and welcoming area for relaxation. Watching the homeowner host a meal while moving seamlessly about the kitchen, it would appear this design is just what the doctor ordered.

Lauren Ruehring is owner and principal of Kitchenscapes, a premiere kitchen and bath custom cabinetry design firm based in Breckenridge, Colorado. View their profile or contact Lauren at 970-453-7107.