This Colorado Remodel Is All About Art

A 1970s home is transformed into a personal art gallery—including its beautifully framed mountain views.

When these homeowners bought a mountainside 1978 home in the foothills west of Golden, Colorado, what they really were purchasing was the view. With 180-degree vantage points of Mt. Evans, as well as the rolling valley that leads down to Denver beyond, the site was exactly what these retirees from Michigan had dreamed of. But the outdated residence needed some serious renovations to make it their own.

“We wanted a modern house with a sense of spaciousness,” says the homeowner. “A place we could use for art display—and in a sense the surroundings are art, too.”

The original 4,000-square-foot home was remodeled to feel continuous with its 3,000-square-foot addition. The result is a mountain modern retreat with bright and airy interiors that complement the owners’ art and the site’s breathtaking views. Take a tour below. 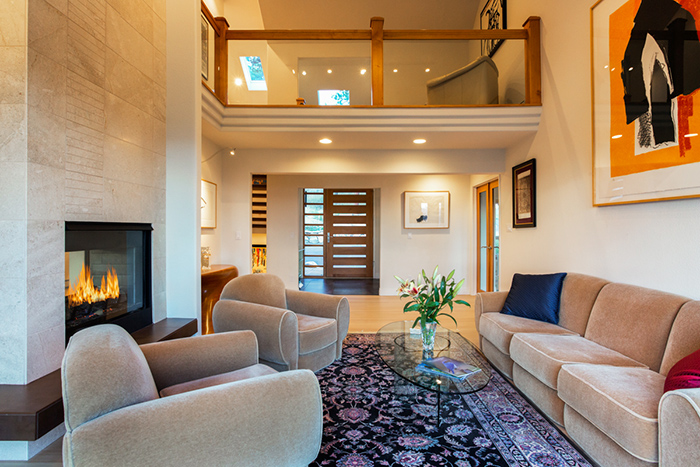 The custom-made, four-foot-wide front door sets the stage for modern design upon entry, as well as an inviting sitting area with a contemporary, two-sided fireplace. “Black Cathedral” by abstract expressionist Robert Motherwell hangs above the sofa. 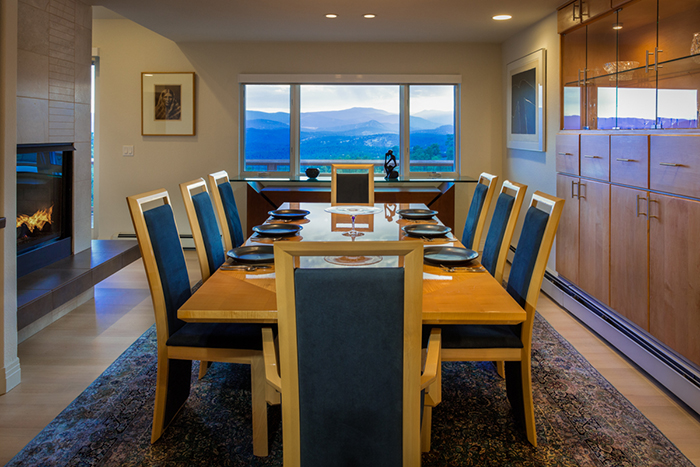 On the other side of the fireplace sits the dining room, which drinks in gorgeous views of Mt. Evans beyond. 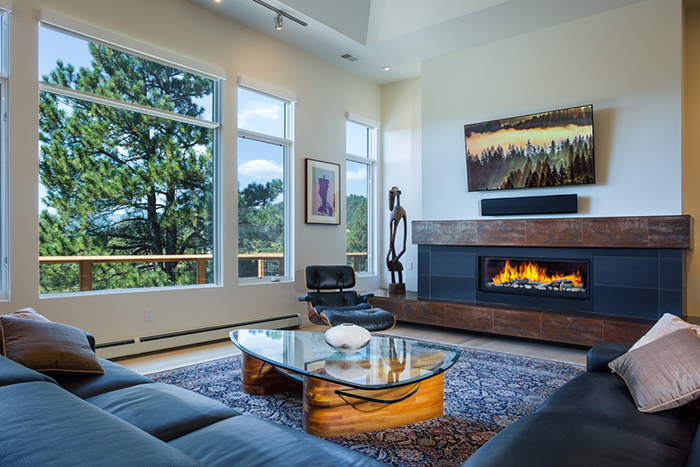 A sleek fireplace anchors the family room, while large windows invite the outdoors in. Many pieces featured in the home, such as the coffee table pictured above, were commissioned by the homeowners from artisans at the Ann Arbor Art Fair. “From the size of the walls and the orientation of the windows to the height of the ceiling,” says the homeowner, “everything was designed to create enough visual space so that both the interior and exterior art are in harmony.” 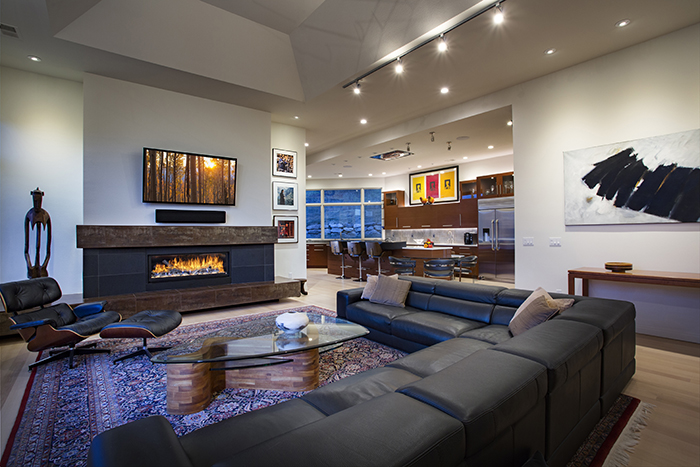 The family room seamlessly transitions to the kitchen, and along the hall hangs a black and white Nurcan Giz painting, which the couple acquired while in Paris. The triptych above the kitchen cabinets was created by the homeowners’ granddaughter. 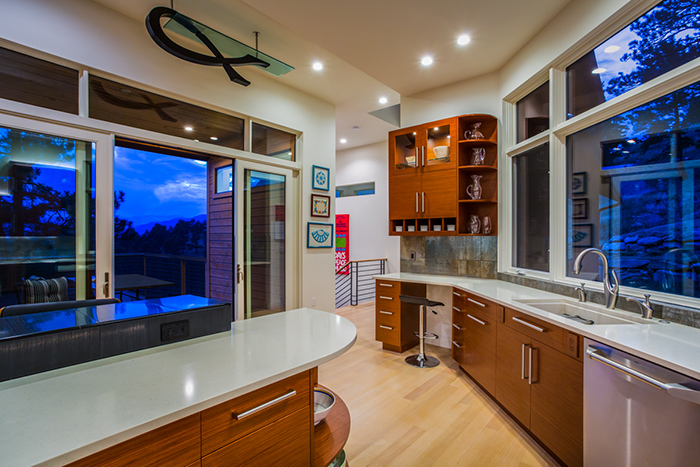 This kitchen truly serves as the hub of the home—and it was designed for spending quality time with friends and family. Not only is there ample space for cooking with their children and grandchildren, but the couple also enjoys three different views from their culinary space: up the hill toward the Ponderosa Pine forest, where they often see elk and other wildlife up close; the glorious Mt. Evans in the distance; and the rolling foothills. 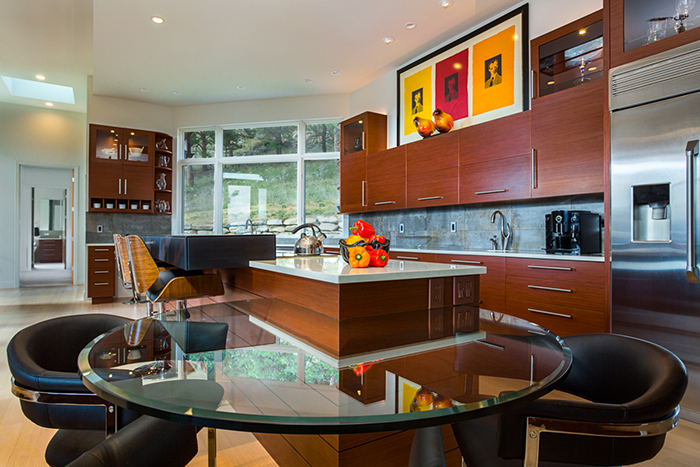 A kitchen island, bar, and extendable glass table create a cozy spot for dining and enjoying company. “We tend to eat there rather the dining room,” says the homeowner. “It’s such an intimate space.” A porcelain tile backsplash echoes a texture found frequently in the home’s flooring and fireplaces. 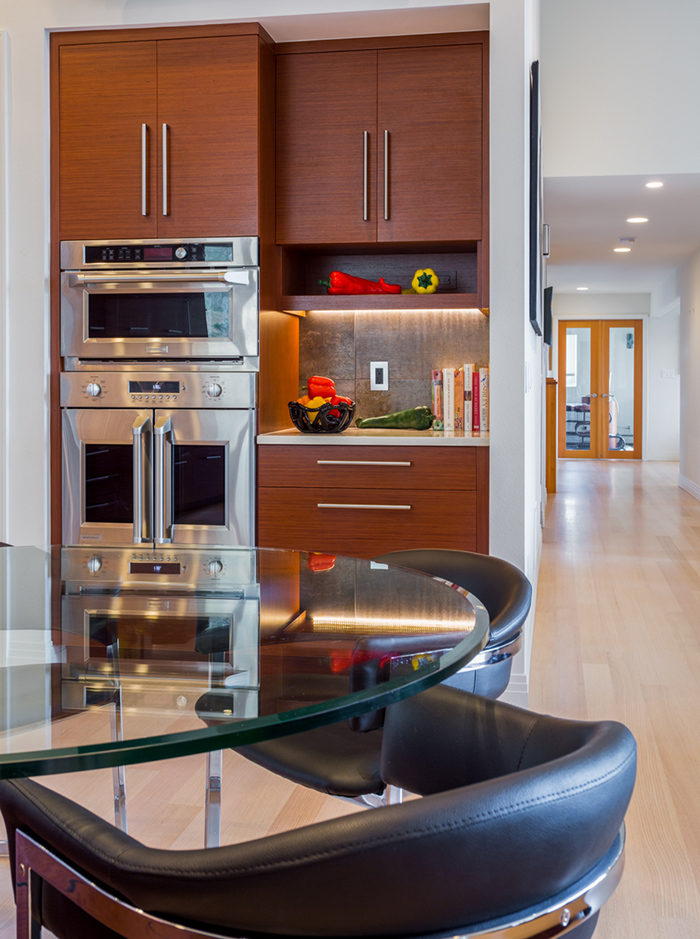 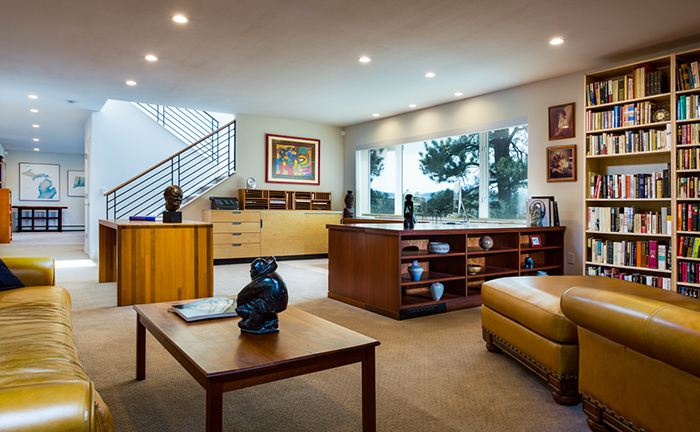 This lofty library acts the homeowner’s office—adorned with sculpture, pottery, and other artwork—as well as an homage to his personal motto: “You are what you read.” U-shaped bookcase walls wrap around one end of the space. 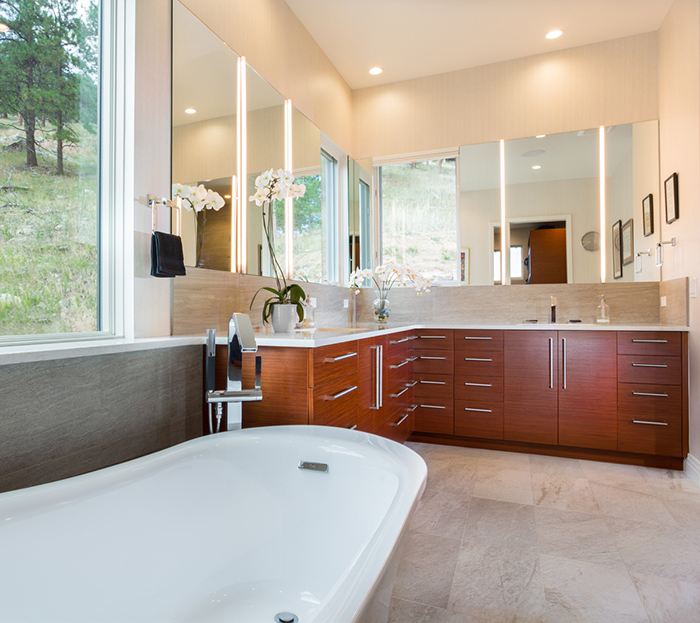 “At the end of the day, I couldn’t imagine a house that better reflects who we are,” says the homeowner. “This home is all about light, space, and a setting for art—inside and out.”

Karen Keating is a principal at TKP Architects, an award-winning architecture firm based in Golden, Colorado. View TKP's profile or contact TKP Architects at 303.278.8840.