These half baths are something to see

It’s typically the smallest decorating project in a home, but it makes an outsized statement. The powder room is a space that homeowners can infuse with color and texture as well as
unusual or dramatic materials to impress guests and add an element of the unexpected.

Why do designers and homeowners tend to go wild on this room? “It’s such a small space, you can use relatively expensive or outlandish materials because you don’t need as much of them,” says Larry Sykes of Arch11. In addition, there are fewer design constraints. You don’t have to tie all the elements together as you do when designing a full bathroom with a tub and shower as well as the countertops and toilet, says McKenzie Dickson of Denton House Design Studio.

“It’s also a space that everybody sees,” says interior designer Abby Hetherington, “so you want to do something that’s a little different and has an element of surprise when your company goes in there.” Here are four powder rooms at mountain retreats that run the gamut of styles. 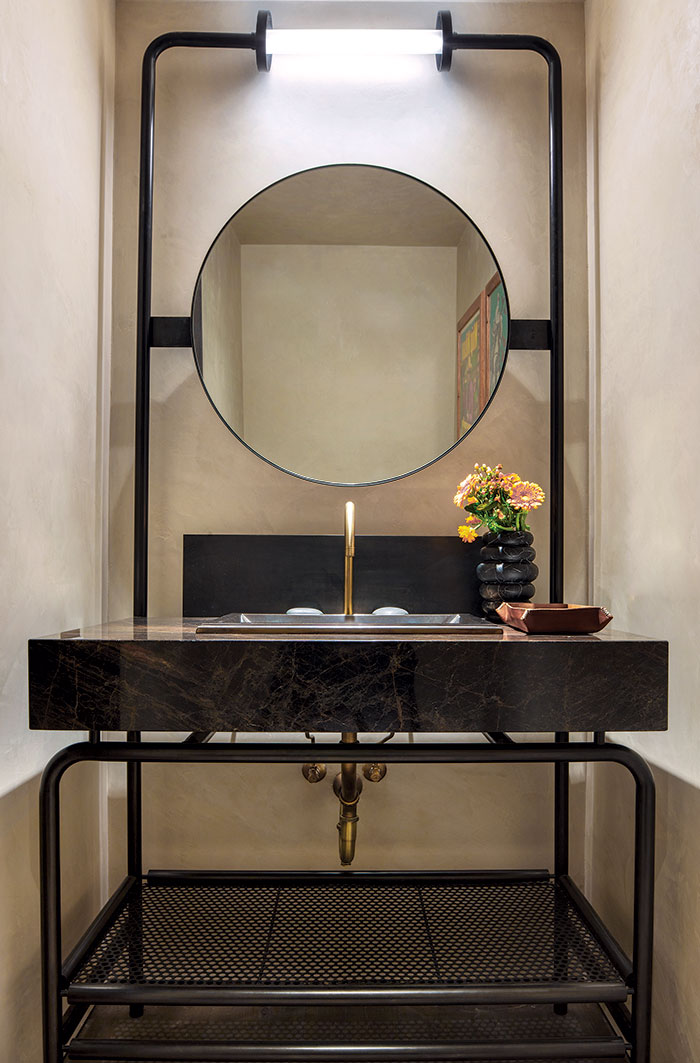 For a powder room adjacent to the bar and theater room in a Montana resort home, interior designer Abby Hetherington collaborated with the homeowner, architect and builder to forgo the classic vanity sink, mirror and light routine and create a one-piece unit. The resulting metal structure has a round mirror that swivels, an integrated lighting system and bronze sink. The unit suits the residence’s modern transitional décor and eclectic mix of elements. The industrial feel of the metal design and the mesh shelf below is warmed by the stone countertop, the designer says. “There’s a glam element, but it is organic.”
Designer: Abby Hetherington | Bozeman, MT
Architect: Miller Roodell Architects | Bozeman, MT 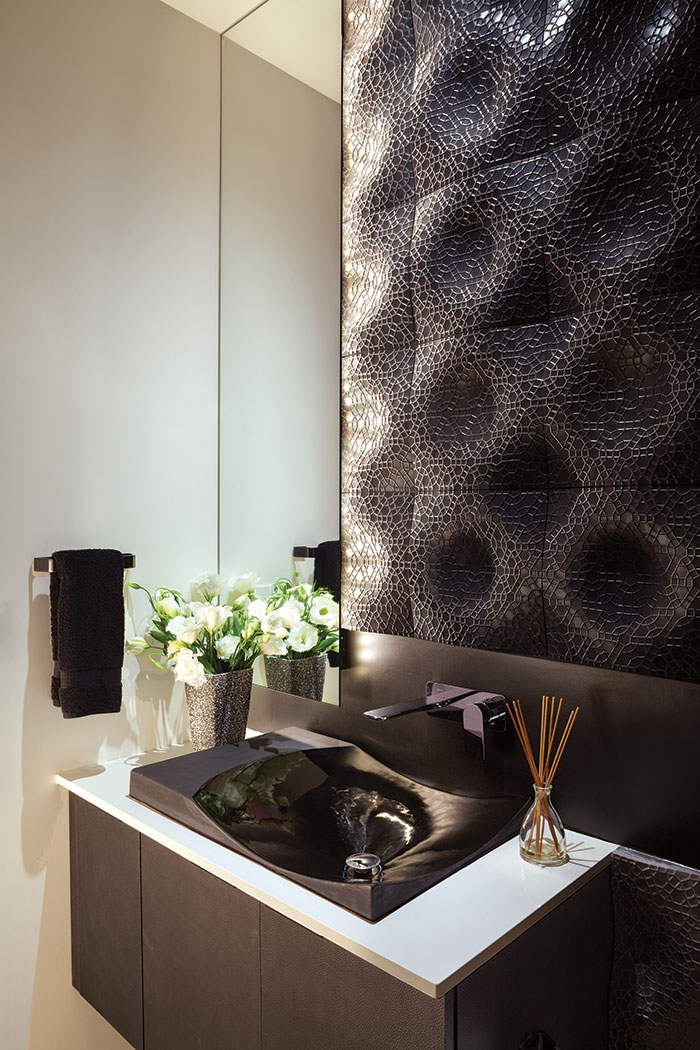 A mirror is one of the must-have items in a powder room, along with a sink and toilet. So putting just a slice of the reflective surface off-center from the sink and faucet is a twist. That is precisely what Tim Lowell and Cindi Roberts had in mind for the half-bath in their Larkspur, Colorado, home. They wanted the focus to stay on the sculptural black concrete tile from the Kaza Collection by Walker Zanger. The tile covers the wall, floor to ceiling, split by a Caesarstone counter accented with a sculptural cast-iron Toto Waza sink and Graff Sento faucet.
Architect & Project Manager: E.J. Meade and Larry Sykes, Arch11 |  Denver, CO 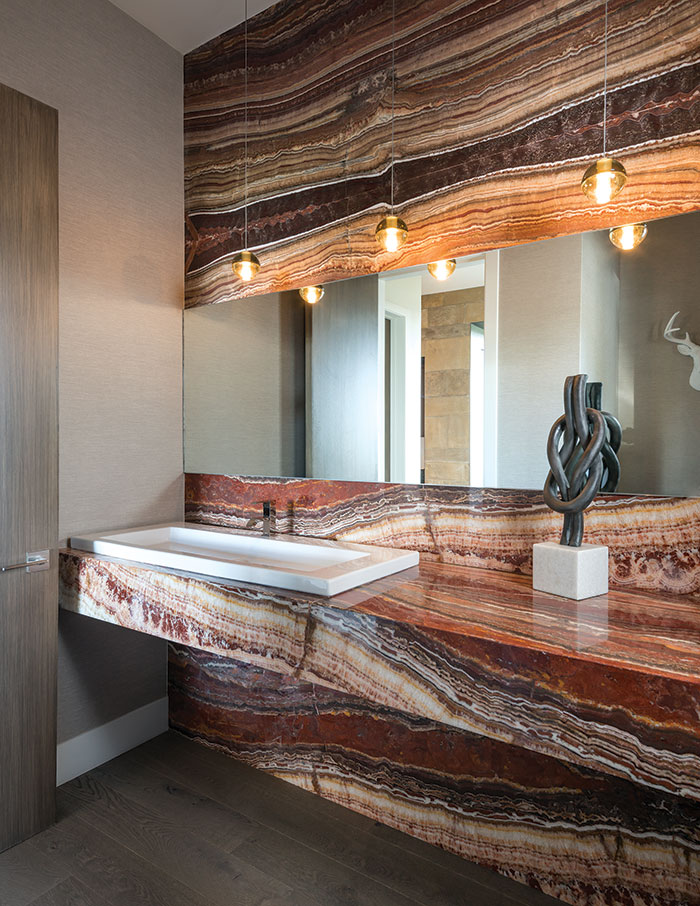 A homeowner who likes to entertain decided that nothing but drama would do as he contemplated the design for the bathroom guests would visit in his Yellowstone Club retreat in Big Sky, Montana. The powder room features a wall of Fantastico onyx above and below a horizontal mirror. The stone is repeated on the countertop, which has a Duravit sink and Graff faucet. Simple smoke-glass pendants from Bocci illuminate the space. “The owner likes to take people there last when he gives them a tour,” the designer says. “It surprises because it doesn’t look like anything else in the house.”
Designer: McKenzie Dickson, Denton House Design Studio | Salt Lake City, UT
Architect: Reid Smith Architects | Bozeman, MT 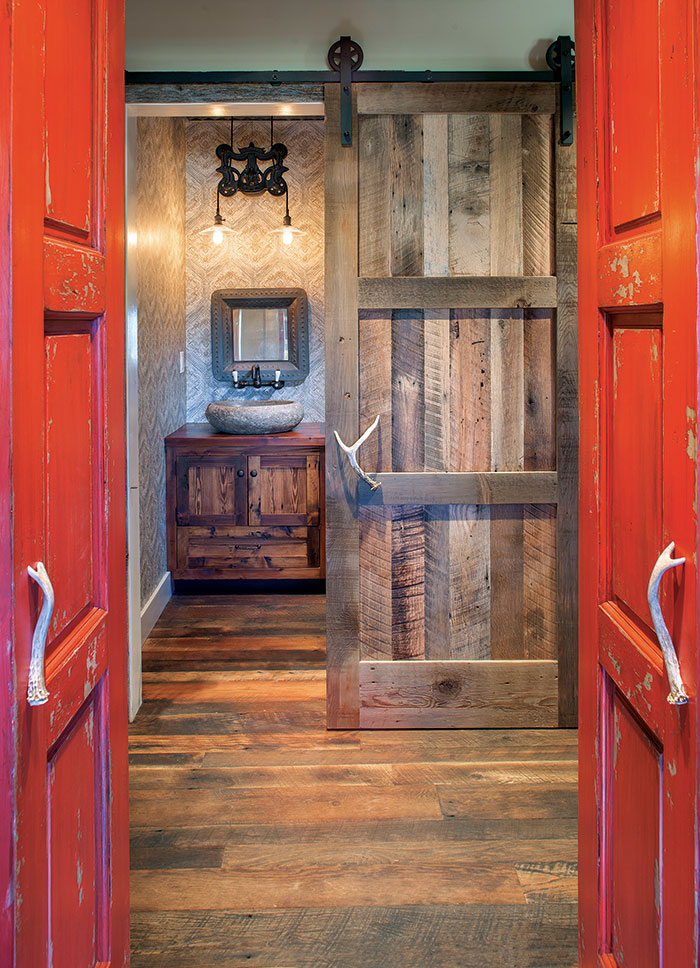 Preserving their home’s roots while making it comfortable and livable was the goal Holly and Chuck Schiavo had for their Crested Butte cabin, which was built in the 1940s. The powder room has a barn door closure that is as space-saving as it is decorative, and is detailed—along with other doors in the residence—with shed antlers for pulls. Those antlers were courtesy of builder Scott Hargrove, whose company also constructed the cabinetry base for the room’s vanity. A Restoration Hardware light fixture and metal-framed mirror from Studio West Interiors underscore the home’s rustic appeal, as does the wallpaper, reminiscent of vintage blanket patterns.
Designer: Alene Davis | Tulsa, OK
Architect: Jennifer Hartman, Sunlit Architecture | Crested Butte, CO
Builder: Hargrove & Kidd Construction Co. | Crested Butte, CO