Designing a custom home in the mountains is a dream come true. There’s no doubt you envision an open concept, incredible uninterrupted views of the landscape, and natural materials that echo the surrounding forest—but did you know that there is one architectural element that can check off all these boxes, all while providing form and function?

Enter: the timber frame. Reminiscent of churches, estates, and barns, this typically triangular feature is structural, rustic, and truly connects the indoors with the outdoors.

More often than not, owners of luxury mountain homes crave seamless open spaces where their friends and family can easily feel connected and engaged, no matter the task at hand. When designed to bear the load of the roof above, timber frames remove the need for unnecessary walls and partitions—making these open great rooms even more intuitive. Timber frames usually go hand-in-hand with large, floor-to-ceiling windows and roof overhangs, beautifully framing the mountains beyond and creating a continuous flow from the indoors to the outdoor living spaces and then to the landscape beyond—as well as in the opposite direction. Crafted of gorgeous Douglas fir and oak, the “timber” part of timber framing is also a fool-proof way to add nature-inspired materials and texture to a space.

There are various forms of timber frames—one for every flavor of design style. Whether you prefer the rustic look of traditional mountain lodges or the clean-lined, midcentury vibe of “mountain modern,” these forms are bound to make your dream mountain home a reality. 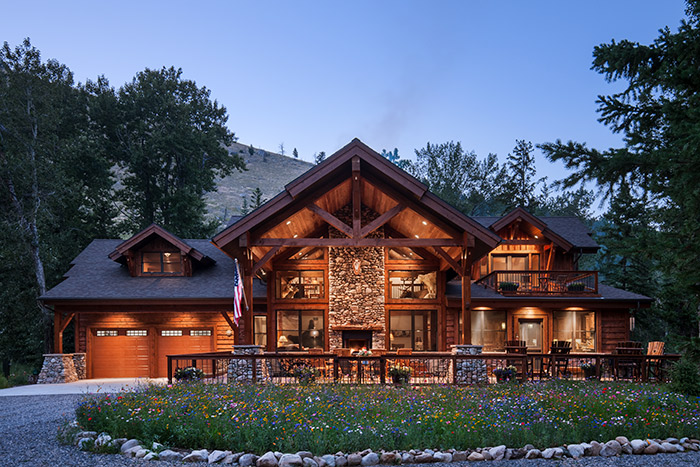 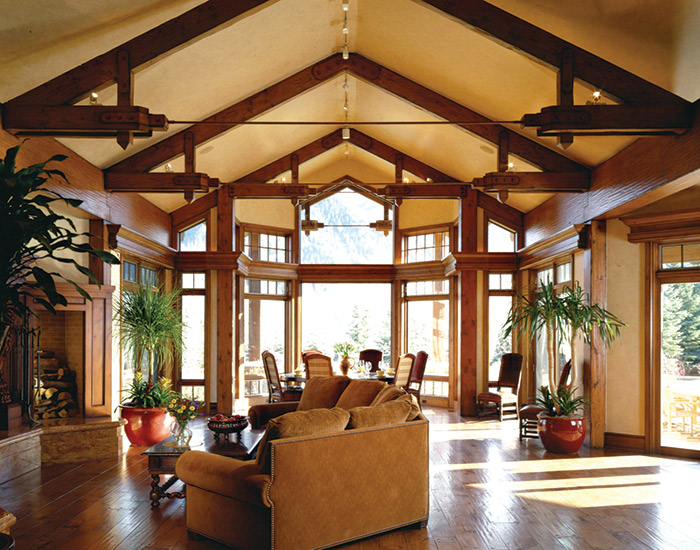 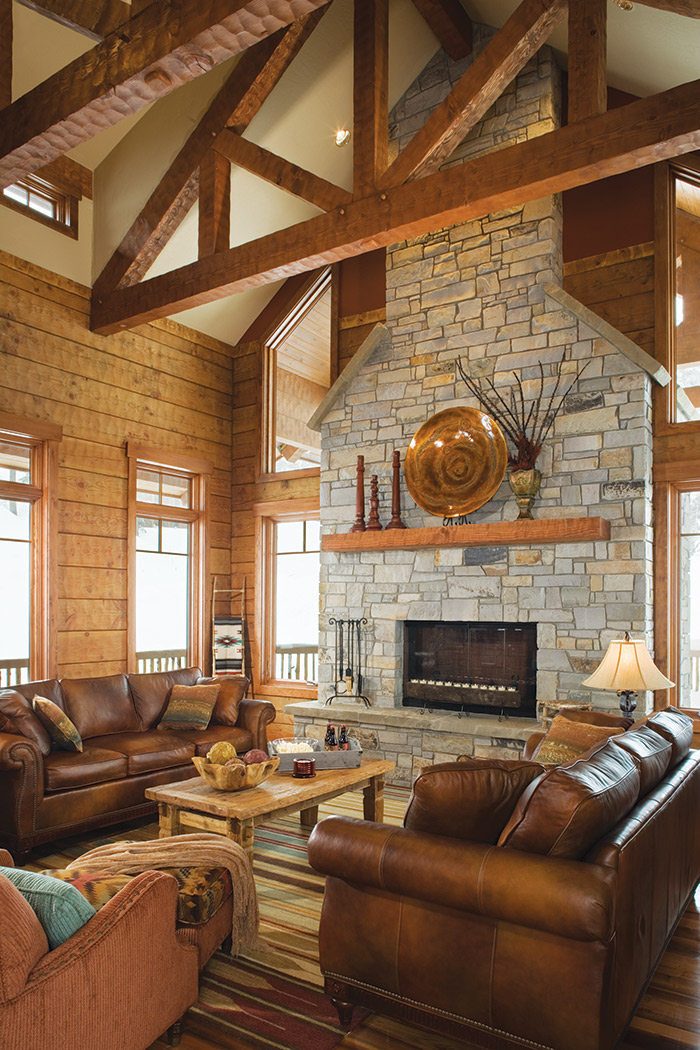 There are many possible variations on the king and queen post trusses. You can combine king and queen posts in one truss and add other elements like struts, collar ties, and bracing. In addition, a post can be “passed through” the bottom chord to create an ornamental finial.  This approach creates a more stylized look; the more wooden pieces you add to the truss, the more character and charm you get. 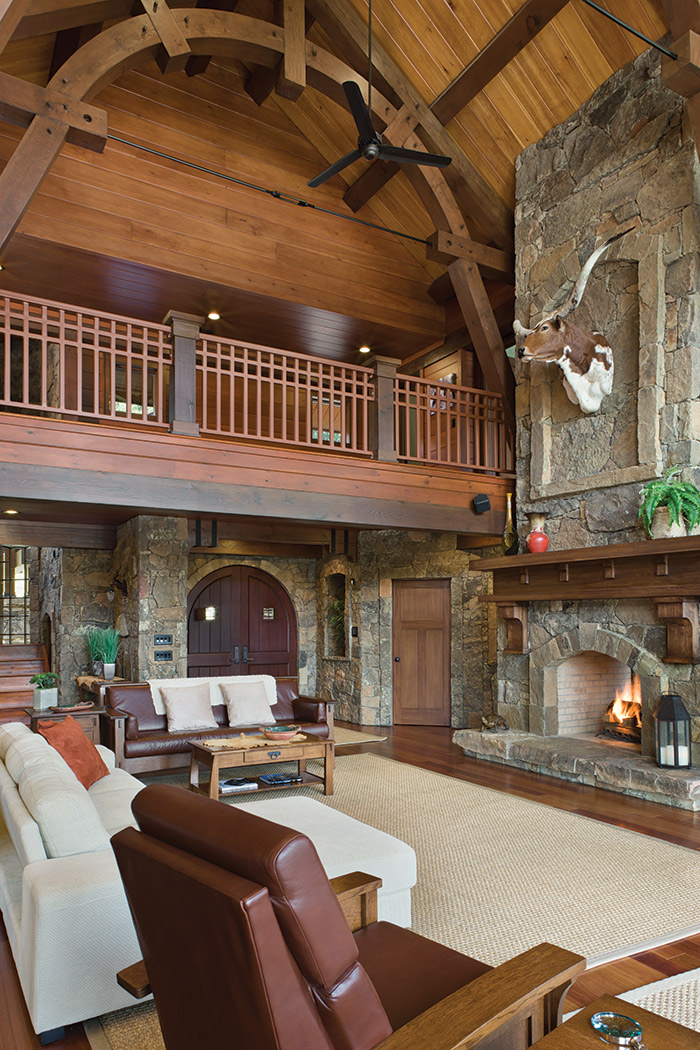 A barrel truss is a special form of truss because it features a curve where you don’t expect to see one. The curve draws the eye upward toward the ceiling and creates a profound sense of openness. Because of the curved lines not typically associated with timber framing, the barrel truss supports a more modern design style. 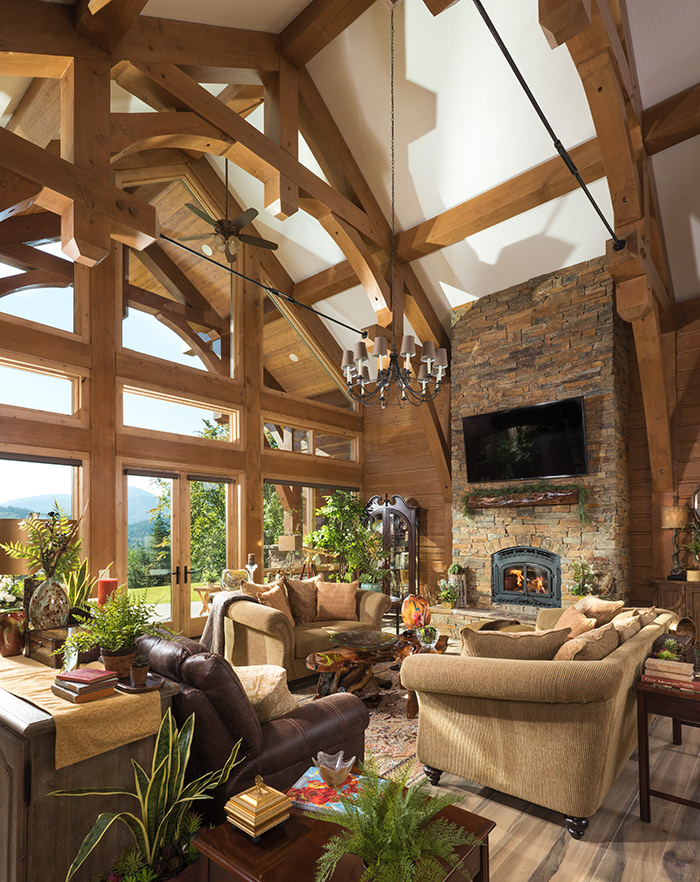 An even more complex truss form is the hammer beam truss, with a handful of moving parts and pieces: top chords, a short king post, a collar tie that connects the two queen posts,  two bottom chords, and often a metal tie rod connecting the bottom chords, which mitigates the structural strength lost when the bottom chord is cut. Additional bracing can also be added where the truss connects to the posts to help carry the structural load. Hammer beam trusses often feature ornamentation, such as braces or finials. 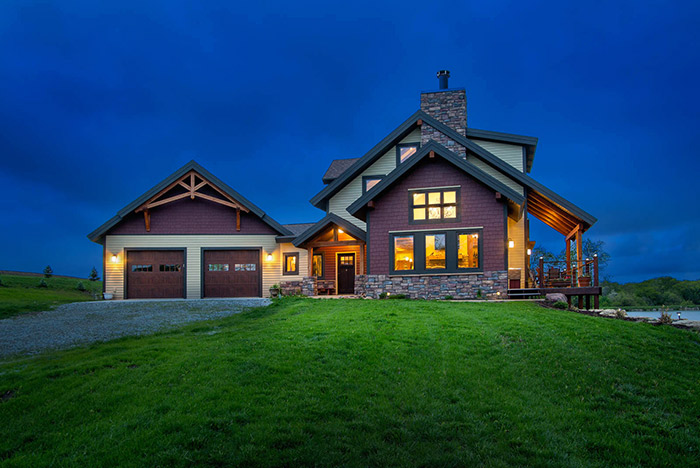 Photo by The Hilliard Photographics Group

Scissor trusses boast top chords and two bottom chords set at angles, connecting the bottom corner to the opposite rafter and mimicking the look of a pair of scissors. Scissor trusses are among the weakest of all trusses since they do not have a solid bottom chord to carry the structural load; they are typically used in a non-structural, decorative manner, oftentimes adding visual interest to the exterior of the home. 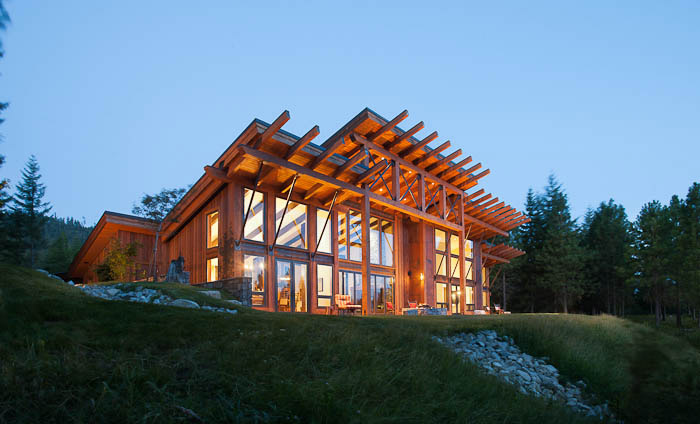 The rafters of modern architecture are what we refer to as the “top chords” when we talk about a full truss. So, rafters by themselves can add an extreme amount of architectural interest to a home, especially if it’s a minimalist or modern home with flat roofs set at jaunty angles. We often see exposed metal in modern architecture, and rafters are a great way to mix industrial and organic materials—resulting in a smart juxtaposition of wood and metal.

At the end of the day, you cannot go wrong with incorporating timber framing into the design of your dream mountain home. Pick your favorite elements from any (or all!) of these forms to customize an alpine retreat that is uniquely yours.

Celeste Haase is the Design Manager of M.T.N. Design, the award-winning, in-house design firm for PrecisionCraft Log & Timber Homes, a company that has been creating distinctive mountain style homes for over 25 years. View their profile or contact Celeste at 800.729.1320.