A couple finds a place that's truly their own 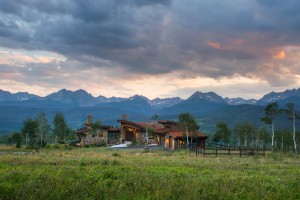 The couple spent a year touring mountain communities before finding the picturesque 35-acre lot in Summit County for their home. They realized they had to build their dream home from the ground up. | Photography by Ric Stovall

When the homeowner and her husband began looking for a Colorado vacation home several years ago, she was absolutely clear about one thing: she would never build a house. “I had heard too many horror stories about how building was so much work and how it basically becomes a full-time job,” she explains. So the couple spent a year touring existing homes in numerous mountain communities. Still, nothing felt quite right. “We wanted something remote. We figured, why go to the mountains and then live in a neighborhood? We didn’t want to be right in town,” she says. On a whim, they checked out a picturesque 35-acre plot and finally realized they had no choice: They had to build their dream house from the ground up. 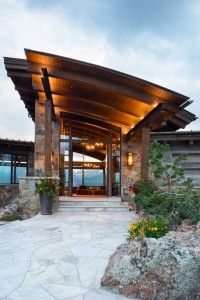 Architect Hans Berglund is known for his distinctive curved roofs and organic shapes that relate to the topography, along with materials such as exposed steel, stone and wood.

Once that was decided, they threw themselves into the project completely. They assembled a team that included builder Ivan Stanley, architect Hans Berglund and interior designer Dixie Niichel. And instead of gathering around an office conference table to map out the specs, everyone met at the property clad in hiking gear. Berglund was also outfitted with a portable table and chairs and a big backpack filled with supplies. “We hiked a good quarter of a mile up a steep hill,” he says. “The homeowners had a pretty good idea where they wanted the house, so that’s where we landed. It was sort of an obvious place because the views are incredible.” 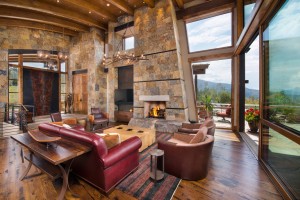 The homeowners accompanied the designer to a quarry to handpick the custom blend of rocks on the hearth. Table by Mimi London.

Together, they spent hours talking, planting stakes and ribbons and pacing out the house as Berglund sketched. “We were able to walk around to get a sense of the orientation and the possible views. It’s a great, interactive way to design,” the architect explains. Niichel agrees: “This was the first property that the homeowners had custom-built, so it was important to be able to all come together and discuss how they wanted to really live in the space and how they entertain. We talked about what the exterior should look like, too.”

On the latter topic, everyone was pretty much on the same page, in part, because the homeowners had seen and liked the architect’s work in the pages of a magazine, and they knew Ivan Stanley’s work through a reference from friends. “They were drawn to our distinctive look. We’re known for curved and organic roof forms reflective to the topography as well as our synthesis of natural stone, wood and timber with exposed steel and glass,” Berglund says. 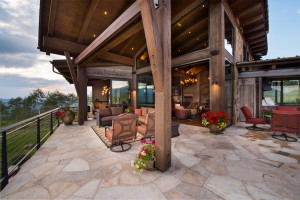 Multiple sitting areas beckon outside including a cozy living area, al fresco dining area and a fire pit surrounded by an abundance of Adirondack chairs. “No question, everyone’s first choice is to sit outside,” says the homeowner. “They all go straight out there and fight over the chairs.”

From the start, the couple also knew they wanted a mix of organic materials inside and out, although they had a better idea of what they didn’t want as opposed to specific must-haves. “I spent a lot of time with the homeowners, and we looked at options that work well together,” says Niichel. “We even went to a quarry and handpicked the custom blend of rocks on the hearth.” In addition to the hearth stones, moss rocks, Douglas fir beams, reclaimed oak flooring and steel beams come together in a retreat that’s a just-right blend of rustic and refined. “My husband was pretty adamant on one thing: If there were going to be steel beams visible, they needed to be structural,” the homeowner says with a laugh. 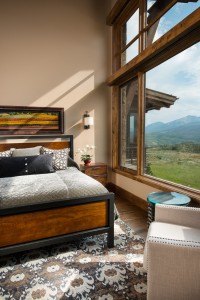 Guest rooms all come with amazing views and a personal en suite bathroom.

Now that the 6,840-square-foot, six-bedroom, eight-bathroom home is complete, the couple says they couldn’t imagine a more perfect space for their family and friends to gather. As for the woman who was so dead-set against building? She’s actually finishing construction on another brand-new project—this time, the couple’s primary residence. “I was surprised. It really was a fun process,” she concedes. “Most people said I would never want to do it again after doing it once, so it’s a real nod to Ivan Stanley, Hans and Dixie that I actually did.” 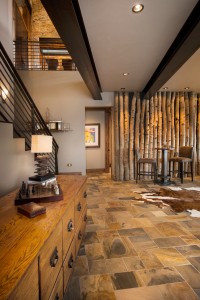 Downstairs, the basement has been converted into the ultimate entertaining space. “When the homeowners first arrived, there were a lot of aspens on the lot. When we had to cut some down, I had them dried out and placed on the wall,” says Niichel. “They bring a real feeling of the outside in.”

ROOMS WITH A VIEW

The main reason to own a mountain home is, well, the mountains. Here, designer Dixie Niichel provides her tips for creating well-appointed interiors while also keeping an eye on the prize. 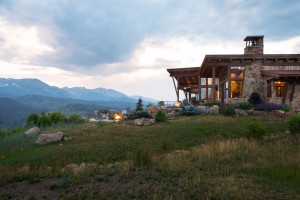 The homeowners hiked about a quarter of a mile up a hill to select the site for their home with incredible views.

PICK THE RIGHT PALETTE Because the stunning landscape just beyond the floor-to-ceiling windows is a natural focal point, Niichel took care to furnish all the rooms in a well-grounded selection of earth tones. “We wanted the interiors to blend in with the site,” she says. “The homeowner is drawn to neutrals, but we added a few pops of color in accessories like rugs and pillows.” PILE ON THE NATURAL RESOURCES Often the best way to bring the outdoors in is to physically do so, and this house positively teems with elements ranging from moss rock, reclaimed oak and Douglas fir to rustic walnut, slate and more. Even the furnishings take their cues from Mother Nature. “The homeowner wanted to use a lot of leather,” says Niichel. “We balanced that material with textured pieces like the coffee table made from timber and some textiles.” LET THERE BE LIGHT Niichel, a former lighting designer, has an affinity for creating cool installations up above. In the downstairs entertaining space, she hung a grouping of elegant pendants above the sectional. “A lot of times lighting is not supposed to be seen—it’s there to meet needs,” she says. “But that area needed something, so I suggested these lights. They reflect and sparkle like the sun and create this great radiant pattern on the ceiling.”