Spectacular Views Built on the Crags of Lake Tahoe

Mark Twain “moments” are fairly commonplace in Northern California—the American humorist’s oft-quoted, and sometimes misattributed observations of the region are stitched into the local lore.

The musings can be melodramatic (“The coldest winter I ever spent was a summer in San Francisco”) or, in the experience of John and Jill Waid, right on the money.

A trip to Lake Tahoe nearly 20 years ago left the Texas couple awestruck. They found a kindred spirit in Twain, citing his reflections on the area—documented in his 1872 pseudo-memoir, Roughing It—as their logic for building a North Tahoe vacation home: “…at last the Lake burst upon us—a noble sheet of blue water…walled in by a rim of snow-clad mountain peaks…I thought it must surely be the fairest picture the whole earth affords.”

“We were most certainly changed by the beauty, but the sunny and mild climate was a welcome departure from the high-heat humidity of the Gulf Coast,” John explains. In 2007, the Waids acquired a challenging site—a scree field that gains an impressive 200 feet in elevation over a mere 1.2 acres—considering it the price to pay for the jaw-dropping views of the lake they desired. Straight-talking local architect Joel Sherman was tasked with designing a second home for the couple that was neither a traditional log cabin nor an attempt at modernism in the mountains.

“I don’t like the term ‘mountain modern,’” says Sherman, principal of Truckee-based JLS Design. “Especially when it’s earned by gluing a piece of steel to the front of a house. Integrity—of design, of materials, of the use of the land—matters.”

Determining a way to step lightly on the rocky terrain was Sherman’s first order of business. While “cutting the heck out of the hillside,” as he says, might be a foregone conclusion for less earth-minded architects, Sherman devised a series of towers that float the home above the scree field, lifting it over the power lines for a clear 270-degree view of the lake. Clad in a glacier stone veneer for lighter footing, the towers root the home to the land in more ways than one.

To create a sense of place, Sherman used a range of regional materials that extend from the exterior into and throughout the home’s interior spaces. “I don’t like the idea of using expensive material on the outside and cheap drywall on the inside,” he explains.

The roaming structure—a steel bridge connects the lower level, including a garage and guesthouse, to the upper-level, 4,300-square-foot main house—is thoughtfully rendered in a classic mountain palette: glacier stone, slate, steel, glass and redwood. Of the last, Sherman notes that it’s best used sparingly, not just because of the flammability of a house wrapped entirely in timber, but also because an excess of anything diminishes, says Sherman, “the celebration of it.”

The beauty of these locally sourced materials is only part of their purpose; Sherman is also a proponent of using the elements for their inherent structural value. “That’s what I mean by integrity,” he says. For example, steel is great for horizontal spans, which is why you’ll find it in its raw, industrial beauty shoring up the cathedral ceilings and the spans that connect the towers. Stone is enduring—it’s fireproof, critter-proof and weatherproof. And glass is used generously in the architecture for obvious reasons. Says Sherman, “My sole job was to not screw up that view.” 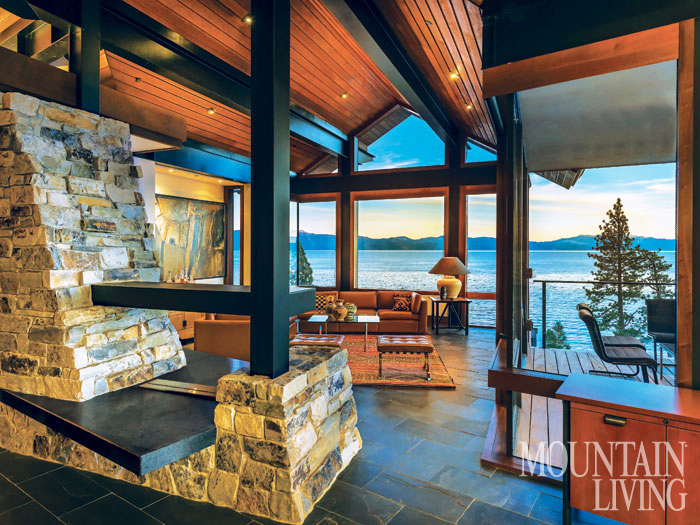 To achieve an unobstructed view of the lake, architect Joel Sherman designed a series of stone-veneer-clad towers that tread lightly on the land and elevate the home above nearby power lines. He referenced those distinctive architectural forms in the living room, where a “deconstructed tower” functions as the hearth. Industrial steel beams support a handsome sapele wood-clad gabled ceiling. 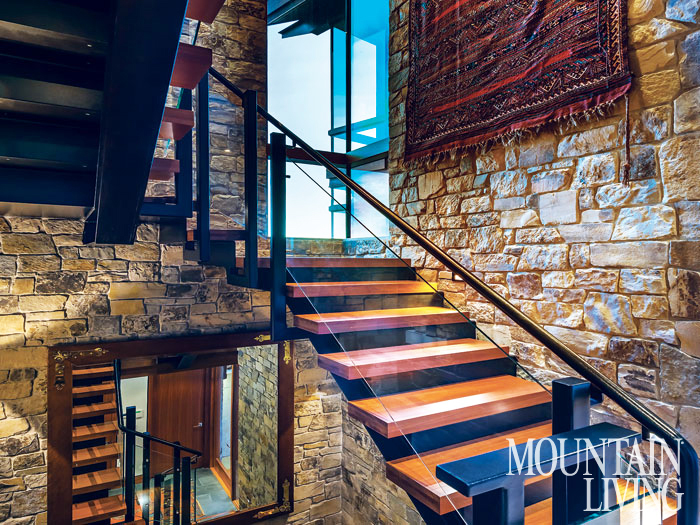 Sherman believes in using a consistent palette of building materials throughout a home, from its exterior to its interior spaces. Here, a stairwell is clad with the same rock used on the towers’ exterior walls. 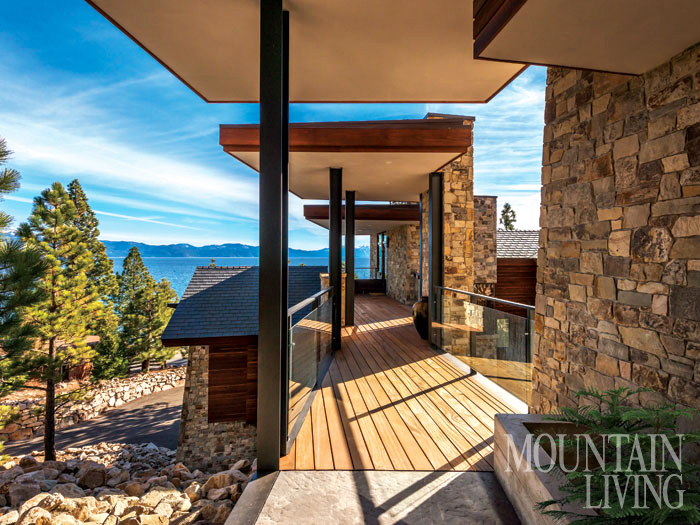 A partially covered bridge, shored up with steel and paved with wood decking, connects the garage and guesthouse to the main house. 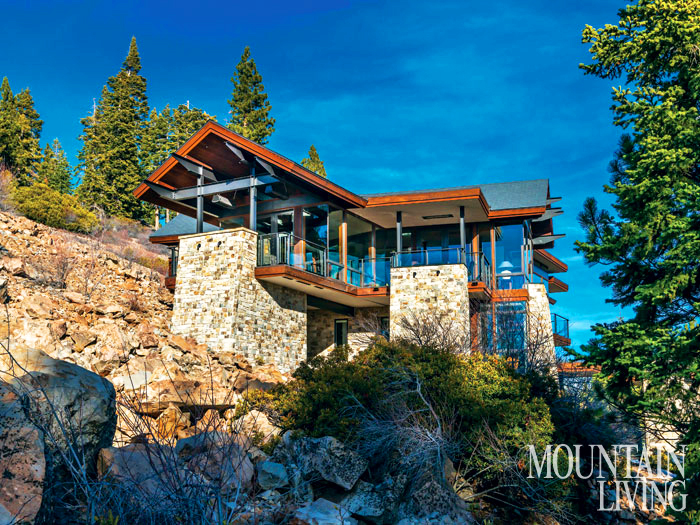 The dining wing, which includes an outdoor dining deck, occupies the southwest corner of the house. 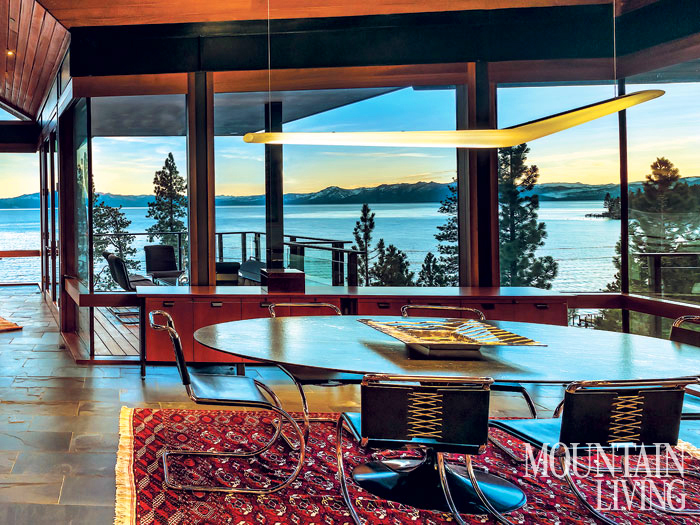 Another outdoor space adjacent to the dining room is known as the cocktail deck, and has been the site of many a sunset toast. 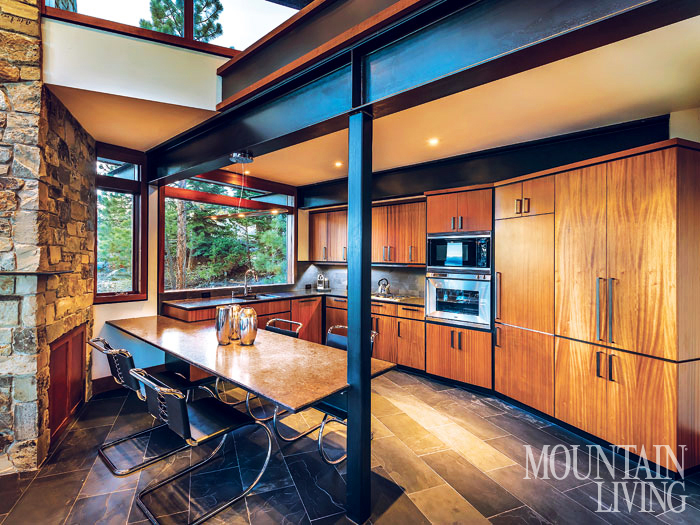 The guesthouse reflects the design of the main residence with slate floors, redwood cabinetry, stone
walls and steel beams. 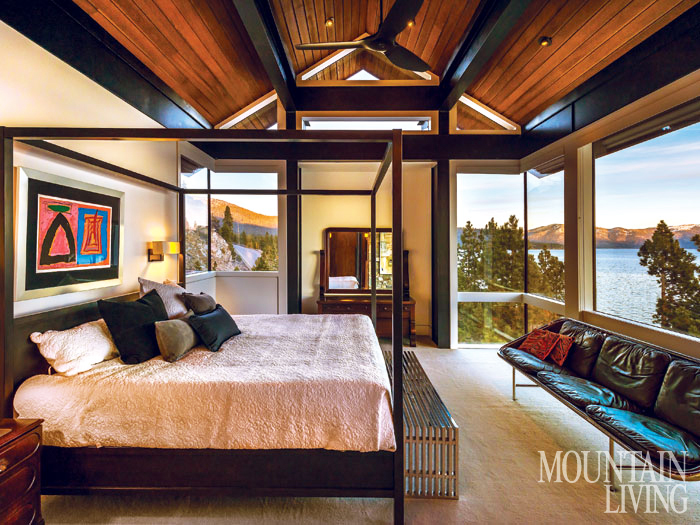 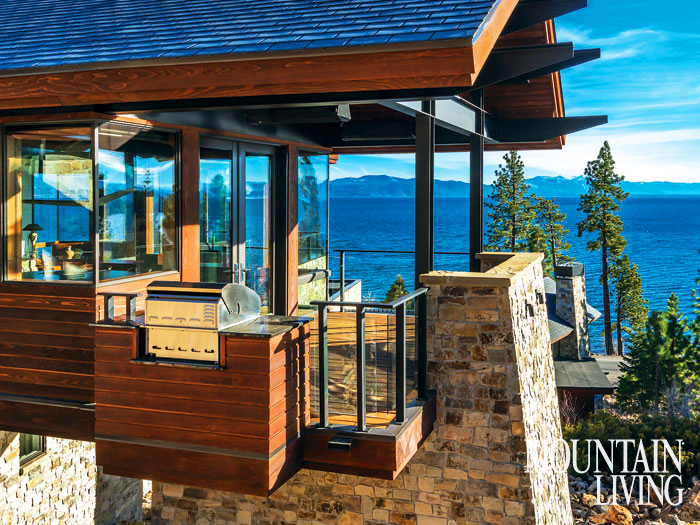 The towers are clad in a glacier stone veneer. This design allows parts of the house to “float” above the scree field, minimizing the structure’s impact on the land. 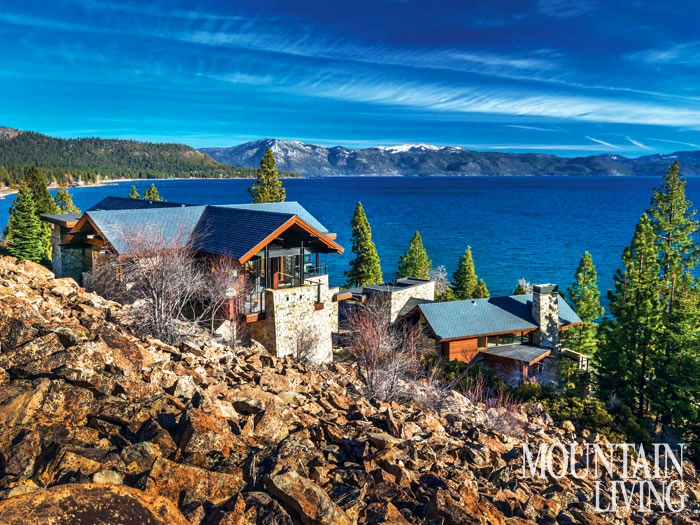 Homeowners John and Jill Waid agreed with American author Mark Twain’s assessment of Lake Tahoe as “the fairest picture the whole earth affords.” They found a perfect perch for their vacation home on a hillside overlooking Agate Bay on the lake’s north shore.