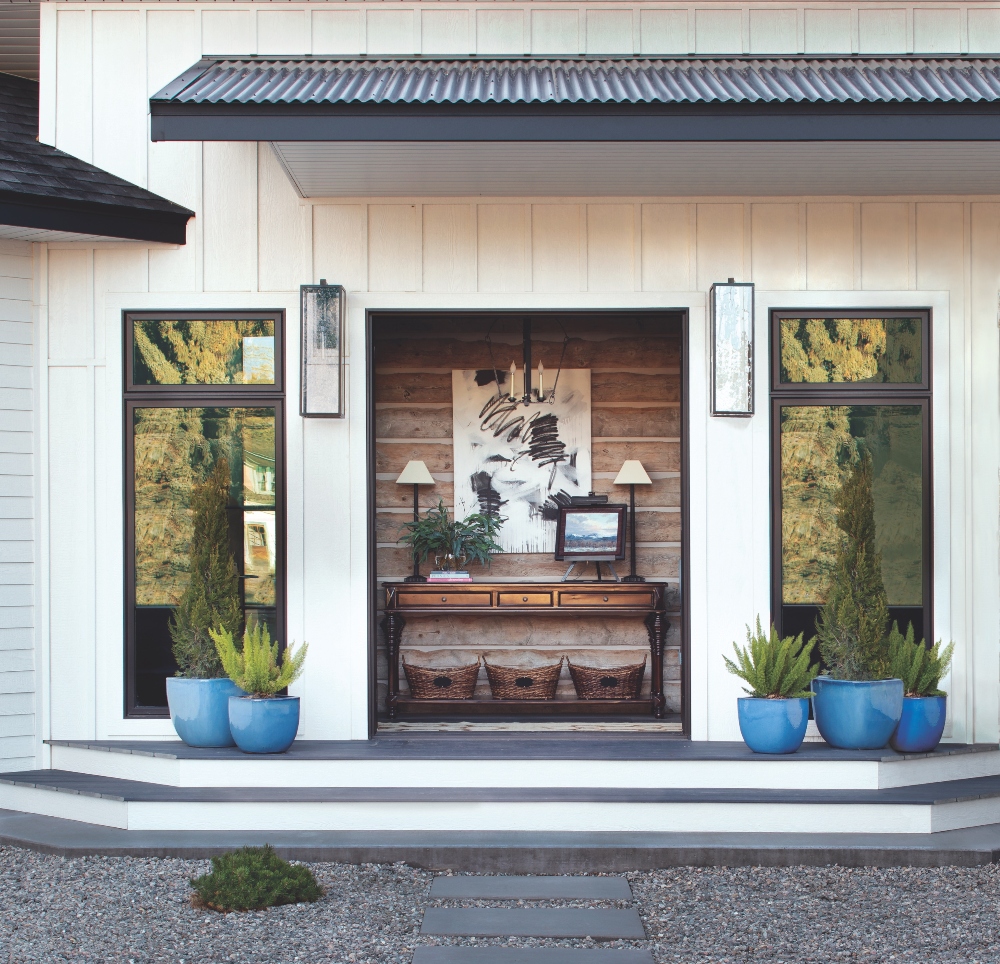 Cooler summer weather is only one of the many reasons that Scottsdale, Arizona, residents Scott Harkovich and Heather Blue Harkovich, an interior designer, fell in love with Ennis, Montana—a no-stoplight community with loads of small-town charm and unparalleled mountain vistas. “It was so different than anything I’d ever known,” Scott says. “It’s so peaceful here. It really recharges you.”

That sentiment runs in the family: Heather’s father has been fly-fishing on the Madison River in Ennis for more than four decades. While her parents looked forward to Heather and Scott’s long summer stays, however, they weren’t so keen on cohabiting with the couple’s two Belgian Malinoises, Faust and Rue. 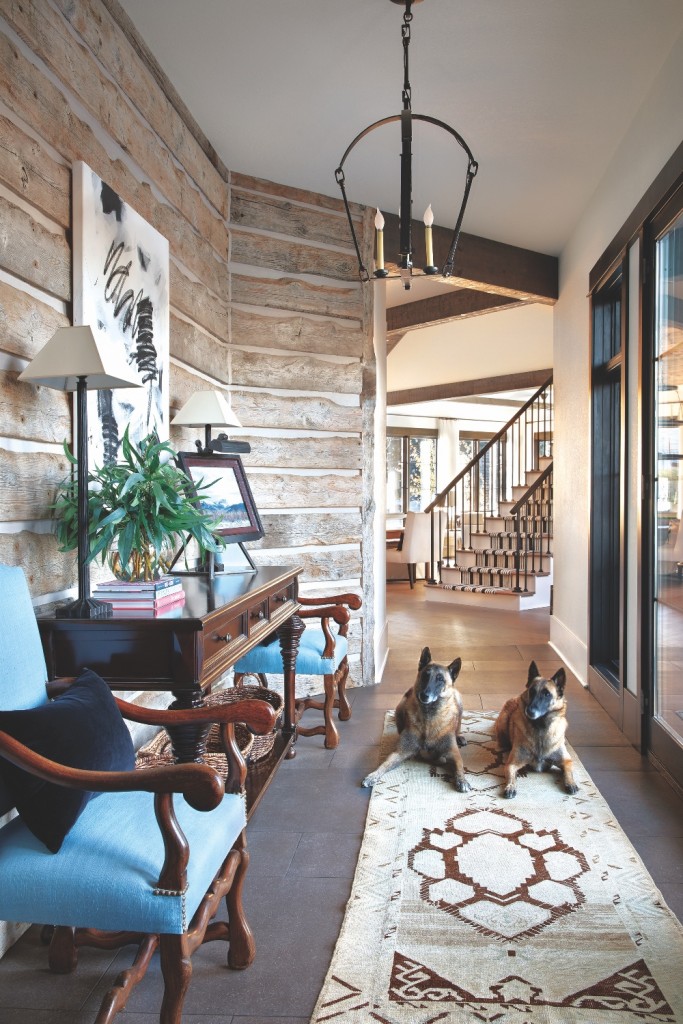 To keep the peace, Scott and Heather bought a neighboring lot with views of the river and asked professional home designers Steve and Carla Farnam and local builder Jerry Clark to design and construct a home of their own. The same team had previously built Heather’s parents’ house. “It’s like a family compound,” Steve Farnam says.

Before they began building the house, Clark rehabbed an existing one-room dry cabin on the property, adding insulation and plumbing for a new kitchenette and a bathroom. “It’s nice, tight and cozy,” Clark says. Once it was finished, Heather and Scott moved in for the summer while the main home was being constructed, which is angled toward the Madison River and the mountains beyond.

A bespoke fixture by Heather Scott Home & Design illuminates the island in the open kitchen, which is outfitted with classic white cabinetry, Colorado Yule marble countertops and a custom plaster hood with a wood edge that ties in with the ceiling beams.

Clad with bright white siding juxtaposed by black metal-framed windows, the dwelling offers a striking contrast to the area’s many wood-and-stone lodge-like abodes. As does the covered porch, which is built on a 45-degree angle from the house. Its steel fireplace with a black corrugated metal chimney “makes the house look so much more unique,” Scott says.

Working closely with the construction team, Scott installed the salvaged corral boards on the walls in the front entry, which leads either to a mudroom and garage or to a spacious great room.

There, a sleek blackened steel fireplace plays off of the white walls and textiles. “I do so many houses in so many different colors,” Heather explains. “When I come home, I want a really neutral palette. It’s more restful.” 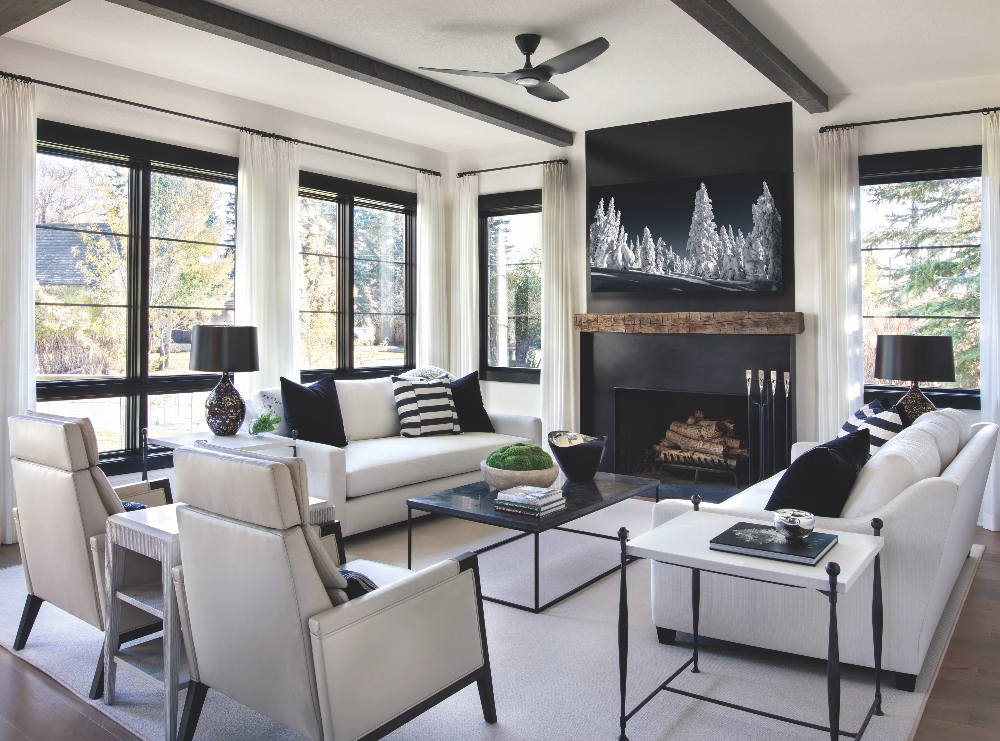 A fine art photograph by Tracie Spence Photography pops against the custom metal fireplace in the elegant and inviting living room. The tailored sofas are by Brownstone Upholstery.

That sense of simplicity also informs the open kitchen, which the couple outfitted with taupe floor-to-ceiling cabinetry, light Colorado Yule honed marble countertops and a streamlined plaster hood with a wood edge that ties in with the ceiling beams. Walking the line between rustic and modern, a linear lighting pendant made of copper piping illuminates the stained center island. 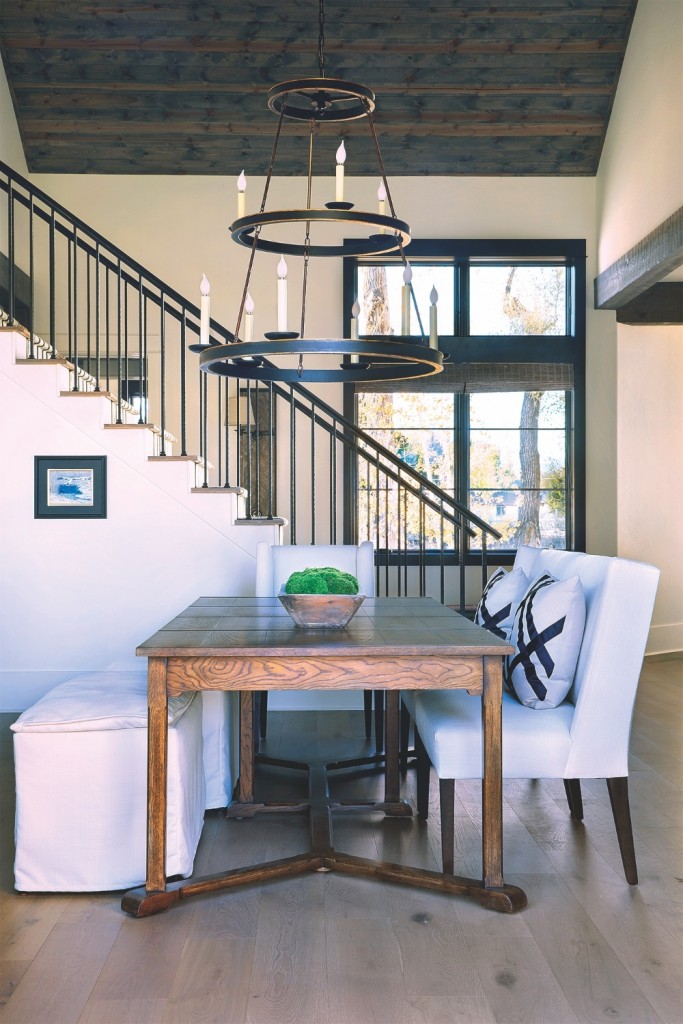 A tiered chandelier from Visual Comfort highlights the peaked ceiling in the sophisticated open dining area.

For more formal dinner parties, look no further than the adjacent open dining area, where a mix of seating that includes host chairs and plush ottoman-style benches surrounds a simple wooden table beneath a tiered chandelier that takes advantage of the 23-foot-high wood-clad ceiling.

While the palette is decidedly neutral throughout, there are punches of color and pattern—for example, the graphic cloud-patterned wall covering in a first-floor guest bathroom. And in the nearby bedroom, patterned green draperies draw the eye to the  tall hedges and evergreen trees outside. “We say our style is classic, chic and serene, and that was our guiding principle in making selections,” Heather explains. 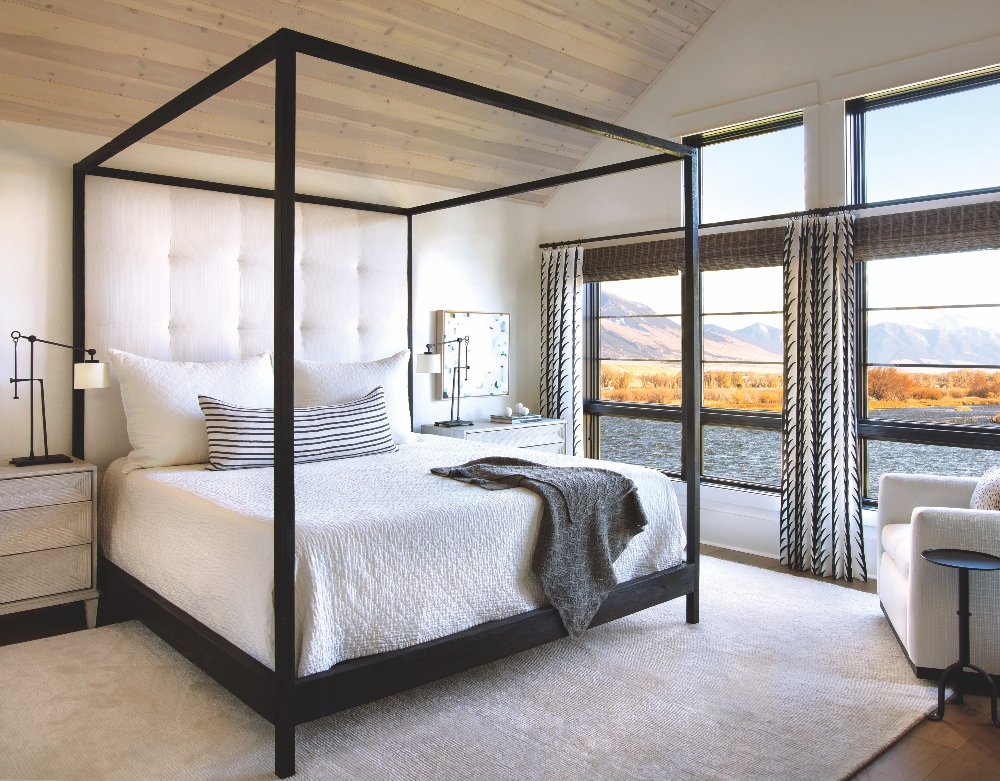 It’s all about the spectacular river view in the master bedroom, where matching wooden nightstands flank a four-poster bed with an upholstered headboard. 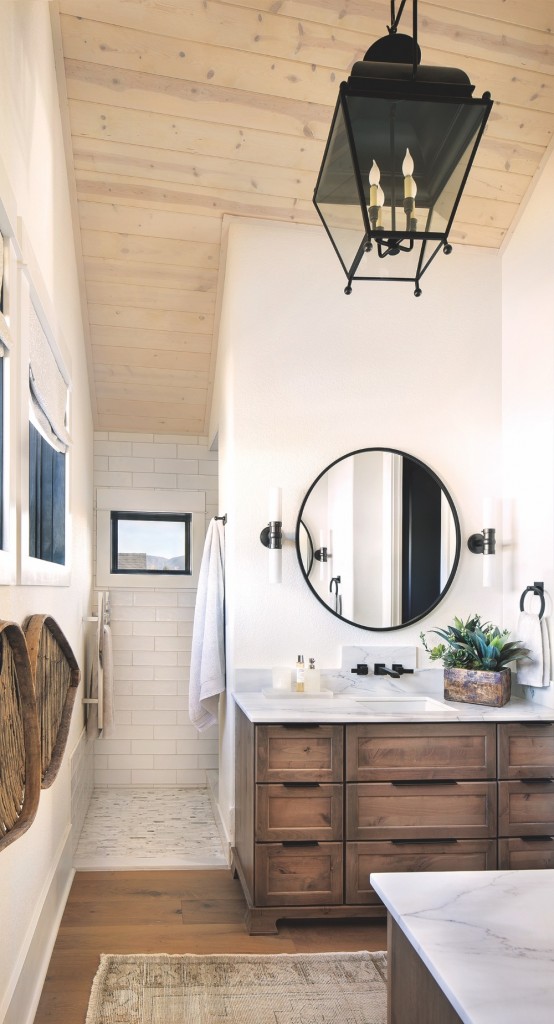 Scott, Heather and their pooches are overjoyed about how their home turned out, and their parents adore having them nearby. Perhaps absence (of canines) does make the heart grow fonder, because Heather’s dad sometimes joins her when she walks the dogs. The little burg’s downtown is steps away, “but at the same time, we can see the mountains and river and feel like we are out in nature,” Heather says. “It’s the best of both worlds.” 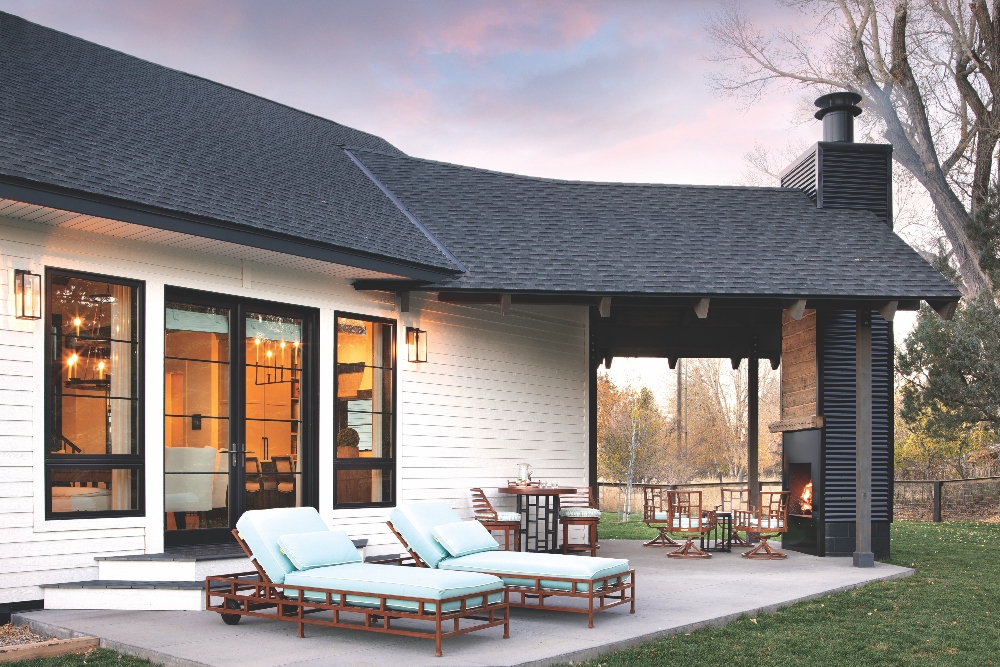 Built on an angle from the house, the covered porch features a black metal-clad fireplace with a reclaimed wood mantel.

While 2,300 square feet isn’t exactly tiny, it’s quite a bit smaller than many Montana mountain manses. But it lives large, according to Heather Blue Harkovich, thanks to the following:
A LIGHT-FILLED OPEN FLOOR PLAN Boasting beautiful views and tons of light, the living room, dining room and kitchen open to one another, creating the illusion of a larger space. “Everybody who comes in says, ‘Wow, this looks really big,” Heather says. LOFTY CEILINGS  The ceilings in the living room and kitchen are 10 feet tall, and the dining room between them boasts a vaulted ceiling that is 23 feet high at its peak. NEUTRAL PALETTE A simple palette of white walls, black window framing and warm wood accents allows the eye to focus on the lush exterior, essentially bringing the outside in. “Your eye goes straight outside the back windows to the river and mountains,” Heather says. FLOATING FURNITURE The powder room vanity’s feet do not go to the floor, which makes the space feel larger. “It’s a tight space, so we wanted to keep it open and not too heavy,” Heather explains. SPACIOUS OUTDOOR LIVING A covered porch with its own fireplace creates a large indoor-outdoor space that extends the usable living area. The result feels far more spacious than its compact footprint.