This fresh, airy and cleverly designed Aspen condo seems bigger than its size

When Danielle and Paul Davidson first saw the condo that would ultimately become their pied-à-terre in Aspen, they were not impressed. “It was an eyesore,” says Danielle. “Very small, very ’60s, and the floor sloped about six inches from front to back.” But the New York-based couple was enchanted by the views and thrilled that it sat right at the base of Aspen Mountain (she skis; he’s a snowboarder).

Originally two separate units, the condo had been married into one living space, “but poorly,” says Paul. The Davidsons immediately contacted Charles Cunniffe Architects, a blue-chip Aspen firm, to create a new floor plan that made the two units work and flow as one small (1,200 square feet) but very livable two-bedroom home.

“It was both an interesting and a challenging project,” says Cunniffe. “The building is situated on a steep street. It’s nestled into the mountainside … and it had settled considerably during the past 50-plus years.”

Cunniffe worked with Aspen-based contractor Craig Barnes to cure the deficiencies in the unit. “The southeast corner of that building has settled about six-and-a-half inches,” says Barnes. “Unfortunately the building didn’t settle in one direction but … settled with a twisting motion.” In order to make sure the walls, floor and ceiling were flat, level and plumb, “every joist, every stud had to be shimmed, planed or modified in some way,” he says. As far as taking care of the slope: Barnes cleverly created a 4.5-inch front step in the foyer. The hallway from the living room to the master bedroom absorbed about 1.5 inches. “So, it is really a bit of a ramp,” says Barnes. And the master bedroom still slopes about half an inch.

“The space is small, but it doesn’t ever feel that way.” — Homeowner Danielle Davidson

As senior project architect and director of interiors, Marina Skiles was the team member who oversaw the project. The Davidsons collaborated with Skiles on the interior décor; they conveyed their ideas via Pinterest boards. “The neutral palette was informed by the taste of the clients,” she says. “And using a narrow range of soft colors can trick the eye into thinking the space is larger than it really is,” she adds.

Danielle found a dining table (on casters) at a restaurant supply warehouse. In a small space, the commercial-grade table works as a dining table for six-to-eight people, as the buffet table for a larger crowd or as an extra countertop for Danielle, who enjoys cooking.

“We wanted to make the space as precise, clean and seamless as possible,” says Skiles. “If it does not have to be there, it is not there.” Built-ins—wrap-around cabinetry in the kitchen, a small closet magically eked out of a hallway—provide storage and keep clutter out of sight.

A brilliant exception is the antique crystal chandelier—a family heirloom—that hangs above the sleek stainless-steel dining table. The crystals refract light into tiny rainbows that shimmer across the room. “It was my grandmother’s,” says Danielle. “It adds so much warmth to the room, and I love that you can see it from the street.”

One of the other attractions is that their home has wood-burning fireplaces—one in the living room and a second in the master bedroom. Each fireplace was originally clad in heavy red-and-brown river rock. “We were able to add a feeling of spaciousness by taking the rocks out, floating a poured-concrete hearth and using monochromatic, linear stone as a fireplace surround,” says Cunniffe.

Because the views are especially important to the Davidsons, each room centers on the windows. “In every season and in all weather, we wanted to make sure the outdoors were highlighted like a piece of art,” says Paul.

The Davidsons have always lived in small apartments—in Chicago, Hong Kong and, now, New York. “Our Aspen home is even smaller but it doesn’t ever feel that way … thanks to the imagination and inventiveness of our amazing team,” says Danielle. unit. 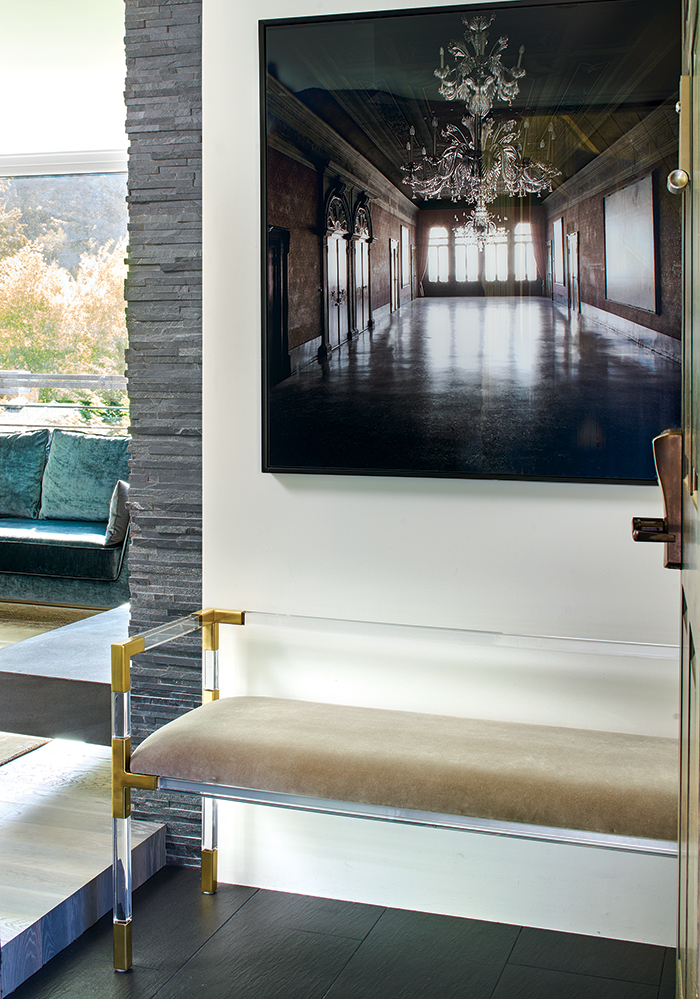 The foyer sets the tone. A photograph of a room with a monumental chandelier recalls the grandeur of European palaces and gives drama to the small entry. 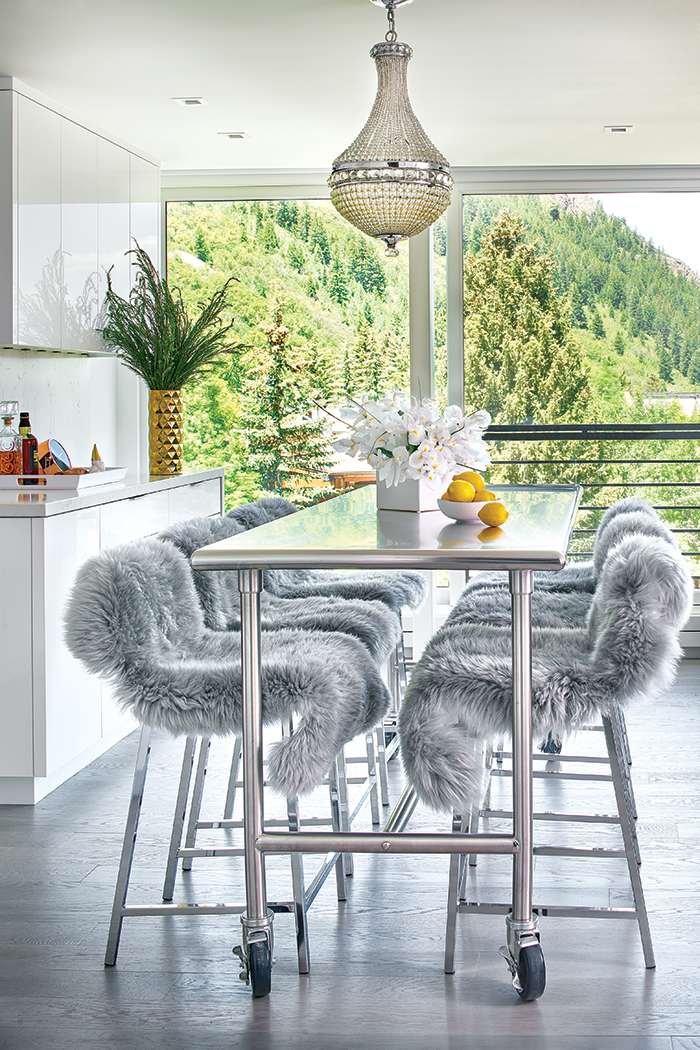 The antique chandelier, a little jewel in an otherwise contemporary room, was a gift from Danielle’s grandmother. The dining table (on casters) doubles as a buffet table for parties. 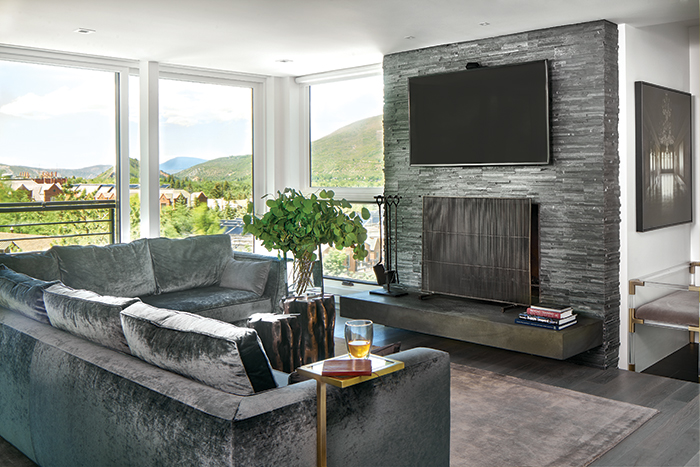 A comfortable sofa adds a subtle elegance to the serene room and echoes the clean lines of the Frank Lloyd Wright-inspired fireplace. Large energy-efficient windows flood the room with sunlight year-round.

Because the master bedroom is in close proximity to the dining room, both spaces were designed for a natural flow-through of color and texture. 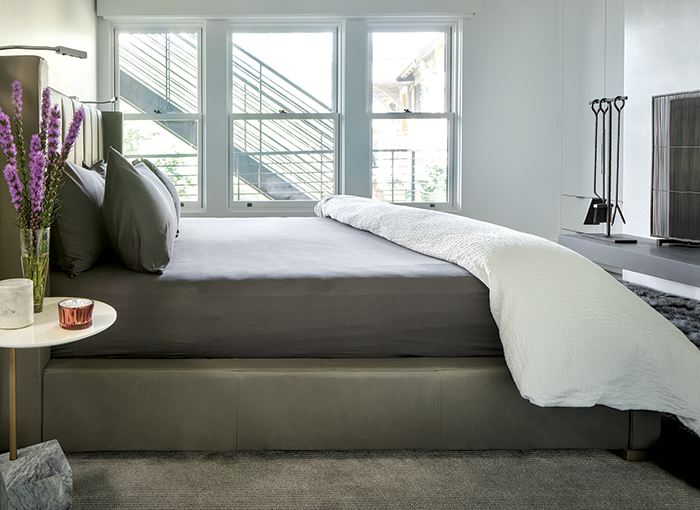 Closets were created in the unused space on each side of the bedroom fireplace. They were lacquered white to be unobtrusive. 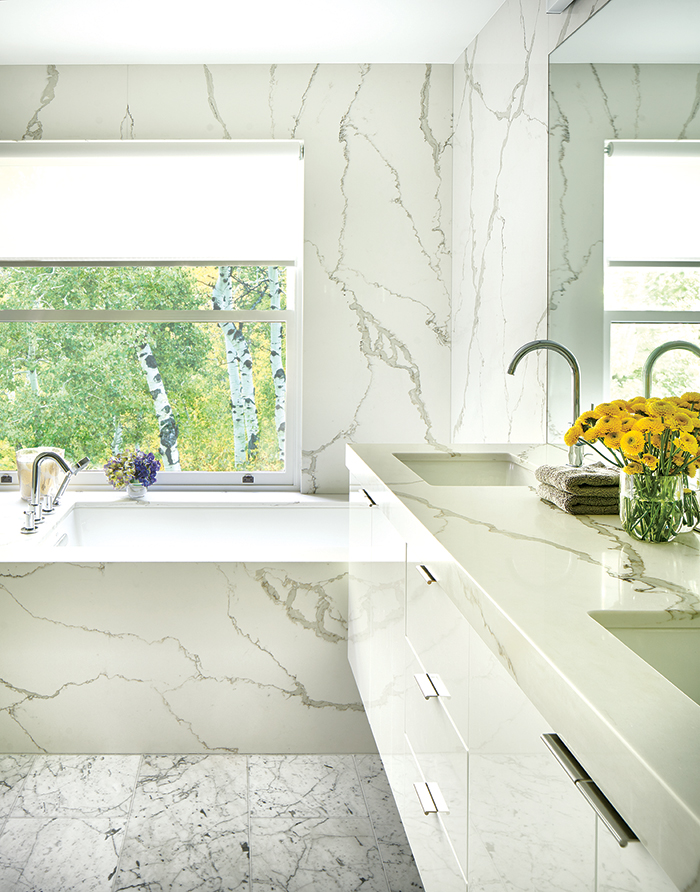 The large marble slabs used in the bathroom have prominent veining that had to be precisely matched, providing a seamless continuity of surfaces.

A Revival in Vail

A Condo With a Unique Stamp