Shingle Style for the 21st Century

Inspired by the work of turn-of-the-century California architects Greene & Greene, this new home on Lake Tahoe’s West Shore takes its cues from iconic Shingle-style homes—but with an updated twist. Instead of dark wood paneling, a signature of Craftsman homes, the interiors have been painted bright white, with fabric and upholstery that reflect the color that saturates its surroundings. “It was blue from the get-go,” says interior designer Sarah Jones. “Tahoe is one of the bluest lakes in the country, so picking up the colors of the lake and the sky was important.”

Taking advantage of Lake Tahoe’s vistas was utmost in the mind of Clare Walton, principal of Walton Architecture and Engineering, starting with the site. A 1950s ranch-style home was taken down to clear the way for the new structure that Walton situated at the back of the 22,000-square-foot lot, creating more lawn on the lakeside. The two-story home she designed maximizes lake views and natural light with strategically placed windows and doors to align with clouds and water peeking inside.

“There are neighbors on both sides, so we wanted to bring in light and not jeopardize any privacy,” she says. “It’s narrow, and there’s only a certain amount of space on the ground level, [along with] a lot of vertical elements to maximize the square footage and minimize the building footprint.” 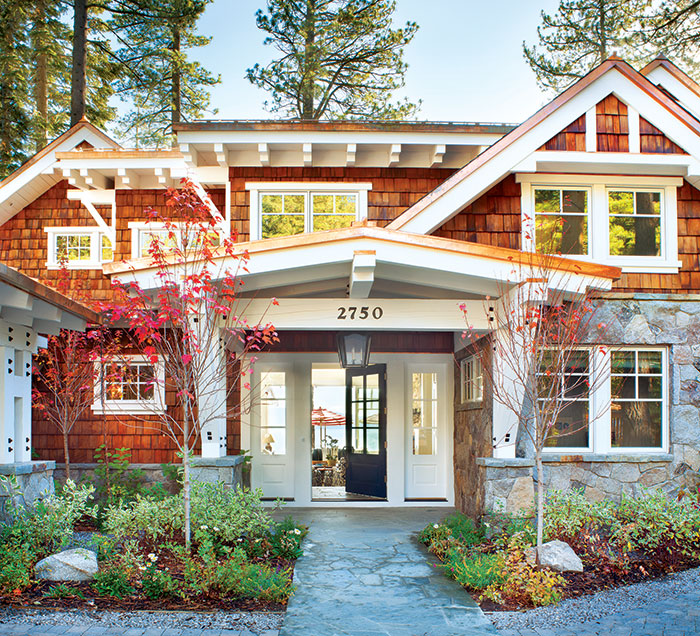 “The history is that there were a number of shingle-style homes built here in the late 1800s and early 1900s.” — The Homeowner

Native redwood shingles adorn the home’s exterior—a style that pays homage to Lake Tahoe architecture of the late 1800s and early 1900s. Over time, the copper roof and gutters will patina for a lived-in look. 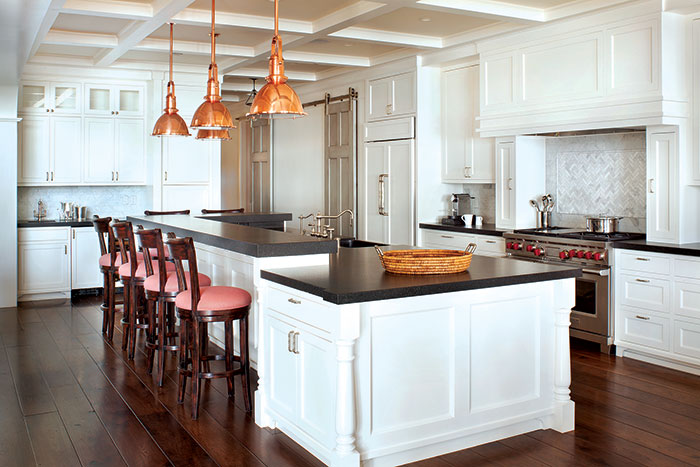 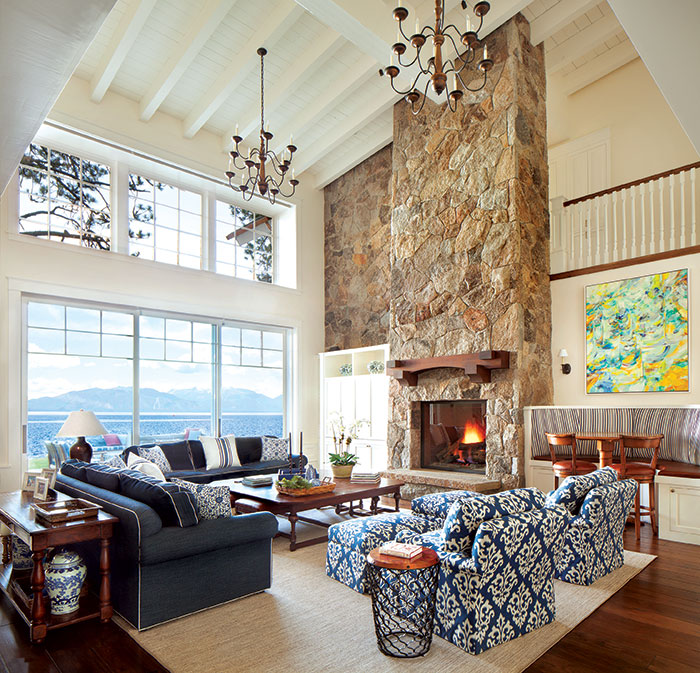 The homeowners, an empty-nester couple based in Rancho Santa Fe, California, asked Walton for a multi-generational lakefront home to accommodate their growing family. They have five children with spouses—along with two grandchildren now, another due in April and many more expected. “We wanted a gathering place for an extended family,” he says. “We’ve probably had 15-plus at one time; the bunk room [above the garage] sleeps 14.” 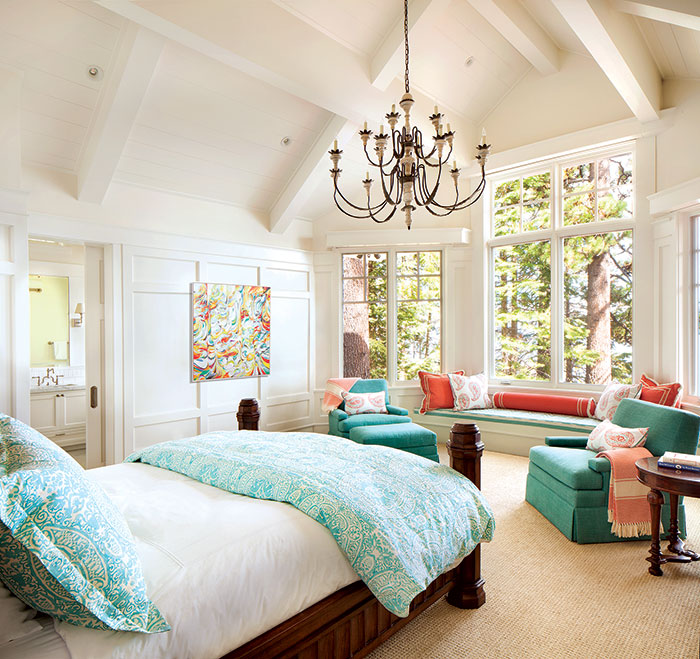 Walton designed a total of five bedrooms (including a master suite), five-and-a-half baths, a spacious great room with a granite fireplace and two-story chimney, a music studio, a family room that opens to a coffee nook, an office, a playroom and a library. Much of the ground-floor space encourages indoor/outdoor activity via sliding glass doors.

Tying it all together is Jones’ choice of a dark, durable and distressed hickory flooring. “It’s a hard wood and stands up nicely to abuse from dogs and kids and rocks and running in from the beach,” the interior designer says. “It helps ground everything and adds a nice pop of contrast to all the white; it actually brightens things up.”

The big idea for her interiors was that they be sophisticated yet comfortable, inviting and easy to maintain. Pops of reds and corals join colorful paintings commissioned to fill certain wall spaces. “We were thoughtful on the choices of fabrics, even for the sofas in the living room, to be sure they were durable,” Jones says. “And it feels just as comfortable for the two of them as when they have the place full of friends and family.”

The major driver for its architecture, though, was its location. “All the prime spaces take advantage of the views and really let the site sing,” Walton says.

On Lake Tahoe, that means a bright and cheerful tune.

Brothers Charles and Henry Greene were born in Cincinnati in 1868 and 1870. After earning architecture degrees from the Massachusetts Institute of Technology, they moved to Pasadena in 1893 to set up their architecture practice.

They launched their careers by rounding out the sharp edges of the Arts and Crafts (or Craftsman) movement—as though they’d looked at the work of Gustav Stickley and the Roycrofters and deliberately softened it.

Charles, the designer of the two, was influenced by Japanese architecture. They were careful to site their homes in ways that preceded Frank Lloyd Wright’s concept of organic building, creating a perception that they were growing right out of the ground. From 1902 to 1910 the pair designed about 150 homes.

The popularity of the Arts and Crafts style declined after about 1913, and Henry moved north to Carmel in 1916. They dissolved the firm in 1922 and fell into relative obscurity until the mid-1950s. That’s when they were rediscovered, and the American Institute of Architects issued a special citation for them, noting they’d created a new and native architecture, one that was uniquely American.