Sculpting in the Negative 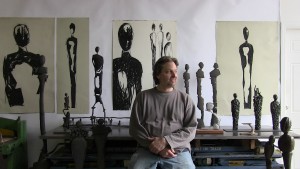 Meyer’s use of the human form borders on the abstract. “I want to speak to universal emotions that we all have,” says Meyer, “not just my subjective experience.”

Chuck Meyer’s dreamlike sculptures imply human forms, each suggesting an emotion or a state of mind. They are at once familiar and foreign, inviting the viewer to interpret their postures. A pair might be leaning in to whisper or supporting one another in a time of need; others could be standing guard or performing a ceremony. Art is in the eye of the beholder, and sculptor Chuck Meyer would be the first to point that out about his own art.“I believe there’s the artist, there’s the work, and there’s the viewer,” Meyer says. “It’s hard for me to separate any of those three things.” 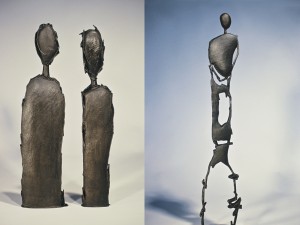 Meyer has achieved this effect through a lifelong artistic exploration, beginning as a child in Arlington, Virginia. “When I was about five or six,” says Meyer, “I would dig up clay in the backyard and make pinch-pots.” He worked with ceramics throughout high school and gravitated toward sculpture while attending Connecticut College’s art program, but his work usually starts with a drawing. In college, a professor taught him that his strongest line was his first. “‘Your strength is in not erasing,’ he told me,” Meyer recalls. “That means I do a lot of drawing.” 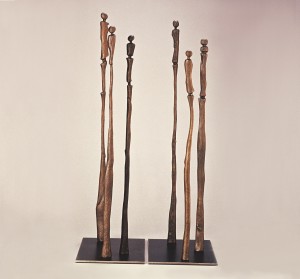 “Discussion Six” Cast Bronze 30’’ x 10’’ x 16’’, an example of Meyer’s experiments with group dynamics. “When you look at a single figure, it’s like you’re interacting with a single person,” says Meyer. “A crowd presents a totally different set of questions: how do I interact with a group, or who am I in relation to them?”

He has since worked for the Capitol Children’s Museum in Washington, DC, and for the Pratt Fine Arts Center in Seattle, and he eventually founded a fabrication studio in Seattle that he continues to run. Over time, he simplified his sketches of the human form until they approached the abstract. “I realized that I wanted to work with just what humanity is,” says Meyer. By distilling forms to their most expressive elements—a horizontal mark for the brow-line, for example—he works to express a fundamental humanity. 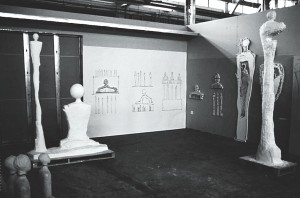 After selecting sketches to translate from two dimensions into three dimensions, Meyer carefully plans the final scale and medium for each piece. The drawings on the wall eventually became sculptures cast in a variety of mediums, including hot glass, bronze, and painted steel.

Today, Meyer’s process still begins with sketches. He draws for about 30 to 90 minutes, without setting a goal. “I’ll get into a rhythm and get some shapes that work,” he says. When he steps back to observe, an emotion often unifies the drawings. He then selects a powerful sketch, one that evokes a feeling. “Somebody else might look at them and not get the same emotion,” he says. “But I see them and think, ‘Yeah, I was angry or I was joyful.’ Like a Rorschach print.” Next comes the sculpting. 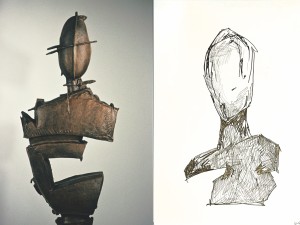 Where most people might imagine a sculptor chiseling a pillar of stone to reveal the figure within, Meyer’s method is the opposite. Using the sketch as a blueprint, he carves out the sculpture’s shape as a hollow in solid blocks of sand cast. When the blocks are put together, the negative space forms a mold, which can then cast the sculpture in its final material, be it gray iron, bronze or even concrete.

Meyer names the pieces based on what he feels the finished sculpture evokes to him, but they’re all open to interpretation. Everyone will connect a little differently. Each sculpture is a kind of negative in itself, a space for the viewer to inhabit with their own thoughts, feelings and experiences.