Sculpted Stories Made of Wood and Bronze

Artist Tyrel Johnson creates work that tells a story, often times one that resonates with childhood 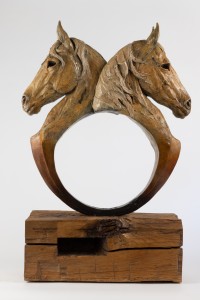 Johnson’s piece “Horse of Another Color” is made of bronze with a unique patina and base of hand-hewn oak beam reclaimed from a barn. | Photography by Jessica Hart

Tyrel Johnson’s sculptures capture moments frozen in time. A draft horse strains against a burden. A lynx pauses, alert. A woman encounters a whitetail stag. Each piece encapsulates a story, calling the viewer into its world. “My goal,” says Johnson, “is to hit people in a familiar place that’s warm, or that resonates with their childhood.” 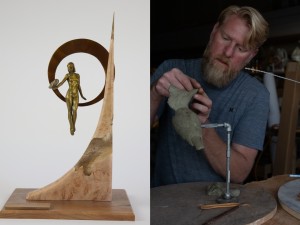 LEFT: “A Bird in the Hand,” made of bronze, maple and walnut, depicts a woman cradling an owl. RIGHT: Johnson sculpts the clay around an armature before sending the sculpture to the foundry for molding and casting in bronze. | Photography by Jessica Hart

His own childhood was spent in and around his father’s foundry, he remembers fondly. Never one to shy away from a challenge, Johnson grew up working with metal. From high school to young adulthood, he cultivated a love for woodworking and a talent for math. He started his own construction company, which he ran for years, but he was always an artist first. He never stopped dedicating himself to his craft. 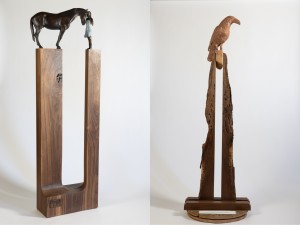 LEFT: “Undivided Love” is based on a friend’s bond with a horse. “There was a horse in a pasture on her drive home,” says Johnson. “She’d greet it every day. The owner eventually found out and gave her the horse.” RIGHT: A work in progress, this clay raven perches atop a twin pair of weathered walnut boards. | Photography by Jessica Hart

Johnson has made hundreds of pieces over the years, developing his style. “I didn’t want to take a shortcut,” he says. “I didn’t want to just create. I wanted to get it right.” Before ever showing his work, he studied anatomy for seven years to sharpen his technique, in order to later focus on expression. “An architect has to put in long hours at college,” says Johnson. “I don’t see myself any differently.” 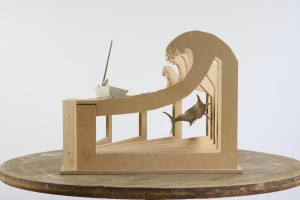 Based on Ernest Hemingway’s novel The Old Man and the Sea, this study for a work in progress is a perfect example of Johnson’s storytelling. “That book really hit me,” says Johnson. “The fisherman didn’t have the ideal tools or circumstances, but he rose to the marlin’s challenge.” | Photography by Jessica Hart

Over time, Johnson arrived at his signature pairing of wood and bronze. “It was like learning a new language,” he says. “That combination gave me a way to speak my voice.” In 2015, Johnson was ready to show his first piece, “The Huntress.” He had found that voice in the marriage of form and concept, in limiting his materials, and in clean lines and strong shapes. 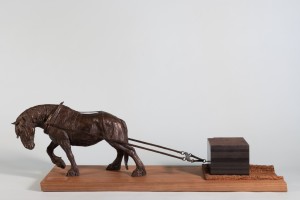 “Continuance of Action” evokes perseverance: a bronze draft horse strains against an argillite cube, dragging it through the walnut base. | Photography by Jessica Hart

Sometimes the inspiration for a piece comes over time and sometimes it arrives fully formed, but the physical process always starts with sketches. Johnson then drafts architectural drawings to confirm the dimensions before sculpting it in clay and, when the sculpture is ready, sending it to the foundry for casting. “I don’t do any foundry work anymore,” says Johnson, laughing. “I’d never have time for the rest if I had a foundry.” Mean- while, Johnson works the wood, which he selects for its beauty, but also for its role in the piece itself. 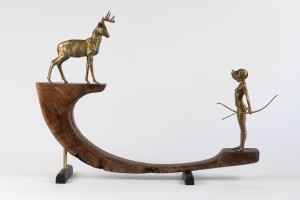 “The Huntress,” made of bronze, maple and wenge, began as a commissioned piece. A woman with bow and arrow regards a white-tailed, deer with reverence. | Photography by Jessica Hart

Consider his piece “Continuance of Action.” Seen from across a room, it’s instantly recognizable, from the slope of the neck to the tension of the legs: a horse dragging a weight. Look closer, though. The horse drags the stone through the walnut base of the piece itself. 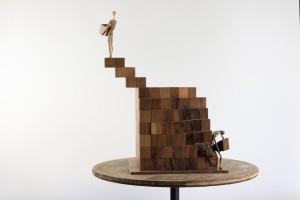 “Thought Is Action” evokes the struggle to overcome personal obstacles. “We all have burdens. We choose how to carry them, how to wear them,” says Johnson. “I wanted this to be a reminder that the burden can give you a mindset you can build with.” | Photography by Jessica Hart

Another perfect example is a piece still in development: “Old Man and the Sea.” Inspired by Ernest Hemingway’s book, fisherman and marlin circle each other atop and through a maple base that is both an ocean’s waves and a book’s pages. There’s a mutual respect between fish and fisherman, despite their opposition. The waves roil above and, below, the light plays in the ocean’s depths. Even as a mockup, there’s an equilibrium of medium and form. Every element is essential. The result is layers of meaning, inviting the viewer to interpret on their own terms. “My work is meant for people,” says Johnson. “I want to translate something that’s meaningful for me, so that it can become theirs.”

In March of 2022, Tyrel Johnson took home the Best of Show in the “3 Dimensional” category at the Great Falls Out West Art Show & Sale.