A family builds a modern farmhouse in Bozeman with Scandinavian influence

When Laef and Anne Olson moved to Bozeman, Montana, in 2006 they dreamed of living on a farm, but with four young children they realized they needed neighbors. Once established in the community, though, they bought a 147-acre parcel surrounded by farmland and built a barn and pond.

They’d seen a home designed by Greg Dennee of Locati Architects that was different from the heavy mountain style favored in the area; they felt he could interpret their vision of a modern farmhouse with Scandinavian influence. “They came to me with a pretty different request from what most people are looking for,” Dennee recalls. “They liked the spare and minimal look, the efficiency and the simplicity of materials Scandinavian homes reflect.” 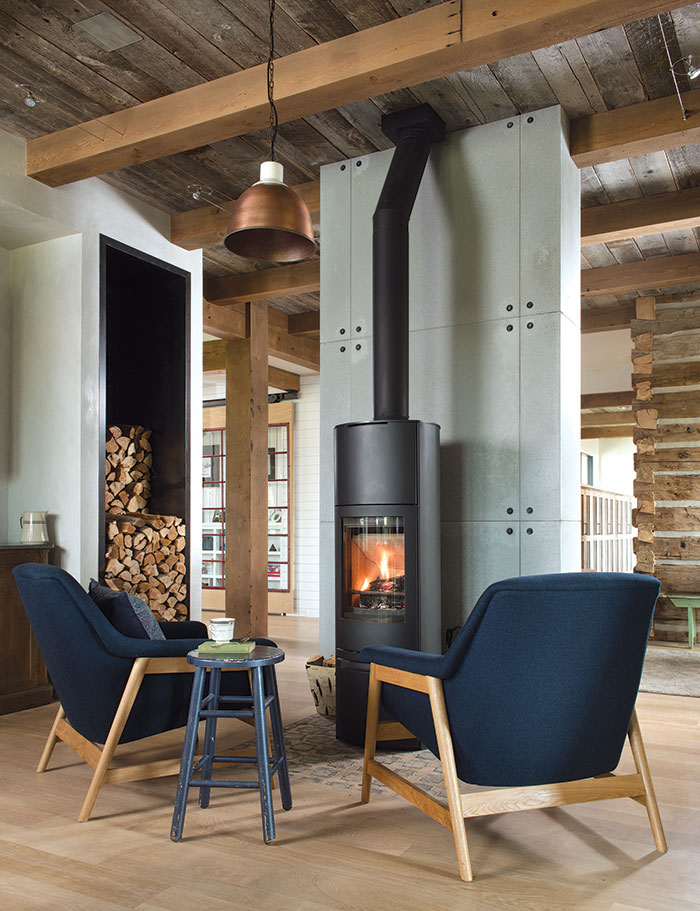 The heart of the kitchen is its high-efficiency Jydepejsen stove. Cast concrete panels absorb heat and radiate it back into the room.

The Olsons knew they wanted a comfortable house that would draw them together as a family and liked Dennee’s concept: a home that appears to have been constructed over time in its combination of clapboard, log and stone structures with more modern “additions” and with a weathered red barn as the garage. They dispensed with the media room and overlarge bedrooms but retained the mudroom, guest suite, offices, rec room and music room. They were deliberate in deciding that their children would share bedrooms rather than each having their own (both kids’ rooms have lofted spaces for privacy). 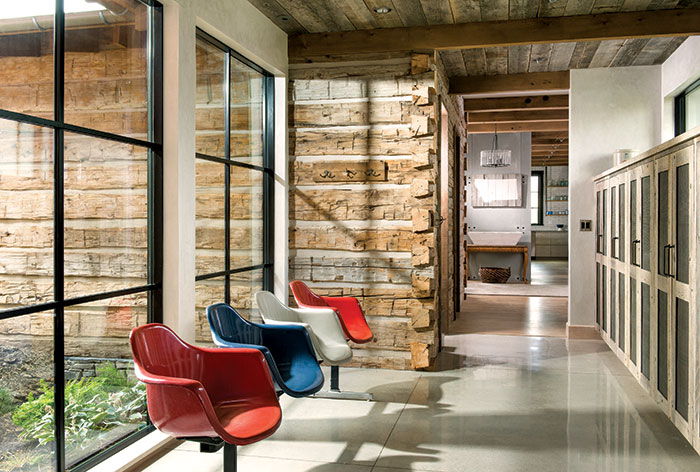 Homeowners Laef and Anne Olson did their own interiors with support from Locati Architects and North Fork Builders. Found items include seats in the mudroom reclaimed from Bozeman’s Greyhound bus terminal.

By the time the project kicked off, Anne had done so much research she was able to act as the interior designer. This made for a true collaboration as Dennee’s team at Locati Architects and Jon Evans of North Fork Builders talked her through specifics of the process and she and Laef outlined furniture sizes with tape to determine the scale.

Anne knew she wanted to incorporate antiques and found objects in the décor and spent countless hours on websites like eBay and Chairish. “By the time we sat down with Greg, I really knew what we wanted,” she says. “I’d come to meetings loaded with pictures, scans and a design book. Greg would ask, ‘Trim?’ I’d say, ‘Black.’ I knew we wanted shiplap here, concrete there. We were super decisive.” 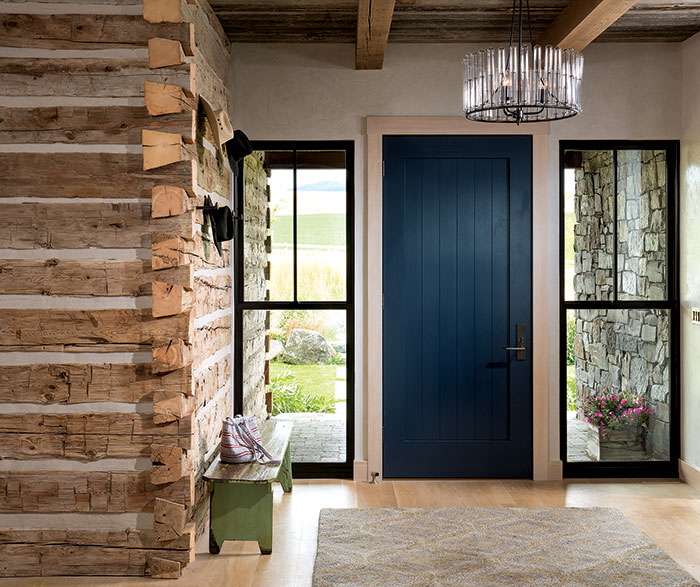 Touches of Norwegian blue and dovetail log corners are found throughout the house.

“Anne worked visually; I worked analytically,” Laef adds. “I think we complemented each other, both in our approach to construction but also by sharing the research workload. I tended to focus on the smart-home technology, wood-burning stoves, HVAC (ground source heat, and the house is pre-wired for solar) and other technical aspects. Anne focused on design.” 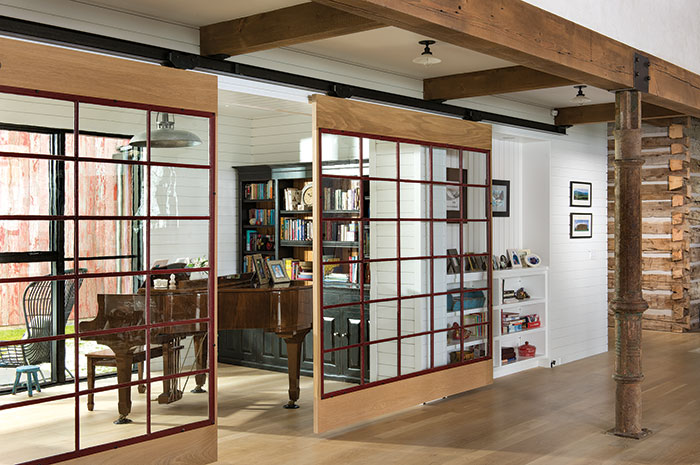 The sliding doors to the music room came from Montana State University’s science building, the iron posts from a gas station in Illinois. 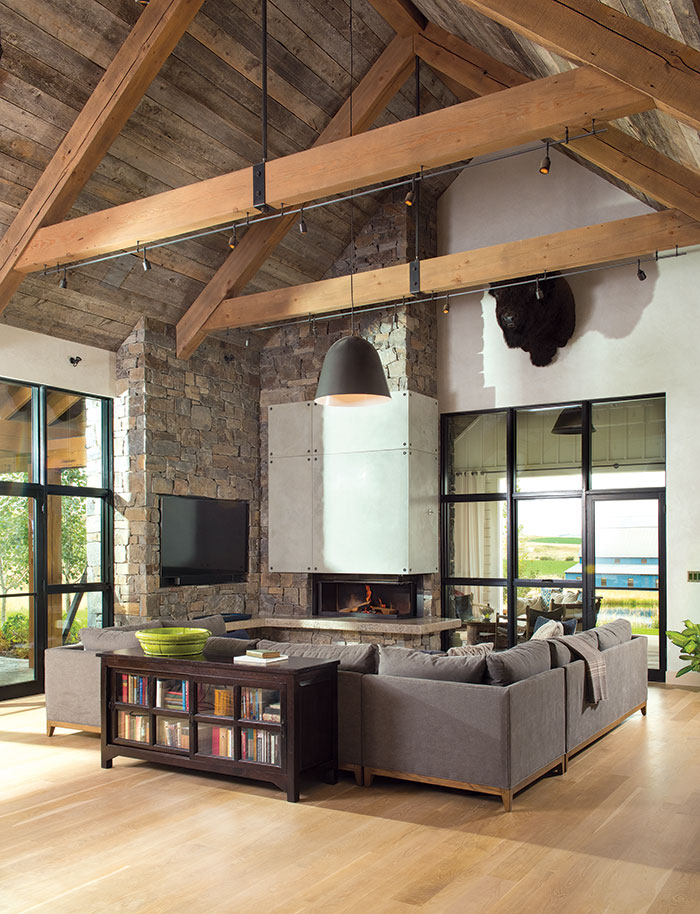 The German Brunner fireplace was placed in the corner to maximize views in two directions. Wood and timbers from Montana Reclaimed Lumber.

They introduced spontaneity and creative whimsy through the pieces Anne sourced; Dennee says he and Evans enjoyed the element of surprise. “She would find architectural salvage items, then we’d figure out a way to incorporate them.” These include fiberglass chairs from Bozeman’s Greyhound bus station, windows from Montana State University’s science building and iron posts from the Olsons’ home state of Illinois. White oak timbers from the family’s 1880s Minnesota homestead barn were incorporated in the master bedroom, in the kitchen and as window lintels in the stone building. The log cabin was found in Wyoming. 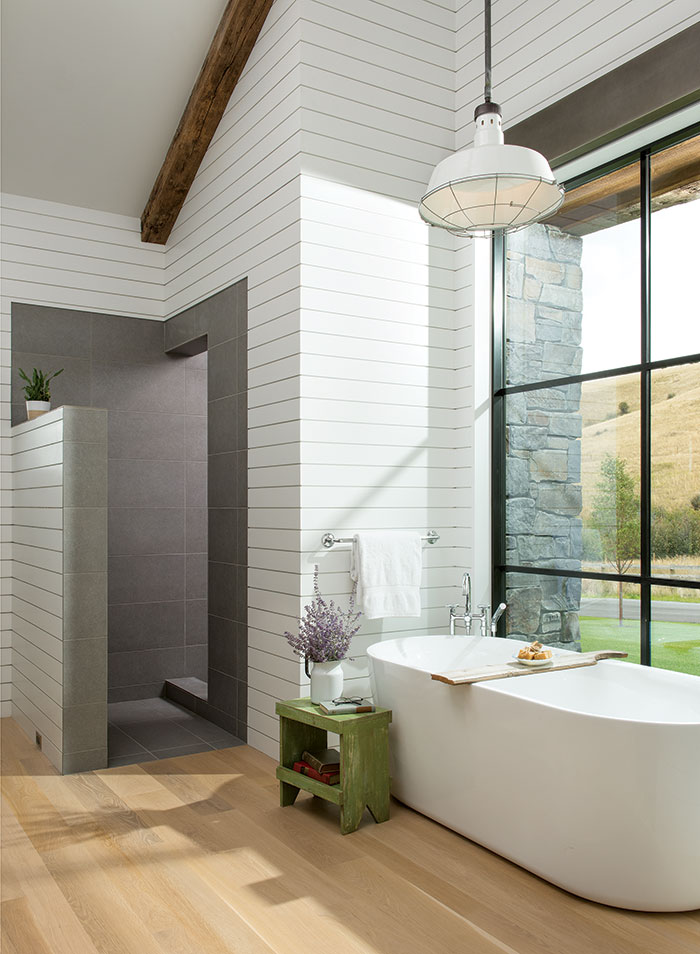 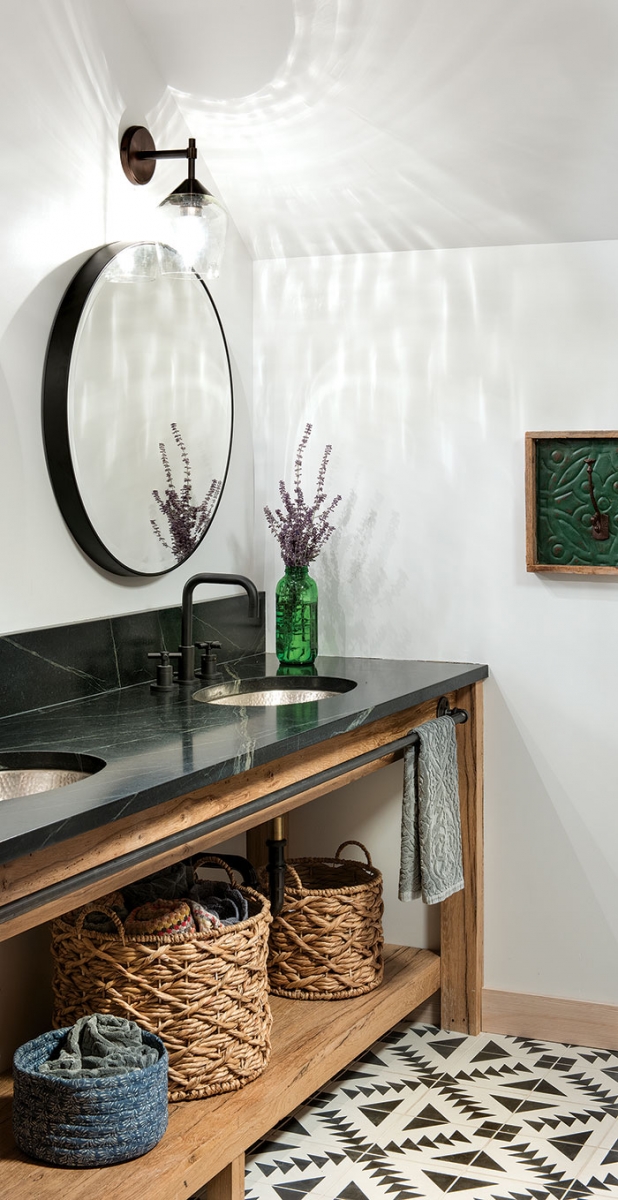 Bathrooms are characterized by openness and simplicity.

The layout is open, although the kitchen occupies its own defined space. The design includes elements both traditional (resawn reclaimed beams and posts, corral board ceilings) and modern (concrete flooring, concrete panels behind the wood stove and in the fireplace, cable and rail lighting and modern-profile windows). White waxed plaster walls, modest trim and white oak flooring create a neutral canvas and a clean, bright look even on dark winter days. 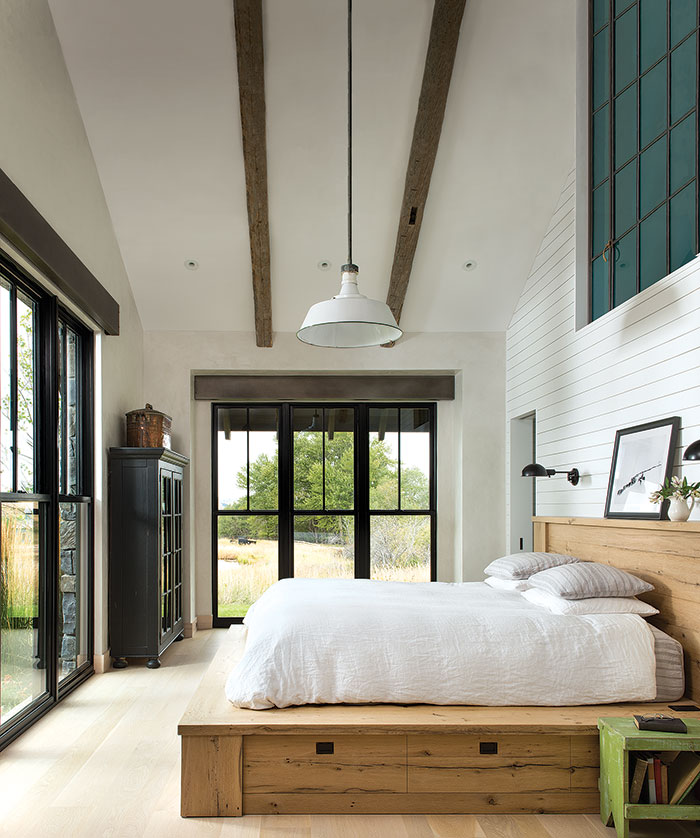 The platform bed was made by Josh Vinson of Vinson Custom Woodworks; the timbers are from the family’s Midwestern homestead barn.

Reflecting on their decision to not only build but do their own interiors, Anne admits, “I must confess, I never wanted to build a house, and the thought of picking out every faucet and light fixture was overwhelming to me. But, being on the other side of it, we couldn’t be happier with our home.” 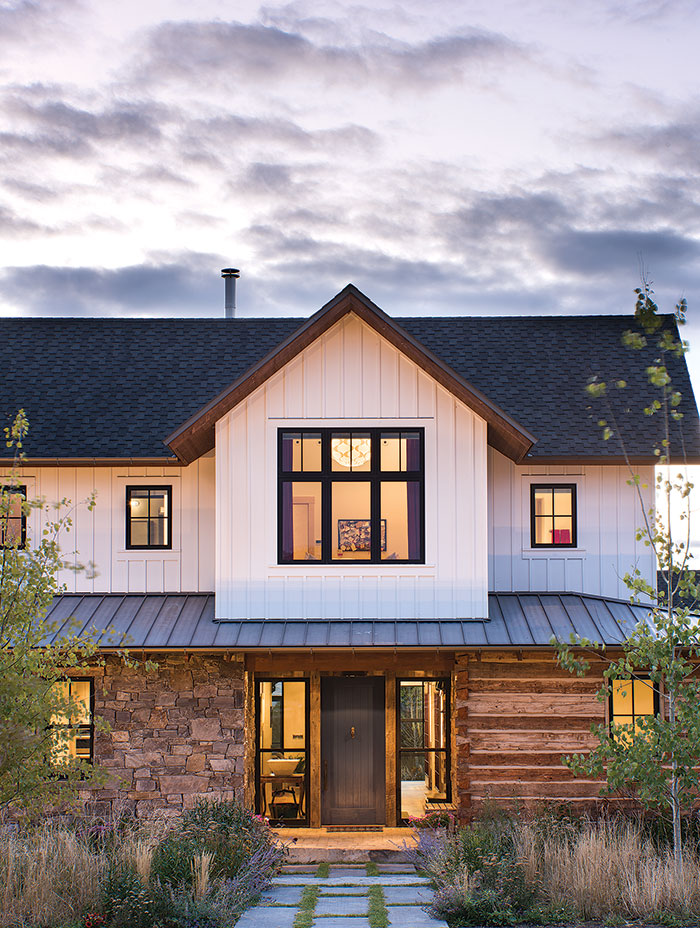 The house was designed to look as though different sections were added over time.

WOODSTOVE OR FIREPLACE?
The fireplace-vs.-stove decision is influenced by aesthetic considerations as well as the more obvious efficiency goals. For the Olsons, the Scandinavian influence seen throughout the house pushed them toward woodstoves, which provide efficient heating  as well as a clean modern look to match the house.
CONCRETE PANELS which absorb then radiate heat, can be purchased, but the Olsons had theirs made by a local craftsman. The panels, which were cast and then attached to a wood frame, give the kitchen a modern look. SOAPSTONE HEATSINKS built into the unit allow the stove to continue to radiate heat even after the fire has gone out. THE COSMO 1500 from Jydepejsen is “super efficient and cranks out the heat,” says Laef Olson, who extensively researched the topic. “Even with a relatively small firebox it has a long burn time.”