Pristine and Rustic in Idaho

After years of vacationing in the area, an Oregon couple purchases a pristine Idaho property and a deconstructed Hudson Valley barn to go with it 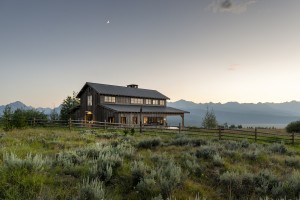 Originally built in New York’s Hudson Valley before being deconstructed, the former Dutch barn has been reimagined by Miller Roodell Architects as a rustic abode with modern amenities. | Photography by Lucy Call

Idaho equals relaxation and recreation for an Oregon couple, who spent summers there with their sons to visit family and enjoy outdoor activities such as hiking, mountain biking and skiing. During a hike in the mountains of Central Idaho one summer, they had an epiphany: The time was right to plant their own flag there. “We realized that we should do this, and I’m so thankful that we did,” the wife says. “Everything came together.” It wasn’t long before they heard about a property overlooking a serene river, with mountains in every direction. They bought the site, residing in a 600-square-foot A-frame on the land while they contemplated the sort of home they wanted to build. After much research, they purchased a Dutch barn that had originally stood in New York’s Hudson Valley, soon commissioning Miller Roodell Architects and Sawtooth Valley Builders to reimagine it for its spectacular new locale. “We didn’t want a new house, so we created a set of principles with our team to stay as authentic as possible,” the husband says. 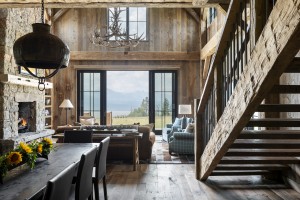 An elk antler chandelier by Fish Fisher from Fish’s Antler Art makes the most of the lofty ceilings in the inviting living room, where comfortable furnishings from RH and Calico Corners surround a massive stone fireplace. Just outside, one of the home’s many outdoor areas offers a spot to enjoy the mountain views.

Built with mortise-and-tenon joinery, the structure boasted an open first floor once used for livestock and a loft area where hay was stored. To accommodate the conservation easement on the property, the new owners had the timbers cut and lowered the roof on two sides, minimizing its visual impact on the land. And to handle the area’s heavy snowfalls, some of the timbers have been hollowed out to conceal a steel skeleton. “It was a unique opportunity to build around this piece of history,” explains architect Matt Miller. 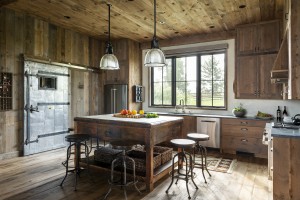 Just two of the many unique pieces the owners hunted down during the project, both the kitchen island from Rejuvenation and the fire door from Good Olde Things were salvaged from the Hamilton Manufacturing Company in Two Rivers, Wisconsin.

The area’s prodigious snows proved challenging for builder Keith Reese, who often employed snowmobiles and snowcats to reach the site. The result, however, was worth the effort. “The people that put it together for the first time did a good job, and I hope we did them justice when we put it back together,” he says. “It’s a bit of authentic American history that kind of bridges the gap between east and west.” 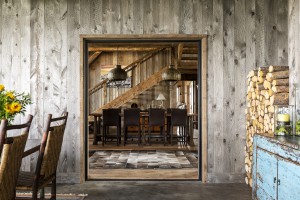 Counter-height barstools from Crate & Barrel pair elegantly with a WWII aircraft factory workbench with a half-metal, half-wooden top in the dining room. In the same spirit, the 19th-century pendants were formerly grain storage vessels from India.

It also links the past and present. While the barn is eminently rustic, for example, the architects incorporated a new stairway with a modern steel railing. And to humanize the space, they lowered the ceiling in the kitchen, where plaster walls play off the rustic wood boards. With little space for often unused bedrooms, the architects opted for two bedrooms on the main level supplemented by built-in bunks in the loft. Sliding panels allow them to be closed off when not in use. 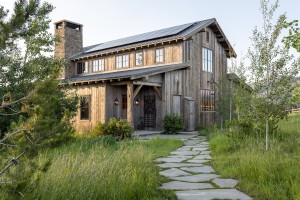 Perhaps most strikingly, they designed a two-story fireplace that tapers toward the ceiling using locally harvested field-stones. “They were excited to have this powerful element in the room,” says architect Chris Clay. “It’s a very traditional look for this kind of architecture.” 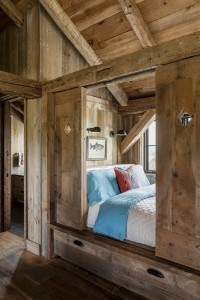 Located alongside a lounge in the loft, the built-in bunks offer spectacular views for visitors.

Every decision was vetted by the owners, who regularly led meetings during the nearly two-year project. In addition, the couple spearheaded the interior design, searching the internet day and night for rarified pieces that would complement the barn. Among their finds is an industrial half-metal, half-wooden table originally used to build aircraft during World War II. Illuminated by a pair of Indian grain bins-turned-pendants, it makes a wonderfully intimate dining table. 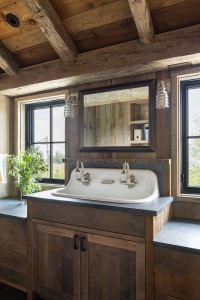 Rustic yet modern, the loft bathroom features lighting by Visual Comfort from Circa, soapstone countertops from Crocodile Rocks Inc. and a farmhouse sink by Kohler from Ferguson Enterprises.

Boasting a mix of indoor and outdoor spaces, both covered and uncovered, the result lives up to their expectations and then some. It proved to be a magical setting for their oldest son’s nuptials, which included the wedding itself and a series of dinners. And while the house is perfect for just the two of them, they love that their adult children and family friends seem so drawn to the place. “It’s become more of a family headquarters than we ever imagined,” the wife says. “It works just beautifully.” 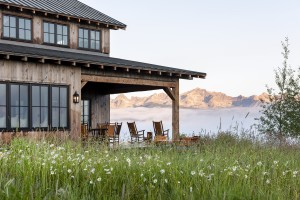 A covered porch with marvelous vistas is one of the many outdoor areas that Miller Roodell Architects created for the converted barn.

To furnish their reconstructed Dutch barn-turned-mountain retreat, the owners eschewed traditional furniture stores, instead scouring the internet for the sort of rarified pieces with the kind of soul the structure merited.

Converted into pendants, for example, a pair of Indian grain bins illuminate a narrow counter-height workbench from a World War II aircraft factory in Long Island, New York. “It creates an intimate dining situation where people are a little bit closer together,” the husband explains. And the weighty, patinated marble-topped island (a great find that sold for about $60 in 1930) served as a printing table in its first incarnation. “You could never duplicate it with new,” the husband says. It was kismet or “dumb luck,” as the husband put it, when they discovered the old fire door that they purchased from a separate vendor in New York City, from the same factory where the printer’s table was made. Often shipped by smaller outfits, one piece arrived in the middle of the night; another via a horse trailer in a snowstorm. But the owners say there’s nothing like living with such pieces. “We started getting into the history of these pieces, and it was fascinating,” the wife says. “That made it deeply personal.”