Off-Site Construction: Method of the Future?

Could off-site construction be the answer to some of the biggest hurdles in home building in the mountains?

By "off-site construction" we're talking about when a building is constructed at a controlled indoor facility, using the same materials and designed to the same codes and standards as conventional construction, then transported to the home site, set on a foundation, and finished.

A recent Wall Street Journal story explained the process is quicker than on-site construction, because companies can work through inclement weather and bring more order to a job site.

The article also noted that some estimate off-site construction can help reduce the cost of construction by 20 percent or more.

Much of the early interest in these system-built modules has been in urban environments but the challenges of site disturbance, construction traffic, weather and on-site storing of weather-sensitive construction materials also apply strongly to construction in the mountains. 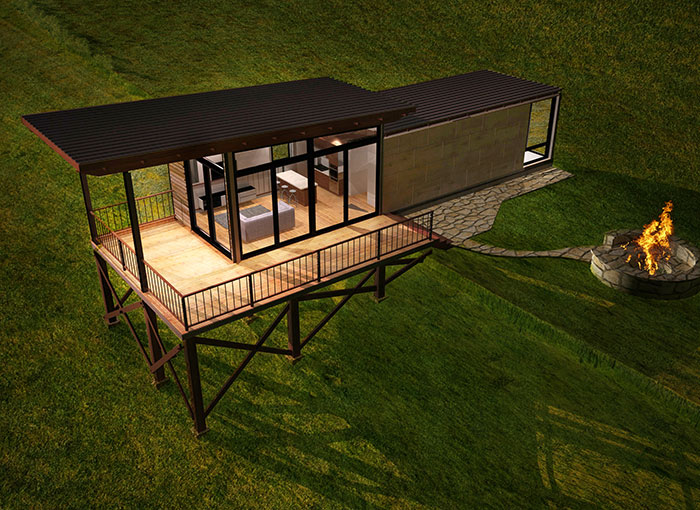 A Wheelhaus Lookout module customized for a sloped site.

“Building outside in Jackson Hole is seasonal at best, so finding a dry and covered space was a must," Mackay explains. "When customers started asking for our tiny house cabins to be attached together to make a duplex or a larger cabin with multiple bedrooms, the transition into designing and building modular homes was seamless.”

To meet demand, Wheelhaus added a collection of modular homes to its popular line of tiny house cabins. Rooted in a sustainable, built-to-last mentality, this modular collection offers the striking architecture and space efficiency for which Wheelhaus is known. Current models range from 400 square feet to 3,000 square feet and can be customized. Most are designed with sizable decks, too, so there is a good flow from inside to outside living space that increases the square footage and overall feel of the home. 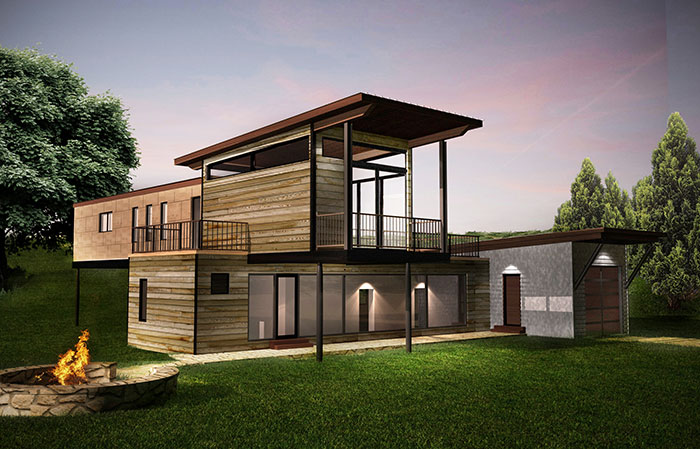 Wheelhaus Stack-Haus consisting of the company’s Lookout module above a Light Haus with an added garage.

Wheelhaus shows eight different modular designs on its website, but Mackay explains that any parts of their house designs can be used as components in a new modular home.

Developers have been quick to see the advantages of off-site construction. Wheelhaus is in the process of building 120 cabins to be used as vacation rentals at a resort in Montana and recently submitted proposals for new master-planned communities in Colorado and Utah.

“The Colorado project is really exciting”, Mackay says, “with 500 units ranging from 600-square-foot cabins to 2,000-square-foot homes—all to be built in a dry and controlled environment and transported to the site for set and finish.” 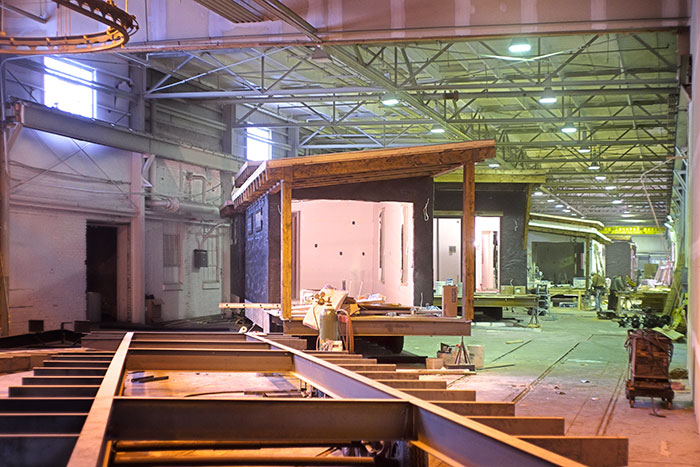 Off-site building especially makes sense in a rural environment. An off-site construction company has the warehouse space and qualified employees to work year-round, as opposed to a new development that can struggle to find enough local builders or a company to temporarily staff a project. Mackay adds, "With Wheelhaus, we can keep skilled workers busy and close to home, year-round.”

Interestingly, system-built buildings are generally stronger than conventional construction, too, because each module is engineered to independently withstand the rigors of transportation.

"What Henry Ford figured out over 100 years ago, the modular home construction industry is now catching up to," Mackay says. 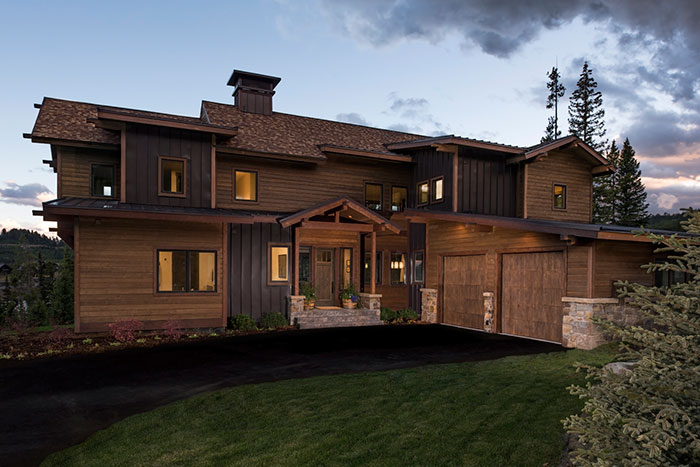 Size is not limited with off-site construction. Homes available at the Highlands in Spanish Peaks Mountain Club range from three-to six-bedrooms and 2,700 – 4,600 square feet.

A good example of the luxurious, high-end capabilities can be found in the new Highlands neighborhood at Spanish Peaks Mountain Club in Big Sky, Montana. Highlands offers several customizable models of homes that are built off-site and assembled on-site.

Homes available at the Highlands in Spanish Peaks range in size from three to six bedrooms and 2,700 to 4,600 square feet. 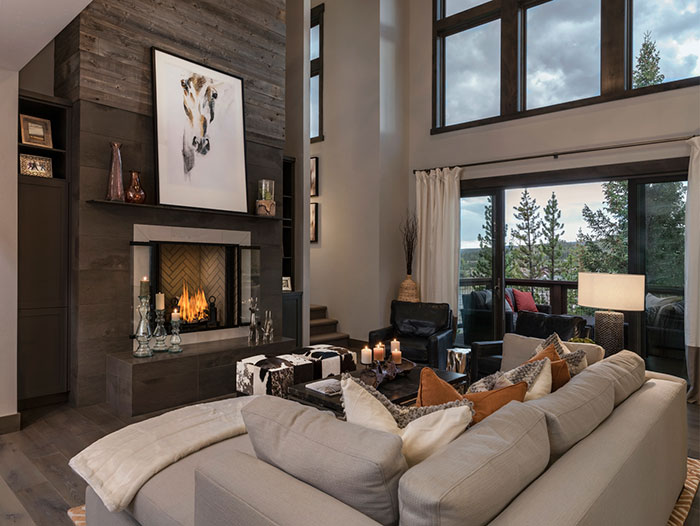 The interior of a home in the Highlands neighborhood at Spanish Peaks Mountain Club in Big Sky, Montana, shows there are no compromises to quality in off-site construction.

“And we are not making any compromises on quality here," says Alex Iskenderian of Lone Mountain Land Company, the owner of Spanish Peaks Mountain Club. “These new homes in Highlands are built to the highest standards with top-of-the-line finishes." 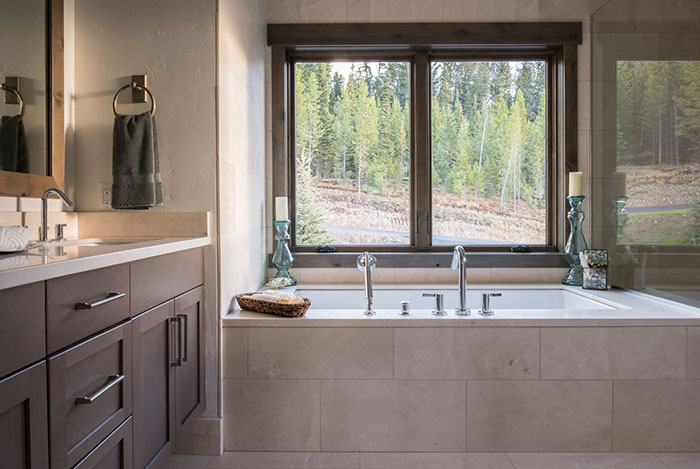 The modules arrive on-site with sinks and tubs and fixtures already installed.

Iskenderian continues, "Off-site construction is not the answer for all of our projects, but it offers a lot of advantages at Highlands—less construction traffic and thus less disruption to current residents, and it reduces weather-caused delays or slow-downs in the winter months."