Jackson, Wyoming, once might have been described as a “sleepy little town” during fall and spring. In summer, millions of tourists pass through on their way to Yellowstone; in winter, skiers trek to town, eager to point their boards down Jackson Hole’s steep and deep slopes. But during mud season, as spring and fall were called, downtown became a veritable ghost town, the buckboard sidewalks metaphorically rolled up and many businesses closed for an extended vacation. Then a group of art gallery owners changed all that.

In 1984, local gallery owners with hoteliers and the Chamber of Commerce created a weekend arts festival to attract visitors during September, arguably one of the area’s most beautiful months. The Jackson Hole Fall Arts Festival was born—and has grown from two days to 12, encompassing more than 50 events. 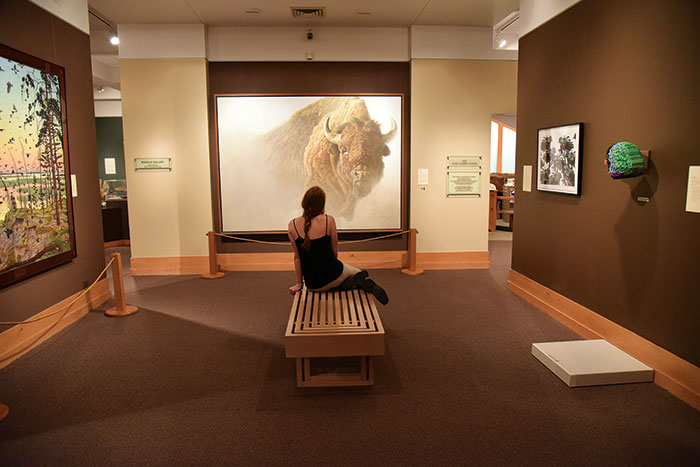 Taking their cue from the Jackson Hole Fall Arts Festival success, arts organizations expanded their offerings. The National Museum of Wildlife Art opened its new building atop a butte overlooking the National Elk Refuge in 1987 and became a cornerstone of Jackson’s art community. The museum includes the largest collection of Carl Rungius’ work in the U.S. and is a regular stop for such acclaimed traveling exhibitions as the upcoming Andy Warhol: Endangered Species. 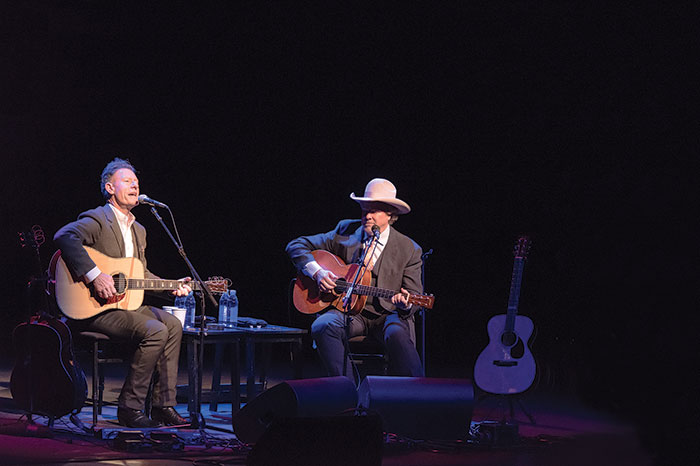 The 525-seat theater at Jackson Hole Center for the Arts provides an intimate setting for big-name acts like Lyle Lovett, pictured here with Robert Earl Keen, playing to sold-out audiences—in addition to locals these performances attract people traveling from outside the Jackson area to take in a show. [Photo courtesy JH Center for the Arts]

In 2007, the creation of the $18 million Jackson Hole Center for the Arts (“The Center”) with its 15 studios, three classrooms, two galleries, five outdoor public spaces, two lobbies and a 525-seat theater put Jackson in the major leagues when it came to attracting name performers. Willie? Lyle? Yep, they’ve played here. 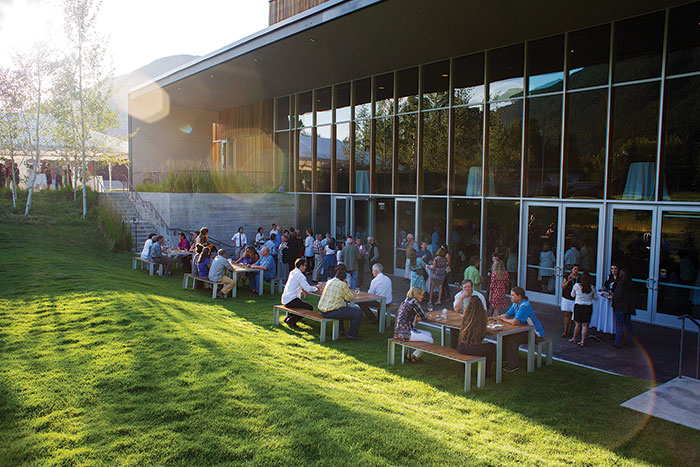 The Center offers five outdoor public spaces, including picnic tables outside the lobby on a grassy field where picnickers can enjoy views of Snow King Mountain (seen reflected in the windows). [Photo courtesy JH Center for the Arts]

Dancers’ Workshop, a nationally recognized dance company that makes its home at The Center, offers classes from hip hop to ballet as well as hosting top companies from the New York City Ballet to dance theater performances by Diavolo: Architecture in Motion. 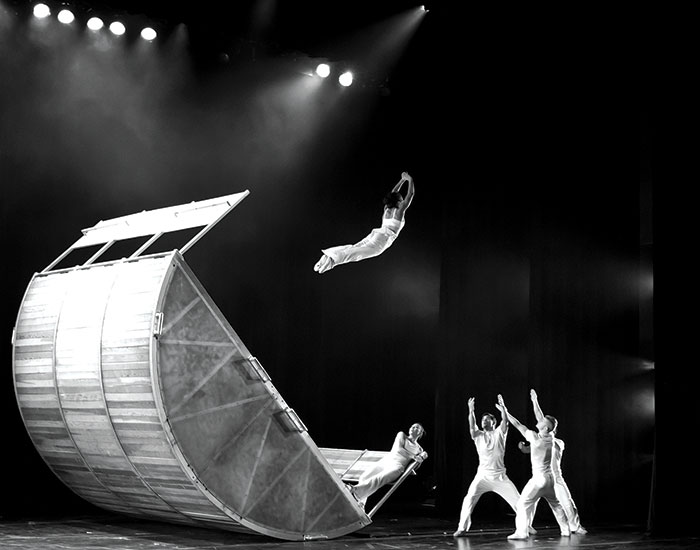 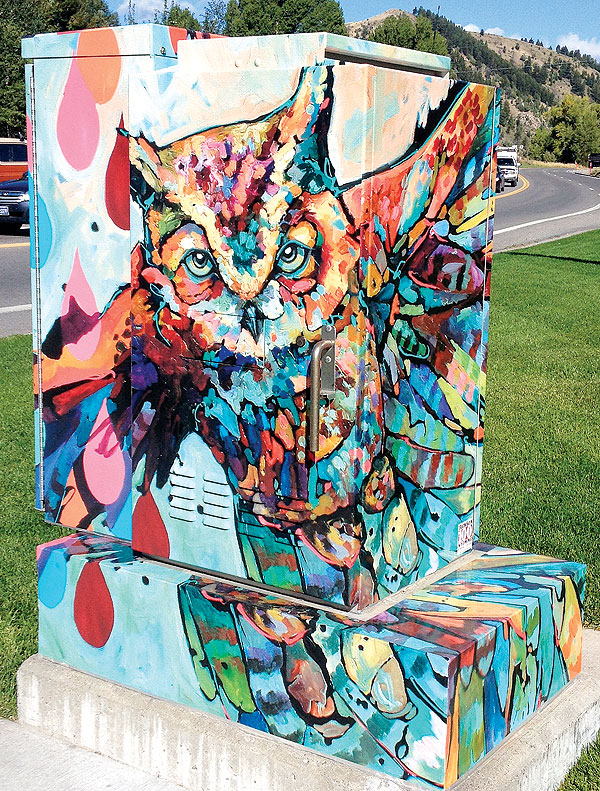 Jackson’s vibrant gallery scene offers something for everyone, from traditional Western and wildlife art to contemporary work. Boasting more than 30 galleries, it is said that Jackson Hole has more art dealers per capita than the Big Apple. 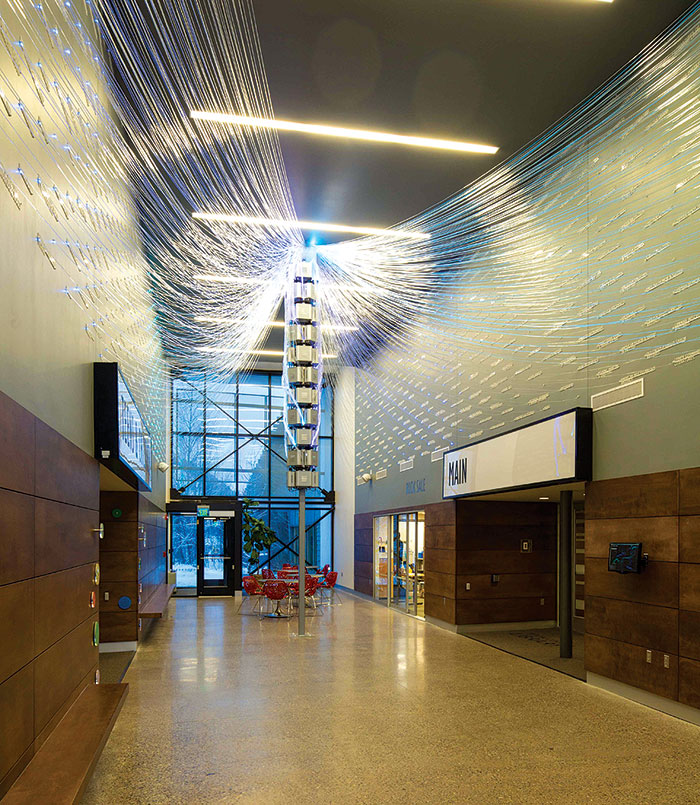 A view of an installation by Jackson Hole Public Art in the Teton County Library. [Photo courtesy JH Public Art] 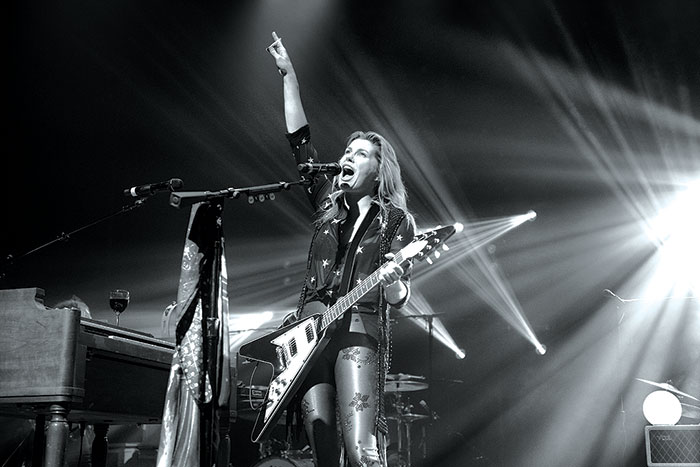 When Outside magazine ranked Jackson number two in its Best Places to Live in 2016, it gave the thriving local arts scene a special mention. “Jackson is a top-choice cultural destination to rival any across the U.S.,” agrees The Center’s Ponteir Sackrey, “even in the so-called off season.” 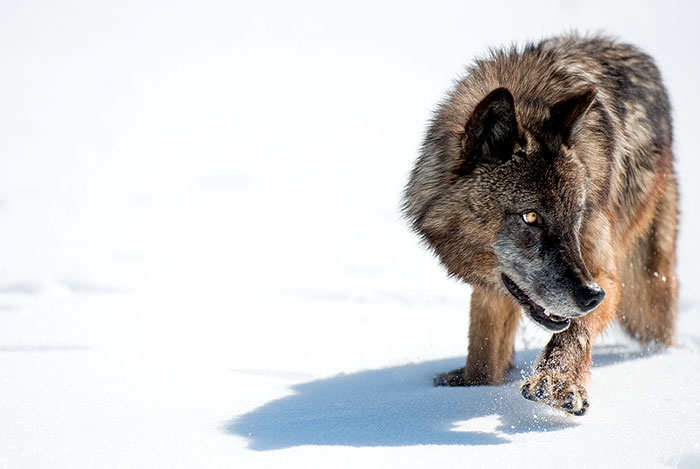 THE SCOOP
March – May in Jackson

The Name: The town is Jackson; the area is Jackson Hole and includes Wilson, Teton Village, Moran Junction, Hoback and Alta, as well as Victor and Driggs, Idaho.

The Scene: Walk from gallery to gallery downtown, but drive, bus—or  bike, weather permitting—to the National Museum of Wildlife Art.

Weather: Unpredictable – from warm and sunny to snowstorms.

Best Bakery: Persephone—bringing a touch of Paris to the Wild West.