Of Fishing, Furniture and Fate

At its core, this is a love story about fishing.

Southerners Alex and Anne Bernhardt—of the eponymous furniture company—are avid anglers who discovered the wonders of Montana’s Ruby Valley more than 30 years ago. “I’ll tell you how much we love that place,” Anne says. “We named our home in North Carolina ‘Montana.’”

So one summer not long ago, the couple checked into the Ruby Springs Lodge in Alder, Montana (population: 112, at last count), a fly-fisher’s haven and familiar spot to the Bernhardts. This time, they discovered in their cottage a brochure advertising the sale of acreage adjacent to the lodge’s property. “I tossed the leaflet to my husband and said, ‘Let’s buy this,’” Anne laughs. “Twenty-four hours later, we did!”

For decades the couple had dreamed of acquiring a place in the valley, but on this particular trip, they had a distinct advantage: their friend Michael Vanderbyl, a designer whose San Francisco-based firm specializes in branding, product design and interior architecture, happened to be with them. After the couple purchased the property, Vanderbyl—who, coincidentally, had recently designed his own vacation home—drove to the site and walked it with Anne and Alex, helping them decide where to position the home so it made the most of a large pond and the rivers that crisscross the land.

Then serendipity struck: Vanderbyl locked his keys in his rental car. And what does a designer do while he waits for a locksmith? He sketches a house, of course. That very afternoon, Vanderbyl laid down the preliminary plans for his friends’ home. “The most important thing to us was that it wasn’t intrusive in the landscape,” Anne recalls. “We didn’t want some sort of statement home.” Vanderbyl (with help from the project’s Montana-based architect of record Ed Ugorowski) delivered a design that relies heavily on symmetry—he confesses a kind of Palladian affection for equilibrium—and on the lodge-style architecture that is a hallmark of traditional Montana homes.

Though the exterior nods to the local design vernacular, Anne didn’t want the typical Western style: “I’m a minimalist,” she says. “I don’t like stuff.” Designer Susie Hoffmann, of Bozeman-based Envi Interior Design Studio, remembers this disclaimer as Anne’s opening statement in their first discussion. “So we really tried to keep everything as pure as possible,” Hoffmann says.

The home’s wood finishes were crucial to the project’s success: Hoffmann painstakingly tweaked them until they became an ideal backdrop for the sleek and graceful furnishings Hoffmann and Anne selected from Bernhardt’s extensive lines. “The best part was that we could customize everything—finishes, fabrics—so we got exactly what we wanted,” Hoffmann says. The designer then punctuated the muted palette and modern lines with a few colorful pieces and accessories, most notably the great room’s splashes of red.

The upshot of all these meticulous choices is a home with plenty to love, so it’s no wonder there’s no consensus on the very best part. Maybe it’s the matching alcoves off the great room; one an office and the other a bar and music room, where instruments hang as functional art. (The Bernhardts’ love of fishing is rivaled by their love of music.) Maybe it’s the fishing room, full of equipment and smelling of the river. Vanderbyl’s own choice hints at the irresistible pull of the Ruby Valley that drew the Bernhardts here in the first place: “There’s nothing more delightful than sitting on the screened porch after a day on the river and watching the evening come on,” the designer reflects. “It’s a little cold; you put on a sweater. Alex and Anne are having fun, playing their banjos. You’re taken to another place. 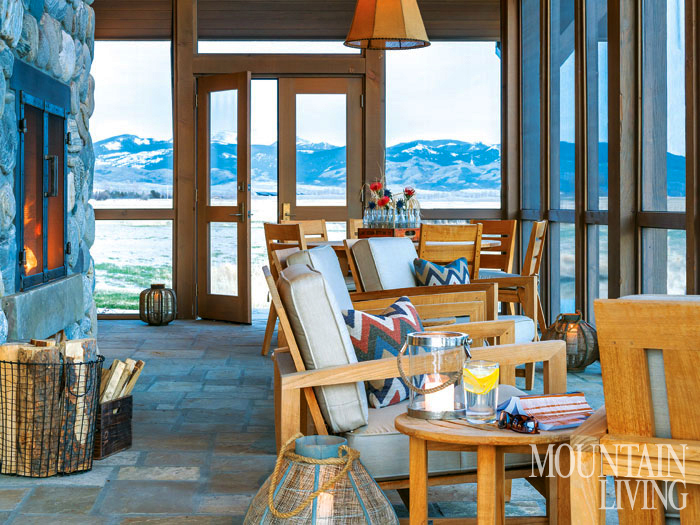 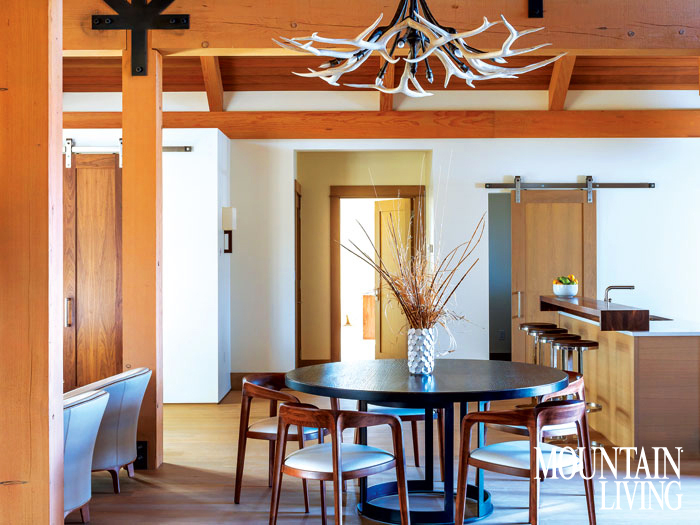 As a contemporary nod to the West—and traditional antler-themed decoration—local artist Ira Cuelho created this custom chandelier, which fills the dining room’s vaulted ceiling. Cuelho built the fixture by bleaching the antlers and then re-forming them into a 7-foot-tall sculpture. Below, the Elements table by Bernhardt and Corvo chairs by Bernhardt Design are a handsome counterpoint. 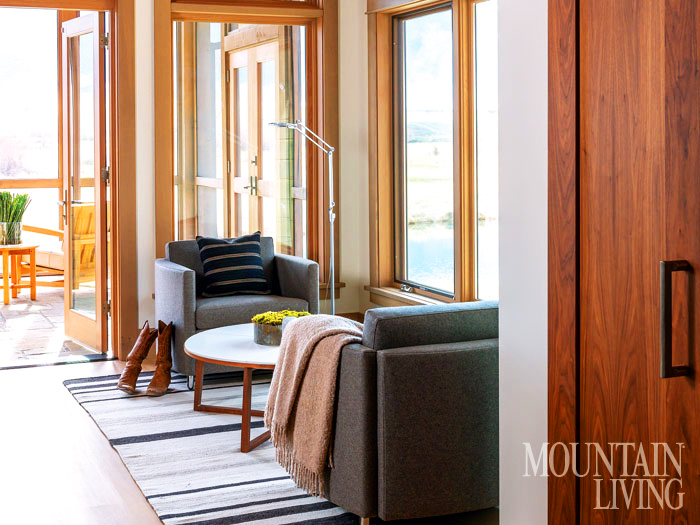 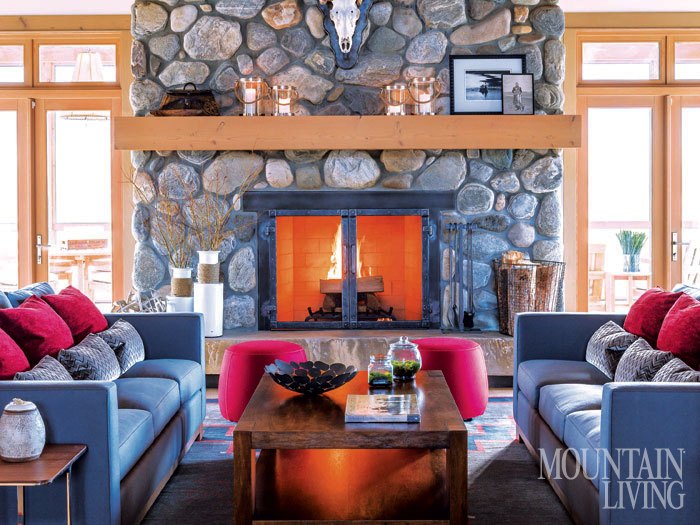 Despite the home’s minimalist leanings, the owners wanted a river-stone fireplace in honor of the rivers they love. Artist Ira Cuelho created the elk mount above the mantel. 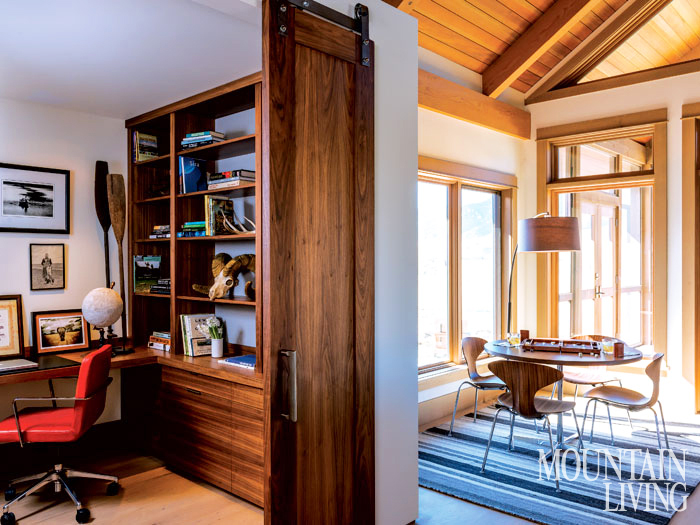 The game area in the great room plays in high style, thanks to Bernhardt Design’s Vue table and Orbit chairs. 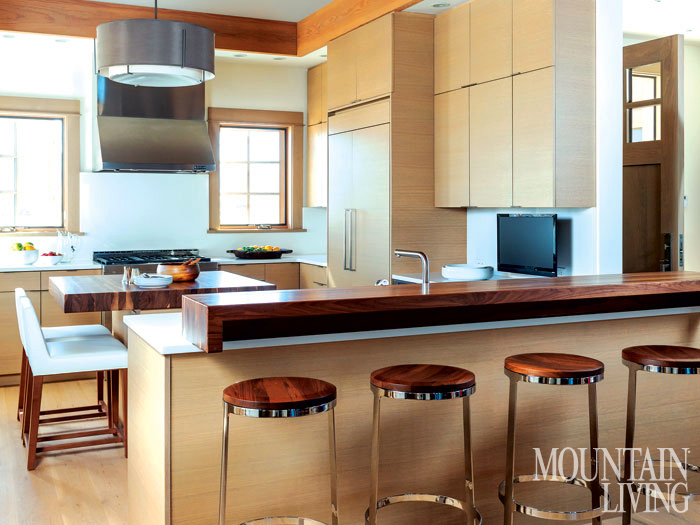 “I’m no cook,” laughs owner Anne Bernhardt, “but the kitchen is so beautiful, it makes me want to try.” Here, the home’s palette of walnut and white oak coordinates beautifully with the Aro barstools (at the bar) and Caron stools (at the island)—both from Bernhardt Design. 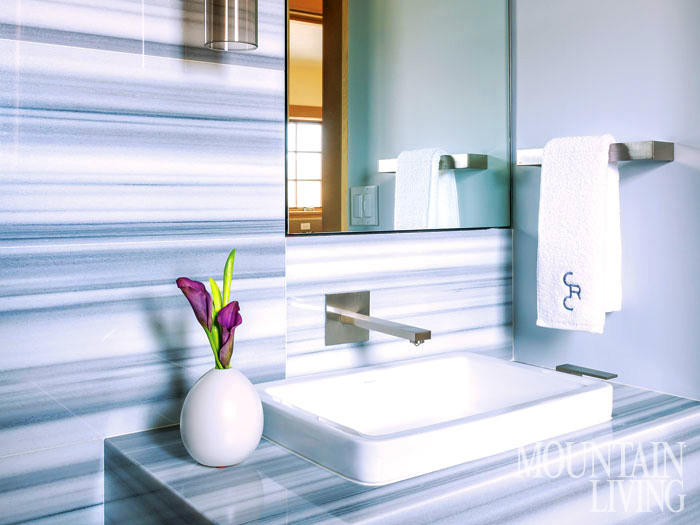 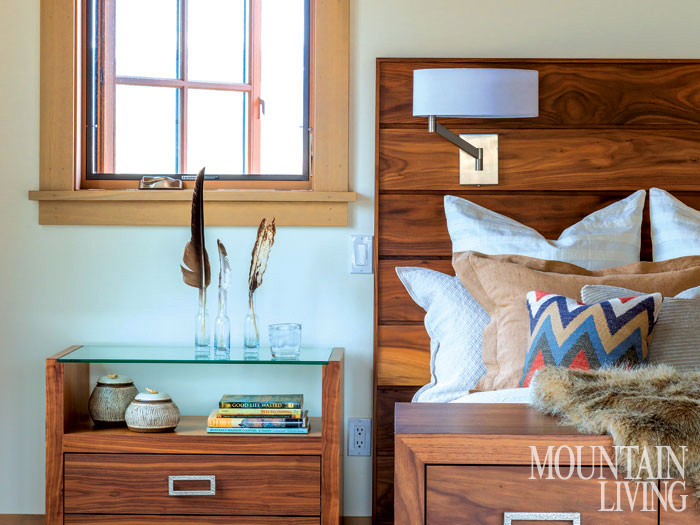 The custom headboard and footboard in the master suite coordinate seamlessly with smaller pieces from the Bernhardt line. The saddle-blanket-inspired rug and the simple jars of feathers are subtle hints of the home’s Western roots. 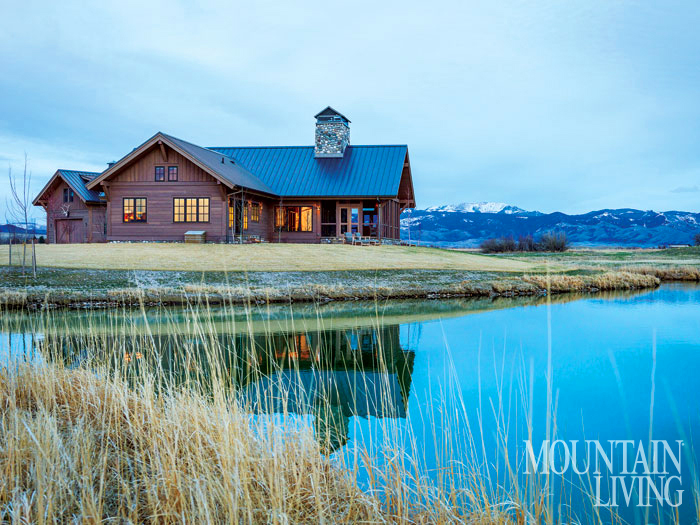 The Bernhardts’ vacation residence, dubbed “Clear Creek Ranch,” sits within a stone’s throw of Montana’s Clear Creek, home to a multitude of brown trout. The most important element of the home’s design is its low-key style, an homage to the surrounding landscape.