New Look on the Block

An eclectic neighborhood of older homes in Livingston, Montana, finds new expression in this contemporary abode 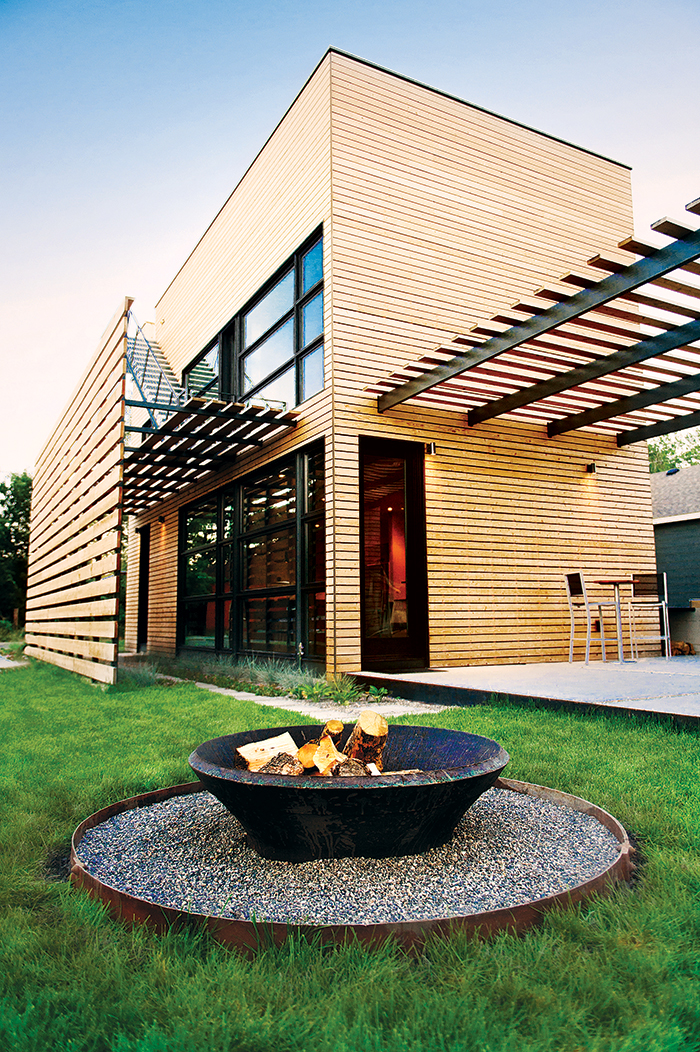 Peter and Michele Lami learned that it’s a very small world. The couple, who now live most of the year in Beaufort, South Carolina, were looking to spend the summer and fall seasons in Livingston, Montana. They searched the Internet for local architects to build their Montana home and discovered Brett Nave. When they contacted him, they were surprised to learn he actually lived near their previous home in Georgia, having recently relocated there from Livingston.

The Lamis are passionate fly-fishers (Peter is a lifetime member of the Fly Fishers International, a master certified fly casting instructor); their retirement would entail spending half the year in Montana. They knew from the start they wanted to live in town. “For us it was a no-brainer,” Peter recalls. “There were many reasons: We’re 52 miles from Yellowstone National Park, and the Yellowstone River flows through Paradise Valley to downtown Livingston. There are artists, writers, Hollywood people, fishermen and hunters. But most of all it was because I like the saloons.”

After searching for an existing house, the Lamis purchased a lot in an eclectic older neighborhood and set about finding their architect. They were struck by the work on Nave’s website—“He’s a brilliant architect”—and thrilled that when they made contact, Nave was actually on his way to Livingston. Once there, Peter says, “He got out his composition book and hand-sketched his ideas for a contemporary house on that lot. I asked him to send it and said, ‘Yeah, that’s it.’”

"We don't even know anyone who lives in a contemporary home." — Homeowner Peter Lam

The house is unusual for the neighborhood, not only in its modernist expression but in presenting an almost blank face to the street. It has only one small horizontal aperture in its sleek wooden facade but maintains an openness to the neighborhood by foregoing fences. “I didn’t want to keep people out,” Peter explains. “I wanted people to come in.”

The compact structure, with its floor-to-ceiling window wall on one side, feels expansive. The kitchen/dining/living area opens to an outdoor room protected by a steel trellis that connects to the secondary structure. This in turn presents an ingenious use of space: The garage, precisely measured to house a ClackaCraft drift boat and trailer throughout the winter, doubles as a guest bedroom (with bath) and party room (with kitchenette). Doors open on both ends, allowing for easy access, plenty of light and cooling breezes.

The home’s second story has two bedrooms and a shared bath. The clever use of the roof, with its exterior second-floor staircase to the deck, is transformative. Its above-treetops vantage point offers unimpeded views to the Absaroka and Crazy mountain ranges, as well as Fourth of July fireworks.

Nave was thrilled to collaborate on the project with Woodworks West builder and craftsman Will Lalich. A master cabinetmaker, Lalich has a commitment to quality and attention to detail that made all the difference in executing Nave’s vision. “It was a team effort,” says Nave. “Will is a builder and craftsman; he could never walk away from a mediocre job.”

Lalich employed different finishes throughout the house, from engineered hardwood flooring and walnut sliding barn doors to sleek tilework to high-sheen lacquered kitchen cabinetry. “From our standpoint, we really want to be able to control the finished product, the quality as well as the timing,” he explains. “A lot of time people overdo things that might look great immediately but don’t stand the test of time.”

At the end of a day of fishing, the Lamis return home to their ultimate retreat. Whether relaxing alone on the rooftop, hanging out with houseguests or hosting a large party under the trellis, the house works on every level. They credit Brett Nave with the vision and communication skills to ensure the success of the project (“He’s a very strong communicator; he understood what was important to us,” says Peter) and Lalich with the skills to execute it: “He built that house exactly the way it was supposed to be built, right down to the exact screws set down by the architect.” 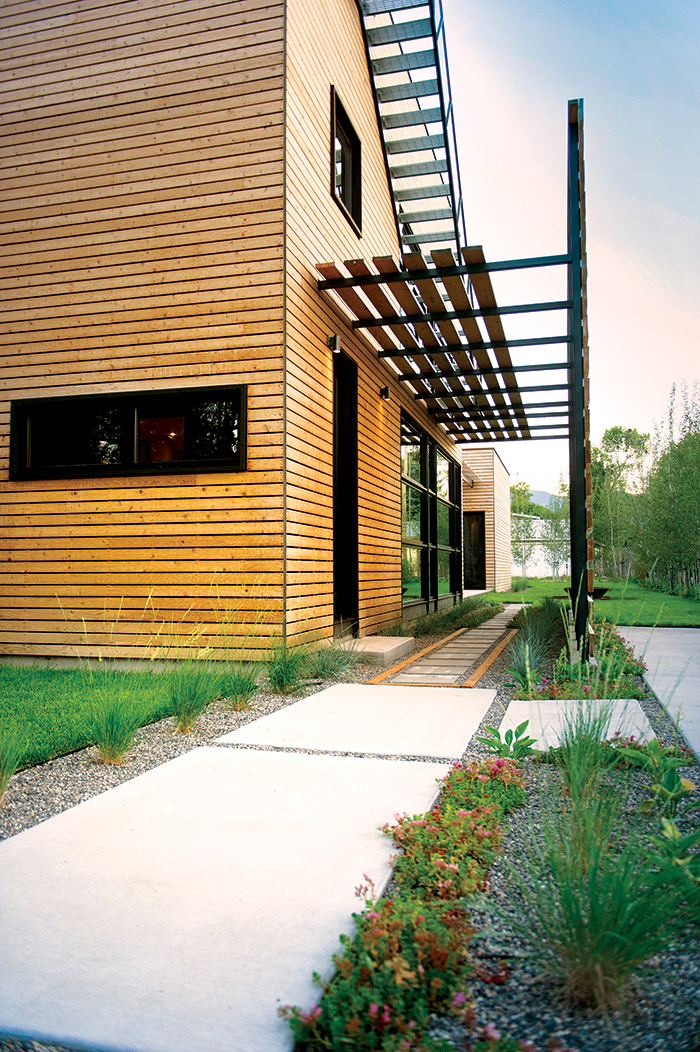 ​In place of a fence, a steel-and-wood slatted partition offers some shelter from the elements as well as privacy for those accessing the rooftop terrace via the outdoor staircase. 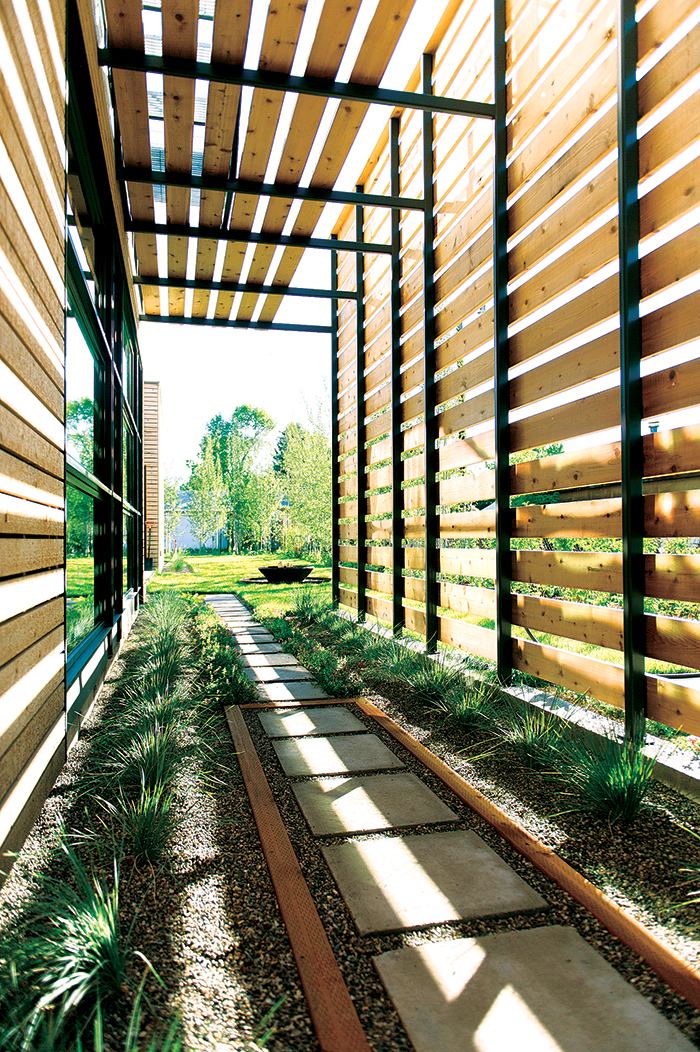 The two-story rectangular volume is screened by a partition and connected to the garage by a steel trellis. 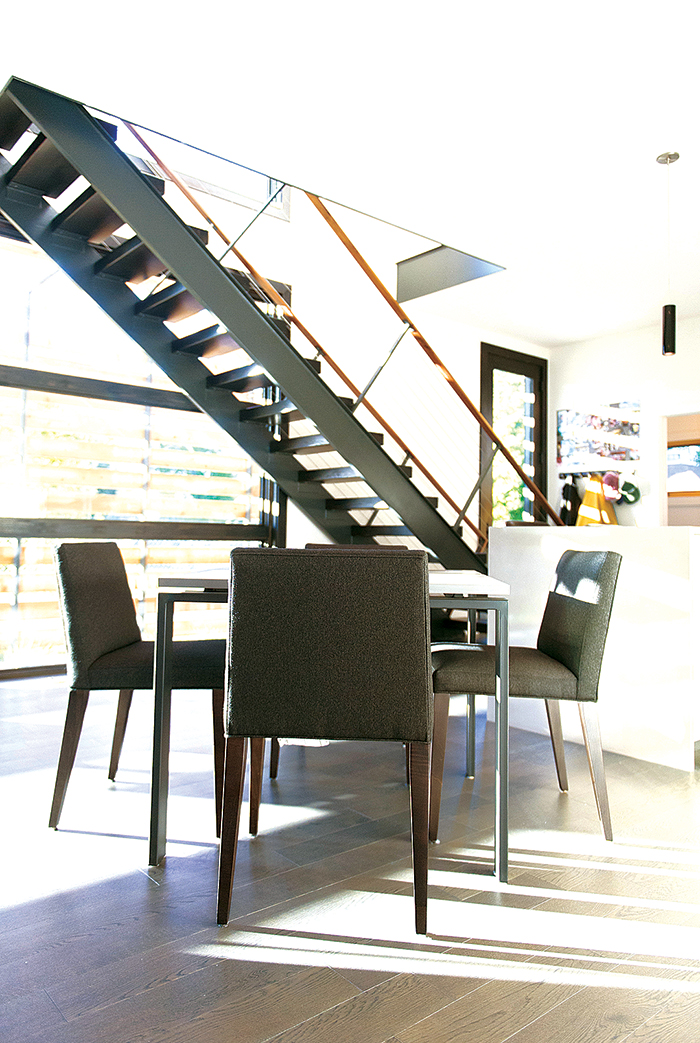 The palette is kept simple and serene in this small home, which makes the most of outdoor living space with floor-to-ceiling windows on one side. 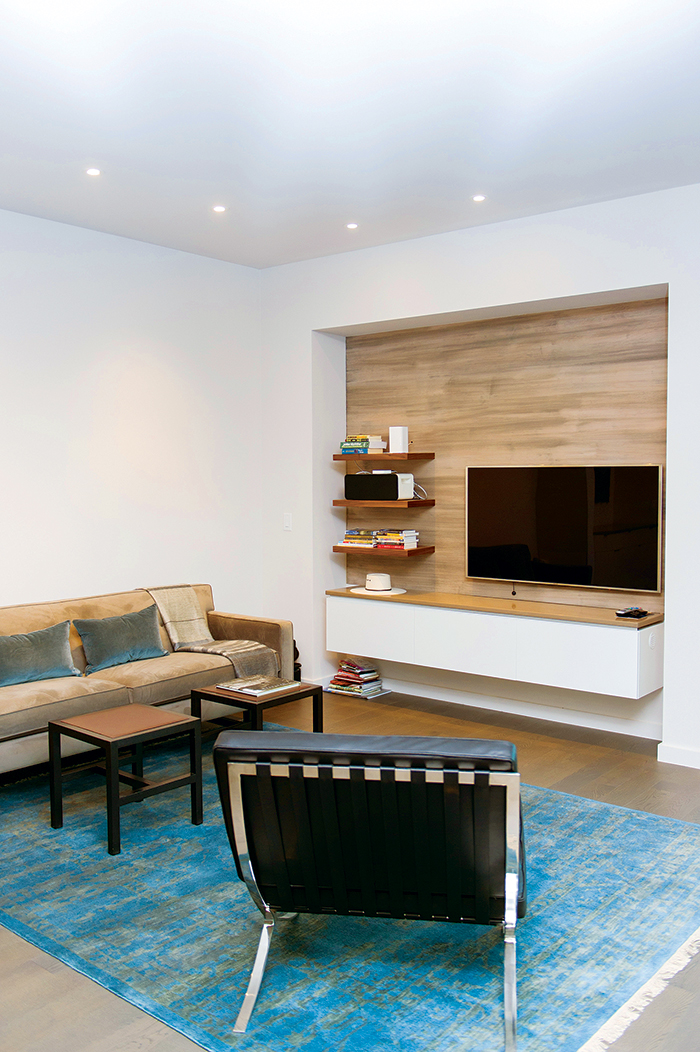 Hardwood floors and high-sheen lacquered cabinetry set the tone in the compact interiors. 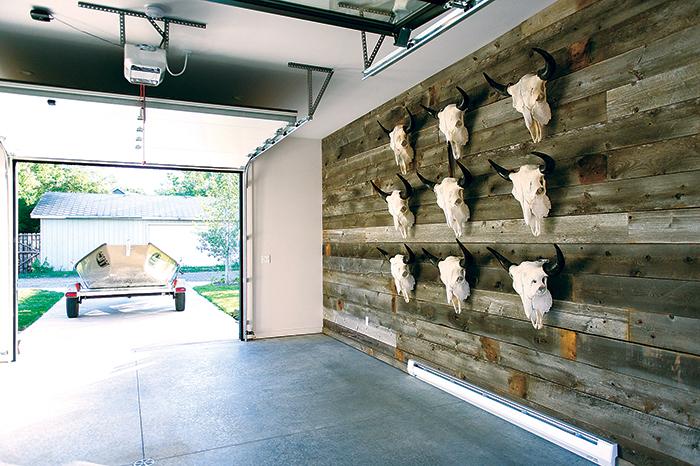 The garage does double duty; it is designed with doors at both ends for guest room cooling in the summer and drift boat storage in winter. 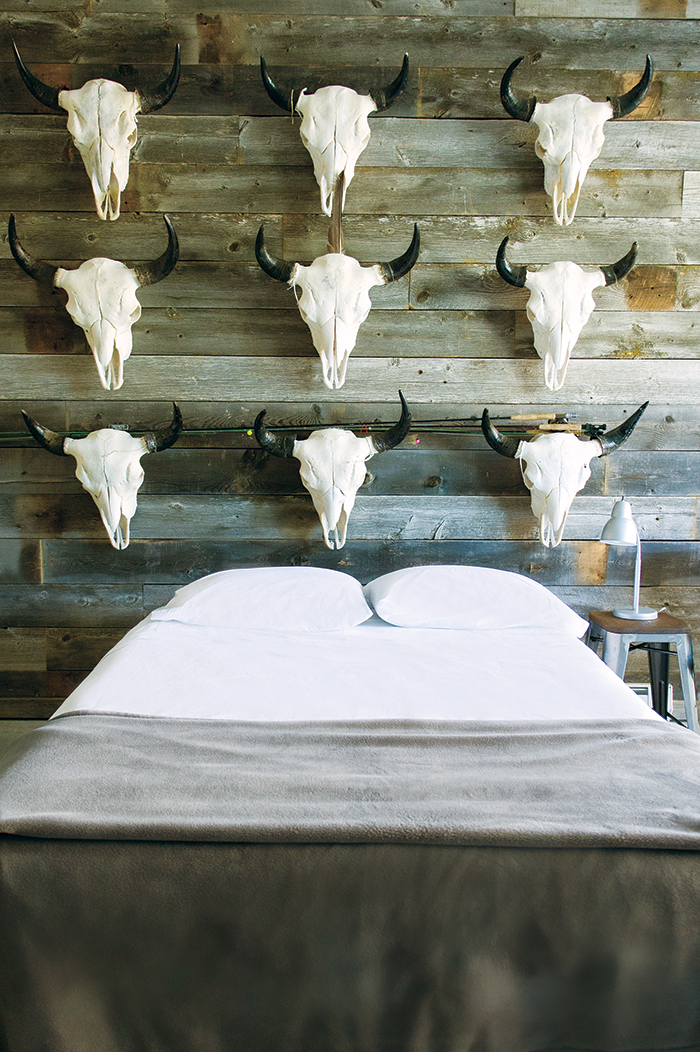 The home has two bedrooms, but most guests opt to stay in the immaculate garage. Bleached skulls on the barnwood wall create a rustic modern headboard. 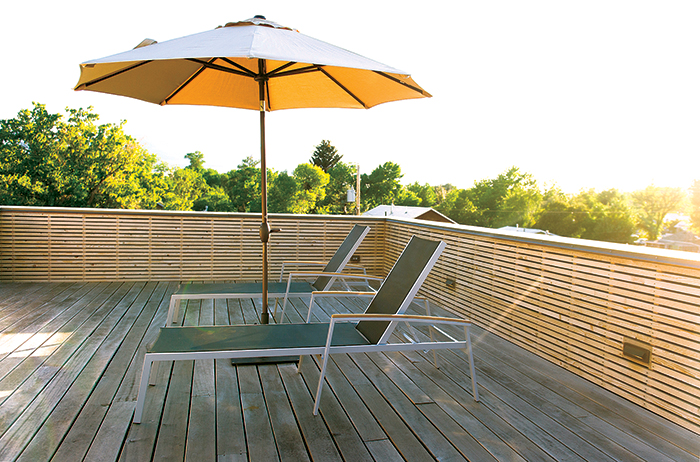