It’s not every day that California designers get a chance to spruce up a place that’s over 150 years old. So it was a stroke of luck when Justine and Catherine Macfee were invited to apply their talents to Nevada’s oldest inn: The Gold Hill Hotel.

Built in 1861 (some say 1859), during Virginia City’s heyday as a mining boomtown, “this hotel is the real deal,” Justine says, with legends, lore and plenty of ghost stories. It’s been a bar, brothel and rooming house, but today serves as a popular spot for locals and visitors alike.

The Macfees were brought in to add a touch of sophistication that might appeal to a young crowd while respecting the property’s past—“Something that felt authentic, but still fun,” Justine says. “Other than move a couple walls and clean things up, we really didn’t touch the architecture,” Catherine adds. “We tried to honor the quirky, rustic charm that it had, and to emphasize it with more contemporary fixtures that still felt in keeping with the space,” Justine says. “It felt fresh but appropriate.”

Because the hotel’s main public space can serve as a breakfast room, guest lounge, community lecture hall or extension of the adjacent saloon, the designers’ overall goal was to make the space flexible. Easy-to-rearrange furnishings vary from European antiques to handcrafted Etsy finds to repurposed relics scavenged from neighboring mineshafts. The rejuvenated space resonates with rich character and historic charm, but it’s also charged with today’s energy.

Authentic meets artful in the hotel’s great room (above), where miners have gathered for over a century. Warmed by the original fireplace and lit by dangling Edison-bulb fixtures from Schoolhouse Electric, the relaxed seating area features a contemporary handmade Navajo rug, wooden coffee tables with wrapped zinc tops, and distressed leather-and-metal Gunnison Chairs from Hickory Chair. Burlap drapes conceal the saloon.

“We wanted to make sure everything had a patina to it, whether it was wood or some kind of basket or crockery with texture,” Justine says. “Every added accessory had to have a little story to it.” The Macfees created a touchstone space by combining a desk and chair original to the hotel (above) with a new leather-wrapped mirror by Jamie Young and an old railroad lantern repurposed as a lamp. 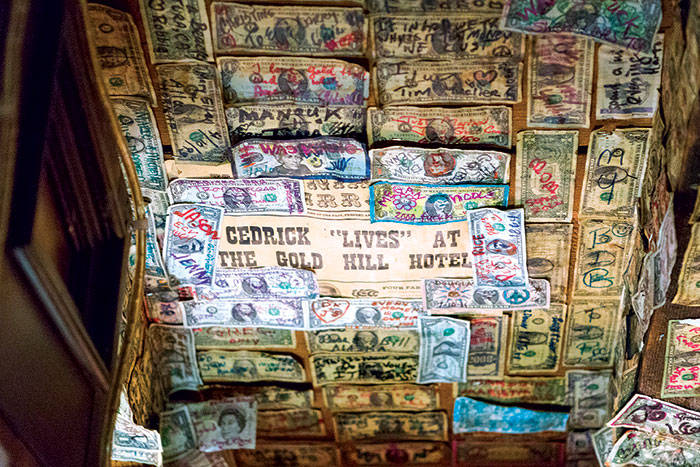 The saloon ceiling is an original Western classic. 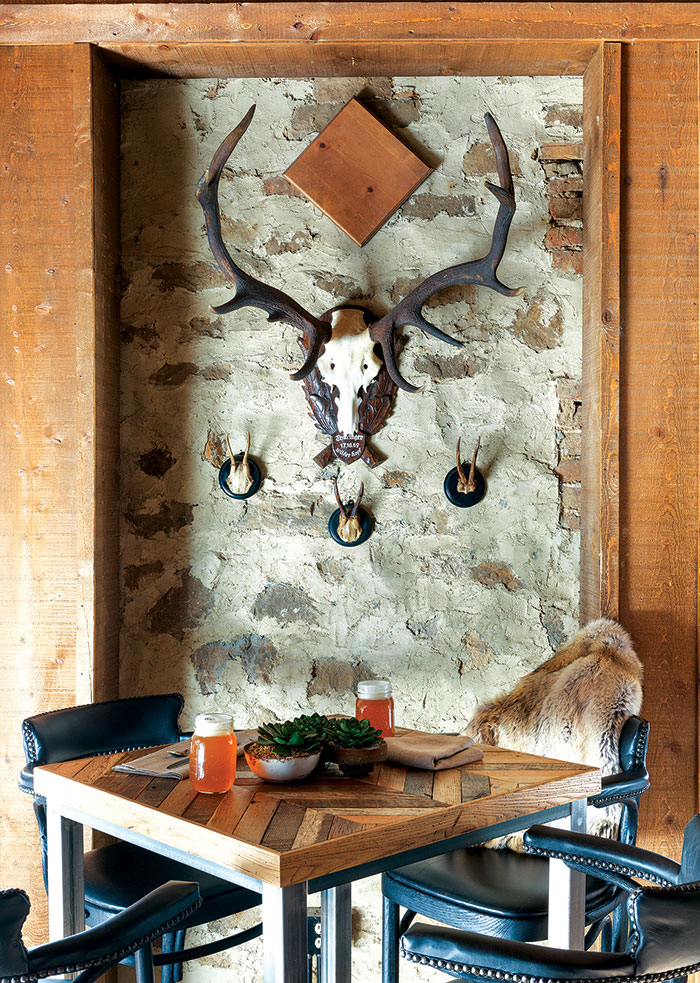 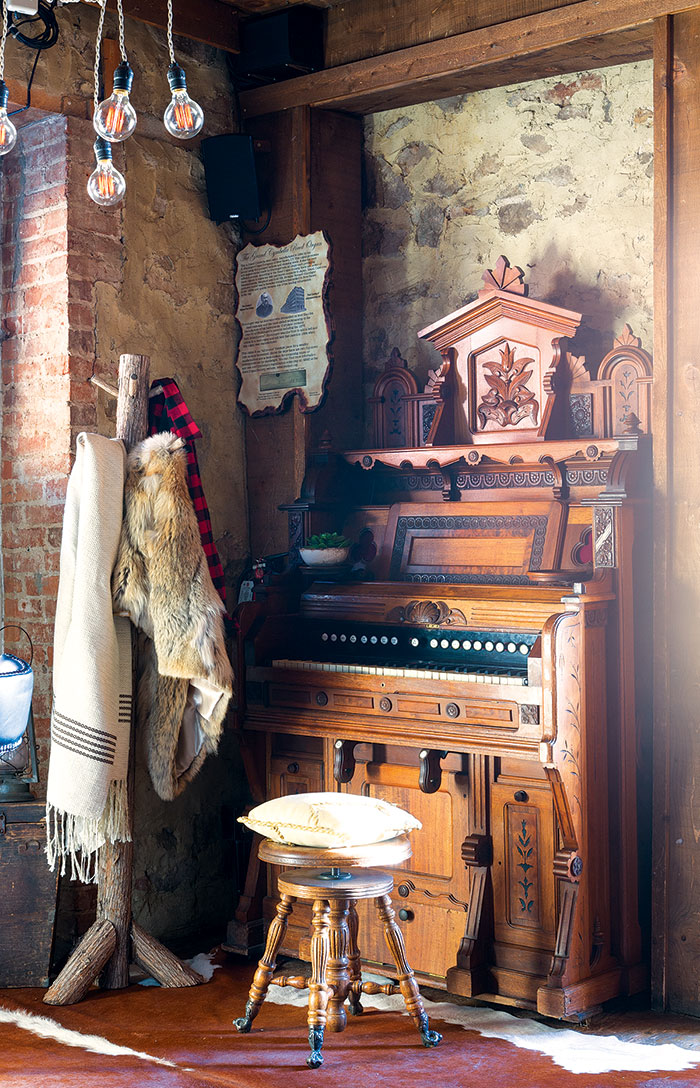 Existing jewels of the hotel’s original décor include an ornate pump organ and an exquisite cast-iron stove. 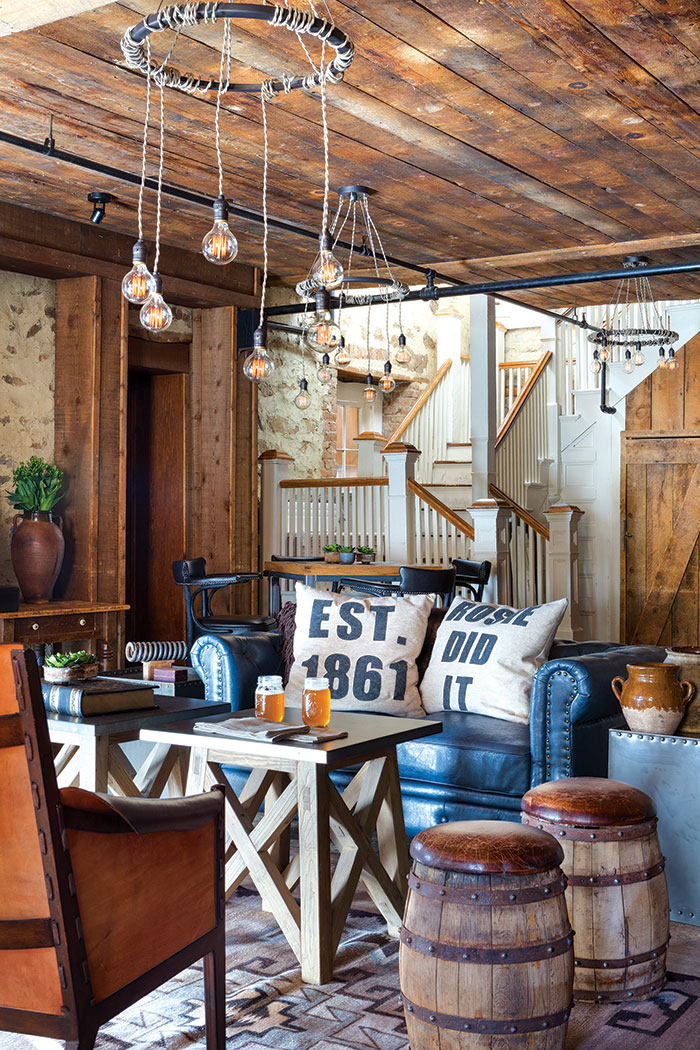 The Macfees replaced heavy Victorian furniture with contemporary pieces for a refreshed mining-industrial aesthetic. A denim-blue leather Chesterfield sofa and end tables with rivets are a playful nod to Levi Strauss, who got the idea for hard-wearing riveted denim jeans in 1872 from a Nevada tailor. Padded leather tops transform salvaged wooden barrels into comfy seating. 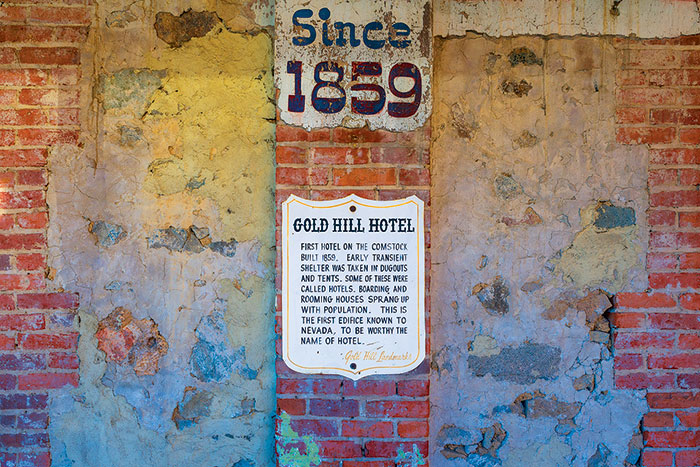 The massive 1859 Comstock Lode discovery of silver and gold brought fortune and fortune-seekers aplenty to the remote Gold Hill/Virginia City area of Nevada. The Gold Hill Hotel would have been nearly brand-new when Mark Twain began writing for Virginia City’s newspaper, the Territorial Enterprise, in 1862. “Virginia City had grown to be the ‘livest’ town, for its age and population, that America had ever produced,” he later wrote. The local populace had swelled to 25,000 by the 1870s, with a cosmopolitan community supporting an opera house and a four-story school big enough for 1,000 pupils, along with mansions, churches, saloons, banks, theaters, breweries, jails, hospitals and a railroad. Twain declared, “The ‘flush times’ were in magnificent flower!” However, the mining boom was already in decline by 1880, and today just over 1,000 people reside in Virginia City/Gold Hill. The area’s colorful history comes to life in local museums and tours. visitvirginiacitynv.com 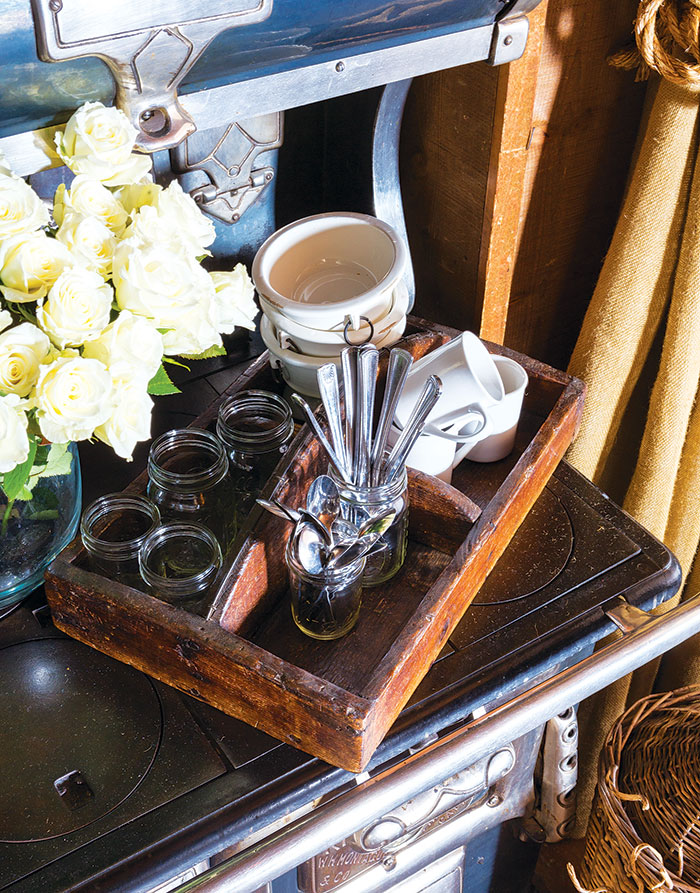 Accommodations range from original historic rooms with brass beds to more modern rooms and suites, some with outdoor patios, private balconies and mountain views. The
historic Bullion Lodge and two-bedroom Brewery Lodge are just across the street. A note to ghost hunters: Rosie’s Room and the Miner’s Cabin behind the hotel at the base of the Yellowjacket Mine are reported to be prime areas for paranormal activity. Rates are $60-$235/night. Dining room and saloon on-site, and ghost tours available.