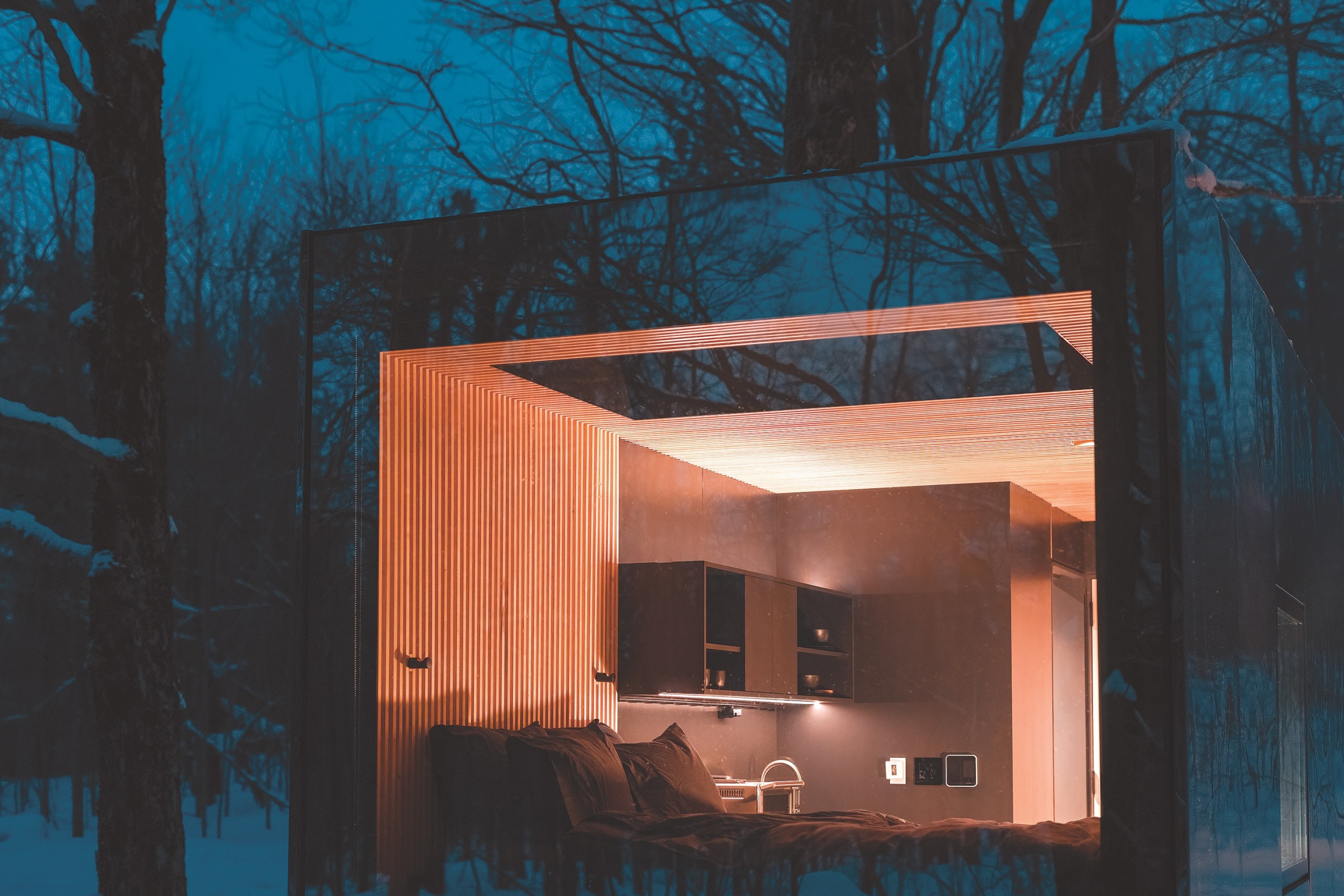 Clad with highly polished stainless steel that reflects the forested surroundings, the twin 275-square-foot cabins at Arcana’s sprawling property about two hours north of Toronto offer a creature comfort-filled space designed to ease urbanites into the wonders of the natural world.

“Something fairly universal happens when you spend time in nature,” says Arcana co-founder and co-CEO Felicia Snyder. “It helps you to think differently and put things in a new perspective.”

“Our mission is to entice people to return to the wild,” she adds. 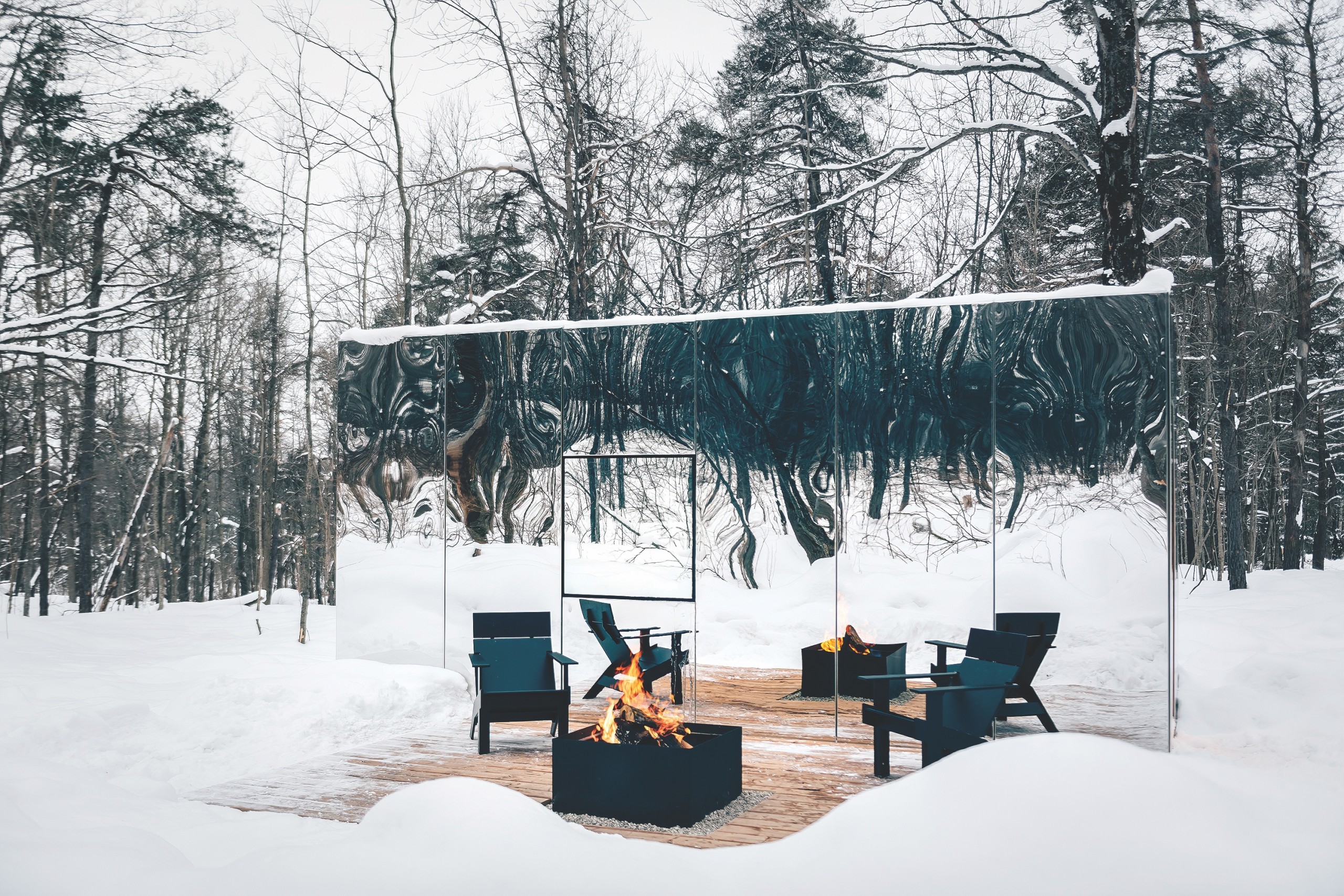 That shift in perspective inspired the polished stainless-steel cladding the cabins, which seems to disappear into the background when seen from a distance. “It’s not perfectly reflective, so there’s an interesting distortion,” Snyder explains.

Far from rustic, the pine-paneled interiors include a kitchenette, a full bathroom, a queen bed, heat, AC, Wi-Fi and a large picture window that “draws you outside the cabin and back into nature,” Snyder says. “It’s magical.” The grounds are likewise designed to appeal to urbanites more accustomed to city streets than forested trails. Clearly marked signage dots the illuminated path to the sauna, for example, which also has a large picture window that frames a bosky view. 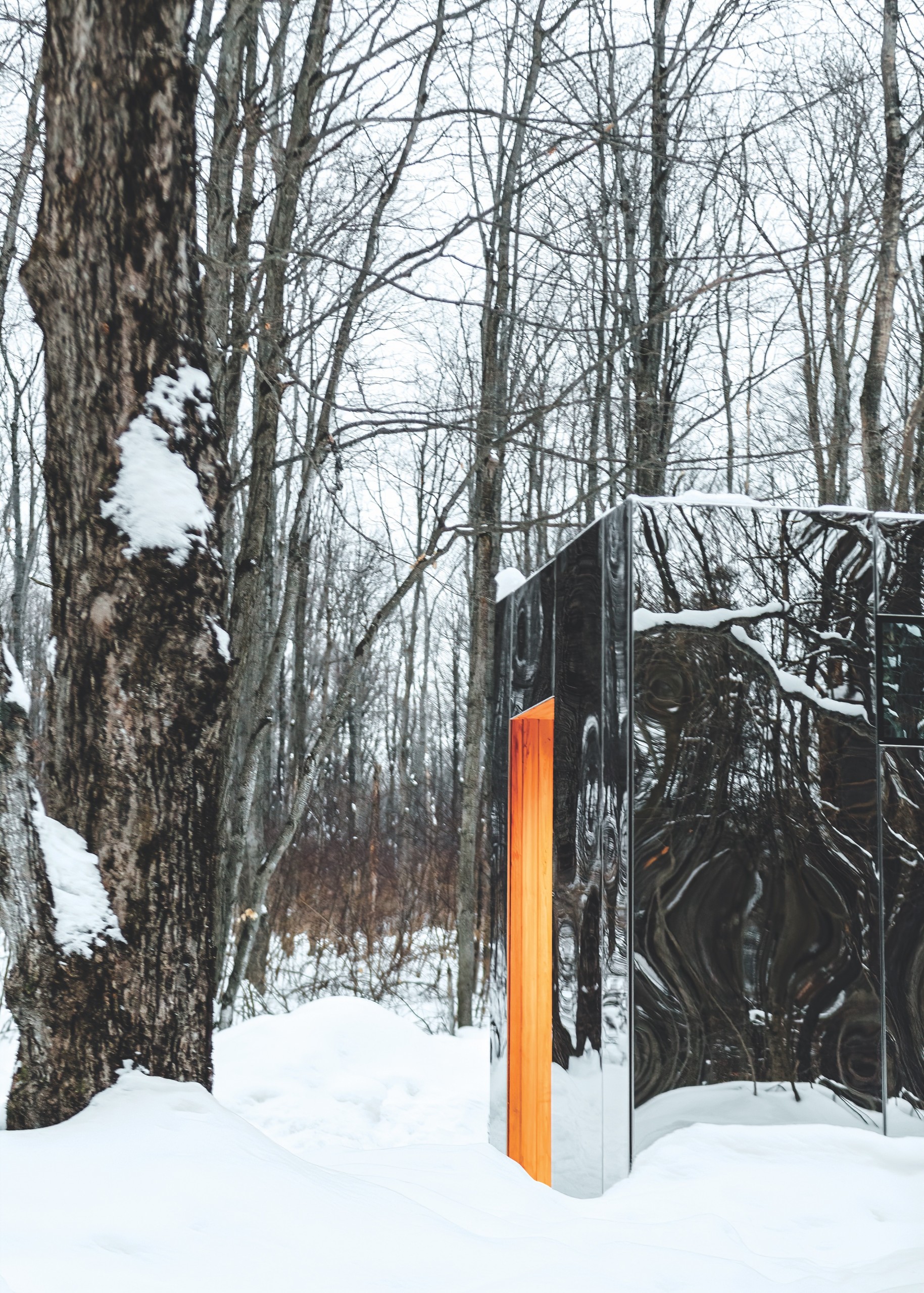 The Arcana team knew they were on to something unique when their early guests raved about experiencing Canada’s snow belt in a way they never had before. (Conceptual cabin seen here.) | Arcana Concept Cabin rendering by Mike Palmer

“The language and landscape architecture is very clear, so you’ll still feel safe and secure,” Snyder explains. “We’re building experiences for an audience that primarily lives in the city, and we want it to be a joyful experience.” 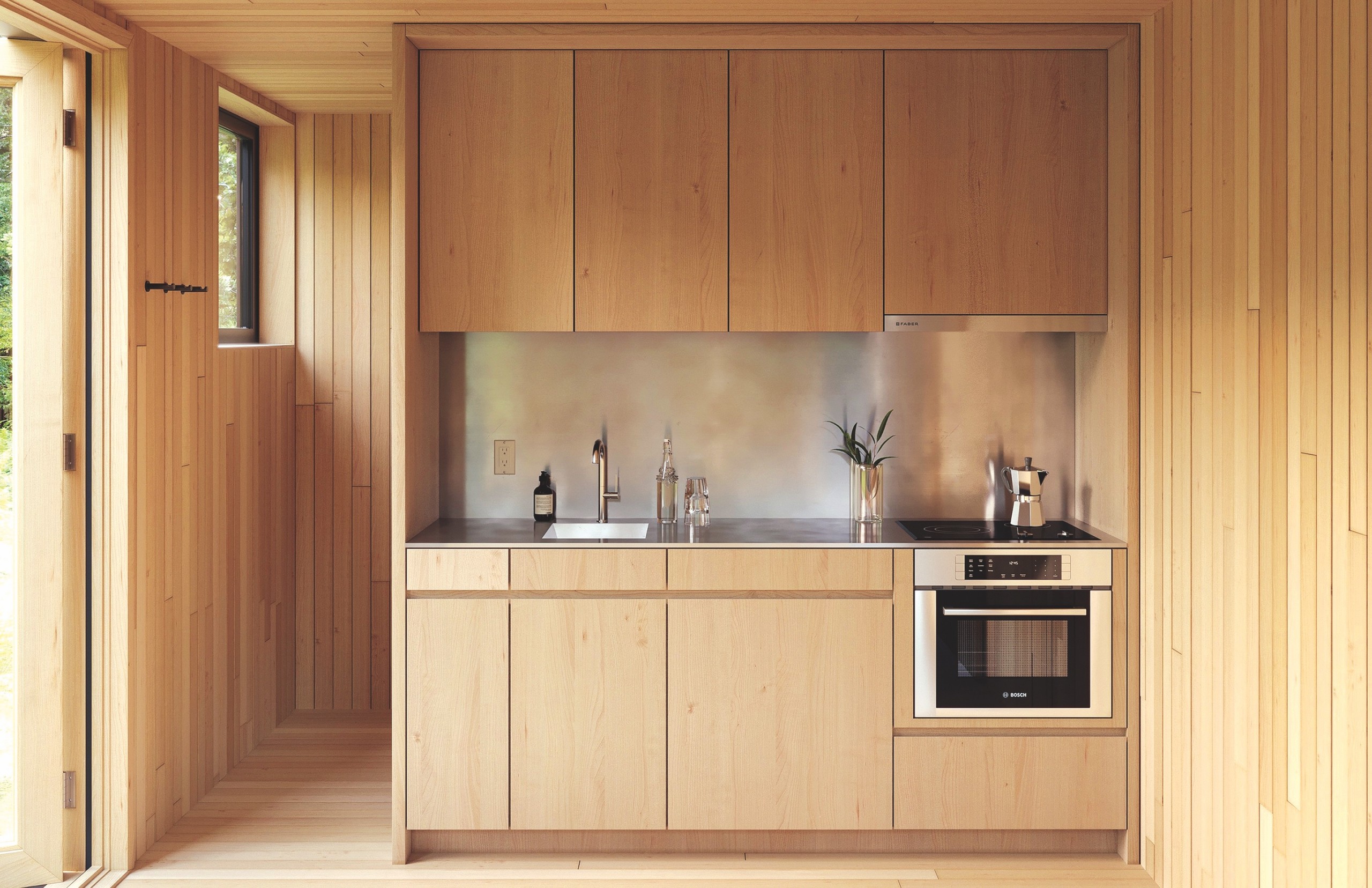 Designed to appeal to both dedicated campers and urbanites more accustomed to five-star digs, the mirrored cabins feature pine-paneled interiors with all deluxe amenities such as a well-appointed kitchenette with integrated stainless-steel countertops and backsplash. (Conceptual cabin seen here.) | Rendering courtesy of Arcana

Other on-site activities include a cold plunge pool, the Japanese custom of shinrin-yoku, or forest bathing, 15 kilometers of hiking trails and a custom meditative sound journey created in collaboration with the Woom Center and The Dojo Upstate sound studio. “It’s using the science of sound to transport your mind to a place where it can ground and repattern,” Snyder says.

The experience is fantastical during the winter, when the property’s location in Ontario’s snow belt virtually guarantees a white winter wonderland. “Some people said it was their first chance to experience the Canadian winter in a way that felt very close and personal,” Snyder says of Arcana’s first guests prior to its official opening. “That told us we were on the right track.” 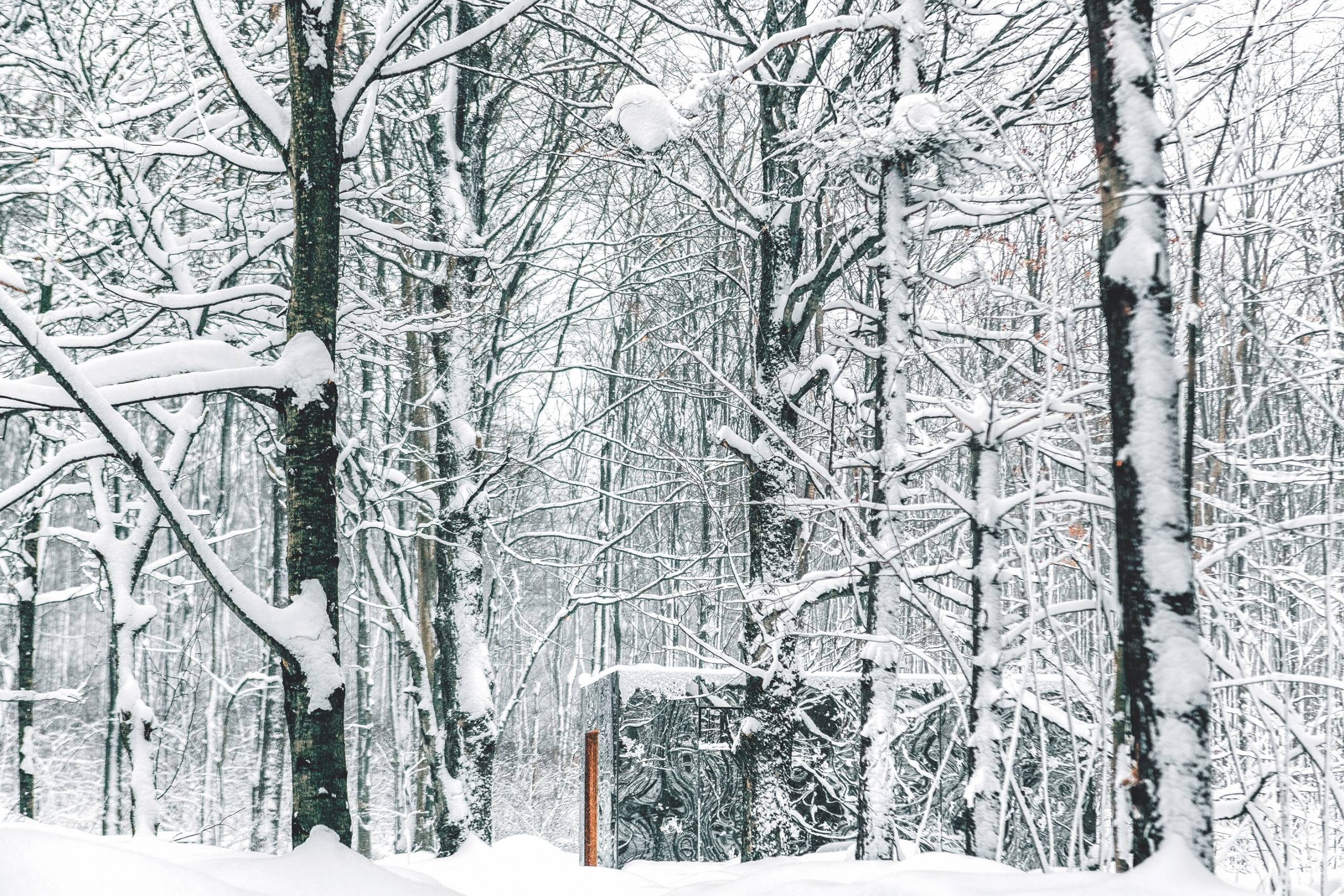 “In many ways, this is our innovation lab,” says Arcana co-founder and co-CEO Felicia Snyder, who has big plans for the company’s future, with plans to launch two additional sites over the next 12 months, including one in the United States. (Conceptual cabin seen here.) | Arcana Concept Cabin rendering by Mike Palmer

Indeed, the company is already scouting future sites in Canada and the United States, with an aspirational goal to one day expand across the globe. Snyder hopes that the experience stays with people, prompting both epiphanies and a different perspective.

“In the wild, there’s a level of understanding and comfort, and you sort of know your place in the universe,” Snyder explains. “Hopefully our guests will bring this feeling back home with them.”

17 Mountain Homes in the Winter