Meet the Artist Behind the Ski Maps 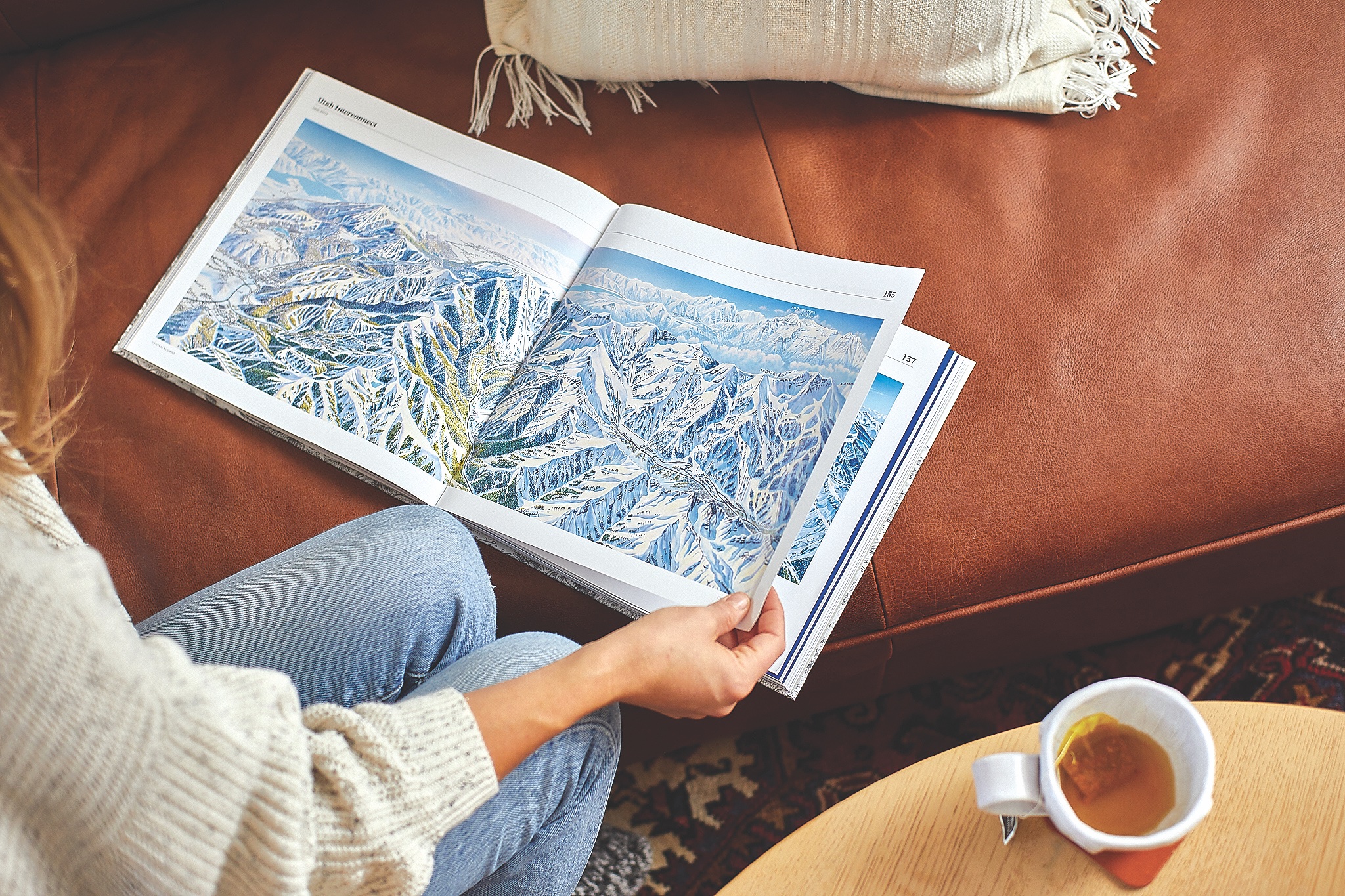 Niehues’ paintings have guided mountain adventures across the world, but they’re more than maps. The artist captures the spirit of the outdoors in his work. | Photo by Open Road Ski Company

If you’ve skied, odds are you’ve seen James Niehues’ artwork. Skiers encounter his paintings every day, unfolding a tattered map on the lift or pausing at a plaque to plot their run.

His maps are so ubiquitous that people rarely stop to notice the artistry that goes into them, but Niehues’ pieces are the work of a master. A closer look reveals an astonishing level of detail, from the patches of trees to the play of light across the peaks. 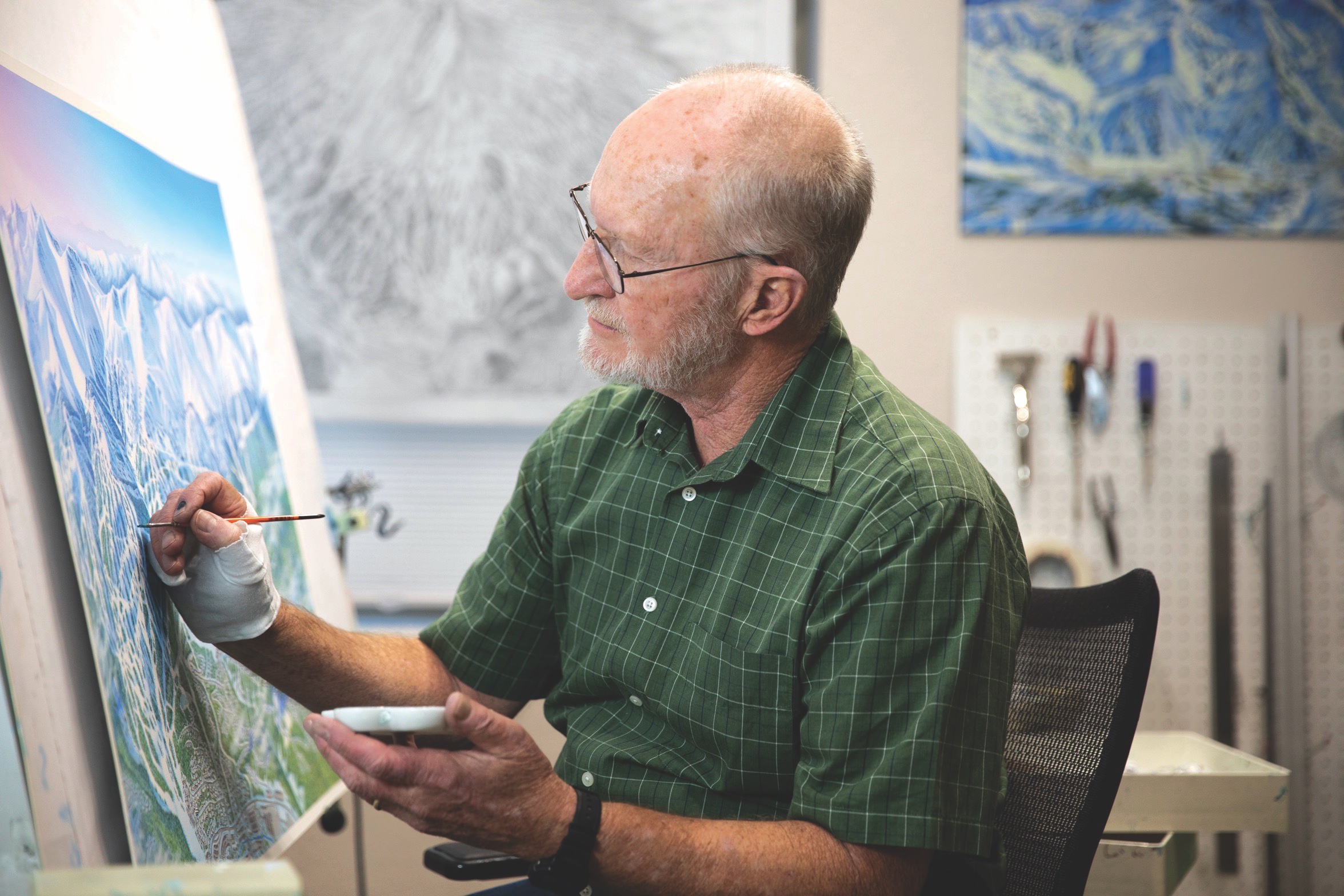 Niehues is the latest in a tradition of American trail map artists. Earlier in his career, he revised his predecessors’ maps when a resort added a new lift or piste. “At the time there was no other way to do it but remove the watercolor and repaint it,” says Niehues. | Photo by Lindsay Pierce Martin

Like all masters of their craft, Niehues arrived at his personal style through years of work and by studying his predecessors, but he had always been an artist.

He grew up in Loma, Colorado, and drew throughout his childhood and a four-year stint in the Army. He then worked in various printing jobs and as an illustrator for an automotive company. He eventually met trail artist Bill Brown after moving to Denver in the 1980s. 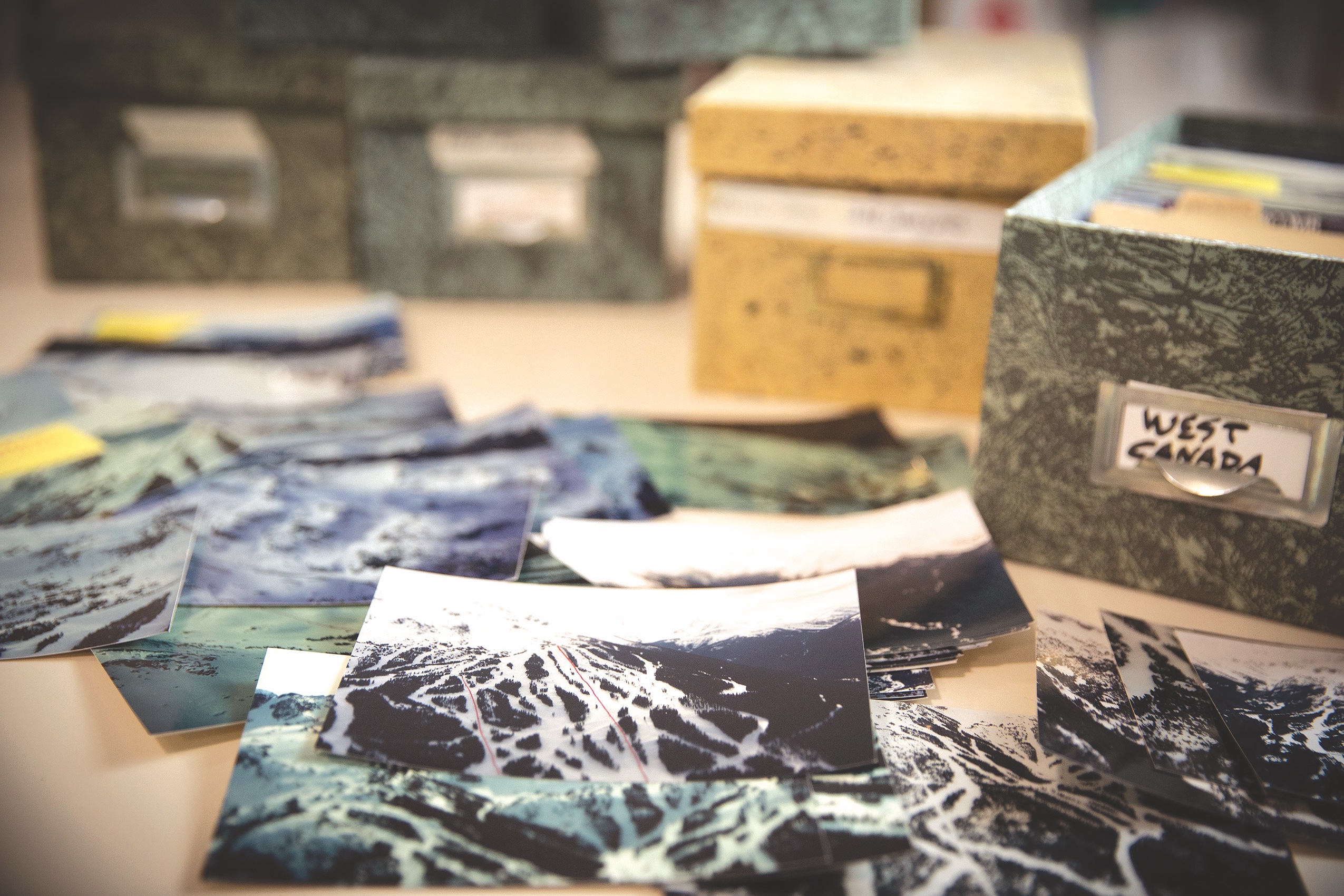 Sometimes Niehues takes reference photos himself from an airplane, starting 1,000 feet above the summit and descending to photograph the whole ski area. | Photo by Lindsay Pierce Martin

Brown gave him an assignment: paint the Mary Jane runs at Winter Park. “I think I spent a month on that little illustration,” Niehues recalls, “trying to match the style.”

Brown’s clients were thrilled with the work, and as Brown was leaving the trail map business, Niehues’ career was born.

Today, Niehues has painted trail maps for most major ski resorts in America, as well as internationally, including Chile, Serbia, China, Japan, Korea, Australia and New Zealand. Every painting starts with research.

Niehues studies aerial photographs, which he sometimes takes himself, along with a plan of the mountain. “I’ll take that information and lay down my lift lines so they all connect like they should,” says Niehues. 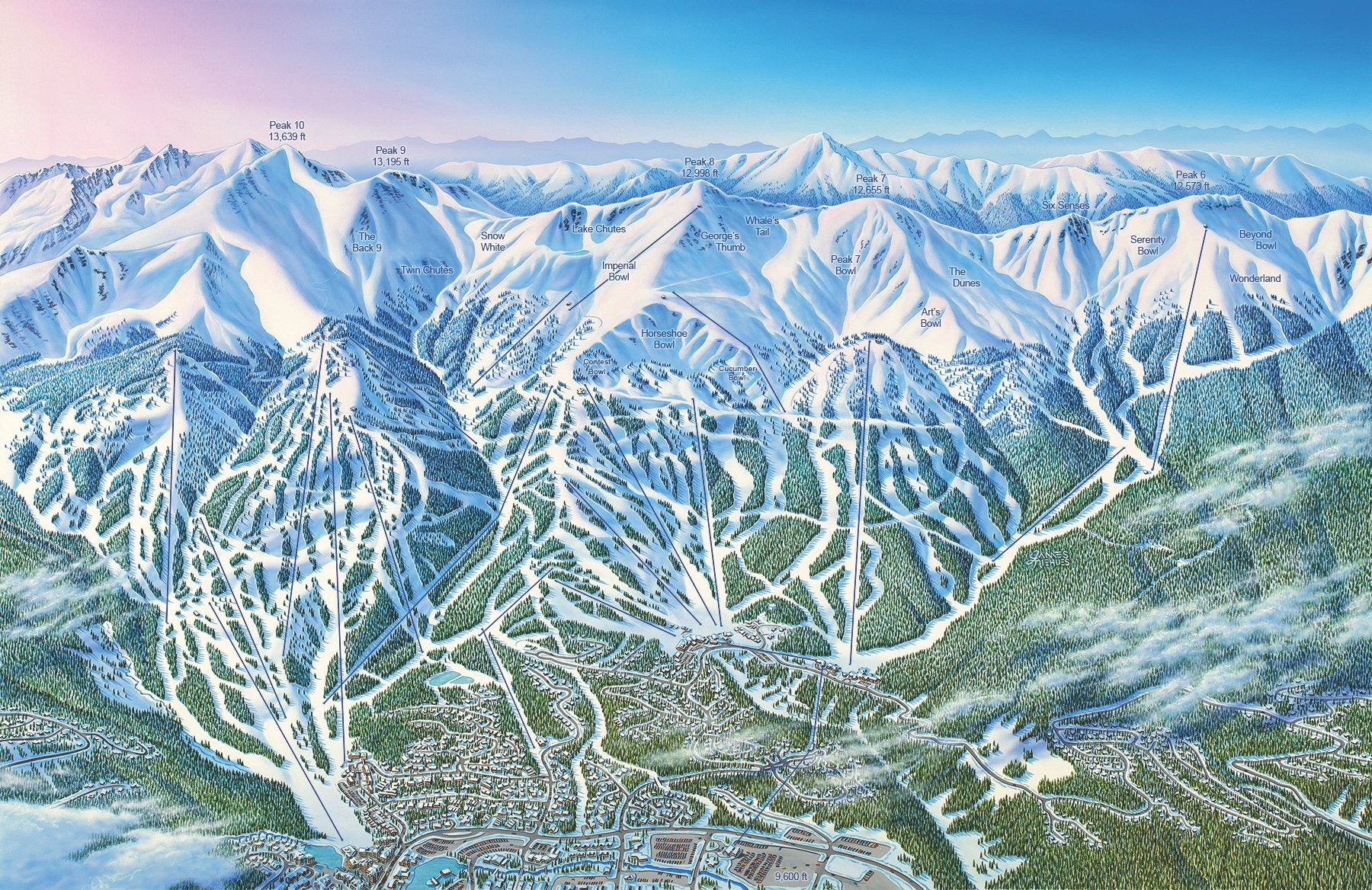 Niehues’ Breckenridge, while accurate, shows a side of the mountain no photo could. “From the air, the mountain’s only blues,” says Niehues. “I paint the colors as you would see them skiing.” | Photo by James Niehues

There’s more to it than accuracy, though. It’s rare that a whole ski area can be seen from one angle. “I manipulate it, pull the slopes around so that it comes into view,” he explains. “I’m careful to illustrate it so that people feel like they skied the map.”

This balance of accuracy and artistic interpretation is important not only to the usefulness of the maps but also aesthetically. Capturing the spirit of these vistas goes far beyond accuracy.

“We take photos and say, ‘It doesn’t do it justice,’” says Niehues. “And it never will. You remember it in your mind differently than when you see it in a photograph. I’m trying to interpret it so that it is closer to how you remember it being. As magnificent as it really is.” 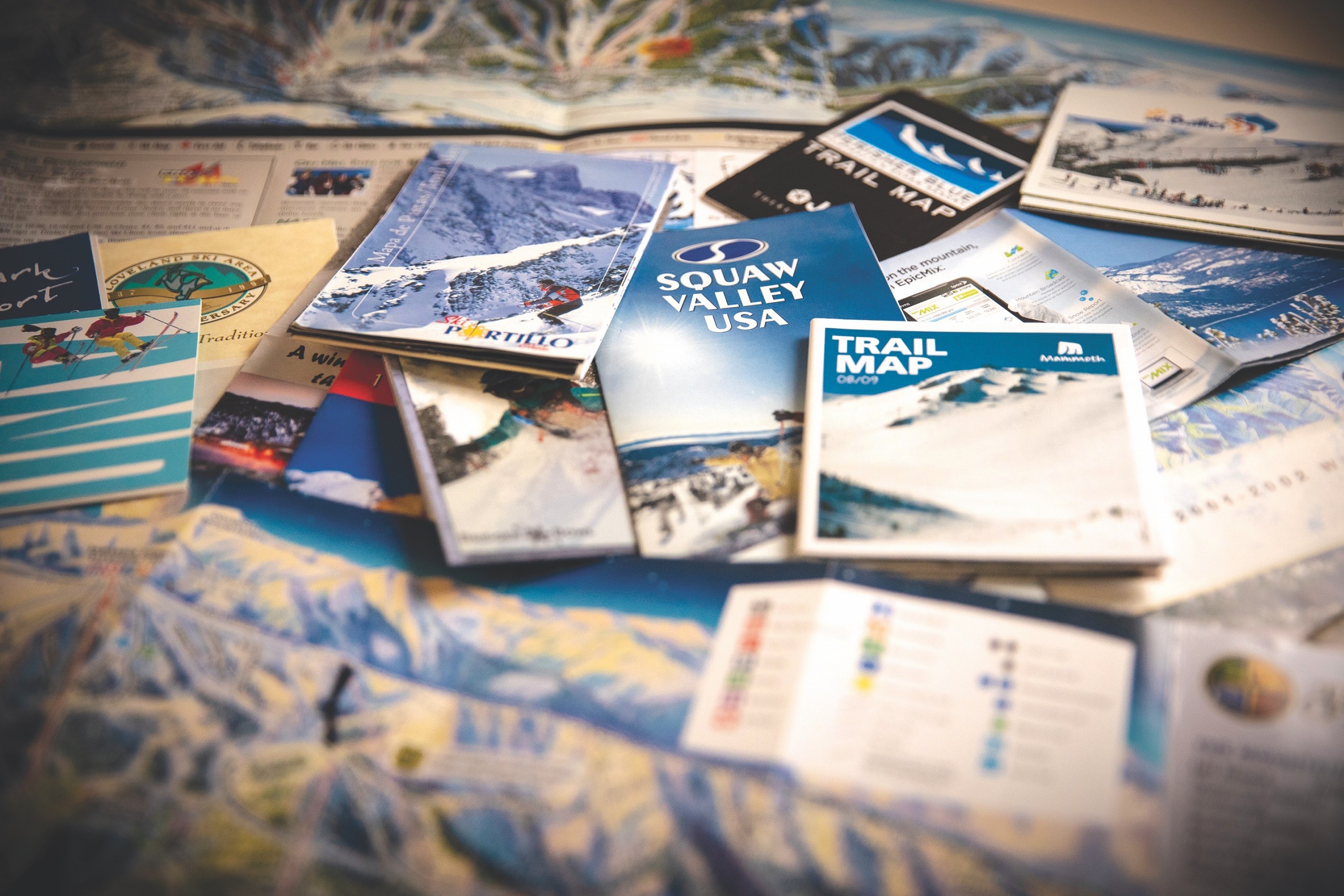 People are often surprised to learn that Niehues is not an avid skier. “I have enjoyed skiing. But if I get on a more difficult intermediate,” he laughs, “I ski with fear.” He loves the outdoors, though, and he has left his mark on the slopes in other ways. | Photo by Lindsay Pierce Martin

His latest endeavor, the Great American Landscapes project, in which he sketches the most iconic U.S. national parks, is a perfect example. A waterfall that might be hidden from certain vantage points would be visible in the sketch.

In this way, he honors the park’s grandeur and the experiences of the people who’ve seen them. Niehues’ ski maps are now collected in an eye-catching coffee table book available through his website.

Published in 2019, The Man Behind the Maps features more than 200 resort trail maps collected over 30 years of his career. Readers can retrace their favorite slopes, reconnecting with their memories of the mountains.