It’s fair to say that every marriage is a balancing act. So when a married pair of architects—in this case, Sally Brainerd and Jack Snow, co-founders of Edwards, Colorado-based RKD Architects—set out to create their own family home, it was a chance to show just how beautifully they are matched.

Early on, they decided that Brainerd would be in charge of the design, while Snow would oversee the construction. “She played all her spousal cards on that one,” Snow recalls. “I think I even cried at one point in order to get my way,” Brainerd admits with a laugh. But it was a true collaboration. “We’ve worked together so much, passing projects back and forth,” Snow explains. “It’s our style, more than one or the other; we don’t second-guess each other’s big thoughts.” Of course, that’s not to say that they always see eye to eye. Brainerd jokes, “He was the client from Hell during design, and I was the client from Hell during construction,” before adding, “Seriously, our only real disagreements were about a few details.” 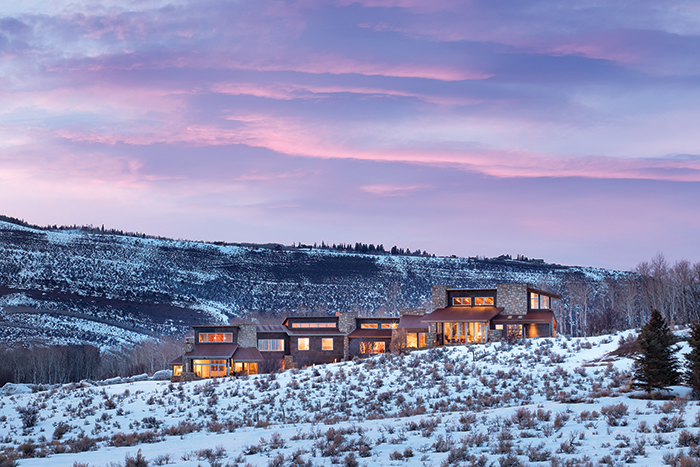 The home’s idyllic setting—atop a ridge at 8,500 feet elevation—inspired the architects to design a series of adjoining shed-like structures following the contours of the land. “It’s all about views and sun!” Brainerd says. “We strung the spaces across the site so that the primary living spaces all have south views,” she explains. “And the site backs up to an aspen forest, which gives privacy and protection to the north. It’s a perfect passive solar setup in a beautiful spot.”

The economic downturn of 2008 forced the couple to pause their progress on the house, and they ended up living in the guest suite for 10 years while they prepared to complete the rest of the project. Yet, despite the frustrating wait and the cramped quarters, their initial concept for the finished home never wavered. “If it took a while, it took a while,” Snow reflects with equanimity.

Brainerd and Snow like to describe their house as “an industrial mountain sculpture,” with battered stone walls and patinaed steel panels recalling Colorado’s early mining and ranching days. “The intent is to have the angular stone forms—sort of like a rock outcropping on the ridge—with the glass and metal portions filling the in-between spaces,” says Brainerd. “Clerestory windows run the length of the house and serve, along with the generous roof overhangs on the south, to help naturally cool the building,” she explains. “And they let the hummingbirds out when they come flying in.” 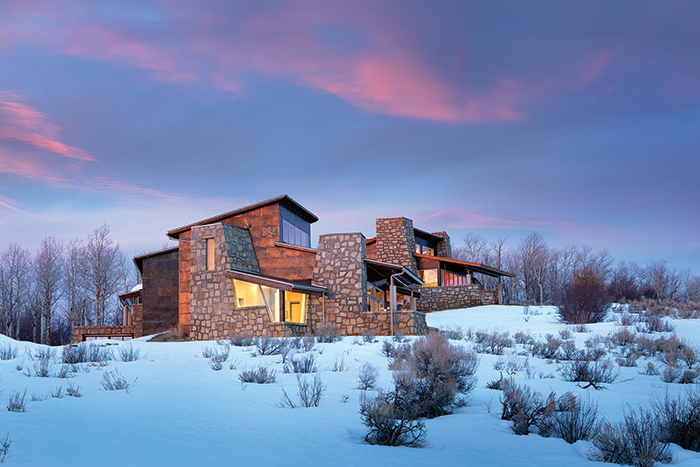 Inside, the rooms are airy, sleek and unfussy. “I have a strong inclination to want to see structure, and I wanted to have a certain ‘utility’ feel,” says Brainerd. “Materials are used in their raw forms—concrete floors, structural steel decking on the ceilings, exposed steel I-beams and electrical conduit, and of course the bar joists.”

To fit perfectly within that framework, most of the home’s furnishings were custom-designed by Snow and Brainerd. “It needed a heavy feel—big, sculptural moves,” Snow says. They chose a harmonious natural palette of honey-toned and rich brown wood and leather-upholstered pieces to complement the limestone surfaces, concrete floors and steel wall panels. They added a number of clever built-ins too—including bookshelves and planters.

“Almost always, we bring potential clients up here to see how they react,” Brainerd says. “It has become more common for people to come into the office and say that they are interested in a ‘mountain contemporary’ style, but I think our house adds a few more dimensions to that—specifically the ‘industrial’ and the ‘sculptural.’ Some people really respond to those things, and you can tell right away.”

So, after 18 years, is the house finally finished? Brainerd pauses, then declares: “More or less finished.” In counterbalance, as always, Snow responds: “Are they ever finished?” 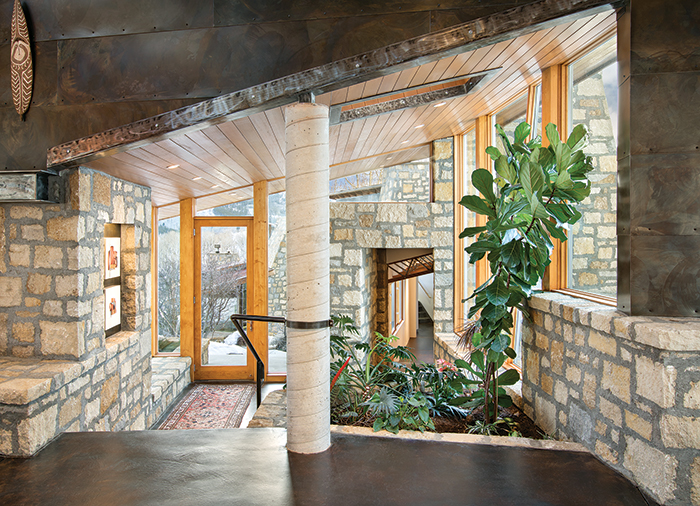 Built-in planters add a fresh note. “The winters up here get long, and I think of the interior plantings as our air-purifier/humidifier when nothing outside is doing that job,” Brainerd says. 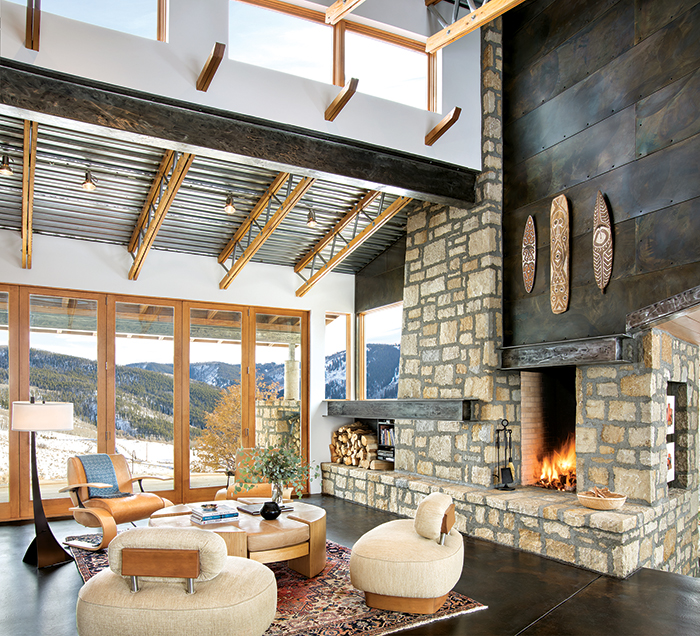 The airy living room emphasizes the raw beauty of its structural materials, softened by curvy seating and a coffee table designed by architect and homeowner Jack Snow. A trio of New Guinea ancestor boards hangs above the fireplace. 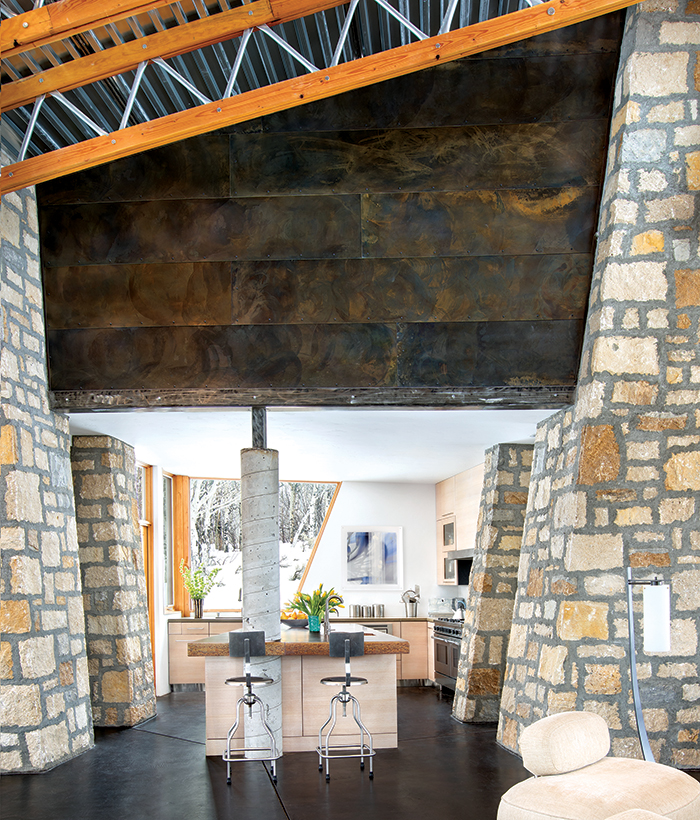 The kitchen is sleek and clean thanks to a huge hidden pantry. With few upper cabinets, the windows reach down to the concrete countertops. 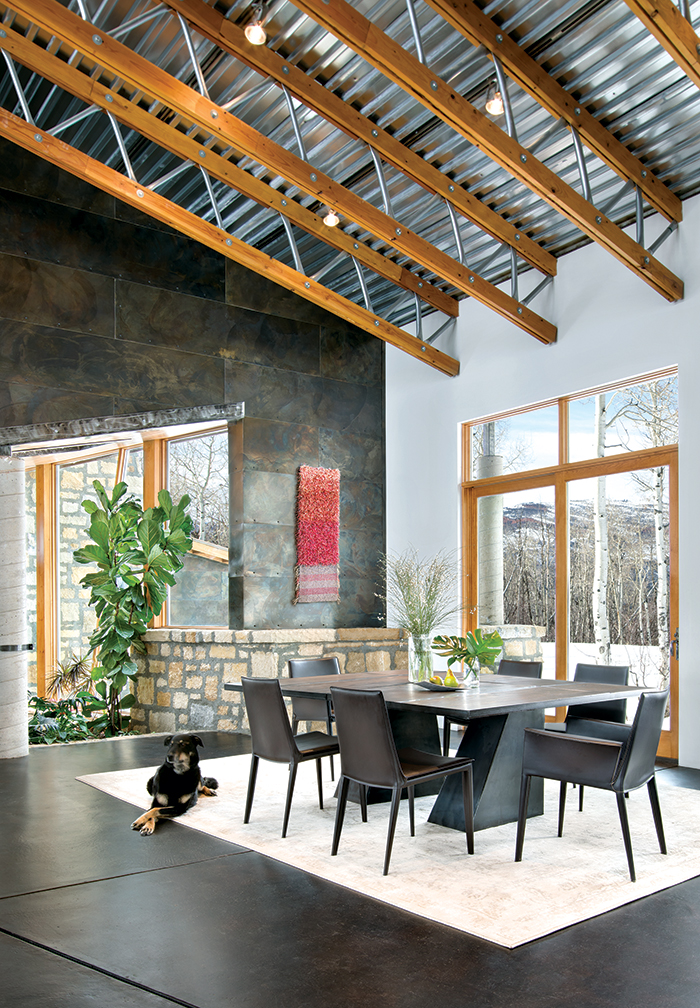 Brainerd likes the “off-the-shelf vibe” of the corrugated, galvanized steel ceilings and bar joists. She also designed the steel-and-oak dining table, which can be divided and rearranged for different seating options. 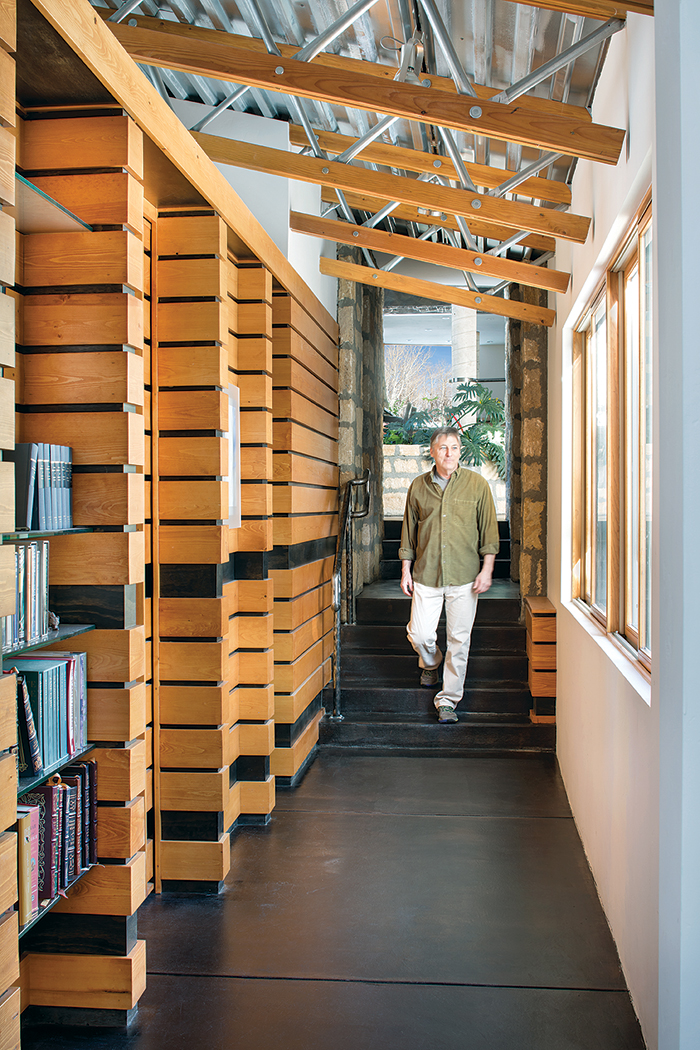 The light-filled hallway has fir-slatted walls and integrated shelving. 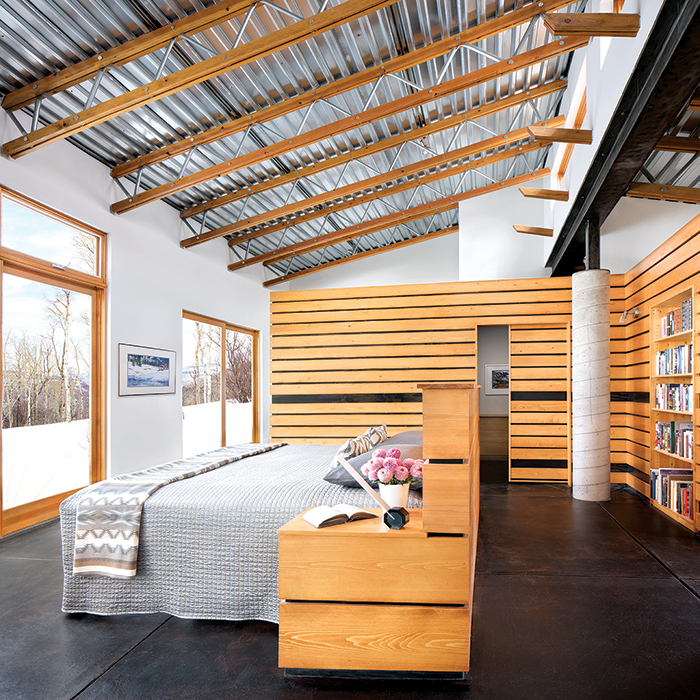 The master bedroom faces a meadow where last year a mountain lion was “looking in and drooling,” says Snow. 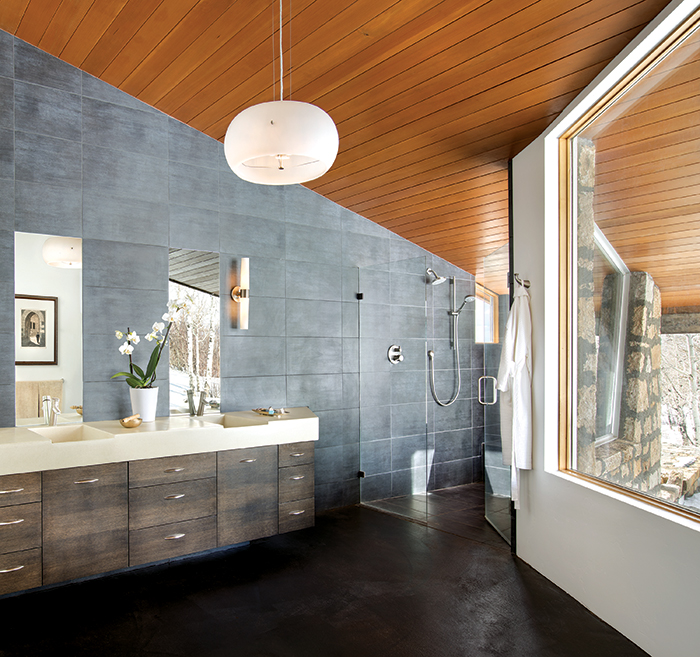 The master bath is bright, with sleek porcelain tile walls. “We’re not tub people,” Brainerd explains. “When you stand in the shower you kind of feel like you’re outside.”

FURNITURE THAT FITS
Jack Snow and Sally Brainerd designed not only their own home but most of their furniture too. Here, Snow shares some insights on creating furniture that’s a perfect fit.