How to Become a Zen Fly-Fishing Artist 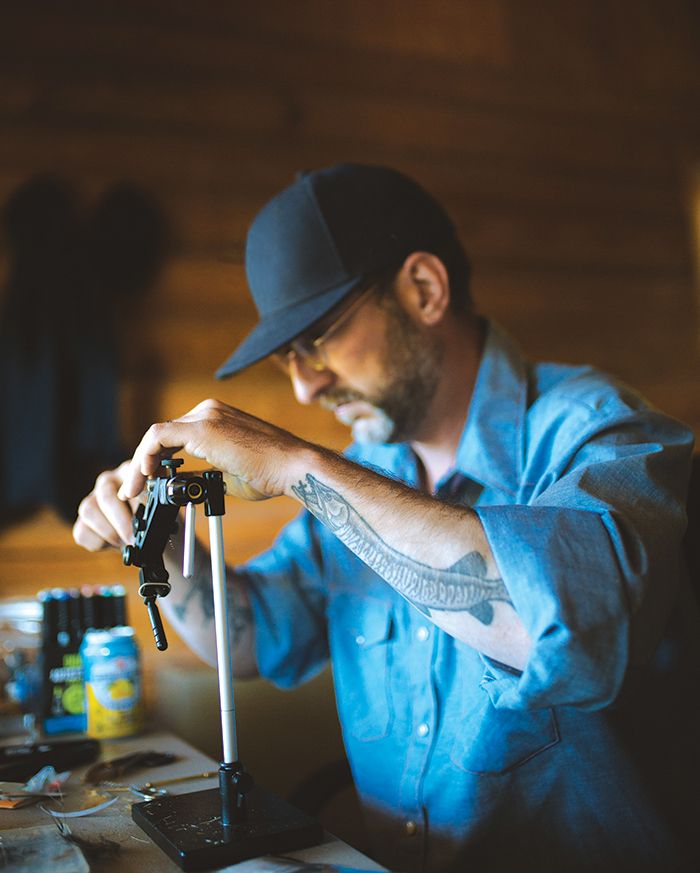 Piacquadio concentrates as he ties flies, a craft that requires fine motor skills, mindfulness and creativity. He then captures the flies in pen-and-ink drawings. [All photos by Eric Bunting]

When John Piacquadio was a little boy growing up in the Bronx he wanted to be two things according to his baby book. “An angel or a fisherman,” he says. “And that’s odd since I lived in the middle of the Bronx and my dad wasn’t really an outdoors guy.”

Still, about once a year he went fishing on his dad’s friend’s boat in New Jersey for sharks, bluefish and smaller ocean fish. Piacquadio was hooked.

In school he gravitated to books about the outdoors and fishing, and when he was 13 his family moved to Connecticut with access to the water—and Piacquadio taught himself to fly-fish. “It is not easy to do; there’s a very steep learning curve, but I had a mysterious determination.”

Fast-forward to college, where he  studied art and religious studies. He eventually moved to Montana and started tying flies with clients he was guiding on rivers. “Tying flies takes fine motor skills, creativity and mindfulness—it’s a type of meditation that keeps me grounded in the present,” Piacquadio explains.

“I came up with the idea for this body of work on my porch one night, thinking about what it would be like to combine a few important aspects of my life … meditation [along] with my love of fishing and art.” Flies are created from ”recipes”—patterns that show how to create a specific fly. “Some recipes date back to ancient Macedonia,” Piacquadio says. “I asked myself, ‘I wonder how well I know these flies? I know each turn of thread in binding the feathers, I wonder if I could express it in a medium that is unforgiving?’ I started with brush and ink, striving to be true to that fly, most of the time without pencil drawing, capturing it in an Asian-inspired work of art.

At The Ranch at Rock Creek, near Missoula, Montana where Piacquadio works as a fly-fishing guide, many of the ranch guests are from the East Coast, and some have never fished before. “The ranch is a great entry point into the Montana wilds,” he says. “I take them out fishing, and then I take the fly off, paint it, double matt and shadow box the fly. It’s an environmental way to commemorate the fish. Fly trophies celebrate that first fish caught on a dry fly or the big rainbow that you caught and set free.”

Flies are created from recipes—patterns that show how to create a specific fly. Some recipes date back to Macedonia. 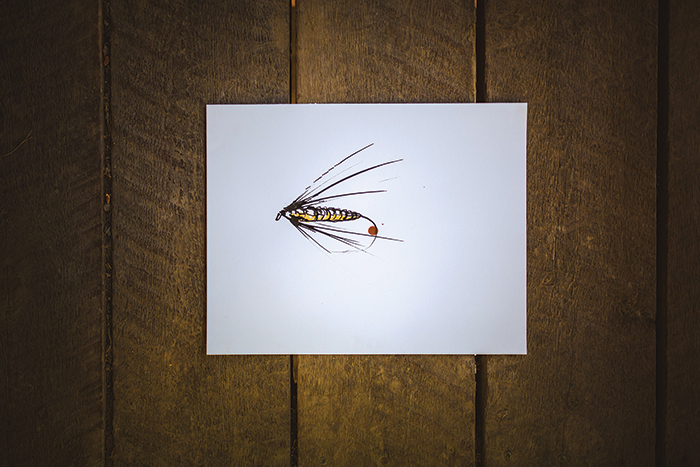 Piacquadio will shadowbox-mount the fly that caught the trout, along with a drawing of the fly, and frame it as as a new type of environmentally friendly trophy to commemorate the fish.