Hotel Jerome Changes With The Times

The historic hotel expands its offerings by purchasing its next-door neighbor, The Aspen Times building

Since 1889, the Hotel Jerome, Aspen’s crown jewel, has occupied a corner of Main Street as the town evolved from mining mecca to world-class ski resort to Hollywood’s playground. And as the hotel’s guests have changed from silver barons to media moguls, so have their needs; a handsomely appointed hotel room that once fulfilled traveler expectations may not always meet today’s square-footage and amenity requests. 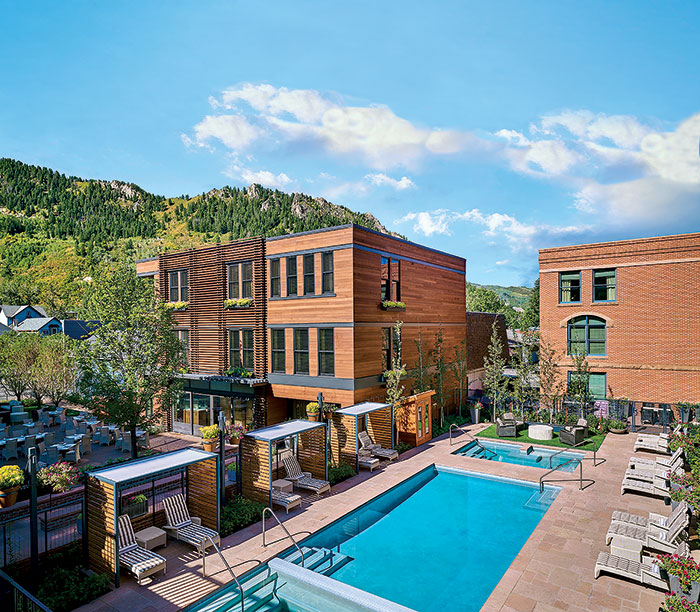 An invitation to relax—the revamped swimming pool area has been expanded to include two additional hot tubs. 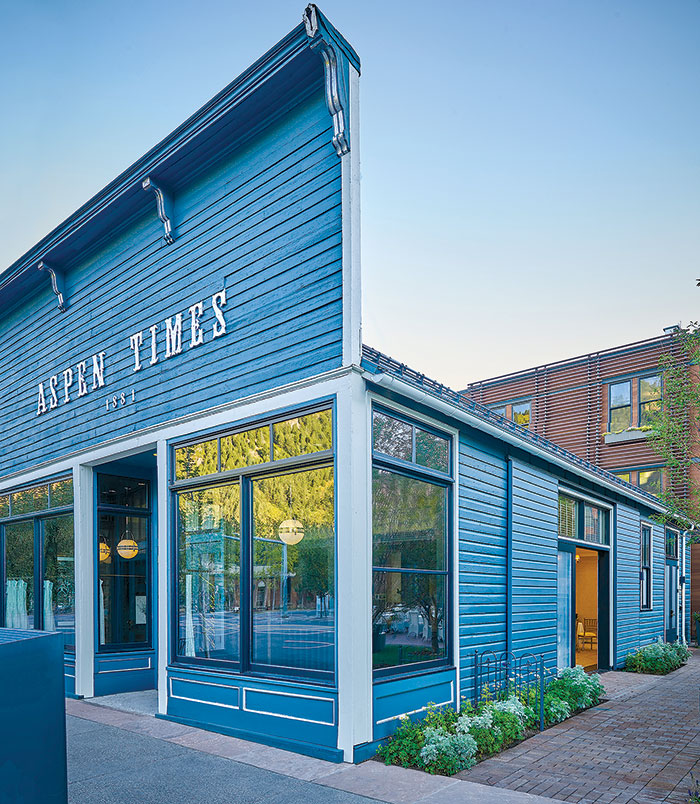 Rowland + Broughton was tasked with blending two visually opposed historic buildings—the landmark Hotel Jerome with its stately brick façade and the 1904 Times building—as well as designing a three-story addition. “Our goal was to preserve, enhance and highlight the integrity of this now unique wooden storefront building while integrating an addition that did not overpower or take away from the more informal quality of the Aspen Times building,” says Rowland + Broughton Principal Sarah Broughton. 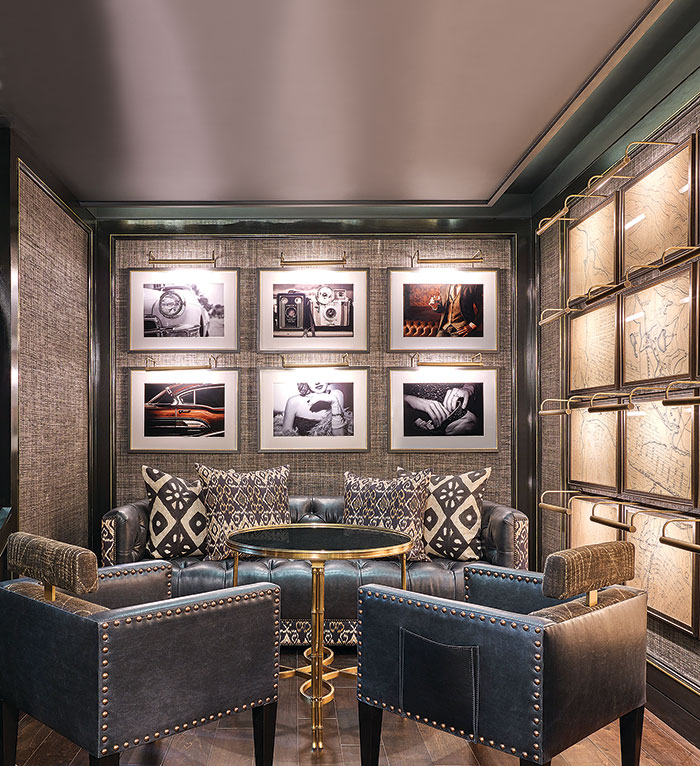 Bad Harriet was designed with contemporary elements that create a supremely comfortable and intimate hideaway.

One of the biggest challenges was removing the Times building from the site and then installing a foundation and steel superstructure to allow it to once again stand on its own, explains Broughton: “It was a surgical and high-structural achievement.” The result of their efforts is a rustic modern building that flows into the enhanced courtyard/community space. 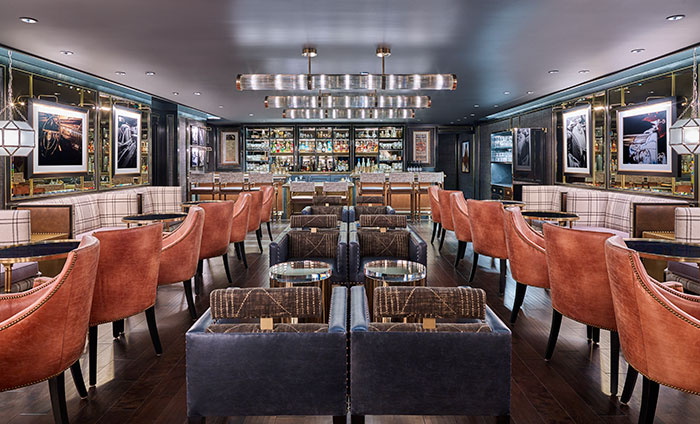 Bad Harriet provides a sophisticated addition to Aspen’s nightlife. It honors women from the past and present with craft cocktails named after trailblazing women.

Bad Harriet, a sassy new speakeasy located in the building’s basement, is named after the wife of original owner Jerome B. Wheeler. The underground bar is punctuated with well-edited contemporary design elements and complements the hotel’s legendary J-Bar—where Hunter S. Thompson once held court. 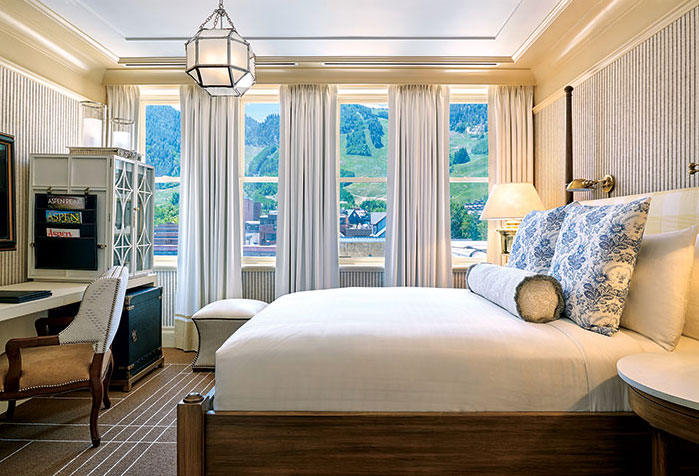 The view of Aspen “Ajax” Mountain from a bedroom in the new luxury suites.

The new three-story structure behind the Times building includes two 2,000-square-foot, three-bedroom, three-bathroom residential-style suites—each located on a private floor with balcony views facing Aspen “Ajax” Mountain. Todd-Avery Lenahan, principal of TAL Studio, oversaw the interior design, working to create a seamless extension of the Jerome experience. “For the suites, we explored the idea of design palettes that were more seasonally specific and visually celebrated each of the four distinct seasons that are enjoyed in Aspen,” Lenahan says. 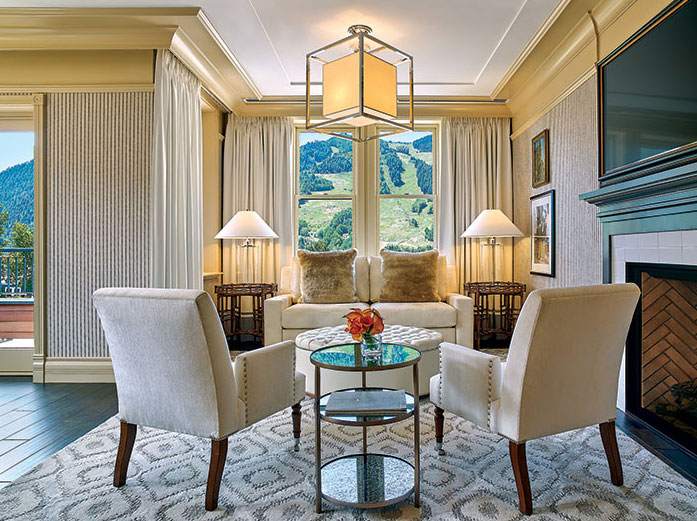 The new 2,000-square-foot suites were designed to create a seamless extension of the Jerome experience, celebrating the four seasons enjoyed in Aspen.

A new 734-square-foot meeting space was constructed on the ground level of the Times building and called the Dunaway Room after Bil Dunaway, who bought the Aspen Times in 1956. The space, holding up to 60 people, opens onto the newly revamped courtyard. 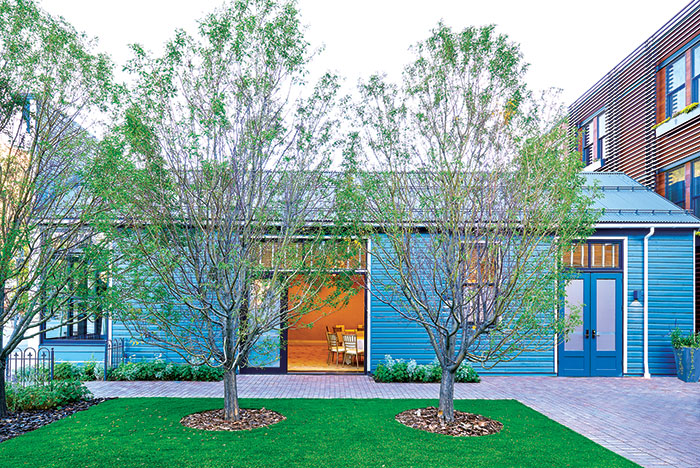 The new conference space, the Dunaway Room, seats up to 60 people and opens onto the new courtyard.

Outside, the courtyard, swimming pool and terrace invite guests to relax and enjoy the new surroundings. The garden between the Aspen Times building and hotel is open to visitors and hotel guests as they stroll in and out of the landscaped square accessible from Main Street. 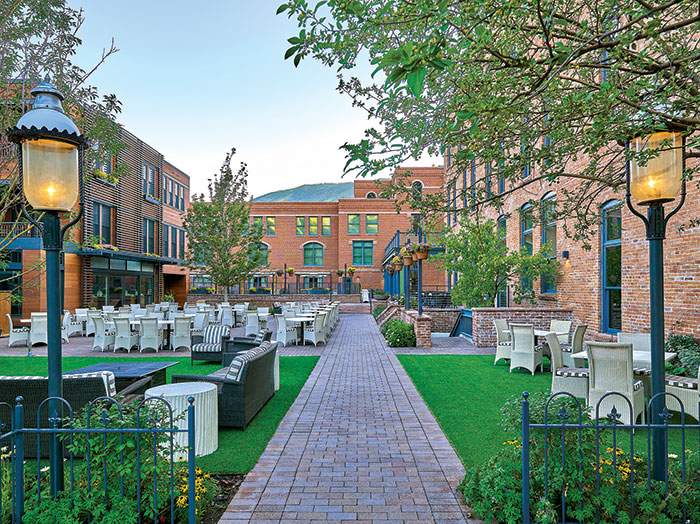 The outdoor space connecting the two buildings provides the perfect setting for intimate events and gatherings.

Tony DiLucia, general manager of the Hotel Jerome for a span of 30 years, is delighted with the expansion. “Seeing the hotel serve as the setting for countless milestones for generations of families is incredibly heartwarming,” he says. “Our new spaces are a welcomed and exciting addition to the place we all hold so dear.”