In 1928, Ernest Hemingway drove his yellow Tin Lizzie to Wyoming’s Bighorn mountains, intent on finishing his “monumental opus” as he called it, in peace and quiet—and also for some good trout fishing. His newborn son Patrick was colicky back in Arkansas, and Hemingway couldn’t hear himself think, let alone muster the concentration needed to finish his book. After arriving in Wyoming, he spent the next month at guest ranches in Sheridan and the mountains, finishing A Farewell to Arms.

This year, during the 90th anniversary of A Farewell to Arms, Wyoming organizations are hosting “Explore Hemingway: Along Wyoming Highways”—a statewide, multi-year initiative celebrating the life and writing of Ernest Hemingway, and exploring related historical and contemporary issues. 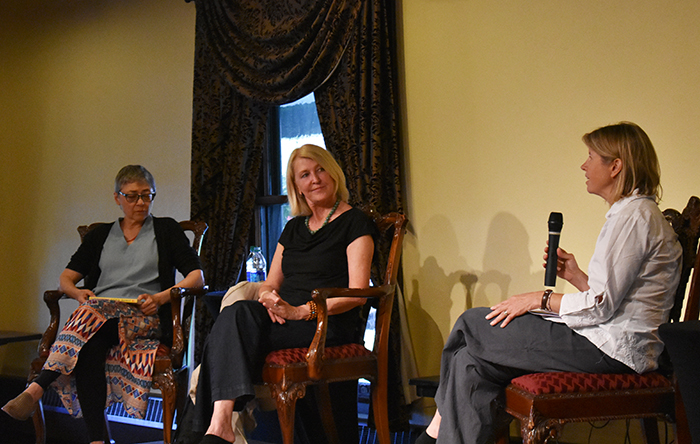 On August 30, I was honored to participate, reading from my forthcoming book, The Dignity of the Iceberg, One Woman’s Wyoming-to-Paris Search for Hemingway, with award-winning author Sigrid Nunez. Nunez has written seven novels and a memoir, and has won numerous awards; her novel, A Feather on the Breath of God was a finalist for the PEN/Hemingway Award for Debut Fiction. She read from her wonderful new book, The Friend.

Nunez was staying as a resident at the internationally recognized Ucross Foundation, an artist residency program for visual artists, writers, composers and choreographers working in all creative disciplines. Located on a ranch outside Sheridan, it has worked with the PEN/Hemingway Award since 1995, inviting winners and finalists to the ranch. Ucross is also an organizer of the “Explore Hemingway” celebration, along with Sheridan College who received a grant from the National Endowment for the Humanities Grant for events planned throughout 2018 and 2019.

Driven by Awe and Respect for Nature