A Brand Built Around a Beloved Vintage Ski Photo

In 1942, four women went skiing. The result? One of the most sought-after vintage ski photos 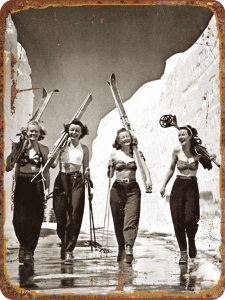 On a warm ski day, it’s common to see folks in unbuttoned shirts or perhaps sporting swimwear on the slopes. This trend is nothing new in the snowsport community. For over a century, Americans have enjoyed spring and summer skiing, oftentimes in minimal clothing. In 1942, a photograph captured four women approaching Mt. Lassen on July 4th in bikini tops with skis slung over their shoulders. Despite the significant amount of snow packed around them, the sun was shining as they cheerfully approached the base. For entrepreneur Wayne Cimperman, this vintage photograph became the basis for his company Girls Gone Skiing.

Having grown up in South Jersey, Cimperman’s passion for skiing is surprising. “There was one ski run nearby with a single lift,” Cimperman recalls. “After school, I would go up and down that hill, doing my homework on the chairlift between runs.” When he graduated high school in 1984, Cimperman packed up his car to move west to Lake Tahoe. On the long drive from South Jersey, Cimperman stopped in different cities to sell a product he’d created, the Ski Lift. This gadget was made using an old seatbelt webbing and a sewing machine with the intent of making skis easier to haul from the parking lot to the lift. Despite only earning enough to pay the road tolls during his trek west, Cimperman remained passionate about starting a business. He sold his car for extra cash to buy more materials, and soon after, the product took off. 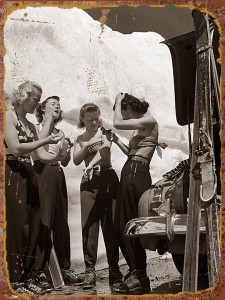 When the summertime hit the States, the lull in Cimpermans Ski Lift business was inevitable. “I didn’t want my company to depend on the season,” he explains. “So, I expanded into novelties and decor.” And in response, Girls Gone Skiing was born.

The vintage photo captures a moment in time for four girls with a passion for skiing. From left to right, the women featured are Tora Anderson, Barbara Germain, Loretta Bertoli and Bettie Johnson. There were record snowstorms in 1942, and roads were closed across Northern California for most of the season. The Fourth of July was the first day the road opened, and the friends were all smiles.

In 2005, Cimperman did his due diligence to find the photograph’s owner. He tracked down one of the original members and was in contact with her granddaughter. “My grandmother was tickled to death,” she said when Cimperman approached her regarding the image. Excitedly, her grandmother signed off on Cimperman’s plan to create the brand around her and her three friends.

“It’s an iconic image that seems to suit any mountain home,” says Cimperman. With many other vintage images now sold by the Girls Gone Skiing brand, the owner sees firsthand how the skiers of today pay homage to the roots of the sport.

A Teddy Bear-Like Chair From Hygge Life in Avon