Get to Know Artist Kevin Box

BEST KNOWN FOR: Intricately folded paper forms cast in bronze, aluminum or stainless steel, then finished to recapture the look and lightness of paper.

INSPIRATION: “I used to be a printmaker and before that I was into making paper, so I’ve always had a relationship with paper. I gave up a very successful career in graphic design when I realized I was making landfill trash for a living. I wanted to make something more durable.

In college, I took a fine art printmaking class. I was doing etchings and monotypes, and I loved the etching process. But I started cutting holes in the plate so I could get the pure white paper to come through. I was frustrated with the idea that when you make a mark on paper, you’re just making a shadow on the light. I kept thinking, ‘It’s perfect. I don’t need to do anything to it,’ but that whole blank canvas thing had already been done—and I did have more of a story to tell.

I thought, ‘Why not let the paper itself tell the story?’ So I just did away with the plate altogether. I sat there and started creasing the paper and letting the lines tell the story.” 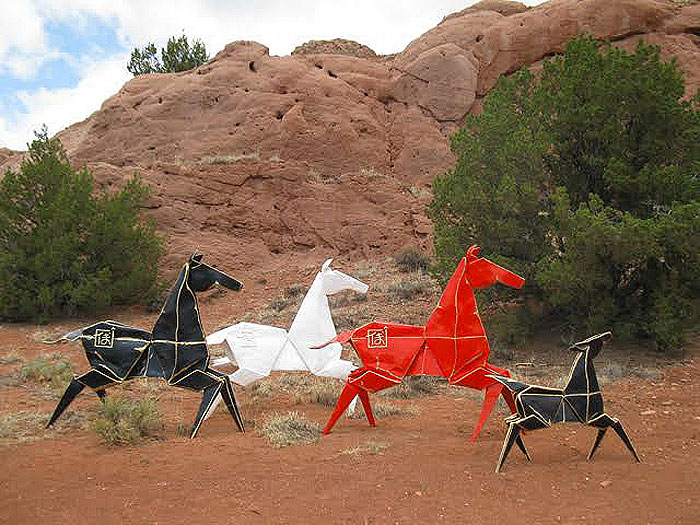 FROM PAPER TO METAL: “After I graduated, I worked at fine art foundries casting bronze sculptures for other artists. It was pretty awful, brutal work, but I discovered that bronze is like printmaking in 3D. The artist would make an original, we’d make a mold or a “master,” and then we’d make copies. I started thinking, ‘If I’m going to do something with this material that’s been around for thousands of years, I really need to do something different.’

A mentor taught me the method of organic burnout casting, or direct casting, in which you can cast anything that will burn in bronze. Many people use sticks and twigs, but I thought, ‘Why not paper?’ I practiced for years with paper and wax, and I developed a technique of capturing all the detail that was in the paper in bronze. I thought, ‘If Rodin’s thumbprint could be captured in one of his castings, then I should be able to capture a watermark in paper.’” 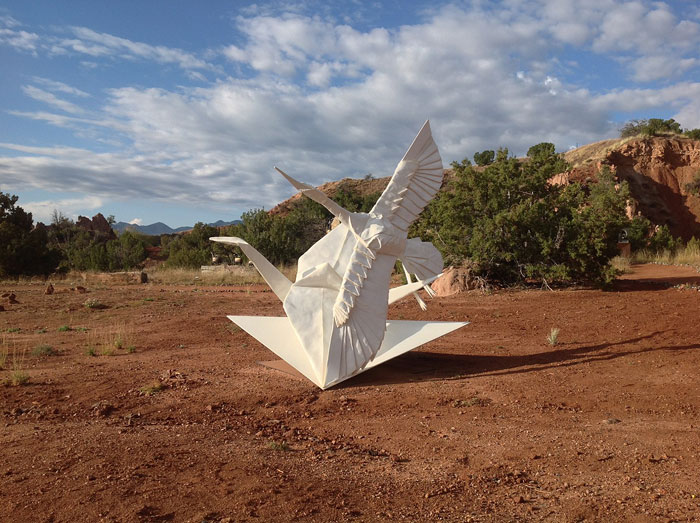 ["Flight of Folds" by Kevin Box and Robert J. Lang]

A LIGHT TOUCH: “Most bronzes are brown or black or green. They look like they weigh a thousand pounds and they do. I wanted to make this metal look light. Not just light in weight, but light in spirit.

Traditionally, molten bronze is poured into a ceramic shell that, like a porcelain dinner plate, turns white when you fire it. So I thought, if I want the bronze to look white, I’ll just burn the ceramic back onto it like a patina. So I made a solution using the ceramic, heated up the bronze and applied a thin layer of solution, and it looked like it was white again. And all my colleagues said, ‘You’re ruining the bronze; you’re hiding it!’ To this day, there are artists who rag on my work because they think I’ve done such an awful thing.”

So I folded a few things successfully, and I thought there was something interesting a few steps back in the process. I unfolded a crane and discovered this geometric design that represented all the work I had been doing. It was like the ‘Aha!’ moment. For me, the origami form is a metaphor for who we are on the outside. You unfold it and in all those crease patterns you can see all the designs that are going on in our lives beneath the surface; all the thoughts and choices being made. That’s the story that’s important in my work.” 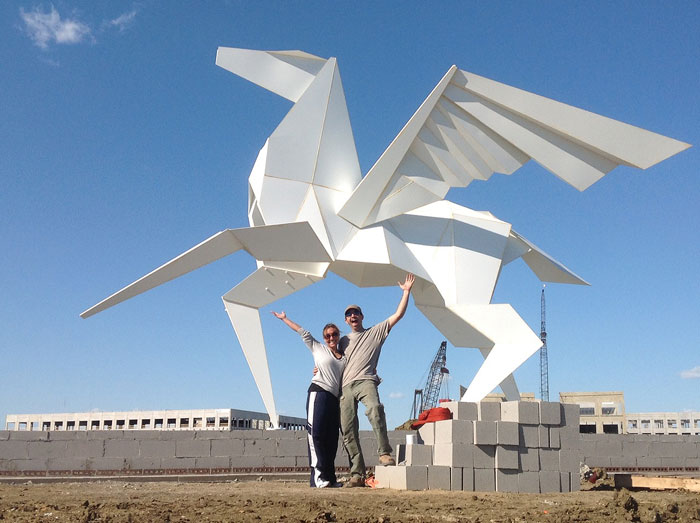 A COLLABORATIVE APPROACH “Sometimes I’ll have an idea that’s far too complicated for me to learn how to fold. Remember, I just learned about origami like, 15 years ago. I’d heard about this guy, Robert J. Lang [featured in the movie Between the Folds], who’s a doctor of physics from CalTech and a mathematician, but he’s also a master origami folder. So I called him up and asked if he’d be interested in a collaboration. He said yes, and so now I collaborate with the world’s most famous origami artist.

I’ll have an idea, and Robert will often have a base model in his archive that we begin with—a basic square folded into all the different points that you need to make a particular animal. Sometimes he’ll fold it more, and sometimes I fold it more, but we work together in finishing and manipulating the piece into its final form. That’s where the essence of the animal is going to either come alive or it’s just going to look like a cold steel thing.” 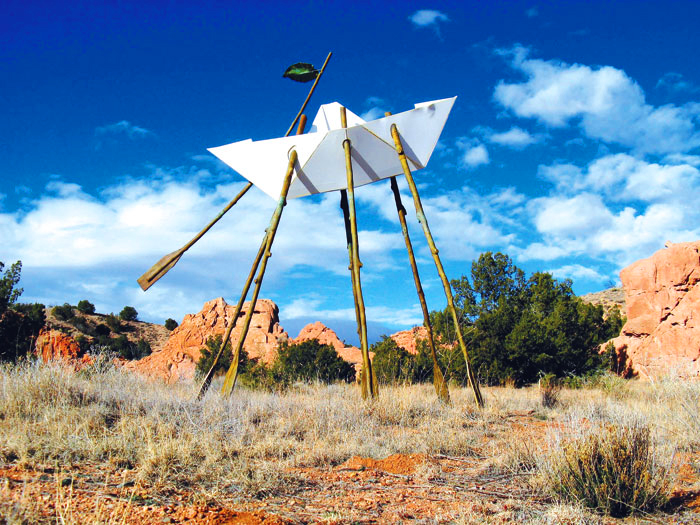 ABOUT LIGHT BOAT I grew up with boats. My grandpa had so many boats that he stopped naming them and started lettering them. I bought the ‘G’ boat from him for $2; it’s a little ski boat he bought to take my brother and me skiing when we were kids. In 2006, I moved to New Mexico and I tried to look up all the lakes where I could take the boat, but there are no lakes. So I sold the boat and it was like this sort of giant sucking sound. I was like a fish out of water.

Somebody had given me a paper boat and it sat on my desk for five years. I thought it was such a great archetype, and I thought, ‘How do I make it my own?’ It sat around for years until I moved to New Mexico. And within a year, I ended up building ‘Light Boat,’ my version of the boat. It’s sort of like a desert boat. It’s a sailboat on these giant stilts or oars, but it’s suspended in the air. There’s no water anywhere near it. Sure, it certainly has seen water, but it’s waiting. It’s ready for adventure and it certainly has seen adventure, but it’s in a pause kind of period.

THE BIG PICTURE I hope that when people see my work, they want to know more. I’m competing with iPads and iPhones and TVs and all the noise in the world. And what I hope is that amidst all the noise, someone who may come into contact with one of my pieces suddenly finds themselves peacefully paused for a moment; that in the artwork, they can maybe travel down a road of discovery and find something inspiring that ultimately helps them continue on their journey and make better choices.

An artist once told me, ‘Kevin, if your artwork isn’t changing consciousness, then you’re just making decorative crap.’ And I was like, ‘My God, you’re right!’”

WHAT’S NEXT Origami in the Garden, a touring exhibition featuring Box’s compositions and collaborations with other origami artists, on view at public gardens throughout North America. See it at the Turquoise Trail Sculpture Garden in Cerrillos, NM, through October. More at origamiinthegarden.com. You can also view Box’s work at RARE Gallery of Fine Art in Jackson, WY, raregalleryjacksonhole.com.