For The Cowboy At Heart

Since high school, Mike Roths has loved two things: oil painting and woodworking. While he began his career as a painter, he switched to making furniture after discovering “the ‘starving artist’ thing was real.” Though Roths may be half joking, it makes a great story—and his furniture is all about telling tales too.

Driven by his love of the Old West, Mike and his wife Jo moved from Iowa to Missoula, Montana, in 1979, where he began working at a luxury cabinet shop. Three years later Roths opened his own business, Bear Paw Furniture. His work has always been informed by his fascination with the Old West: ghost towns and gunfighters, fly-fishing and campfires. Roths captures these motifs to create one-of-a-kind pieces that pay tribute to iconic Western life. 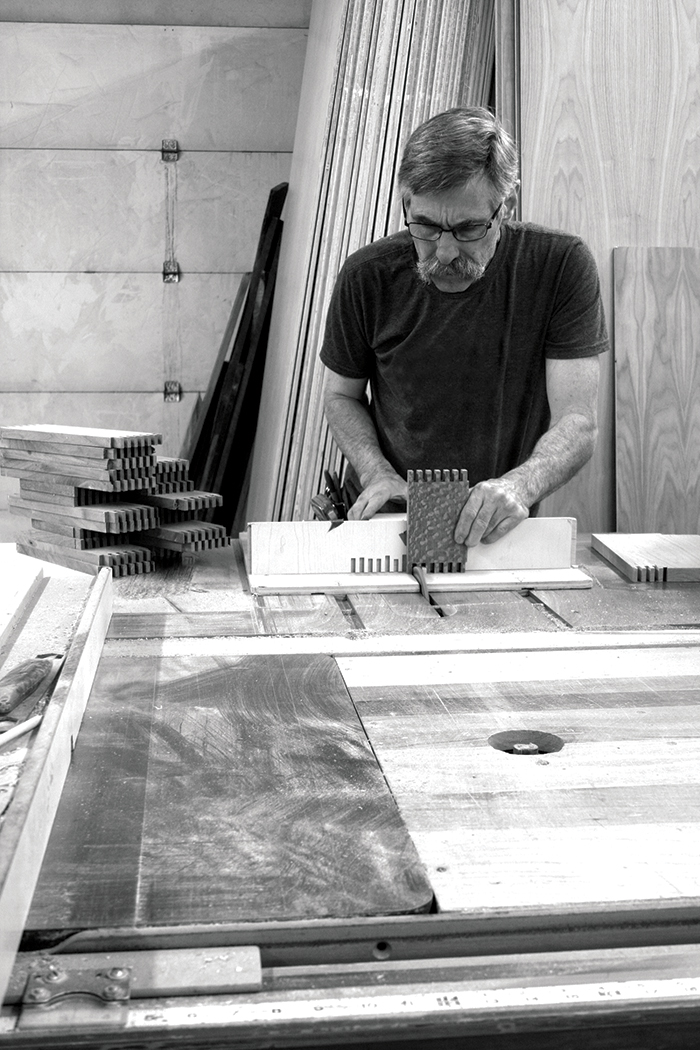 At work in his shop, Roths uses traditional joinery techniques that make every piece of furniture a testament to the craft of woodworking

His handcrafted tables, chests, bars and other furniture are rustic, often whimsical creations that reference history in ingenious ways, incorporating items such as antique fishing lures and bobbers, reclaimed barnwood, Winchester ammunition boxes and even barbed wire. “I like to think of my furniture as pieces that tell a story of the historic West,” Roths says. 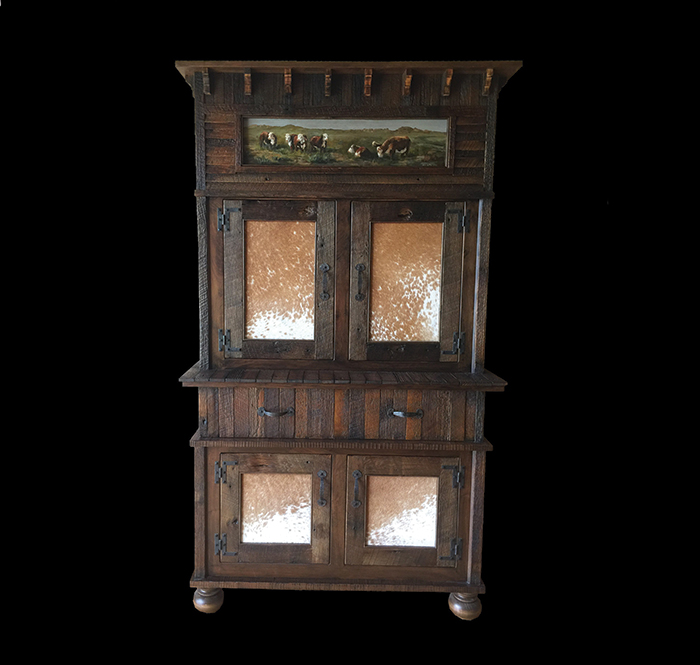 Round ’Em Up is a reclaimed barnwood back bar featuring an original oil painting by Roths. The artwork, which pictures grazing cattle, illustrates how each Roths piece is unique.

It’s the natural splendor of the landscape, however, that truly inspires Roths and translates to his furniture. He highlights the beauty of wood, choosing hardwoods like black walnut that feature deep color, rich grain and interesting imperfections like whorls and holes. His woodworking skills—he uses dovetail mortise-and-tenon joinery—also ensure that his pieces will survive generations. 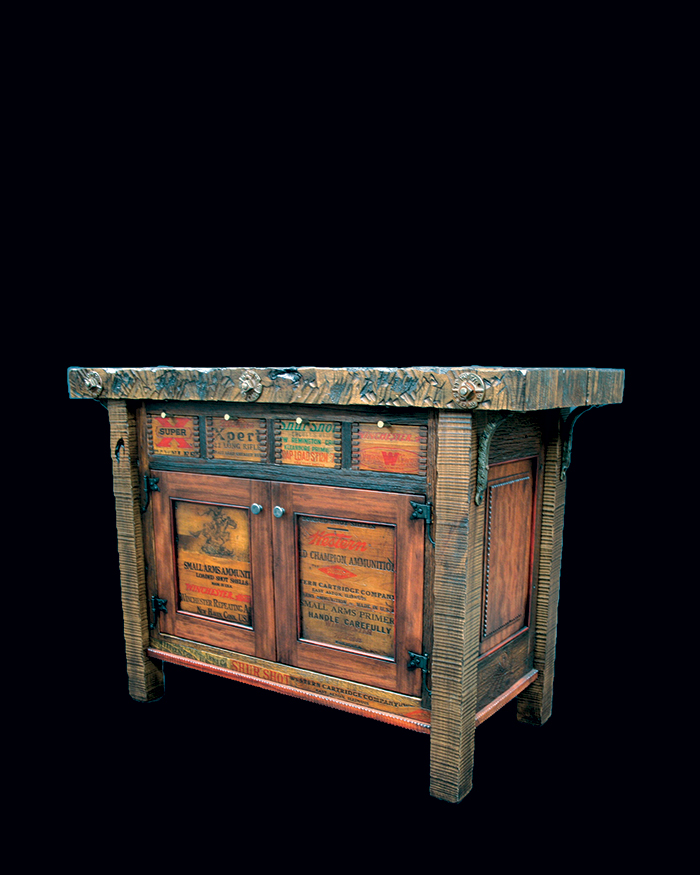 The Lock and Loaded sideboard with vintage ammunition box panels 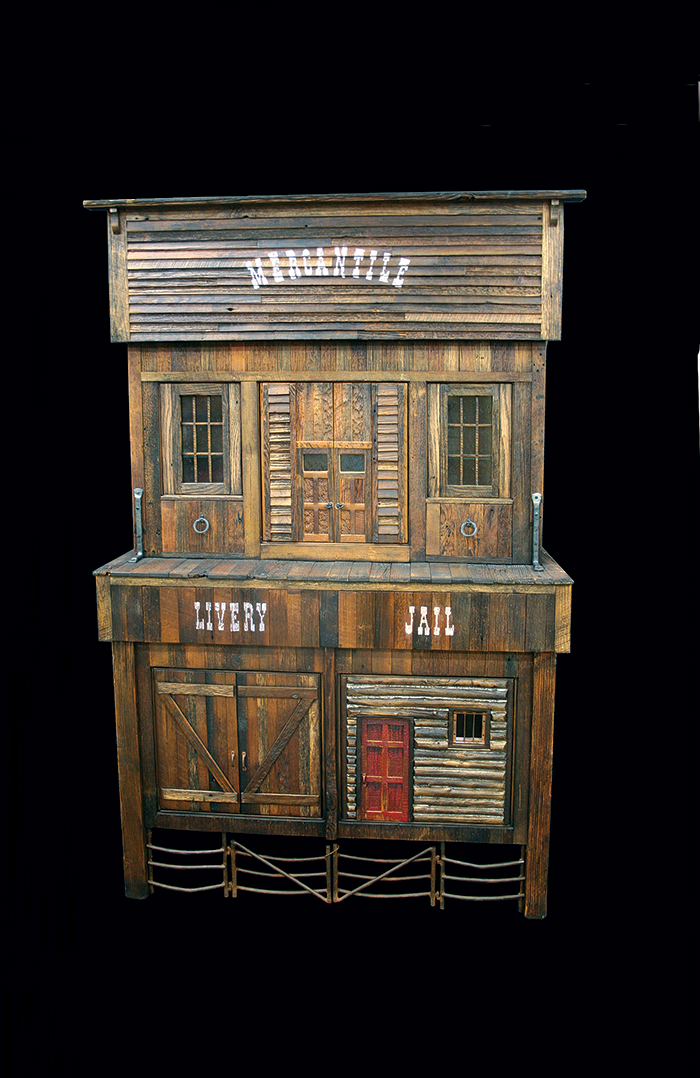 Another impressive barnwood back bar, Mercantile mimics the false-front buildings seen throughout the Old West, including town staples like the livery and jail

It’s no accident that Roths and his family now reside in Stevensville, a town steeped in frontier history. Originally a Jesuit settlement, it was the first permanent community in Montana. The rebuilt log-cabin chapel of St. Mary’s Mission still stands in town. Stevensville is also notable for its location just east of the Bitterroot Mountain Range, an impressively long section of the Rocky Mountains that posed a big problem for Lewis and Clark.

Roths will be making his way from Montana to Wyoming this September for the Western Design Exhibit and Sale in Jackson, a show of functional art that captures the spirit of the West. This “way to show art in furniture form,” as Roths puts it, is what drove him to start participating in 2003. Since then, his work has won four awards, including Best Artist in the Historical Craftsmanship category, which may be the best compliment to his work. He is, after all, creating “fine Western furniture for the cowboy at heart.”