Cozy and Repurposed in Yellowstone Country

“The most important thing for us was that our house fit the land,” Lauren Harris says of the two-bedroom residence she and husband Anthony Eaton planned to build on Tall Pony Ranch, their 300-acre property along a tributary of the Yellowstone River, just south of Livingston, Montana. “We wanted what we built to enhance the historical aspect of the setting, not take away from it.”

With that goal in mind, they hired local architect Candace Tillotson-Miller, principal of Miller Architects in Livingston, who specializes in procuring old homesteads, barns and other buildings from the area and repurposing the materials into new structures that echo the regional vernacular. Such materials, the architect explains, “blend beautifully with the landscape around here, and that idea resonated with Lauren and Tony.”

The project’s first two finds were a pair of century-old hand-hewn log cabins. Materials from the larger one were used to construct the new house’s living room, while the smaller one became the guest suite. “We numbered the buildings piece by piece, took them apart, and then reconstructed them on-site,” Harris says. Although the rest of the house is technically new construction, it was executed with locally sourced materials, many of which are recycled.

The owners and architect did make room for a few departures from classic Montana style, however. Harris, who lived in France for many years, wanted to include French Country touches, expressed through richly tinted plaster walls, beamed ceilings, patterned fabrics from Provence and select antique furniture.

Through such sensitive blending of old and new, the house is far more than a historical artifact. “What we’ve created,” says Miller, “is a comfortable, welcoming nest that reflects the personality not just of its place but also of its owners.” 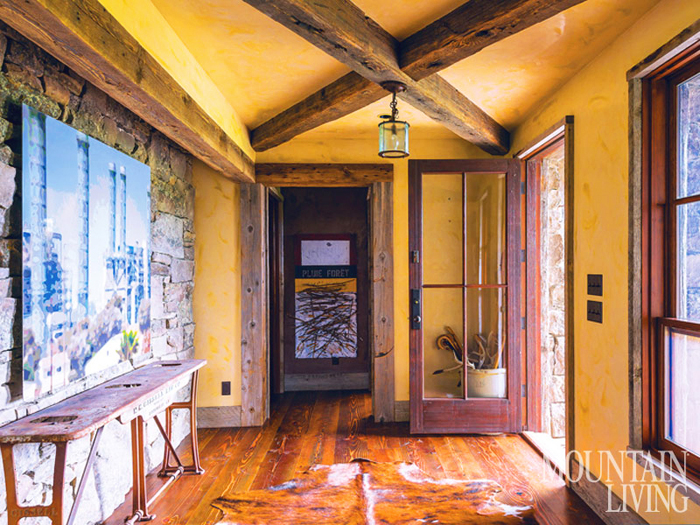 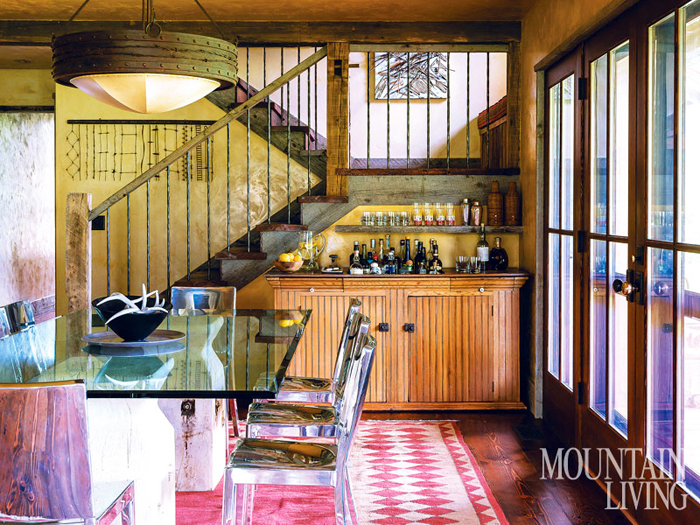 A staircase with balusters by local wrought-iron artist Kevin Warren provides a striking backdrop for the dining room, which features a glass-topped table designed by homeowner Lauren Harris. The wet bar was once an antique ranch sink, found in Bozeman. 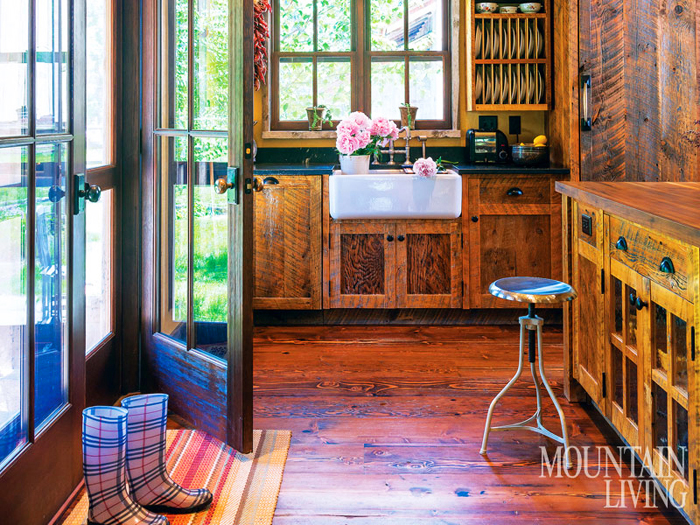 Old galvanized-steel roadside billboards (dotted with bullet holes) cover sections of the kitchen wall. The kitchen cabinetry and facings for the refrigerator and dishwasher show the marks of the circular saws with which they were cut from old barn wood. Here, as throughout the house, the floors are antique local fir. The island's walnut counter is the only new wood in the room. French doors open to a kitchen garden designed by landscape architect Linda Iverson.

In the guest suite, built from materials reclaimed from an old cabin, French doors lead to a porch. 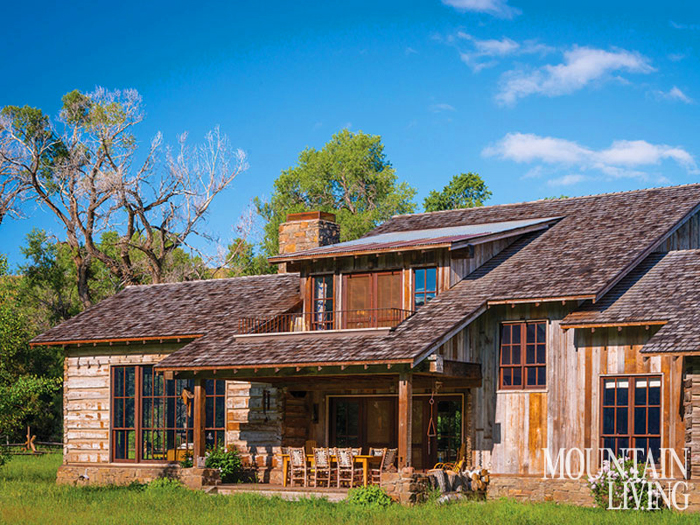 Another porch extends off the dining room. 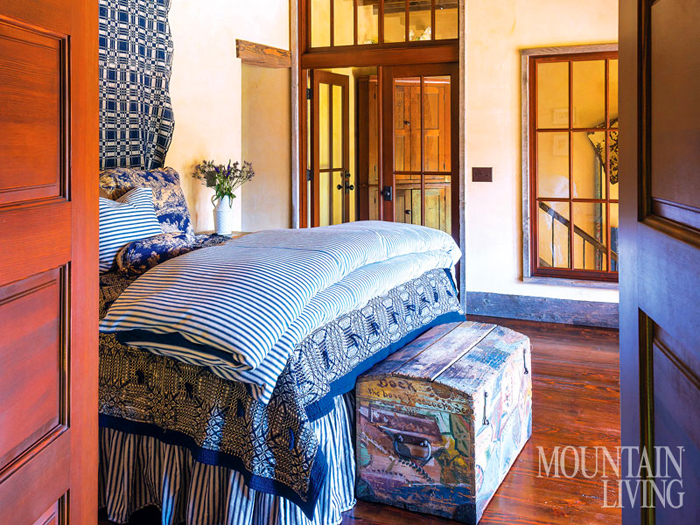 Viewed from its interior balcony overlooking the living room, the master suite is accessed via French doors at the top of the staircase. 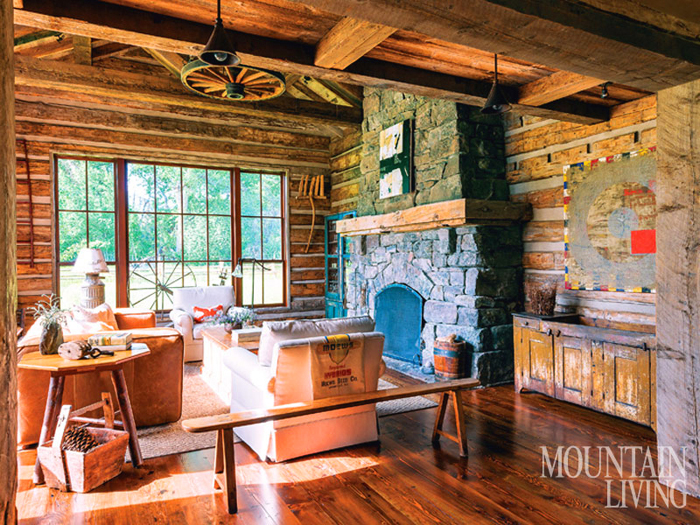 The living room was built from materials reclaimed from an old cabin. Notches in a log to the right of the chimney one supported joists for the original structure's second floor. "They help give the space character," the architect says. So do myriad other details, including early-19th-century benches and an old flour sack draped over a chair. The living room's wagon-wheel chandelier once hung in Livingston's old Long Branch Saloon. Its vintage screw-in incandescent Edison bulbs were props used in the 1992 Montana-set film A River Runs Through It. 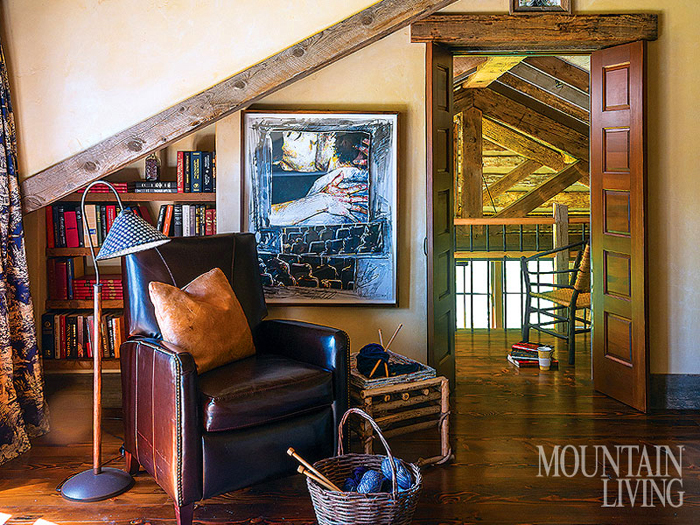 An armchair and built-in bookshelves under the eaves form a reading niche in the master bedroom. 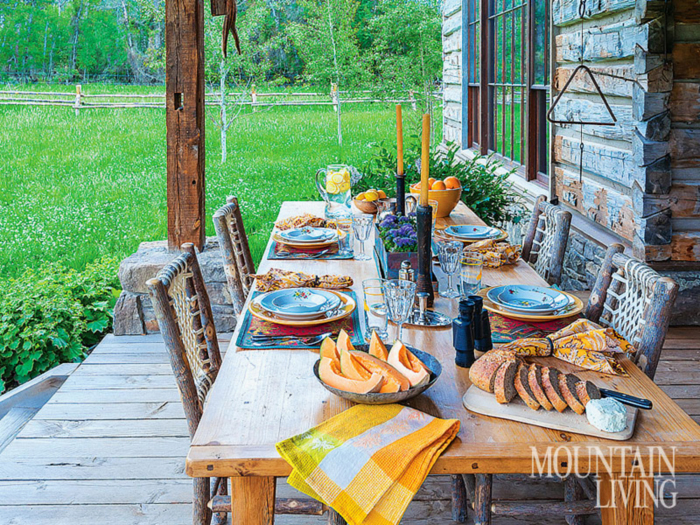 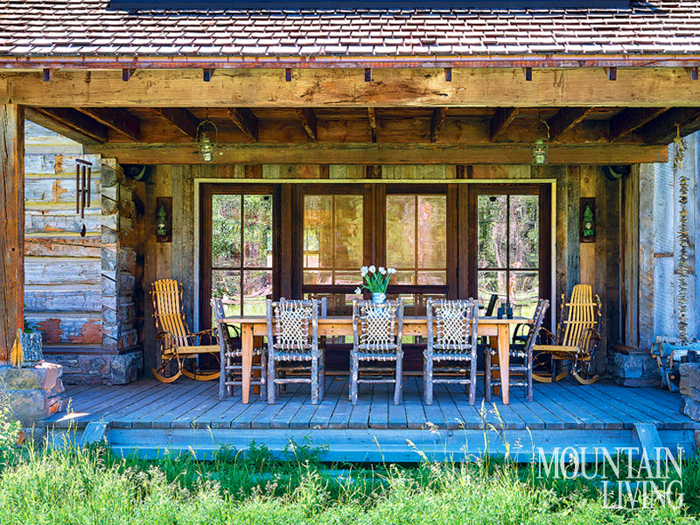 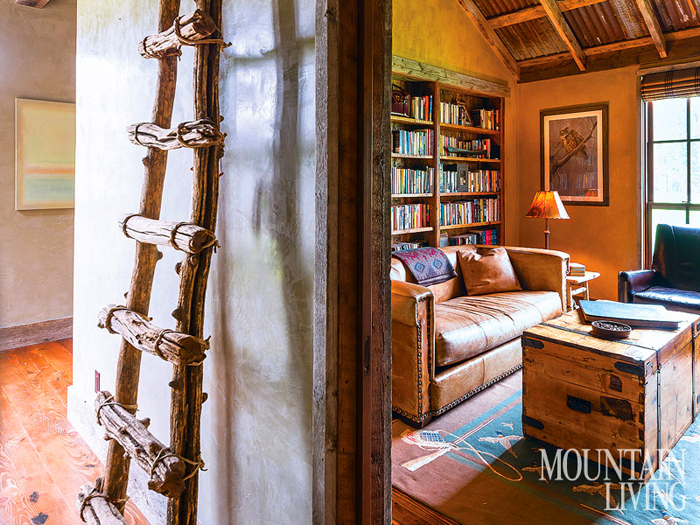