This is a story that nearly didn’t happen.

“My wife kept saying no…no…no to the house,” says the homeowner with a wide grin. His wife responds that she was actually not saying “no” to the house but to the concept of having a second home—even in a beautiful place like Jackson Hole, Wyoming—because it would anchor the family to a single place when “there is a big world out there to explore.”

In the end, the house won.

“The more I looked at it, the more I had to admit that the house was incredible and would be the perfect place to build some great family memories,” she says. “What can I say? It stole my heart.”

“What can I say? The house stole my heart. ” — the Homeowner

The homeowners were not strangers to Jackson Hole, having vacationed here—summer and winter—for more than 15 years. About eight years ago, they cautiously started considering the possibility of buying a home. The log-and-stone home they ultimately chose is stunning but required major changes to work for their family. “The original design had many small and dark rooms,” says the homeowner, who wanted a more open plan that would provide for group activities as well as private spaces—for both parents and teenagers.

“The existing house was soundly built and had a lot of character,” Berlin says. “The goal was to make it function for their family.” To that end, Berlin collaborated with the homeowners to create a family room, a media room and game area, an octagonal office and a new “friends-and-family” entrance. “The formal entrance and parking area for guests were a little remote, so we created, in essence, an inviting, extensively landscaped ‘back door’ to the home,” he explains.

Berlin says one of his biggest challenges was making the additions look like they had always been part of the home—repeating some of the form and shape of the existing house but making it unique to the owners’ wishes. And, naturally, sourcing the same Montana fieldstone and native fir that were used in the original construction.

Builder Randell Mayers (he built the original house with Turner/Boaz Architecture in 2001) agrees. “The big challenge was sourcing the same materials we used 15 years ago, then texturing and antiquing them to match what was there.” Mayers notes that some of the craftspeople who worked on the original home came back to work on the remodel.

In the meantime, interior designer Jacque Jenkins-Stireman started working with the homeowners on furniture, artwork and, most important, lighting. She designed all the lighting fixtures in the house, which were then fabricated by Winona, the homeowners’ Minnesota-based lighting company.

The homeowners wanted a “sophisticated but classic Western” look—something completely different from their primary residence (in Georgia), which they describe as traditionally Southern. Jenkins-Stireman accomplished this by using natural materials—leather, wood, stone, ironwork—that would have been used in the American West throughout the 19th and 20th centuries. “It is a must to have original old material…reclaimed material…pieces found in antique shops, flea markets and inherited pieces,” she says. She also designed and created custom pieces (her company has a custom case-goods division) that look like antiques but with modern functions. “This is a house that gets lived in,” she adds.

The homeowners continue to be glad that, in the end, the house won. “Every time we walk in…oh, my gosh… we feel so much at home,” says the homeowner. “This is a special sanctuary—summer and winter.” 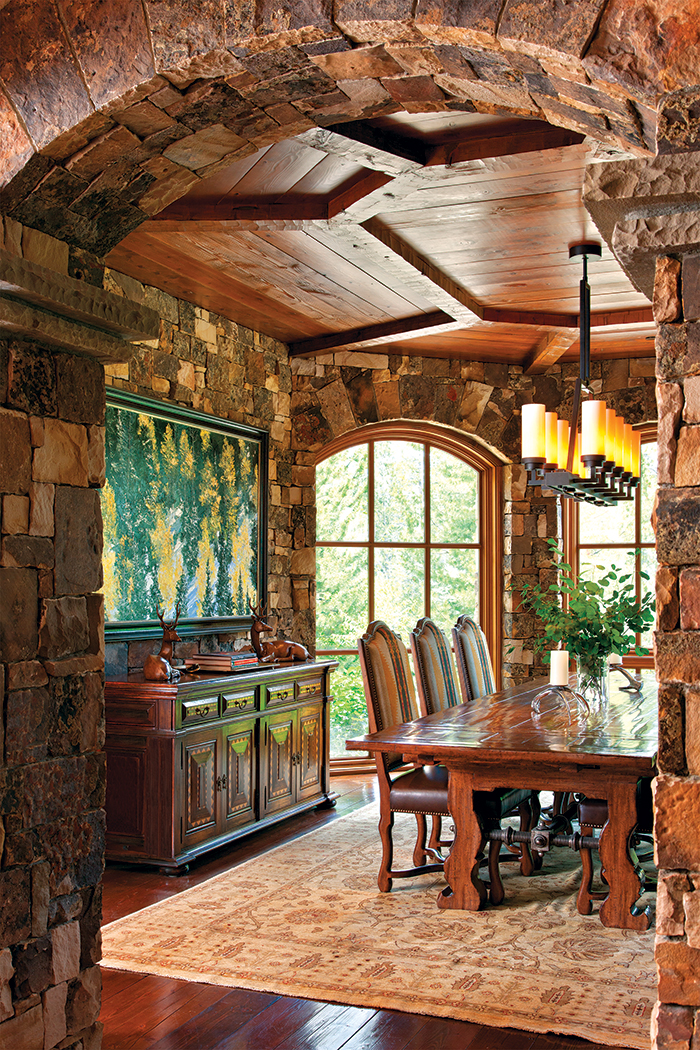 The mellow warmth of the dining room’s wooden ceiling gives the room an arts-and-crafts look; the straight edges are softened by a cathedral candle-inspired light fixture. 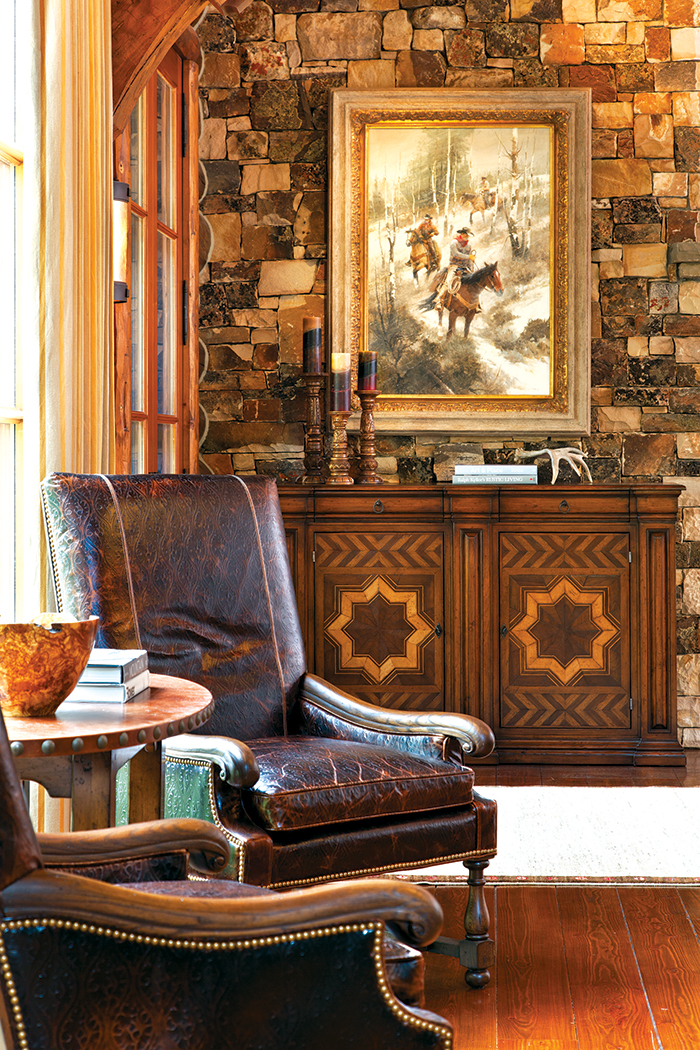 Two leather chairs—modern but with an aged-leather patina—form an intimate sitting area. The painting, one of the homeowners’ favorites, captures the winter cold and “what it means being out here in the West.” 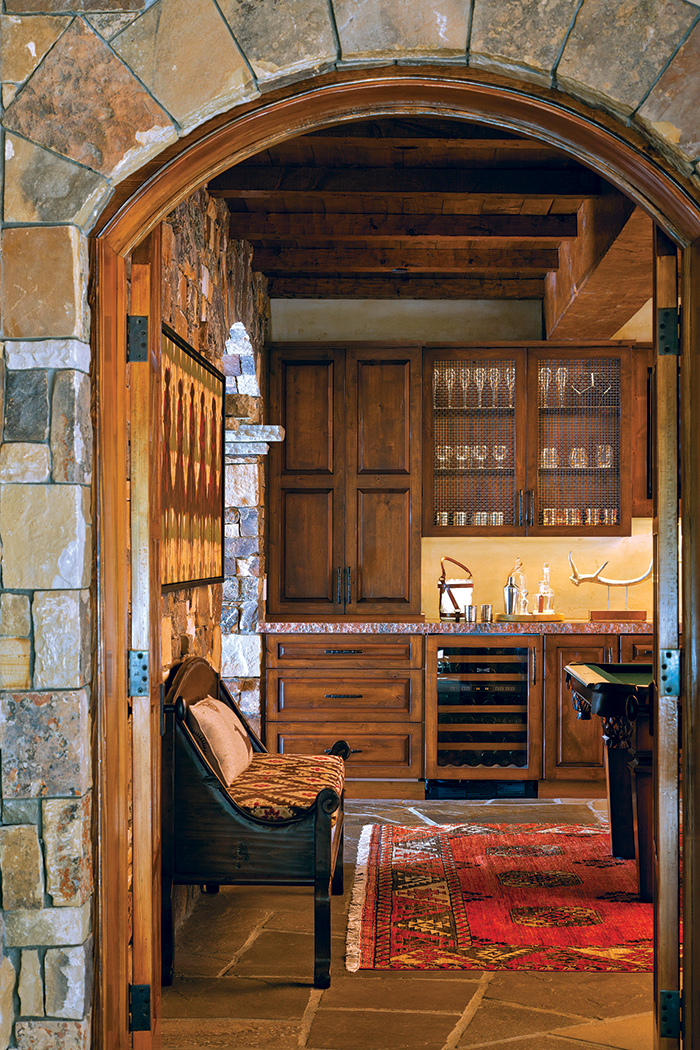 The arched stone entrance leads to the game-room bar. 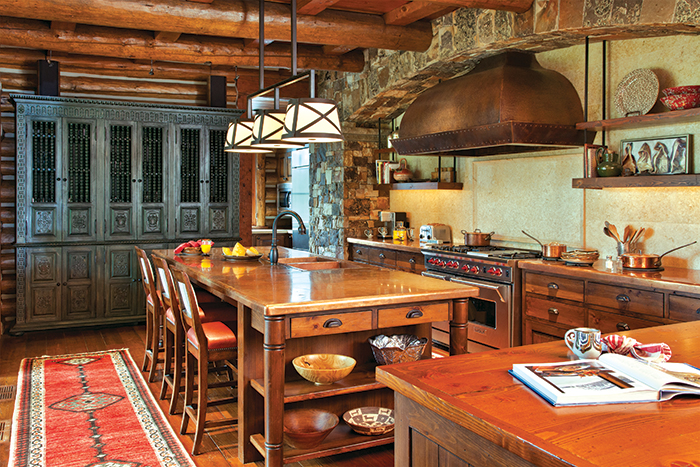 “The bones of the original kitchen were good,” says interior designer Jacque Jenkins-Stireman. “We updated the appliances and carried the copper countertops throughout
the space.” The homeowners have a large and much-used collection of copper cookware. Custom-designed lighting over the island was fabricated by Minnesota-based Winona Lighting. Dishes and linens are stored in the Spanish Colonial cupboard. 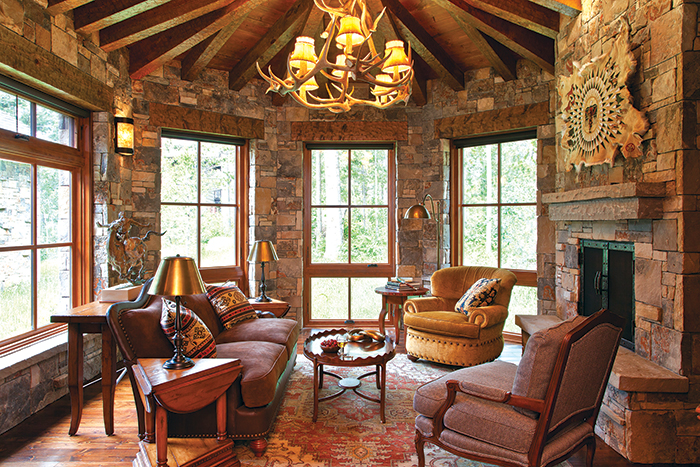 “The structure of the ‘cigar room’ has a tent-like feel,” says architect Larry Berlin. The well-ventilated room is a den and study. It serves, only occasionally, as a cigar room “when I’m alone in the house,” says the homeowner. 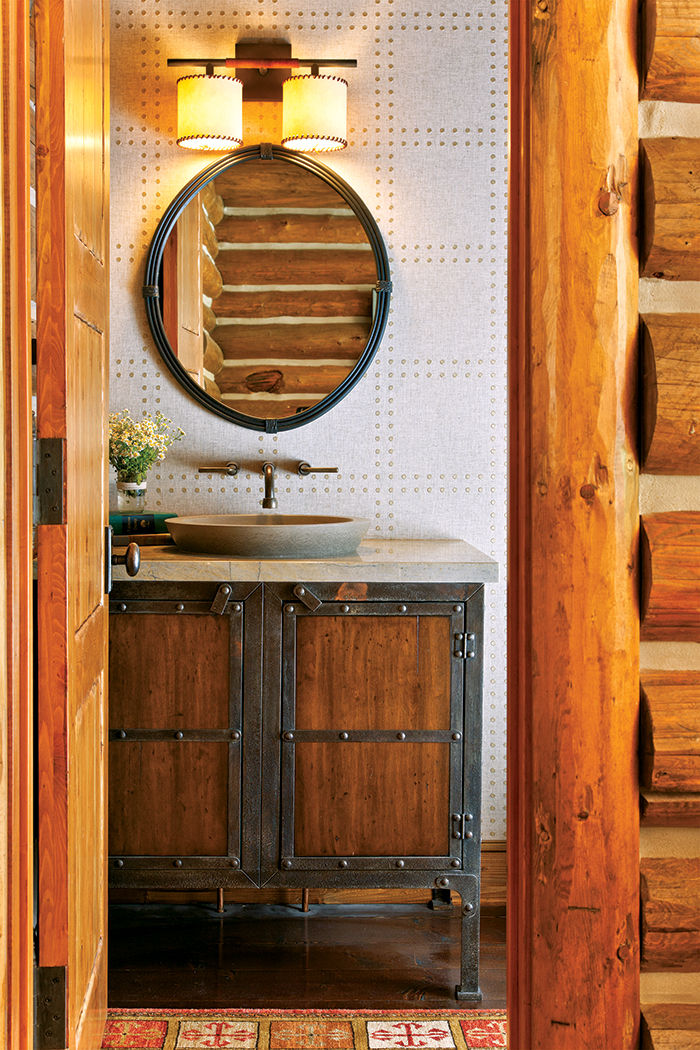 The sink sits in a specially designed piece that takes its cue from the strongbox safes used back in stagecoach days. 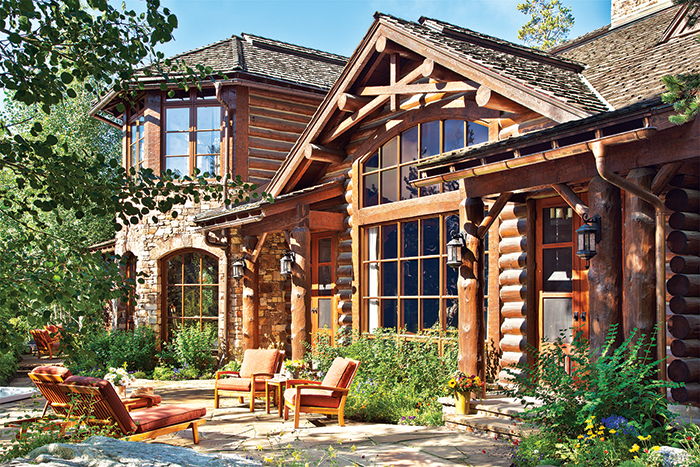 The newly added patio is a perfect place to enjoy the early morning quiet. “You can sit here and there can be moose, deer, fox…you name it,” says the homeowner.