Clean and Contemporary in Big Sky 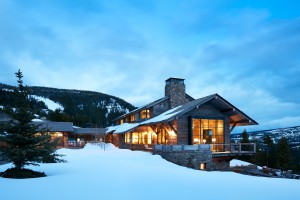 Perched on a hillside property between Cedar Mountain and a beloved neighboring ski resort outside of Big Sky, Montana, the reclaimed timber-and-fieldstone abode that architect Larry Pearson designed for a cosmopolitan couple effortlessly blends into the picturesque landscape while speaking in a decidedly modern vernacular that appeals to his clients’ sensibilities.

“They wanted something that was clean and contemporary with a Western overlay,” Pearson explains, pointing to the L-shaped home’s large gridded black steel windows and simple detailing. “We used rich materials in a modern, minimalist way. Everything is tight and very consistent.” 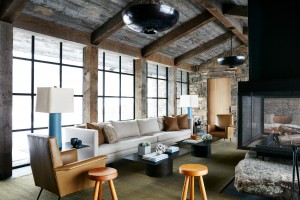 In the après-ski room, a plush custom sofa covered in Maharam fabric and a pair of vintage Italian club chairs recovered in luxurious Moore & Giles leather create a cozy spot to relax after a day on the slopes.

The outside corners, for example, come together in a modern take on a historic dovetail joint that feels almost like hand- crafted cabinetry—a detail that also elevates the interior’s reclaimed wood walls. “The outside becomes the inside and the inside becomes the outside, and that transition is distilled and very simple,” Pearson observes. 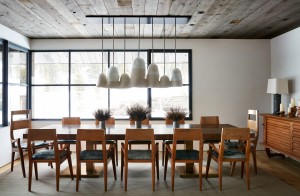 Evocative of the mountains just outside, a custom chandelier by Patrick Parish stylishly illuminates a long, linear double pedestal table by John Pomp and leather chairs from Dessin Fournir in the dining room. The credenza is by Guillerme et Chambron.

Involved from the get-go, interior designer Shawn Henderson riffed on the modern milieu, incorporating a mix of modern, custom and antique furnishings rendered in a neutral palette embellished with pops of color and loads of texture. “We worked hard to add elements that make the space feel warm,” he notes. 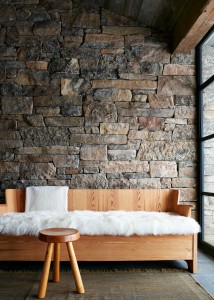 A bench with an alpaca-covered cushion creates a cozy spot to put on skis.

In the kitchen, for example, stained oak cabinetry blends in with the reclaimed wooden walls and hammered limestone countertops and backsplash. It’s flanked by the formal dining room on one side and the breakfast area on the other, each illuminated by woven chandeliers in the shape of mountain ranges—two of the many unique fixtures throughout the home. As Henderson says, “Lighting is an excuse to be a little more playful.” 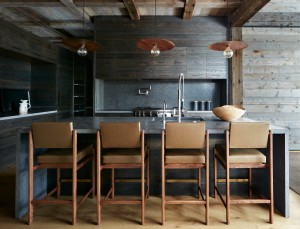 Pendants in a walnut finish from Dylan Design Company and counter stools from Thomas Hayes Studio complement the locally sourced wood-and-stone countertops in the kitchen.

Fabric also plays an important role. A woven cotton rug with a custom pattern inspired by the topography of the property anchors two distinct seating areas in the living room. In the one near the fireplace, a pair of matching sofas and twin barrel-back chairs covered in green linen surround a custom cocktail table sporting a wooden top with a live edge. “Custom handcrafted pieces have a warmth that lend themselves nicely to this type of space,” Henderson explains. 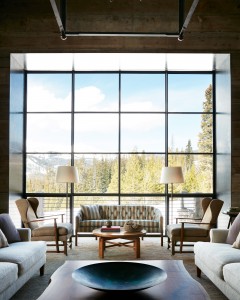 A diamond-tufted sofa covered in Zimmer + Rohde fabric defines one of two distinct seating areas in the living room.

A striped olive green and Mediterranean blue rug likewise creates a comfortable ambience in the après-ski room, where a long sofa in a chunky neutral fabric and a pair of leather occasional chairs create a spot to enjoy a post-ski drink in front of the fireplace, which has a rustic stone hearth and a steel firebox. Steps away, a wooden bench with a thick alpaca-covered cushion creates a sumptuous counterpoint to the fieldstone wall. 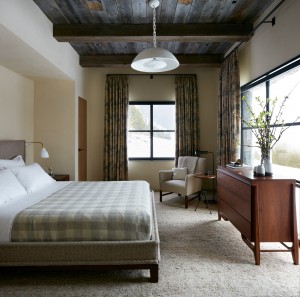 A ceiling fixture from trans-LUXE takes the guest suite in a more contemporary direction. Linen draperies with a floral print add visual interest.

While Henderson used draperies only sparingly in the main living spaces, they help to create a sense of warmth in the bedrooms, which also have plush area rugs and upholstered headboards. Textural sheers, for instance, add visual interest to the primary suite while filtering the natural light. “They create an extra layer of warmth,” he says. “We added a lot of visual interest with the colorations, patterns and textures.” Linen draperies with a printed floral motif likewise elevate one of the two main-level guest suites. 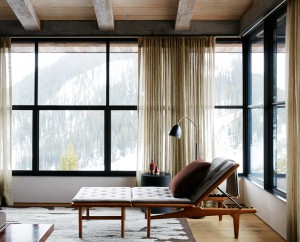 The chaise lounge by Hans J. Wegner invites relaxation in the primary bedroom.

When the two-and-a-half-year project was finally complete, Henderson installed all the furnishings and eagerly waited to hear from his clients, who arrived two weeks later, just in time to spend the holidays in their new abode. The family loved it so much that they spend months there at a time. It’s no surprise to Henderson, who describes it as one of his favorite projects. “For as beautiful as it is, the house has a very relaxed quality, and it hits all those notes of being warm and, most of all, very welcoming,” he says. “It feels really good to be here.” 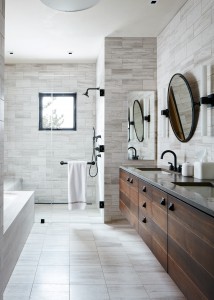 Mirrors from Waterworks accent the stone from Chelsea Arts Tile + Stone in the guest bathroom.

Good design takes time. From start to finish, the modern mountain ski chalet outside of Big Sky, Montana, took more than two years to complete, affording ample time for architect Larry Pearson and interior designer Shawn Henderson to imbue it with the sort of special, one-of-a-kind design moments for which they are known. For example, the walls are covered in a HAND-TROWELED TINTED PLASTER, a painstaking process that creates a warm visual texture that perfectly accents the reclaimed wood, rustic ceiling beams and fieldstone walls. “The artistry comes in the form of those types of details,” Pearson says, describing the result as “a jewel box.” The long timeline also allowed Henderson to DESIGN CUSTOM FURNISHINGS AND LIGHTING tailor-made for the interior. Examples include the live-edge cocktail table in the formal living room, the plaster chandelier in the main-level guest suite, and the metal pendants and complementary cocktail tables in the après-ski room. And once the lamps arrived, many from Europe, the designer had them rewired with silk cords, a small detail that makes all the difference. “The design is super intricate, and there are so many details,” he says. “You can’t rush a project like this.”