For a Bay Area investment professional who met his wife on a ski trip to Tahoe 18 years ago—and eventually had three children who also love to hit the slopes—a personal ski retreat was the ultimate aspiration.

“We had the vision of one day having a ski house where we could take our kids,” he says. “We spent time traveling all over the western U.S. sampling different areas with the idea of picking one for our family over the long term.” When the couple found a private three-acre lot at Montana’s Yellowstone Club that was perched at over 8,000 feet elevation and offered sweeping mountain views, they knew it was time to make their dream a reality. 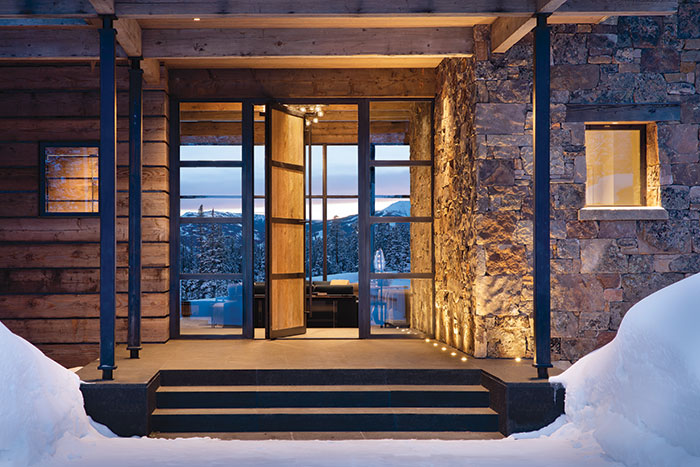 Throughout the house, architect Greg Dennee brought the outside in by using the same materials inside and out. At the entry, for example, he allowed the Montana moss rock on
the exterior to carry directly through to the interior.

To help them bring their vision to life, the homeowners enlisted Greg Dennee of Locati Architects, builder Rob McRae of Highline Partners and their go-to California interior designer, Kendall Wilkinson. The four-year collaborative effort resulted in an 11,000-square-foot mountain getaway that mixes modern touches with classic forms. “The clients really wanted the house to have roots in the traditional ski lodge aesthetic but have an unexpected contemporary feel,” says Dennee, who paired a time-honored gable roof design with less conventional floor-to-ceiling glass. “Modern doesn’t have to be severe; it can be comfortable. In this home, we were able to strike the balance between something that does feel overtly modern but still has a relaxed quality to it.” 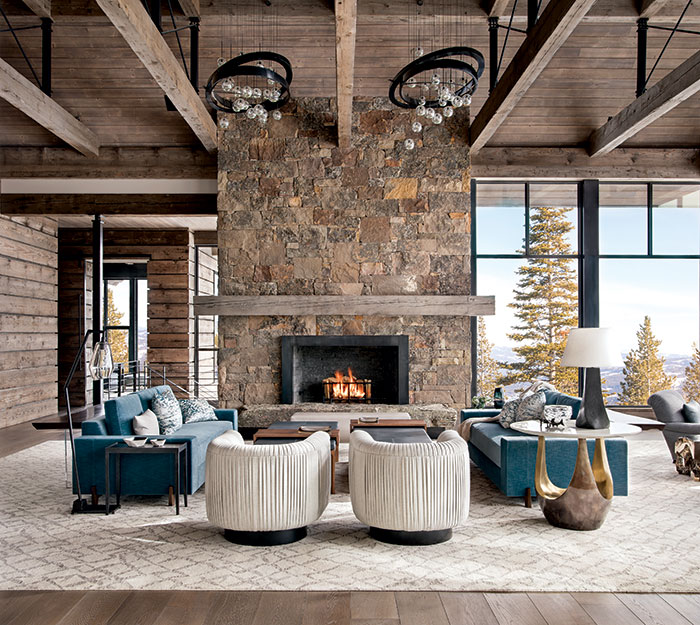 The mix of materials in the home also required a deft touch from the architect. Composed primarily of steel, stone and reclaimed timber, the house could have ended up feeling dark and heavy, but instead it’s cheerful and welcoming throughout. By exposing the steel trusses in the ceiling of the kitchen, family room and great room, for instance, Dennee created an airy effect as well as visual interest overhead. “You can wood a home to death,” he says, “and the homeowners were really sensitive to that. They wanted the home to feel light and bright.” 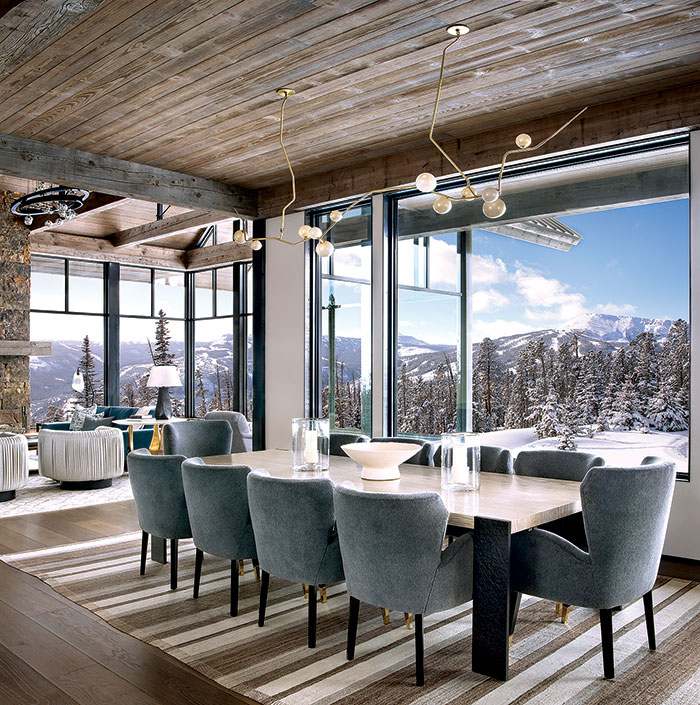 The dwelling’s most dramatic feature, however, is the corner-to-corner glass that lets in panoramic views of Montana’s famous sky, trees and Sphinx and Pioneer Mountains. For interior designer Wilkinson and her design principal, Kristin Rowell, those views were the driving force behind all of their design decisions. “When you have the kind of view they have, you want to bring the outdoors in,” says Wilkinson. To achieve that goal, the duo started with a neutral palette of grays and creams accented with pops of green and blue to honor the surrounding nature. The designers were also careful with the scale and proportion of furnishings and light fixtures, ensuring that nothing would distract from the picturesque scenes visible from every room. 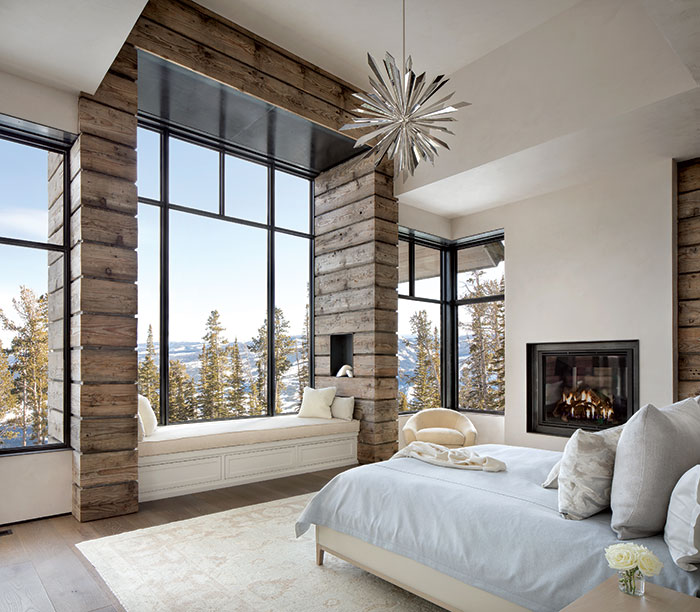 In the master bedroom, a light-reflecting chandelier illuminates a vintage rug and vintage tub chair. 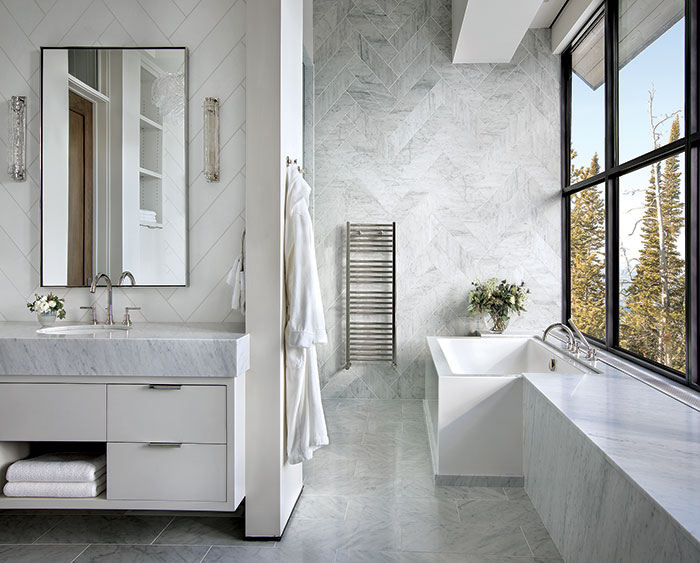 To maintain the cozy feeling of the home’s expansive spaces, Wilkinson and Rowell added layers of texture (think wool rugs, cotton pillows, velvet sofas and fur-covered stools) and finished with a little bit of luster. “Shine is really important, and I don’t think you should get shine in fabrics or too much in the furniture,” Wilkinson says. “The shine comes with the lighting.” The starting point for the designers’ decorative lighting choices were the custom chandeliers in the great room and family room. Designed by artisan Debra Weninger, a relative of the homeowners, the sculptural fixtures feature a series of handblown glass spheres that add the luminosity Wilkinson so appreciates. 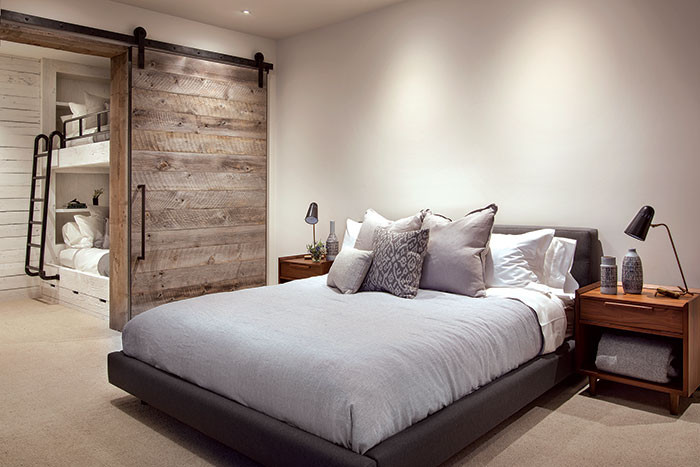 The home’s many sleeping quarters mean there is always room for guests.

The fact that the homeowners chose a family member to create such prominent pieces is rather appropriate for a house meant to be an all-season vacation spot for their children and them as well as their extended family. With seven bedrooms and the capacity to sleep up to 24 people, the home has room for friends and kin alike. “This is the dream for our family for decades to come,” says the homeowner. “It’s a place where we’ll always gather and come back to.” 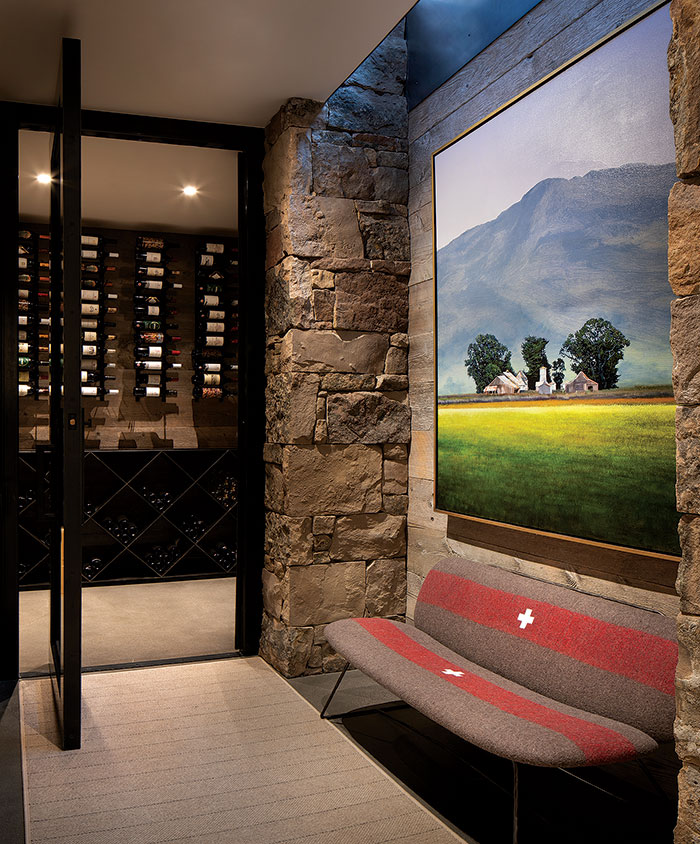 A bench upholstered in material from an authentic Swiss Army blanket perches outside the wine room.

A PLACE FOR ALL

“When you have a vacation home, there are a lot of guests in and out,” says interior designer Kendall Wilkinson. “These homeowners are very close to their extended family, so the idea was how to make it intimate for the five of them but also accommodate 20 people.”
USE SPACE WISELY In the kitchen, the design team opted for an L-shaped island, which allowed for extra seating when needed as well as additional cabinet space. PLAN FOR EXPANSION Multifunctional furnishings are critical when there’s a crowd. The dining room table, for example, has leaves for both ends (meaning no pesky seam in the middle), and it can be extended to seat up to 18 people. CHOOSE FAMILY-FRIENDLY FABRICS In addition to their frequent visitors, the homeowners have a 6-year-old daughter and twin 8-year-old sons, so the high-traffic home was also designed with kids in mind. “Indoor-outdoor fabrics are hugely important,” Wilkinson says, “and there are so many different lines.” She recommends Perennials textiles as well as her own line for Fabricut, both of which are known for their durability and stain resistance.