Located near the mountains on Whitefish Lake, a casually sophisticated house offers a Dallas couple the best of both worlds

Compromise is crucial in any healthy relationship, but in an ideal scenario, both parties would get exactly what they want. That’s what happened when David and Margaret Gilbert bought their property on Whitefish Lake in Montana. “My husband loves mountains, but I grew up on the Gulf Coast in Galveston, so water is in my DNA,” Margaret says. “Montana fit the bill for both of us.”

Inspired by the fishing camps that she enjoyed as a child, Margaret commissioned architect Larry Pearson of Pearson Design Group to design a relaxed abode with clean lines—something that would stand out from the more traditional homes the area is known for. 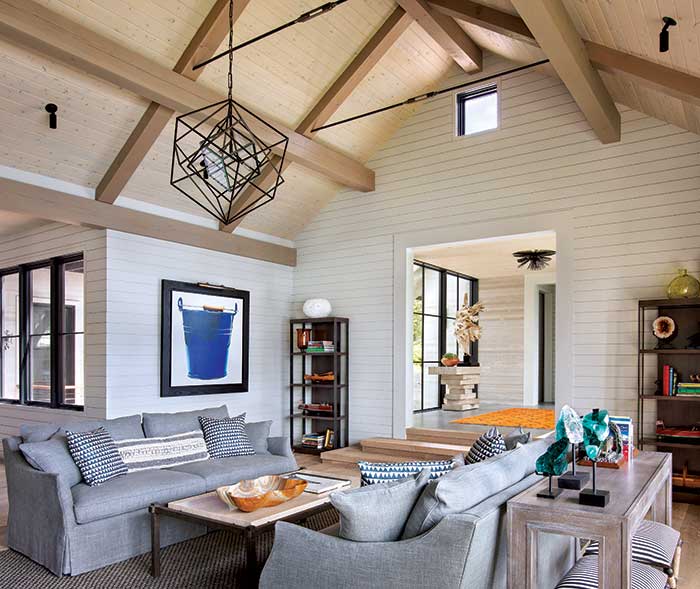 Artwork and accessories enliven the living room, which is furnished with a pair of sofas by Thom Filicia for Vanguard Furniture from David W. Gilbert & Associates, to the trade in Dallas, Texas.

The result is a cedar shiplap-clad house with traditional gabled forms, a board-formed concrete foundation and a contemporary metal roof. A wooden catwalk leads to the front foyer—a sleek bridge with floor-to-ceiling windows that connects the living areas with the master bedroom wing. In addition, a flight of stairs leads directly from the catwalk to the water, bypassing the interior altogether. “It’s quite an interesting way to approach a house,” Pearson says. 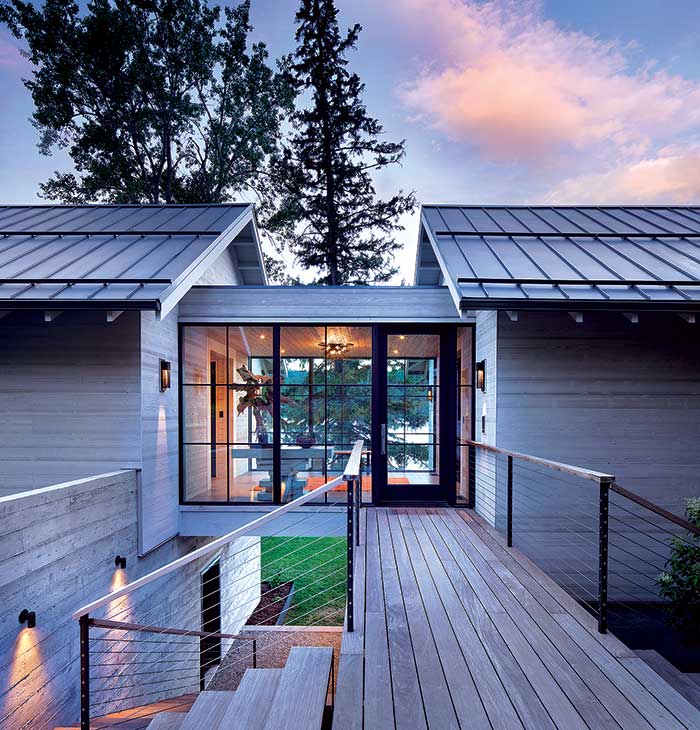 A bridge with large windows connects the main living areas with the master bedroom wing.

The dramatic bridge is one of two on the steeply sloped property. The other crosses a boulder-strewn stream that runs alongside the structure. To create enough space for construction, builder Travis Denman and his crew re-routed the course of the natural tributary, navigating a thicket of regulations in the process. “We diverted the water through a culvert system and manipulated the topography to make a stream that’s been flowing ever since,” Denman says. 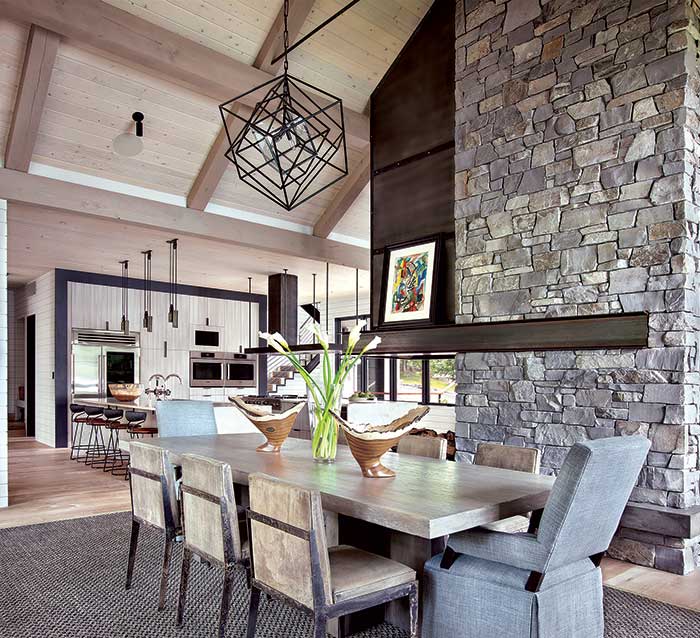 A metal chandelier illuminates a wood dining table and chairs from David W. Gilbert & Associates, to the trade in Dallas, Texas.

When the windows are open, the sound of the rushing water carries into the interior, which was furnished by the couple using pieces from David’s Dallas to-the-trade showroom. Many of them were designed by their longtime friend and former cast member of Bravo’s “Queer Eye for the Straight Guy” Thom Filicia, who consulted on the interior design. “They wanted it to feel authentic and inviting but also modern,” Filicia says.

Working closely with Pearson and Pearson Design Group principal Joshua Barr, Filicia incorporated wide-plank white oak flooring with an aged patina and had the shiplap walls hand-painted so that the brush strokes are visible. Those surfaces play off of the dramatic steel three-sided fireplace, which is supported by a floor-to-ceiling stone wall that divides the living and dining areas. “It’s dramatic, but it serves a specific function,” Pearson says. 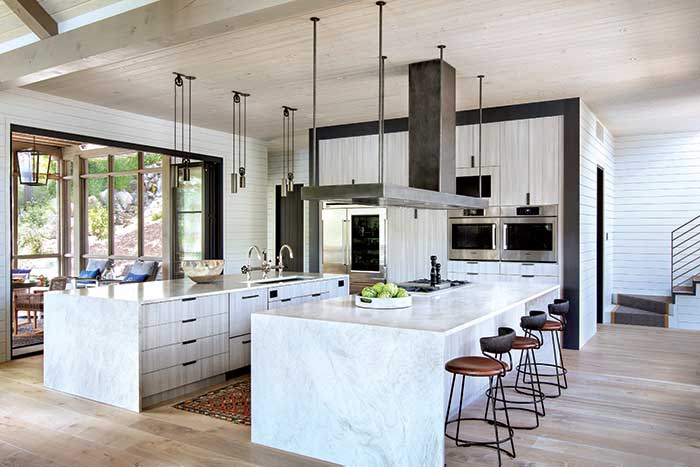 A cooking zone between two quartzite waterfall islands allow the owners to prepare meals while interacting with guests seated on the stools.

A nod to the metalwork throughout, Filicia incorporated the material into the kitchen, framing a wall of appliances and cabinetry with a thick hand-forged steel border. “We wanted the kitchen to feel like it was connected to the architecture,” Filicia explains.

The cooking zone is located conveniently between a pair of quartzite waterfall islands, allowing Margaret, a consummate entertainer, to prepare meals and interact with guests seated on either side. 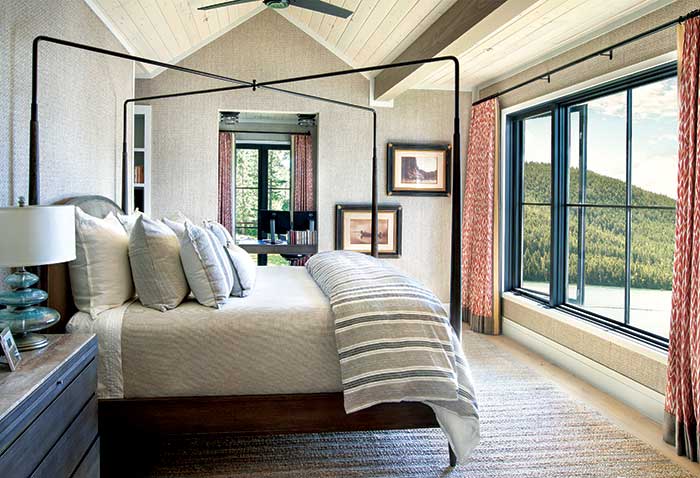 A woven wall covering adds warmth to the master bedroom.

The environment is cozier in the master bedroom, thanks to its textural wall covering, thick wool rug and sumptuous bedding. Travertine-topped end tables from Filicia’s home collection flank a metal four-poster bed while draperies add a pop of color and pattern. “Lying on the bed, it feels like you’re right on top of the water,” Margaret says. 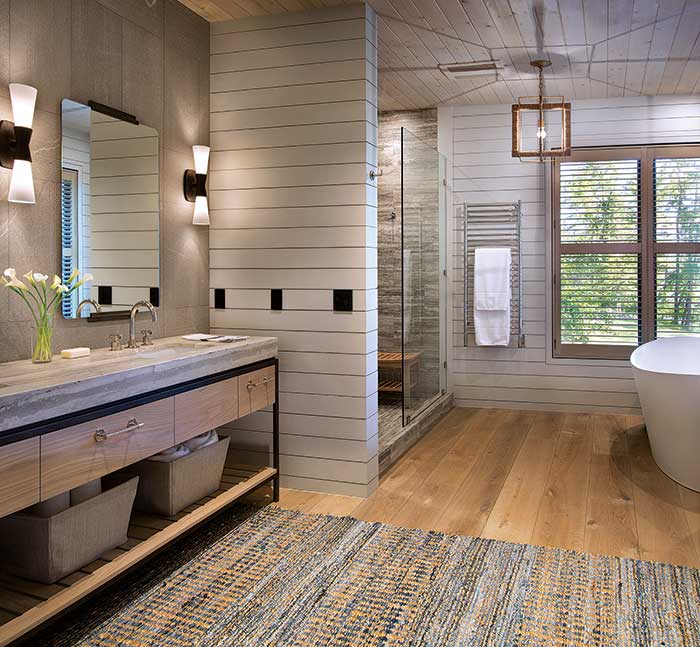 A stone wall behind the vanity complements the painted shiplap in the master bathroom.

Able to work remotely, Margaret spends all summer at the house, often entertaining visiting family and friends. And she loves being out on the water, kayaking, canoeing or “just floating around in the lake, tethered to the buoy out in front of our dock,” Margaret says. 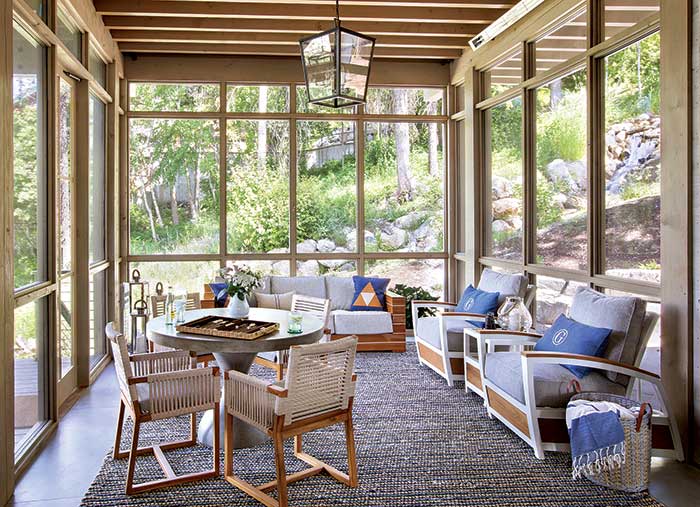 Pieces by Summer Classics, from David W. Gilbert & Associates, to the trade in Dallas, Texas, foster relaxation on the covered porch.

It’s just as relaxing inside, where David and Margaret can often be found on the rustic covered porch just off of the kitchen, their rescue labs, Big Tex and Buddy, by their side, the sound of the rushing spring in the background. “It’s campy and cozy, but it’s open,” Margaret says. “It soothes my soul to be in that house.” 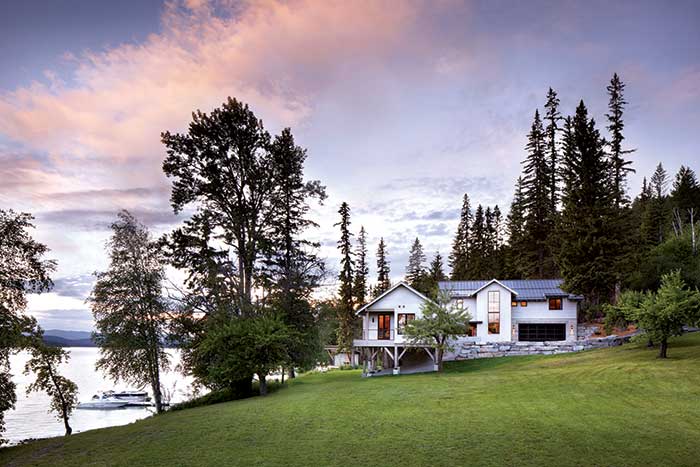 MODERN & RUSTIC: STRIKING THE RIGHT BALANCE
“I wanted this house to have the relaxed and campy feeling of the Adirondacks meets the Hamptons meets modern mountain,” explains Margaret Gilbert of her inspiration (along with husband David) for their new abode on Whitefish Lake in Montana. Architect Larry Pearson and interior designer Thom Filicia knew just how to bring their clients’ unique vision to life.  KEEP IT SIMPLE Comprised of a mix of one-level and traditional two-story gabled forms, the home’s two distinct wings are connected by a sleek glass bridge that’s nothing if not modern. “These simple forms come together in something which is pretty powerful,” Pearson says. USE CLASSIC MATERIALS IN A MODERN WAY The dramatic three-sided fireplace, the streamlined stairway and the modern metal light fixtures throughout illustrate how the designers incorporated a classic material in an up-to-date way.  MIX IT UP Wide-plank oak flooring, stone walls and hand-painted shiplap juxtapose the more modern elements throughout, which include the laminated wood cabinetry and waterfall-style quartzite island in the kitchen. “It’s about the dialogue between all the different materials and textures,” Filicia says. “The architect did a great job of creating a structure that’s modern and authentic.”