Braids on the Inside 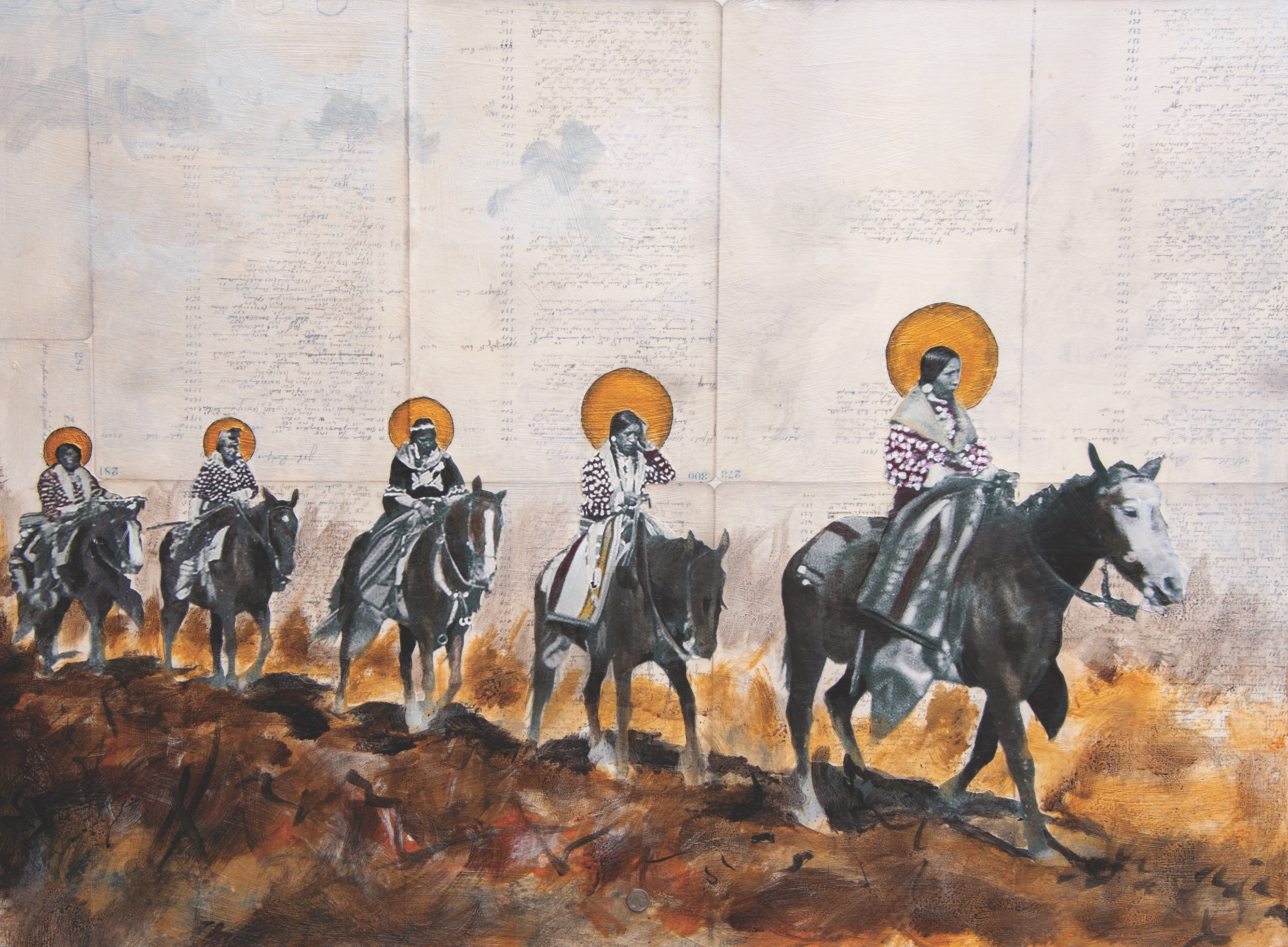 “Sacred Under the Cliffs of the Yellowstone,” part of Pease’s Madonna series honoring heroic Crow women, is painted on ledger paper. Raised by women, Pease draws inspiration from their strength and paints them with reverence. This painting was selected to be a part of the “Apsáalooke Women and Warriors” exhibition at Chicago’s Field Museum. Photo copyright Field Museum.

Historical photographs, pages from old newspapers, vintage letters, 19th-century mining certificates, snippets of poetry and sheets of antique ledger paper— these are the backgrounds 30-year-old Crow/Northern Cheyenne creative Ben Pease uses for his figurative but very contemporary art. He draws on Native traditions and tribal history but is not shy about incorporating technology and pop culture. “Ledger paper references the first point of contact (between Native and European cultures), and my work layered on top of the ledger clearly shows the contrast of values,” he says of his poignant, thought-provoking ledger art series. 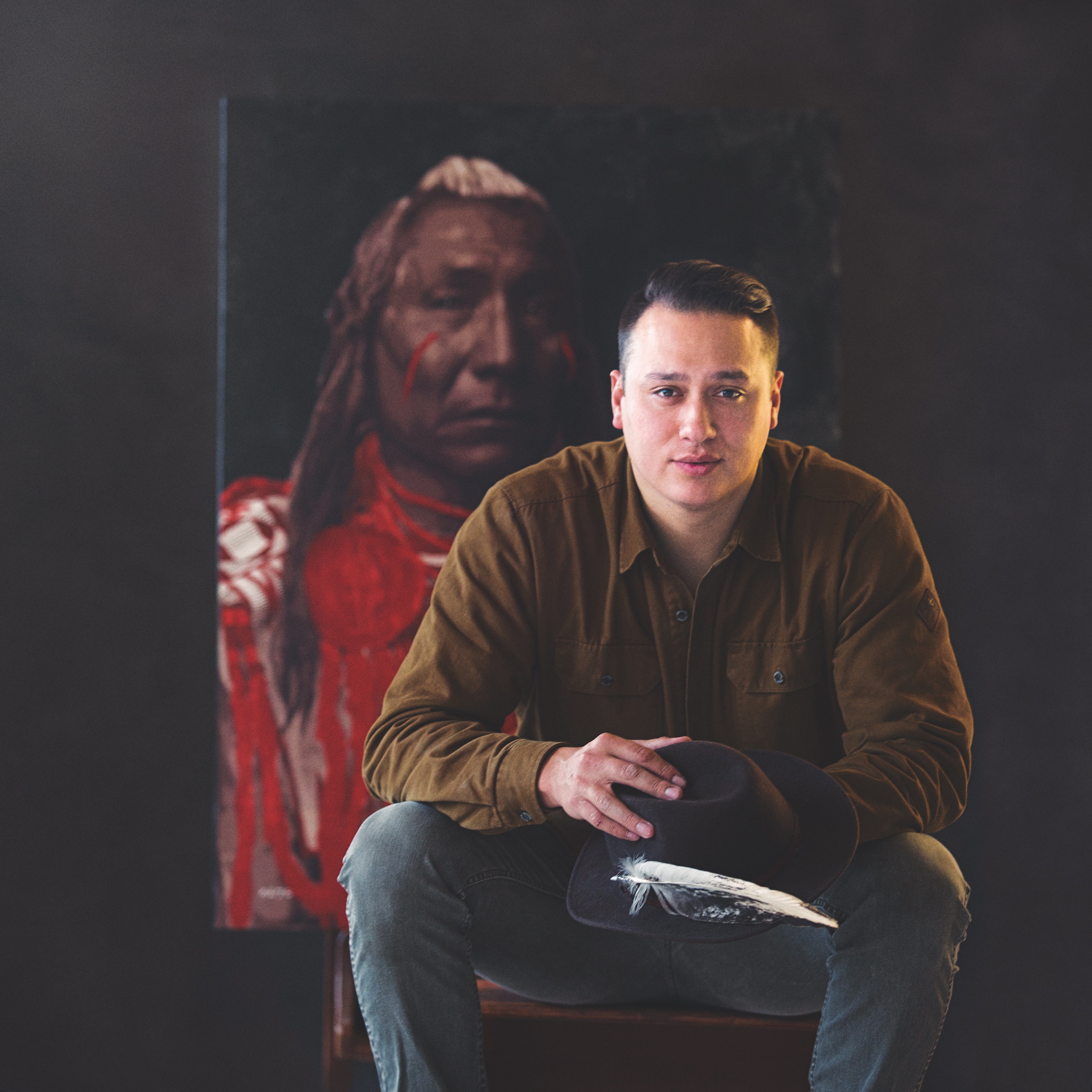 Sitting for a portrait during his residency at Stapleton Gallery in Billings, Montana, Pease is an imposing figure—much like those found in his work. Photo by Ben Pease.

Raised in Lodge Grass, Montana, Pease comes from a family of creatives. His great-grandfather, Ben Pease Sr., provided for his family by making replicas of Crow war sticks, drum rattles, bags and pipes that he sold to  collectors. Controversial at the time, now many of these carefully crafted objects are in museum collections. His grandfather was also a big influence. Ben’s mother earned a bachelor’s degree in fine arts education and became a teacher to make a living as a single mother with three children. 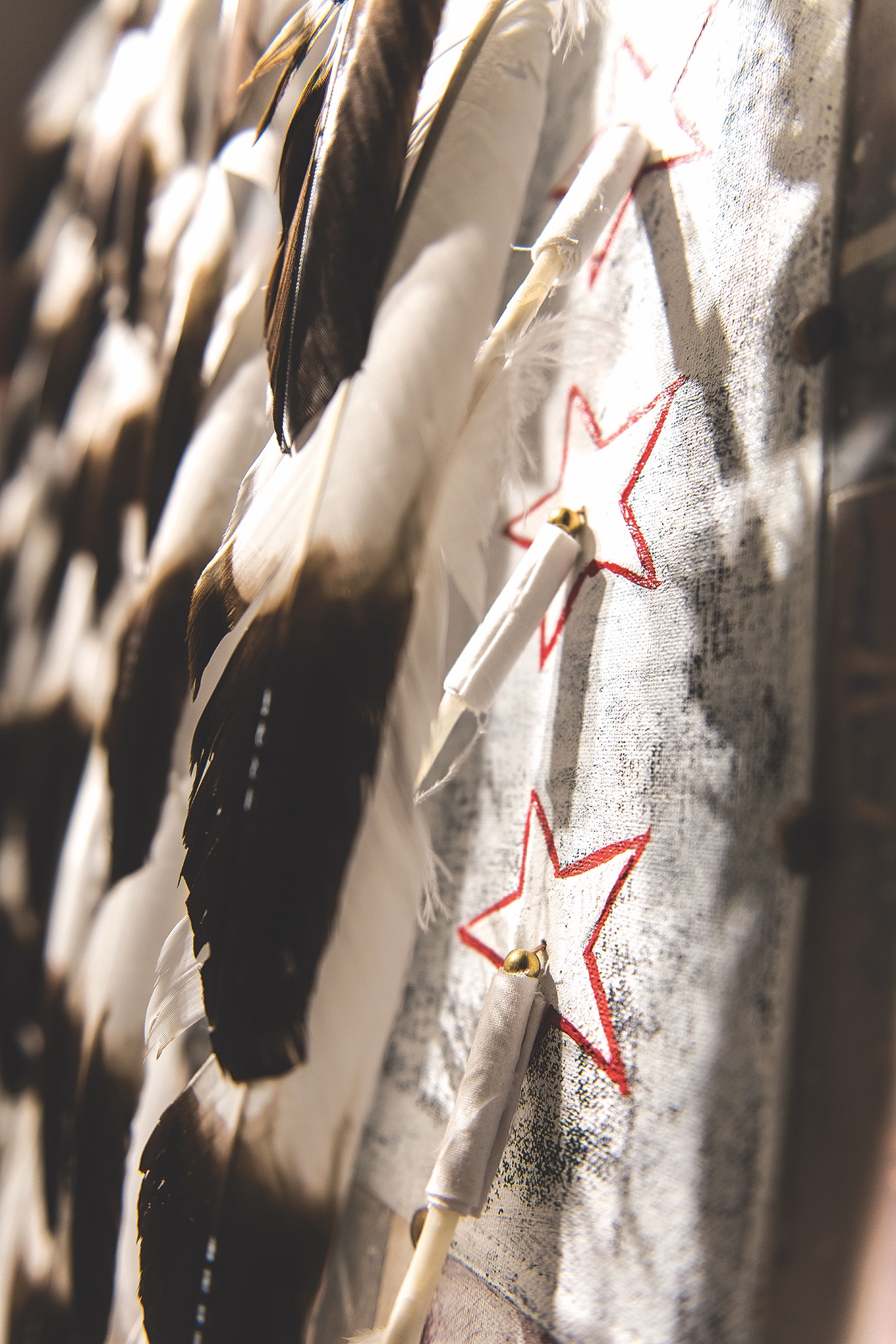 Proficient in many artistic media and forms of expression, Pease includes multi-layered, thoughtful details in his work— painted eagle feathers on a multi-media flag. Photo courtesy of Stapleton Gallery. 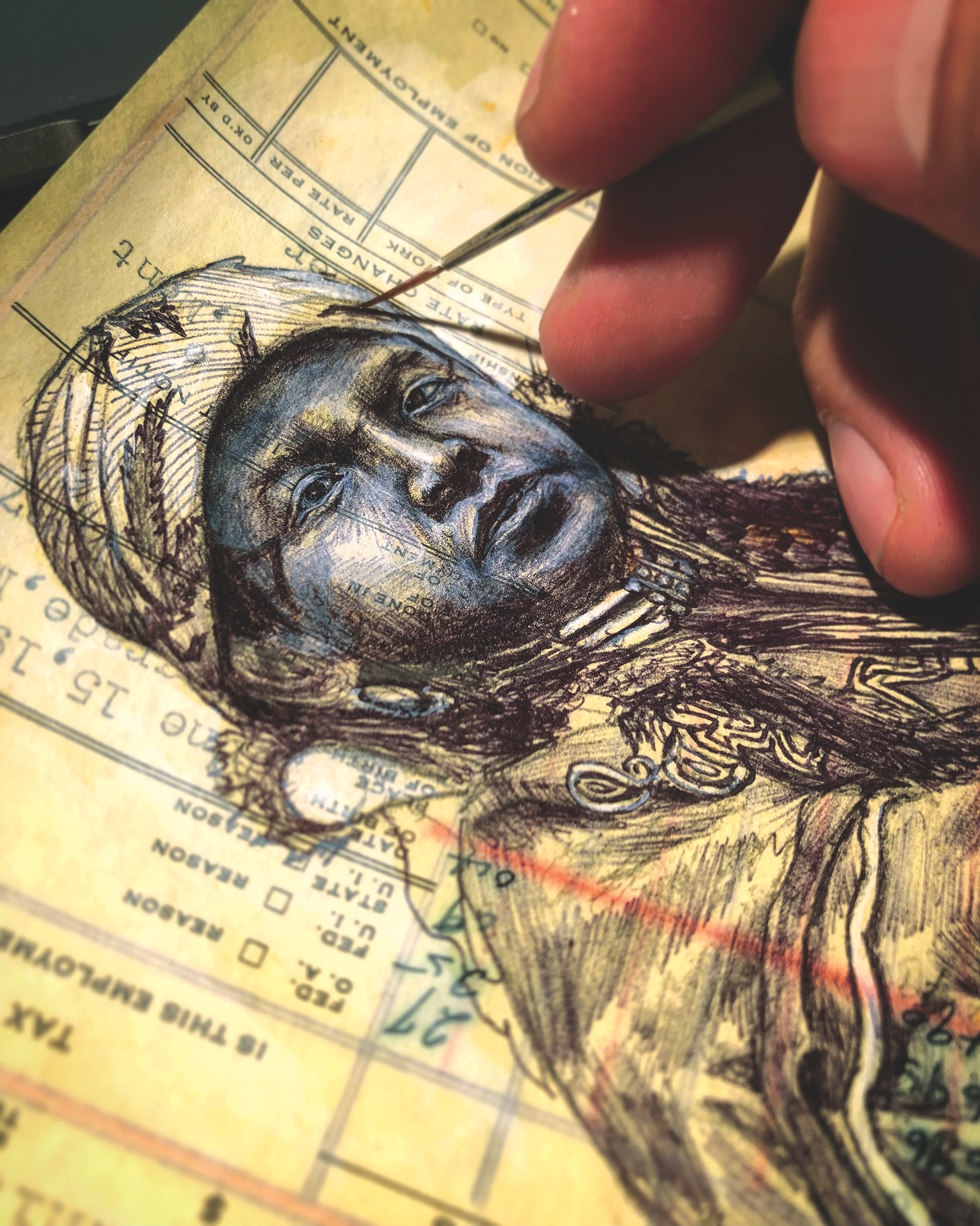 When he was a teenager, his mother took him to the annual exhibition and sale at the C. M. Russell Museum in Great Falls, Montana. “This was a whole other world to a kid from the reservation,” he says. Seeing successful Native artists like Kevin Red Star made him realize that it was possible “to have a career making paintings.” 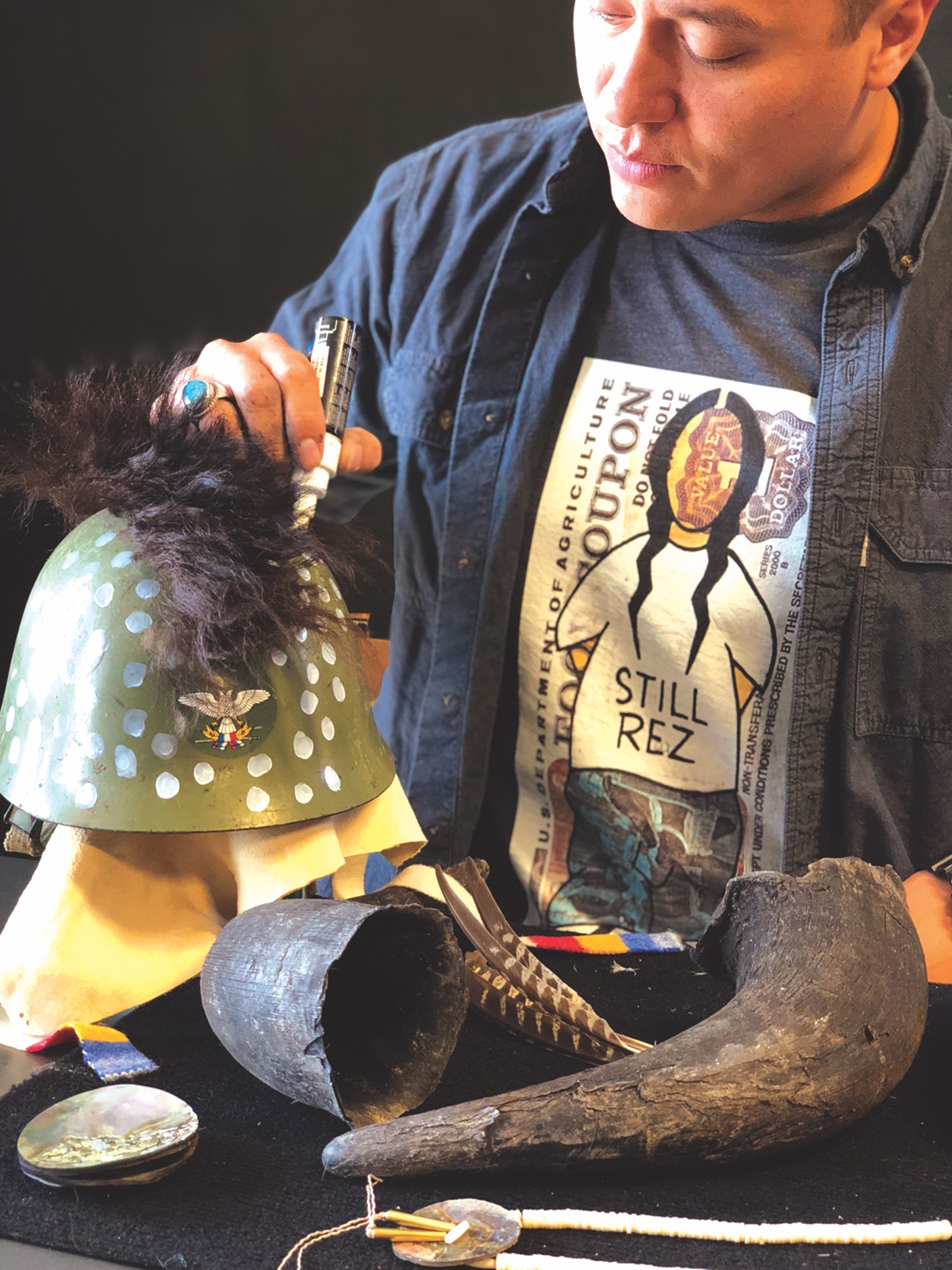 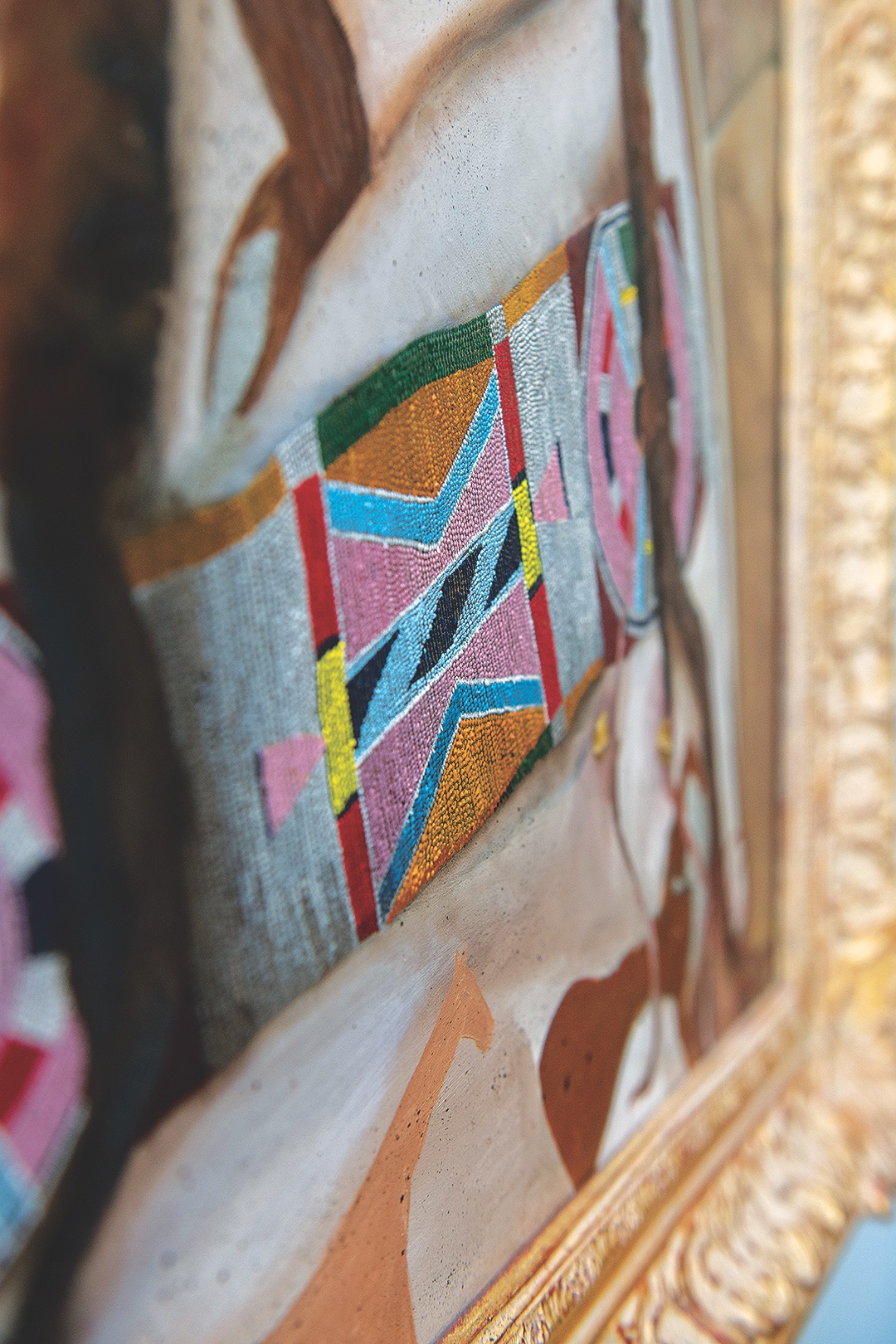 His art raises important questions about the intersection of history, culture and land. Photo courtesy of Stapleton Gallery.

While still in high school, Pease sold a portrait for $400. Over the years, he has continued to paint portraits of individuals, dignitaries and elders of his tribe. “Painting the people of my tribe made me feel good,” he says. “I recognized that feeling and didn’t want to leave it behind.” After high school, Pease headed to Minot State University on football and art scholarships; there, he studied under contemporary Western artist Walter Piehl (who trained under Fritz Scholder). Later, Pease transferred to Montana State University, where he learned from contemporary artist Rollin Beamish. 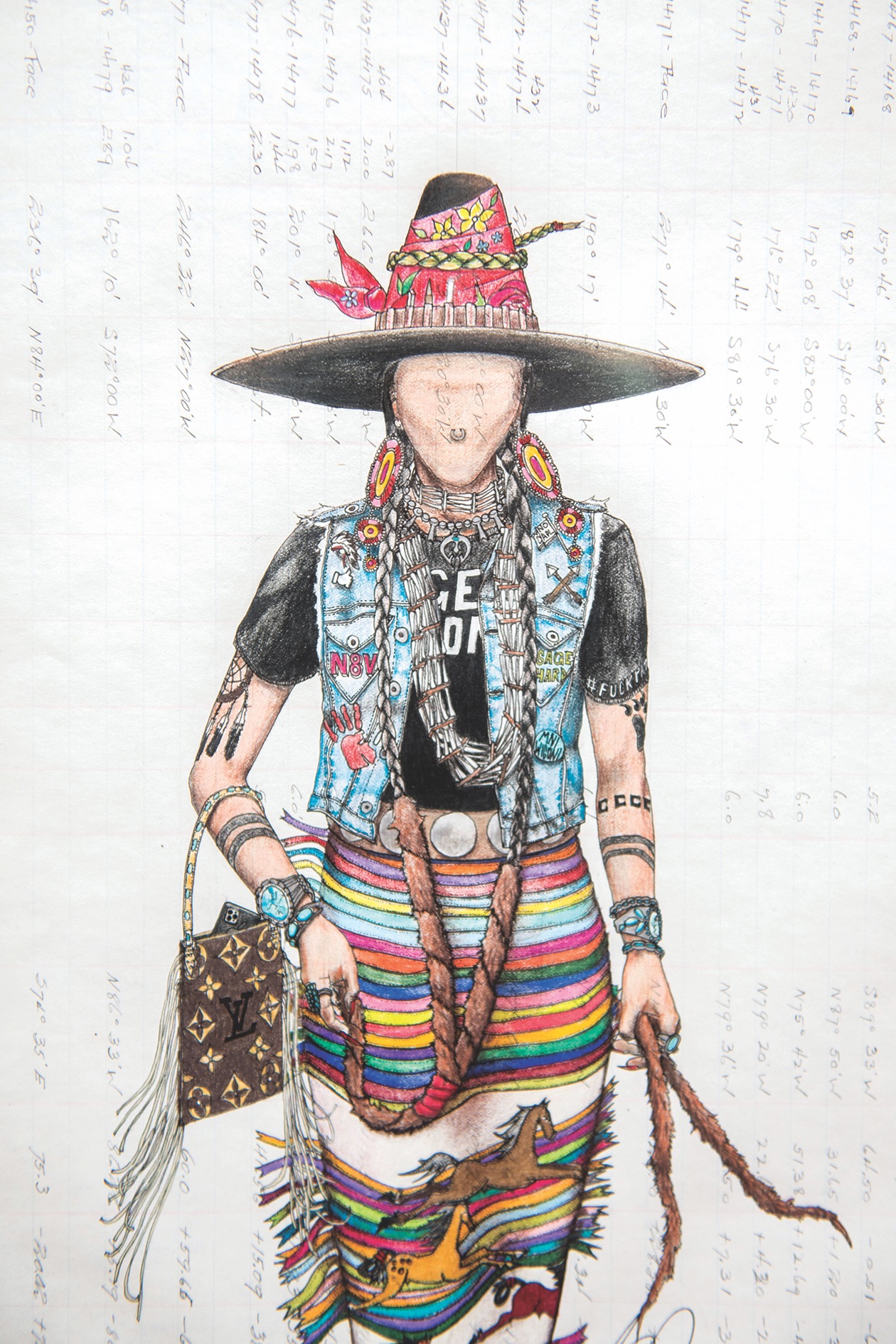 Adhering to—but also pushing the boundaries of—his signature ledger art form, “Ms. Indigenous-er” is a social commentary that is of-today but with an antique twist. Photo courtesy of Stapleton Gallery.

For the past several years, Pease has worked on an indigenous Madonna series that includes historical images of women from the Crow (Apsáalooke) and Cheyenne (Tsitsistas) tribes. “Women have played a huge role in both my life and my art,” he says. Some of these images are included in “Apsáalooke Women and Warriors” at the Field Museum in Chicago (until July 18, 2021). “Ben’s art raises pertinent questions about our time … in an achingly beautiful way that makes people want to look,” says Jeremiah Young of Stapleton Gallery in Billings, Montana. 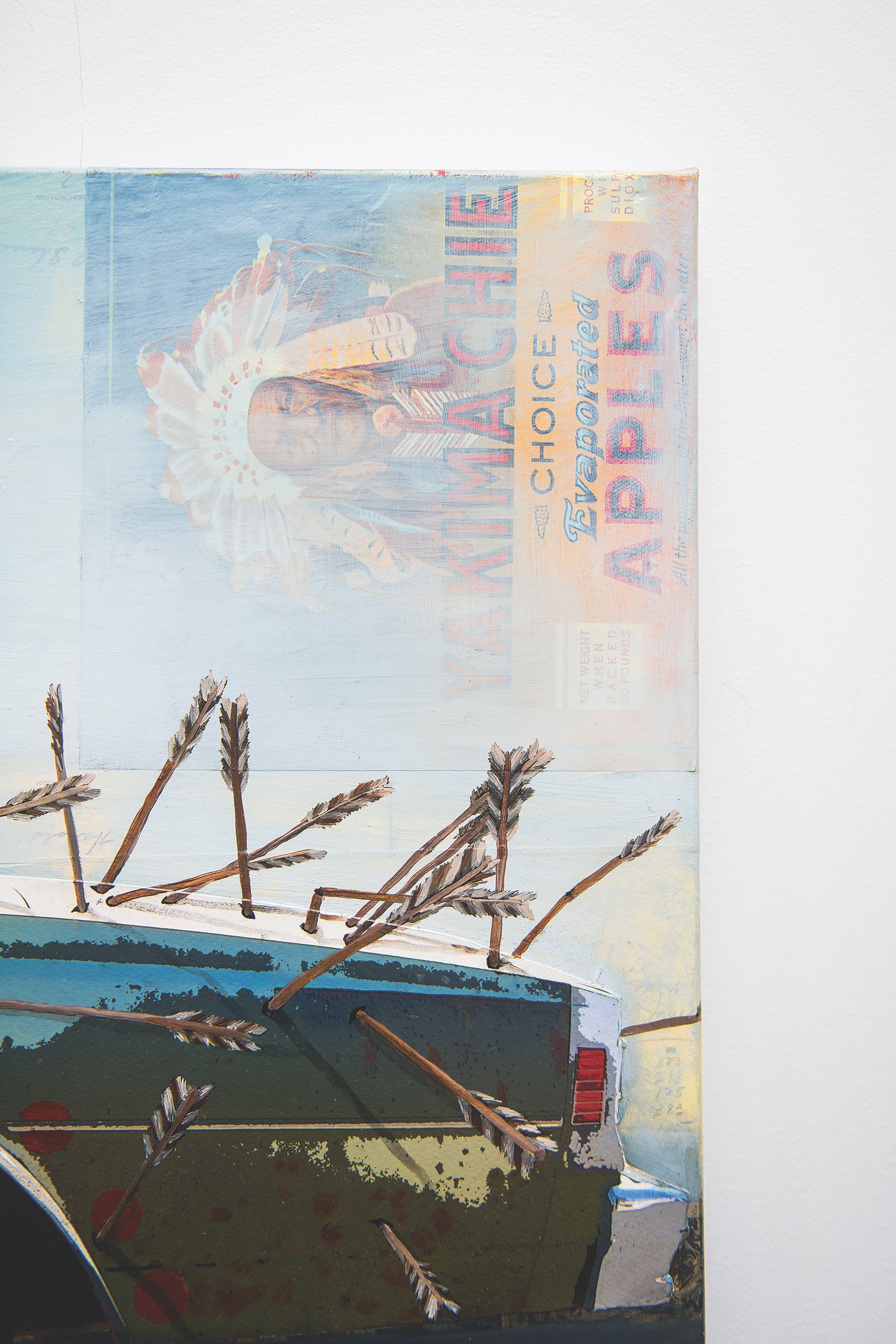 A detail from “War Pony” shows the way in which Pease uses a variety of “found” papers to give his work both depth and complexity. Photo courtesy of Stapleton Gallery.

Now at the Rocky Mountain College in Billings, Pease heads the Artist in Residency Program while also working with the Native American Outreach Program. He’s a visiting artist and lecturer at grade schools, colleges and universities (Yale last year) nationwide. “Many are under the notion that indigenous people no longer exist—even here in Montana, which has one of the highest number of Indian reservations in the U.S.,” he says. Adults are respectful but curious; children, more so. “I tell them that I drive a Ford pickup and use the newest iPhone,” he says. The more inquisitive children ask about his braids. His answer: “I wear my braids on the inside.” 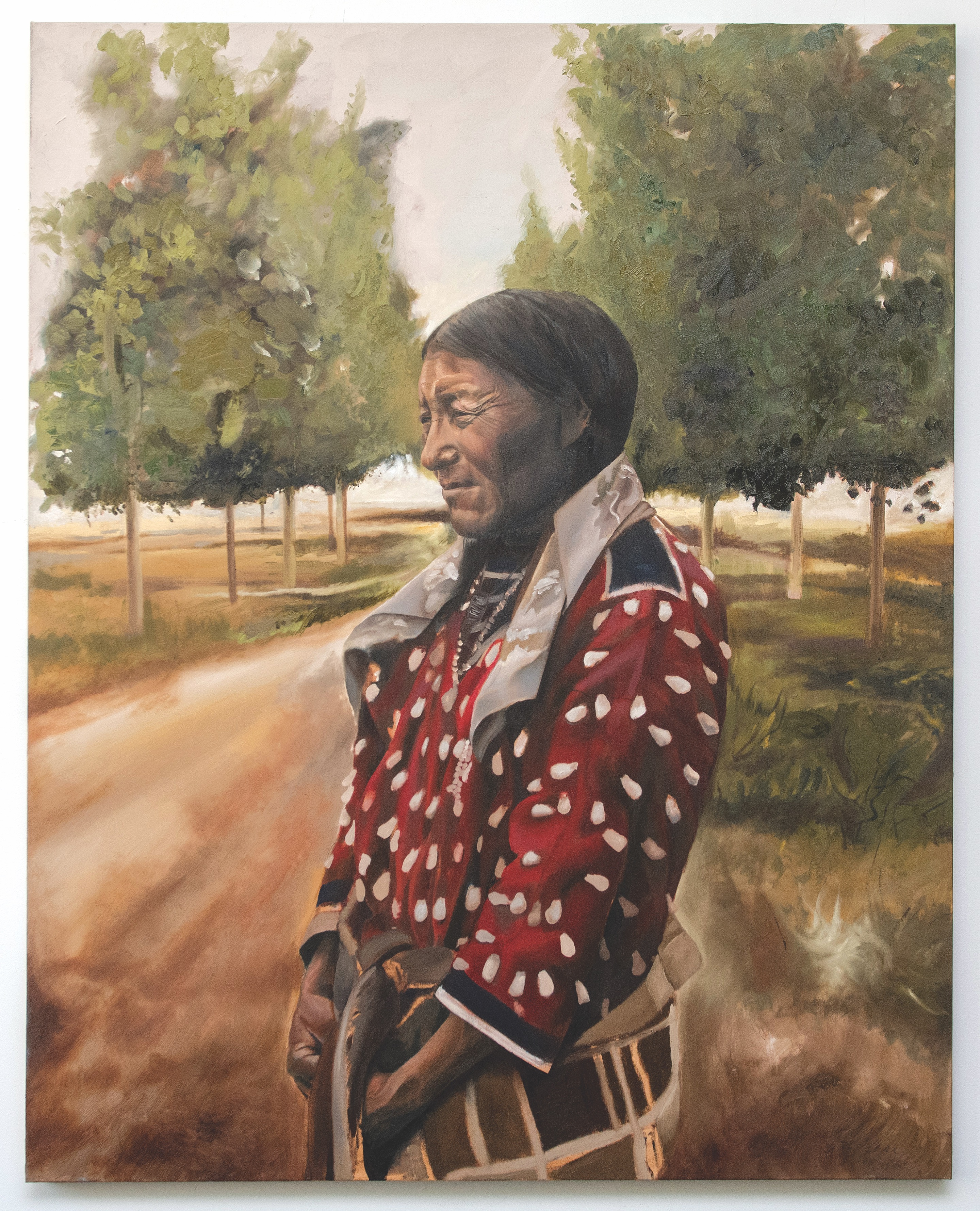 “Of the People, For the People” takes its inspiration from a historic Crow woman showing her wealth and status by the number of elk teeth on her dress. Photo courtesy of Stapleton Gallery.

Pease works in a studio fragrant with the earthy aroma of smudged sage. Comfortable couches invite contemplation. “It is a peaceful space where I can move things around in my head to whatever medium I’m working in,”  he says. He often works barefoot, moving easily between current projects—paintings, drawings, sculpture, bead- work and installations; as many as 15 going at any one time. His wife, two sons and new baby daughter, Alúute, are frequent visitors. “They can work on anything they’d like … to express themselves,” he says. 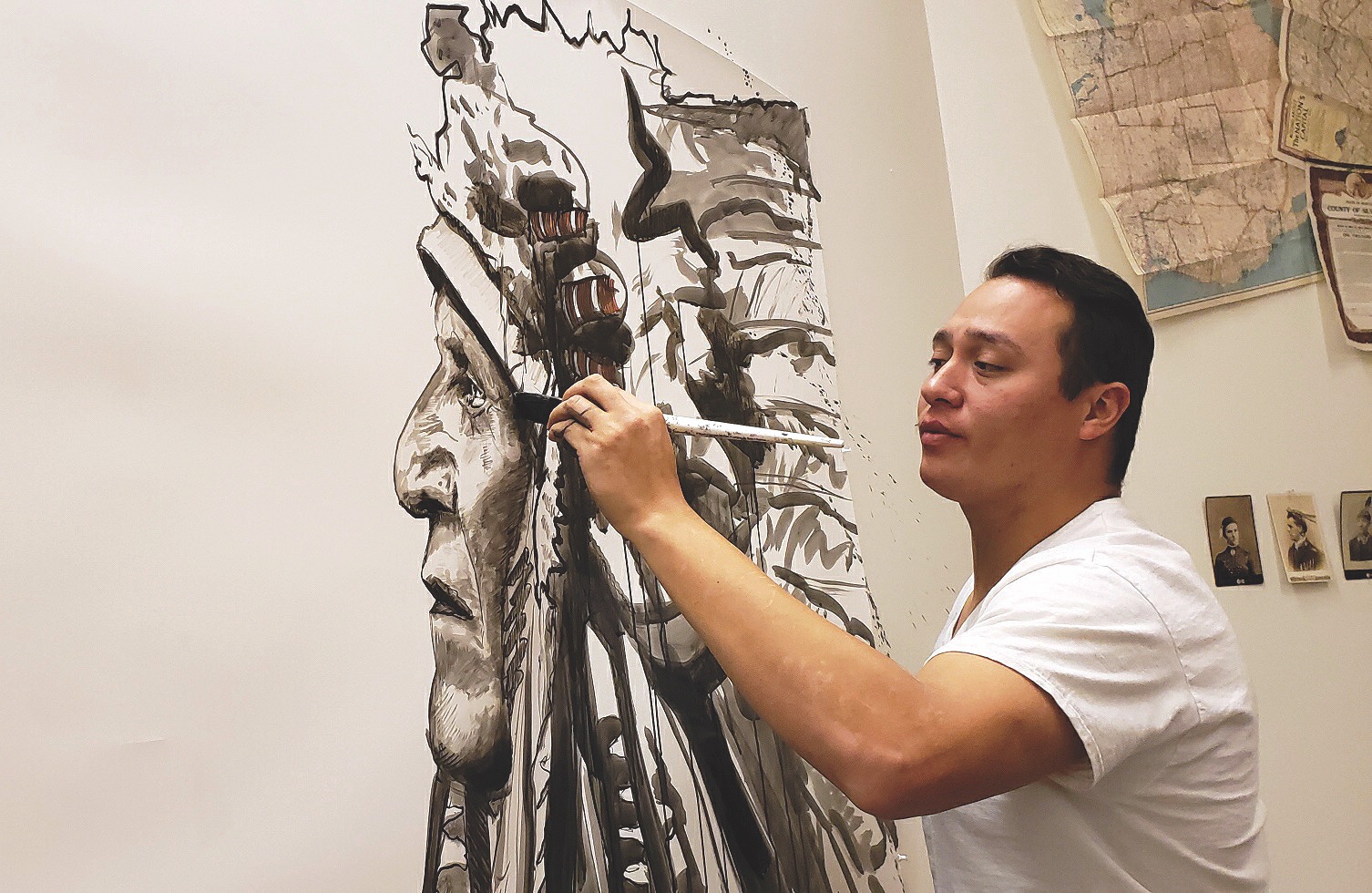 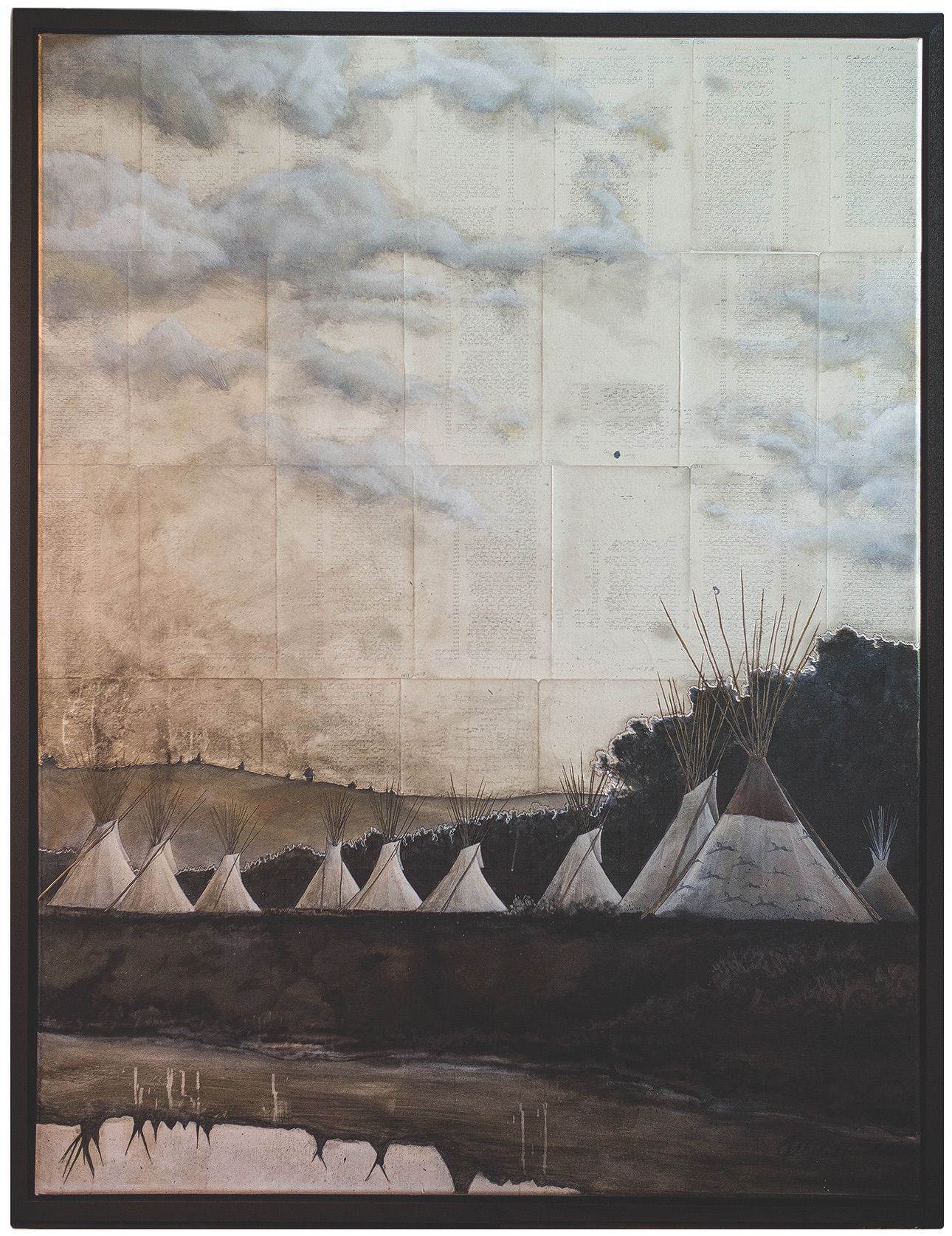 A 6 x 8-foot commissioned work blends the eloquent tradition of painting on graphic ledger paper—but on a monumental scale. The towering sky makes up two-thirds of the painting. Exactingly rendered tipis are reflected in the water. Photo courtesy of Stapleton Gallery.

Asked to characterize his art, Pease says, “My body of work is an expression of my existence in this place, on this land that they call Montana. We have been here long before here was here.”

The Spirit of the Place