A secluded home with mountain, forest and valley views in every direction 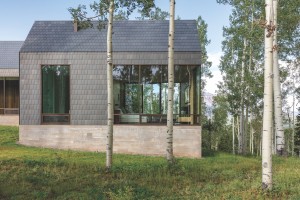 The suite perches on a limestone plinth. “It’s like a glass box in a tree house,” says Bernard, who enjoys spying on the local wildlife through her bedroom’s tall windows. | Photography by Paul Crosby

From her New York City apartment, Mary Bernard has a view into her neighbor’s place. From her home near Telluride, Colorado, the only neighbors she’s likely to spot are a herd of elk ambling across her Aspen-studded expanse of land.

Bernard, a lifelong skier who began vacationing in Telluride in the late 1990s, spent a decade and a half searching for the perfect spot to build her second home. “I looked at everything from places in town to ranches to houses in subdivisions,” she recalls. 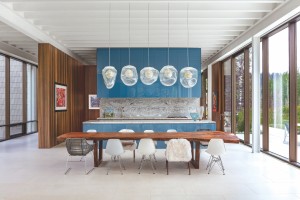 An equally rigorous hunt for the right architect led Bernard to VJAA, a Minneapolis-based architectural firm headed up by the husband-and-wife team of Vincent James and Jennifer Yoos with a broad portfolio of cultural, commercial and residential projects around the country. 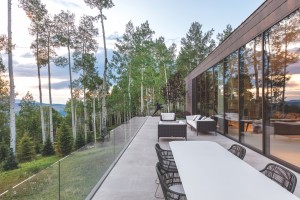 The expansive limestone deck is raised and surrounded by a cantilevered glass railing. “We had options to make it more open,” architect Vince James says, “but Mary said, ‘No, I don’t want bears on the deck.”

Along with project architect Nate Steuerwald, the design pros came up with an elegantly simple scheme of three distinct but connected pods. Bernard’s bedroom suite anchors one end, a two-story module holding the garage, mudroom and three guest suites sits at the other end, and all the public areas—kitchen, dining and living room—occupy the long, window-lined structure in between.

Architects and client alike envisioned the house as a quiet presence on the site, not just respecting its environment but looking as though it might have sprung from the land itself. Although they considered flat roofs, they ultimately went with peaked versions. “They emulate the mountain forms in the distance, which are monolithic and prismatic,” James says. 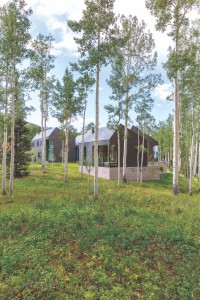 Bonderized metal roofs and siding and a limestone base give the home its quiet presence. The two-story pod of guest suites is on the left, while the homeowner’s own bedroom suite anchors the right end.

All three volumes are cladded and roofed with bonderized metal, a material that blends into the wooded surroundings, stands up to the elements and takes on an appealing patina over time. “It has a warm undertone, and it changes depending on the way the light hits it throughout the day,” says Steuerwald. Inside, everything was designed to keep the focus on the outdoors. “The materials are natural, of the earth and chosen to blend with the view,” Bernard says. 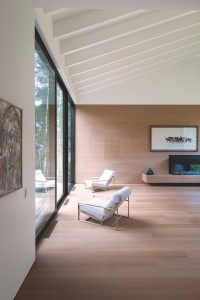 White oak floors and walls give the primary bedroom a serene feeling.

Floating walls of fumed eucalyptus in the public spaces and white oak walls in the bedrooms reference the hundreds of trees that surround the home. Underfoot, limestone in the kitchen, dining and living rooms and white oak in the bedrooms nod to the forest floor. The steel ceilings and their wood beams wear white paint to suggest fair-weather clouds. And the kitchen cabinetry of back-painted glass in a glorious azure hue mirrors the sky. “Telluride has the bluest sky I’ve ever seen,” Steuerwald says. “Mary wanted to do something really different for the island and cabinets. This lets the light bounce back and expand the space. It feels like you’re outside.” 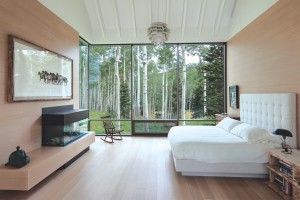 Furnishings throughout the house are simple and streamlined, the better to maintain the focus on the view. The primary bedroom’s glass fireplace keeps things cozy on wintry days.

Client and professionals alike enjoyed the process and love the result. “Mary was really involved,” James says. “When we have a client who’s a real collaborator it becomes unique, something that wouldn’t have happened any other way.”