Jeremiah Young has a gift for orchestrating environments. As creative director of Kibler & Kirch, the thriving Montana interior design firm founded in Red Lodge in 1990, Young specializes in seeing the potential of spaces and envisioning something completely new. So, it’s no surprise that he fell in love with the faded grandeur of the dignified—albeit formerly abandoned—1904 Stapleton building in downtown Billings. When the building was originally constructed, a central core space had been left open for light and ventilation—when that space was filled, it created a long, second-floor corridor that seemed to Young like the perfect place for an art gallery.

In the summer of 2016, Young and Abigail Hornik-Minckler—his co-curator and designated “art hunter”—launched the Stapleton Gallery to nurture and celebrate authentic Montana artistry. Sophisticated yet welcoming, the gallery is a sister business to Kibler & Kirch. “It seemed like a natural extension,” says Young, who is also Stapleton’s curator/gallerist. “We have been helping people collect art, commission art and display collections for years.” 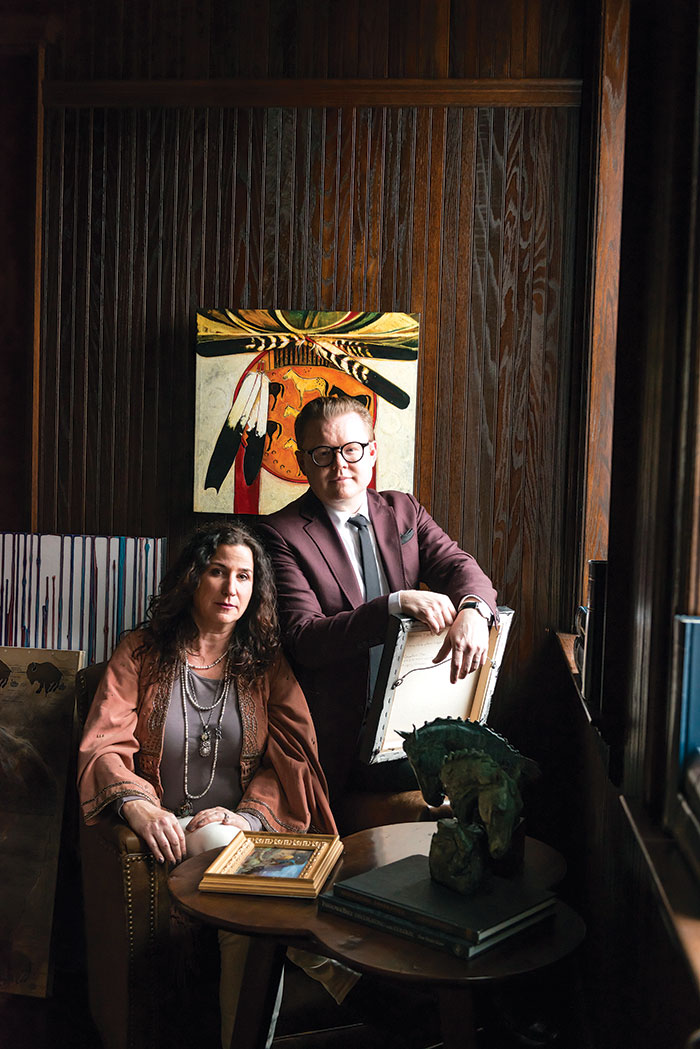 The curators have assembled an exciting group of emerging and established Montana-based artists working in a wide range of media. “There are more working artists per capita in Montana than in any other state,” Young explains. “It’s a fertile field.” And the standards are high: Hornik-Minckler and Young are committed to making Stapleton not just a good Montana gallery, but an enduring, world-class gallery.

Exhibitions in the refreshed white-and-black gallery space are unconventional—grand, one-night events for which all of the Stapleton artists are challenged to create pieces addressing a common theme. “We will open the doors for that night and we’ll have hundreds of people show up,” Young says. “It’s a really great atmosphere;
like a happening.” Artwork might share the space with furniture, plants, or folk art—simulating the warm environment of a fabulously artful home. “I come at it from a
perspective of design,” Young says. “It’s art and interiors—kind of flipping the gallery thing on the end a little bit—
it’s the merging of two worlds.”

Beyond the exhibition events, the gallery is also open by appointment, and Stapleton artists often work on special commissions.

“Billings has a surprisingly robust arts scene,” Young says. “We’re having fun—we’re passionate about this. And passion is contagious.”

Chris Boyer is a self-described husband, father, pilot, photographer, geomorphologist, farmer, and goatherd. He studied fluvial geomorphology and spent over 20 years as a commercial pilot and aerial photographer, documenting the patterns of the changing landscape from a bird’s-eye view. Boyer also founded and co-owned a landscape restoration consultancy, devoting a decade to wetland and river channel projects. His documentary and fine art photographs share an eloquent, sharp-eyed overview of the changing world that he has witnessed. 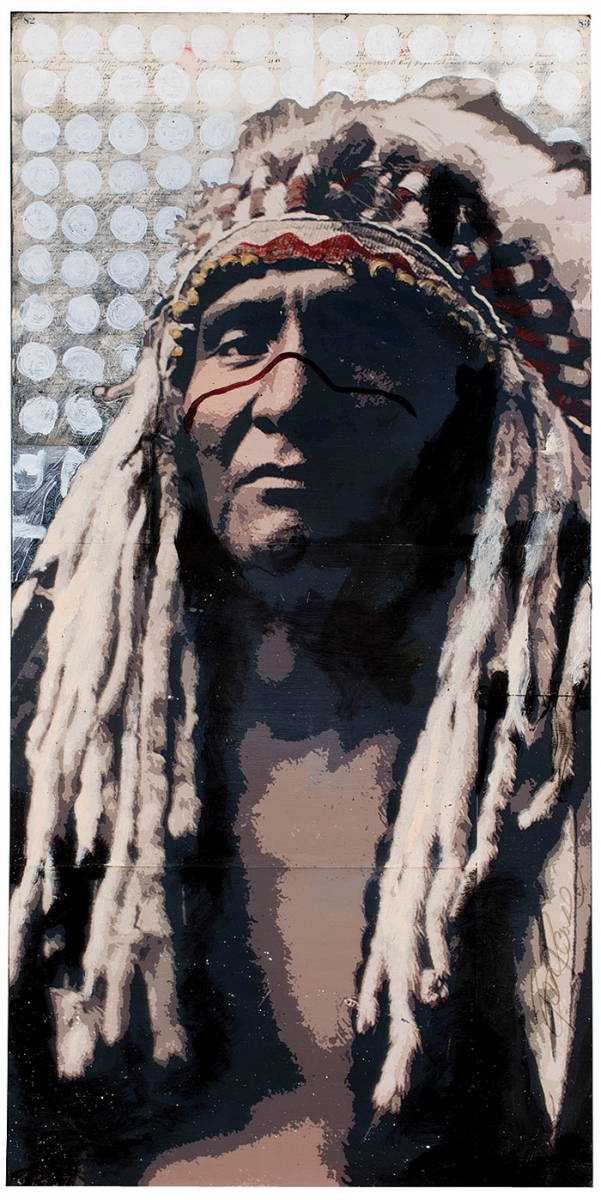 Ben Pease is a Crow/Northern Cheyenne artist who sees himself as a contemporary storyteller, inextricably interwoven with the roles of activist and educator as well. “My journey as a storyteller stands as a continuation and protection of our contemporary indigenous cultures,” he says. Blending antique photo images of historic tribal figures in layered collage with contemporary references to issues like racism, cultural appropriation, exotification and stereotyping, Pease hopes to provoke questions and conversation with his powerful images. 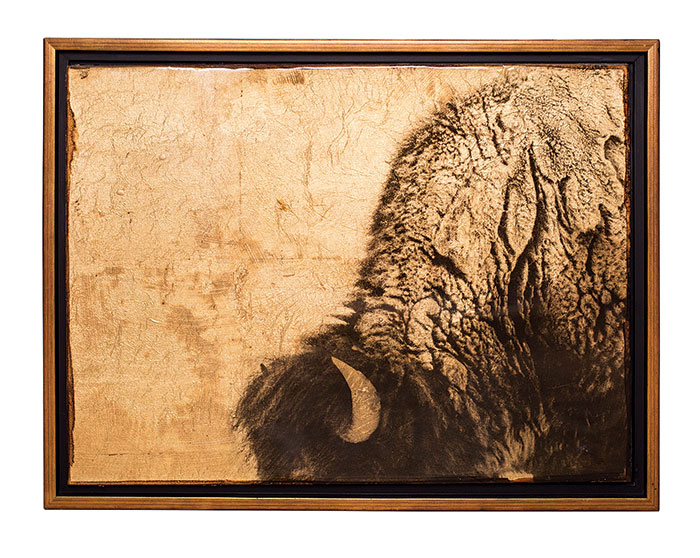 Audrey Hall is a fine art photographer known for her hauntingly gorgeous Western landscapes and soulful horse portraits. Born in Brazil to a multi-cultural family, Hall fell in love with the American West, which has had a profound influence on her work. Now based in Livingston, Montana, she meticulously prints and finishes each exhibition photo by hand. “I always come home to my camera, to my work and to the process,” Hall says. “I return to the thrill of making images, art and storytelling.” 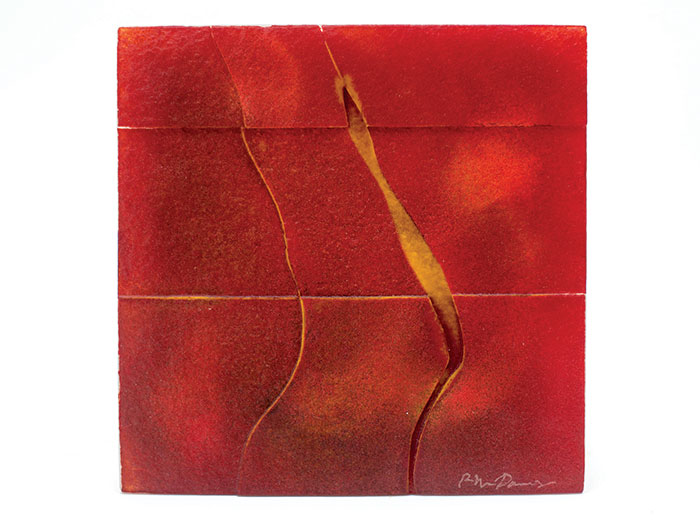 Richard Parrish draws on his expertise as both an architect and an artist to create kiln-formed glass art from his Bozeman-based Fusio Studio. Deeply influenced by the topography of the Intermountain West, Parrish explains, “My work investigates the intersections and collisions between the natural landscape and the human impositions on that landscape.” From wall-mounted bas-relief panels to mixed media sculpture, windows, and public art installations—using diverse techniques including printing and casting— Parrish’s pieces expand the expressive potential of glass. 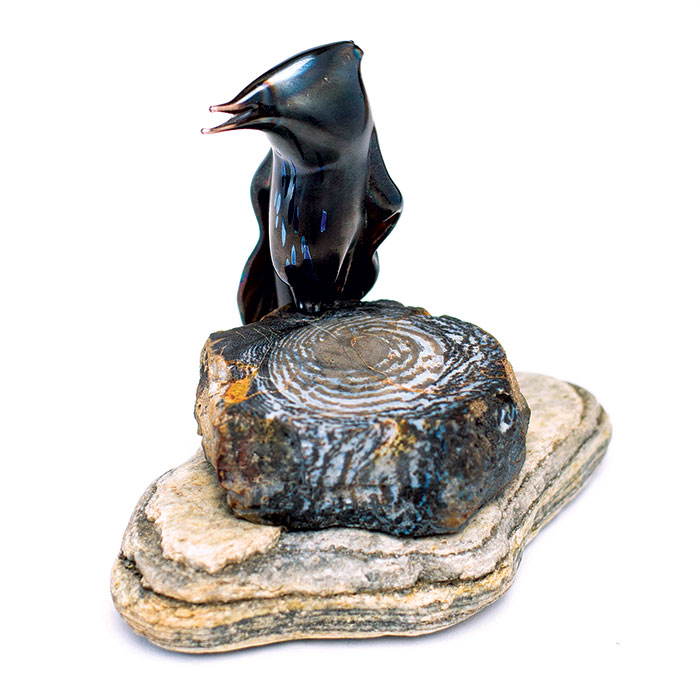 Ona Magaro creates sculpture from glass in her Livingston studio. With fluid lines and limpid colors, Magaro’s forms suggest sleek, abstracted birds and fish, gracefully embodying the dynamic of motion. “Full sculptural expression is spatial—it is the three-dimensional realization of an idea, either by the creation of mass or the manipulation of space,” she explains. “The power of my asymmetrical sculptures, with their curved and slanted lines, builds a dialog between me and the audience.” 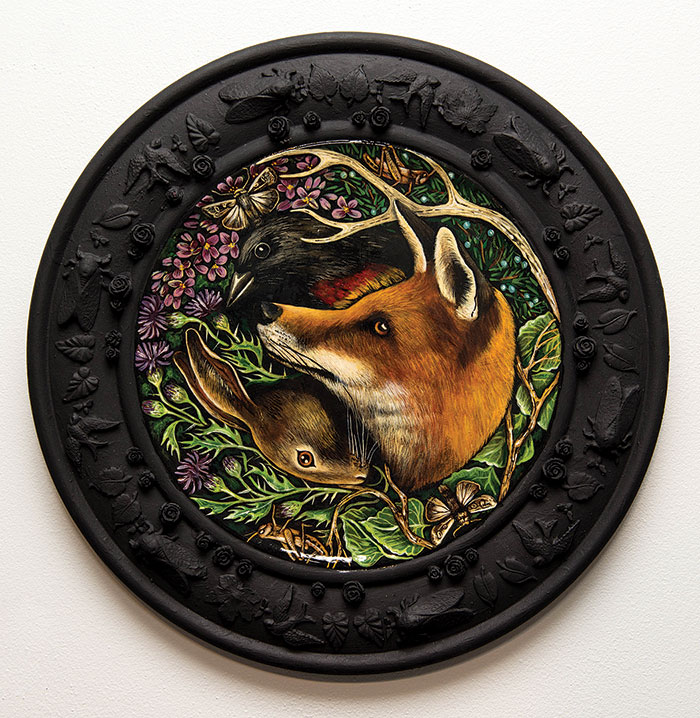 Jennifer Eli French derives inspiration from the worlds of Medieval art, Victoriana, Western landscape, folk tales and “the strange beauty she finds in the darkest corners of history” to create her extraordinary painted works. Born in Colorado, educated in England and on the East Coast, Eli French returned to live in Montana, where her family has ranched for four generations. From intensely embellished skulls and saddles to delicate miniatures and fantasy portraits of animals and surreal scenes, she conjures up unusual and indelible beauty with her painting. 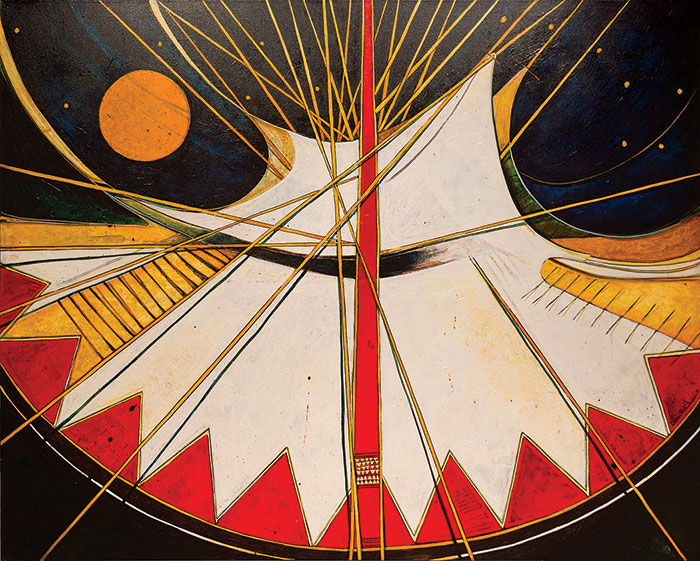 Kevin Red Star is an acclaimed contemporary painter who grew up on the Crow Indian Reservation in Lodge Grass, Montana. In the late 1960s, he was chosen to be among the first students of the Institute of American Indian Arts in Santa Fe, and he continued his studies at the San Francisco Art Institute. Throughout his career, Red Star has explored the significance of tribal traditions through his colorful depictions of ceremonies, women, warriors, horses, teepees and shields. “Indian culture has in the past been ignored to a great extent,” he explains. “It is for me, as well as for many other Indian artists, a rich source of creative expression.” 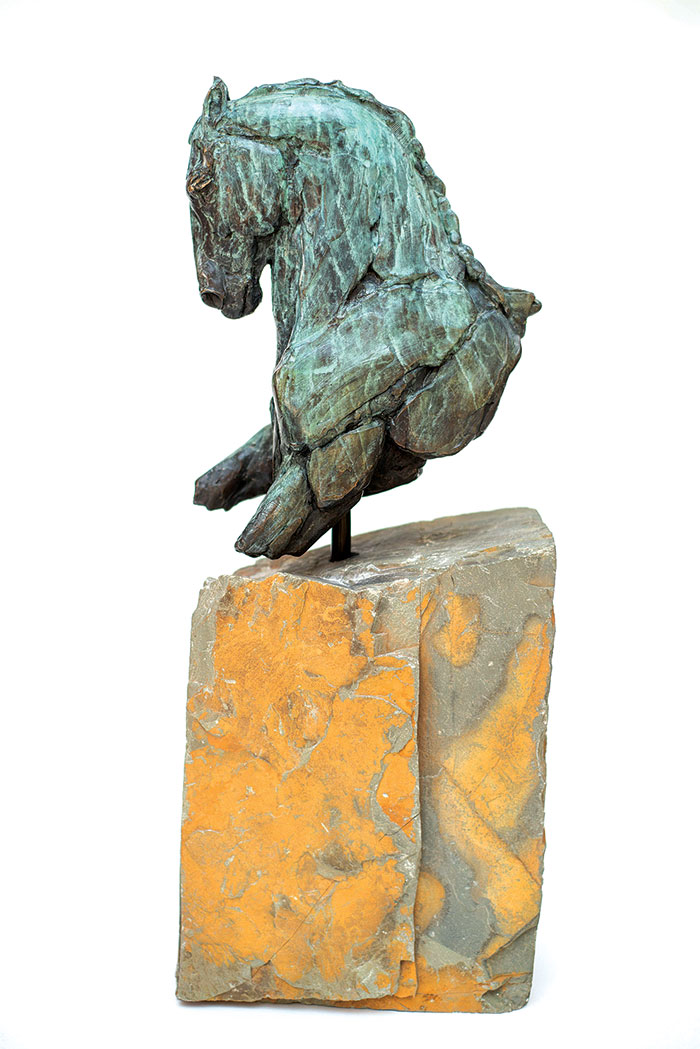 Stephanie Revennaugh admits to a lifelong love affair with horses. Along with studying painting, Revennaugh has managed a dressage barn in Colorado and shown jumpers in South America. “The enduring form of the horse is the vehicle that connects my work to ancient history, modern life and on to a place in the future,” she says. Revennaugh isn’t afraid of experimenting with unconventional materials or mixing traditional with contemporary stylistic influences in her equine sculptures. Her aim is to capture the “sensitive spirit” of each animal. 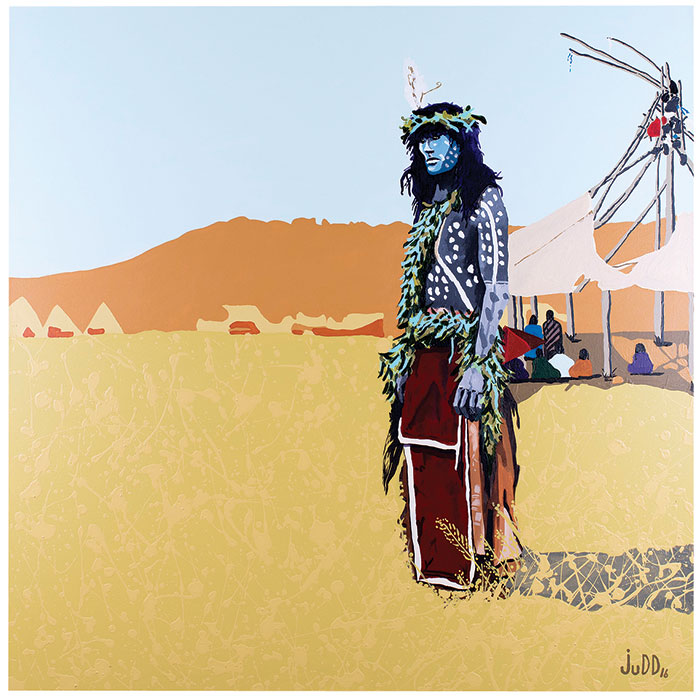 Judd Thompson spent his childhood on the Crow Indian Reservation, where his parents ran the Custer Battlefield Trading Post. Thompson has also been formally adopted by a Crow family, and his insights into cultural intersections inform his artwork. With a passion for color theory Thompson fearlessly experiments in a variety of media—often mixing pen acrylic and spray paint–with a bold, youthful energy. His strong images and pop sensibility break the boundaries of history, speaking to new generations with an exuberant voice. 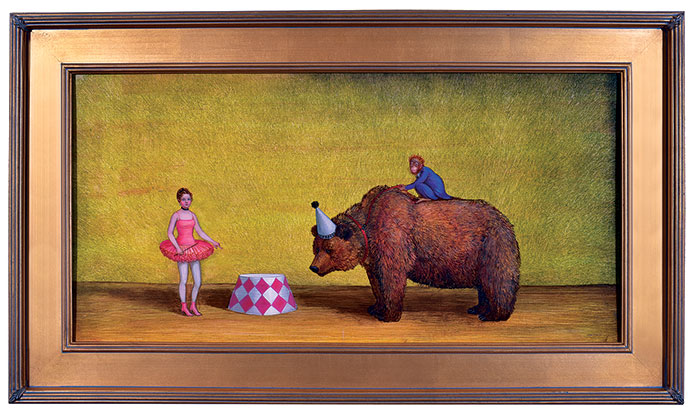 Jennifer Li grew up in California, spending summers with her family on a ranch in Montana. She studied with renowned realist painters at the Art Students League of New York, where she developed a precise oil painting technique inspired by the work of Flemish and Dutch Golden Age masters. Li returned to live and work in Montana in 1998. Her quiet, whimsical paintings have been described by the New York Times as “straight- forwardly beautiful” with “an element of the weird.” 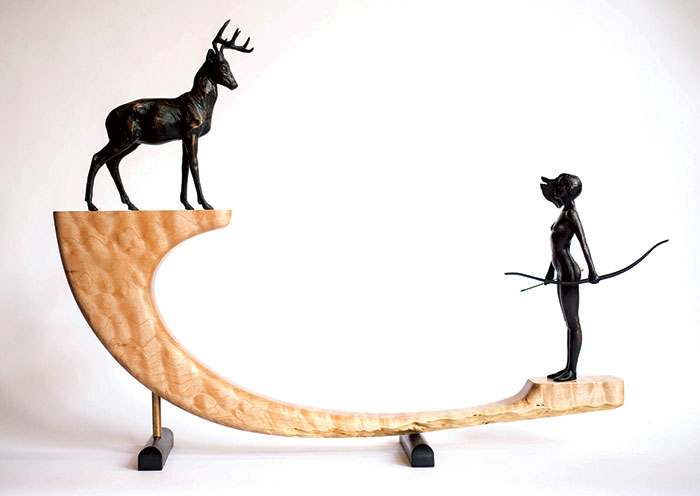 Tyrel Johnson is the youngest of 16 siblings, born to a homemaker mother and sculptor father who also ran a bronze-casting foundry. Johnson worked at the foundry himself, and began experimenting with casting at a young age. His passion for woodworking and sculpting—along with meticulous attention to anatomical accuracy—continues to inspire his creative expression. Johnson’s sculptural pieces often combine wood and bronze in compositions exploring the interplay between humans and animals. “It is exciting to know that
I will continue to sculpt, and continue to better represent the human condition, as I know it,” he says. 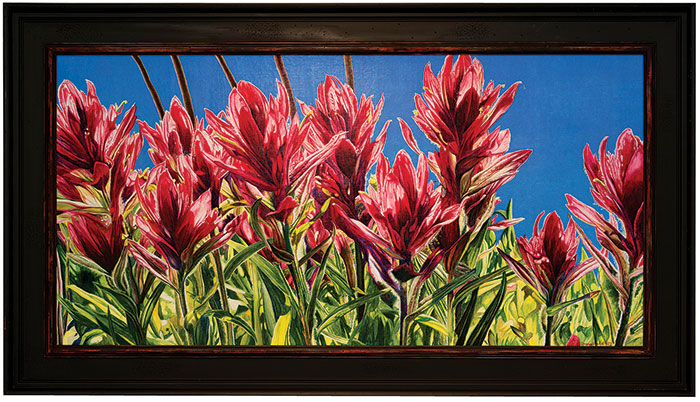 Dominique Paulus was born in Paris, but her heart now belongs to Montana. She has a passion for nature—especially birds—helping with surveys and wildlife counts for Cornell, Audubon and the U.S. Forest Service in her spare time, while also pursuing her art. Paulus is always out in nature, often roaming the Beartooth Mountains and painting what she finds there. “Being a wildlife artist, Montana is heaven,” she admits. Paulus is also a longtime employee of Kibler & Kirch, where she is the resident expert in furniture repair and faux painting. 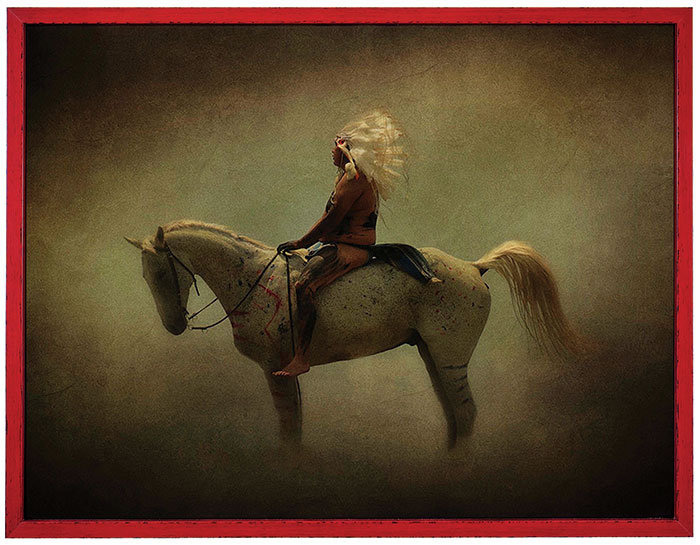 Erika Haight has spent the last seven years documenting her adopted Crow family in black and white photos, offering rare insights into life on the reservation. “I have been presented many opportunities that would not have otherwise been possible if it were not for the kindness, love and acceptance of the Real Bird family,” she notes. The Roundup, Montana-based Haight creates poignant photos that celebrate cultural heritage, family and resilience. “I believe that black-and-white images remove distraction, forcing the viewer to look past outward appearances and into the soul of the subject,” she says.

The Stapleton Gallery is completely transformed by four to five theme-based exhibitions each year, along with occasional special events and artist residencies. Check the gallery website for details and dates. Here are some themes planned for upcoming shows.

January 2019
Music (including the conceptual launch of Stapleton Records)