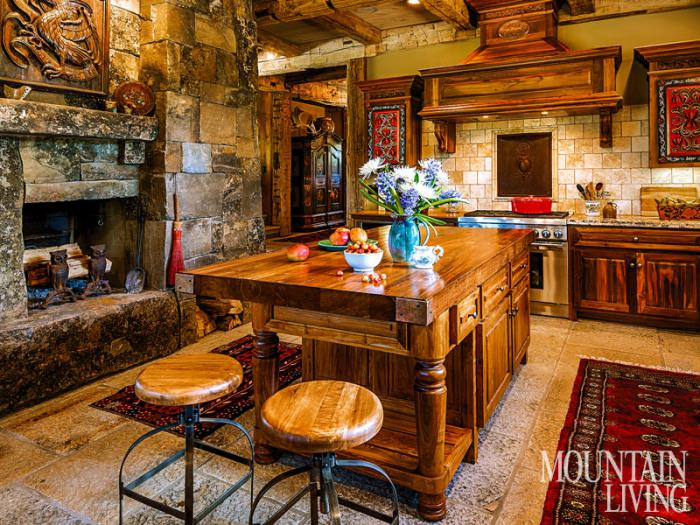 The Setting: Not far from Lake Tahoe, California

The Ingredients: Homeowners Paul and Becky Bolt had an unusual source of inspiration for the alpine retreat they built on a two-acre site near Lake Tahoe. The couple envisioned a historically accurate cabin that would incorporate the style and traditions of Paul’s Prussian, Scandinavian and Nordic heritage.

“In historical European design the hearth was the heart of the home,” architect Larry Pearson says. “It was originally used for heat and cooking, and we used it to anchor the living room, dining room and kitchen.”

Builder Matt Williams of Williams Construction worked to incorporate the numerous reclaimed materials that Paul sourced from 12 countries, including hand-hewn beams, vintage columns, cabinetry, old teak from Indonesia and Canadian oak timbers. And when Paul learned that a 500-year-old Chinese temple’s hand-chiseled stone floors were going to be covered over, he couldn’t resist. He had the massive granite stones—each weighing 125 pounds—shipped to the cabin’s site, where they now lend the home’s floors a well-worn patina he describes as “velvet soft.”

A custom island of repurposed teak dominates the kitchen; the tile backsplash was crafted by Marc Sanders. And Paul commissioned artist Cathy Koball to paint the home’s ceilings and kitchen cabinets with traditional Scandinavian rosemaling motifs.

The Result: To see more of this spectacular alpine home, click here.

This article appears in the November-December 2013 issue of Mountain Living.
Categories: Kitchen & Bath