Before & After: A Historic Ranch Retreat

When landscape architect Richard Shaw initially visited the 40-acre site of his clients’ new home in Colorado’s Roaring Fork Valley, it made a terrible first impression. “The property looked like a used gravel area with lots of weeds,” says Shaw, principal with Aspen-based Design Workshop. “On the whole, it was a pretty unattractive, neglected site.” But he could see that it had potential.

“There aren’t a lot of properties like this in the Aspen area,” Shaw says of the expansive grounds crossed by the Roaring Fork River, “and there were positives and negatives about it from the beginning.” The negatives were fairly obvious. The land had been used as a cattle ranch since the late 1880s, but in 1980 it was turned into an asphalt batch plant to aid with nearby highway construction. The industrial operation left a devastated landscape in its wake.

The property held promise nonetheless. While used as ranchland, the site had accumulated a collection of historic buildings. The original 1887 homestead and four other simple structures, dating up to the 1930s, peppered the landscape. Some of them were original to the property, and others had been moved to the site over the years. “They were on the verge of tumbling down,” Shaw says, “but the owners wanted to restore the buildings to something that was both usable and authentic to the property, creating a historic retreat for themselves and their guests.” 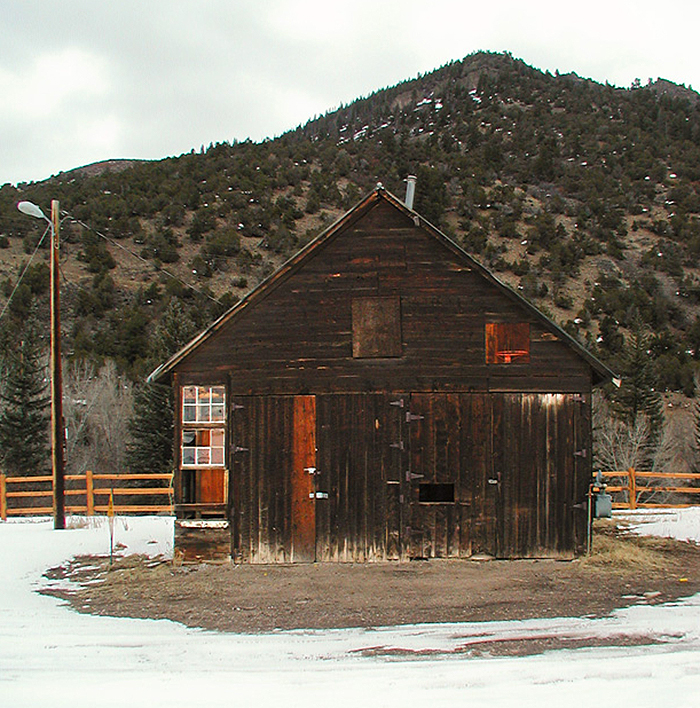 [Before]
"The property's structures contribute to the historic ranch setting of the Roaring Fork Valley's early history," says architect Heidi H. Hoffman of H3 Architects. During the restoration process, the owners researched the histories of each building through interviews and local written records. The results of their findings are now framed at the doorway of each structure, recording their place in the past. 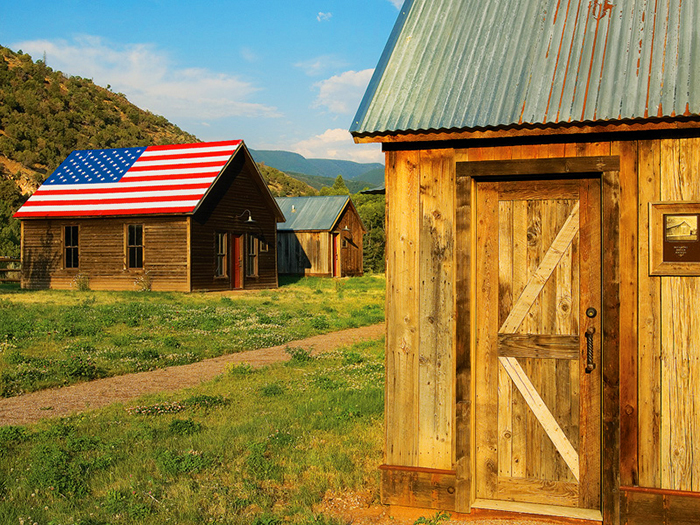 [After]
Here you can see the plaque denoting the structure's history. 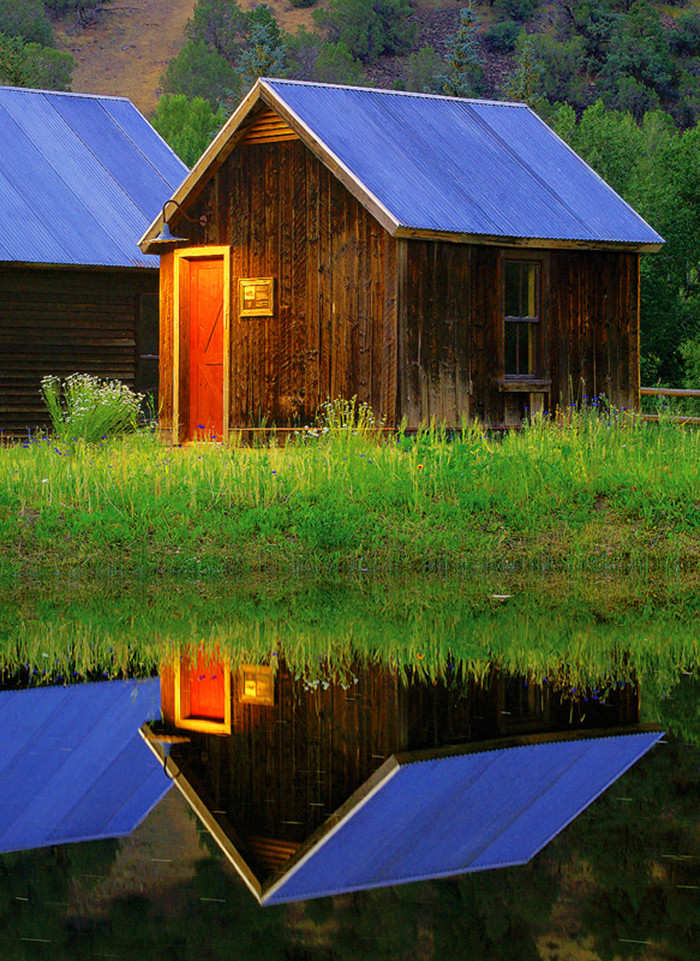 The owners had another specific request. The property’s water-augmentation rights required water to be held on-site, ready to feed into the river during periods of low flow. Instead of installing a reservoir, the owners—fly-fishing enthusiasts—wanted to create fishable waters. “We thought the idea of using the water was a really solid foundation to work around,” Shaw says, “so the design evolved with a combination of ponds and streams and flowing water that would support a habitat for trout.” 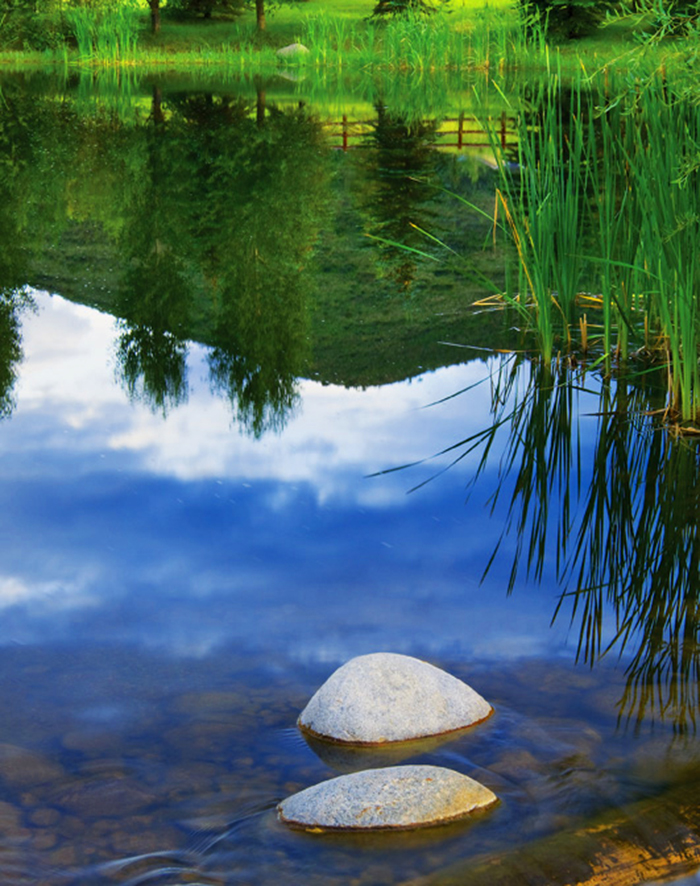 "These are not the types of ponds people typically build," landscape architect Richard Shaw, principal with Design Workshop, says of the water elements added to this 40-acre property near Aspen, Colorado. "If you were to fly over this area in a plane and look down, you wouldn't think someone created this set of water features. You'd think you just never noticed that stream before." 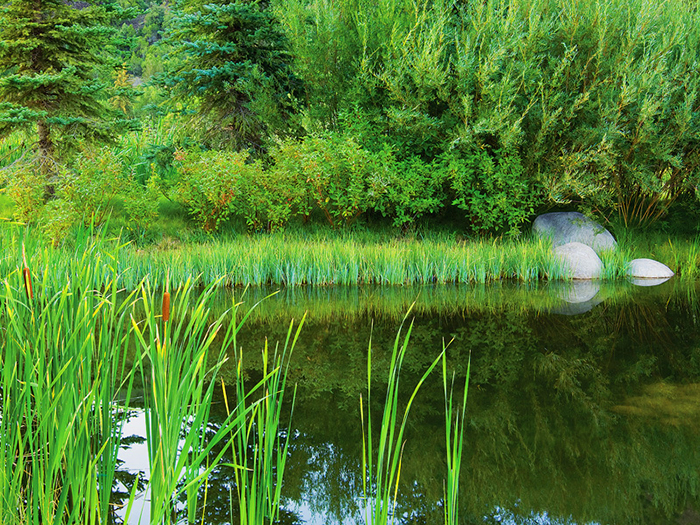 The naturalized water elements, in turn, informed the plant choices. “We used the stream idea as a way to create plant communities you would find in riparian areas,” Shaw says. Colorado spruce, ponderosa pine and narrowleaf cottonwood provide shade, while Nebraska sage, willow and dogwood fill in around the water’s edge. “These are plant materials you’d find along a stream at 8,000 feet,” explains Shaw, who repurposed the earth excavated while creating the water features to contour the rest of the “dead flat site.” 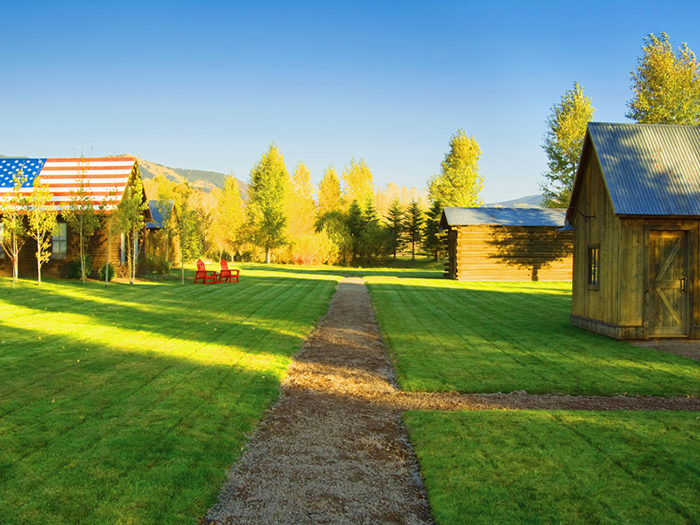 As the landscape flows from enclosed forest-like watercourses to open grassy meadowlands, one manicured section stands apart. Shaw wanted to create a cohesive village-like feel with the existing historic structures. To achieve this, one outlying structure was moved to join the others, which were anchored by the original house. A trimmed lawn went in, and a new pedestrian street was paved between the buildings, connecting them all. 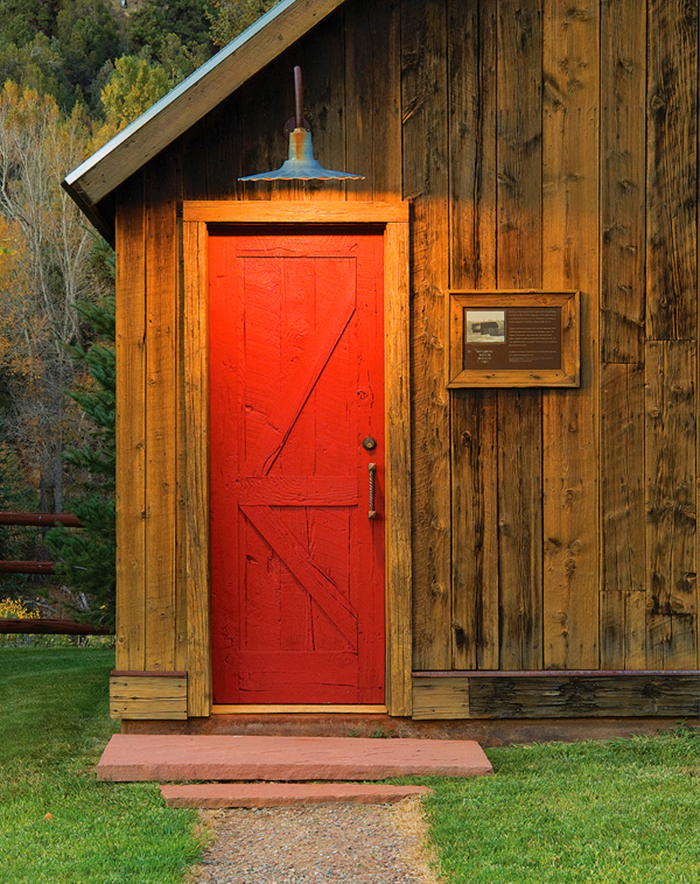 Architect Heidi H. Hoffmann of Aspen-based H3 Architects led the restoration of the deteriorating structures. “The house and outbuildings were stabilized and rehabilitated to meet The Secretary of the Interior’s Standards for Rehabilitation and guidelines for historic buildings,” Hoffmann explains. The buildings were raised, set on new foundations and, in a nod to historical accuracy, given corrugated-metal roofs. The log building was rechinked and decaying siding was replaced. “Recycled materials were used whenever possible to match the patina of the historic materials,” she says. 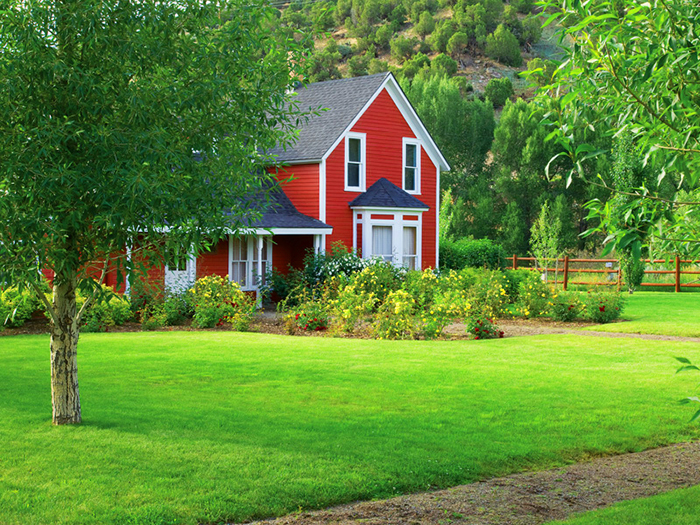 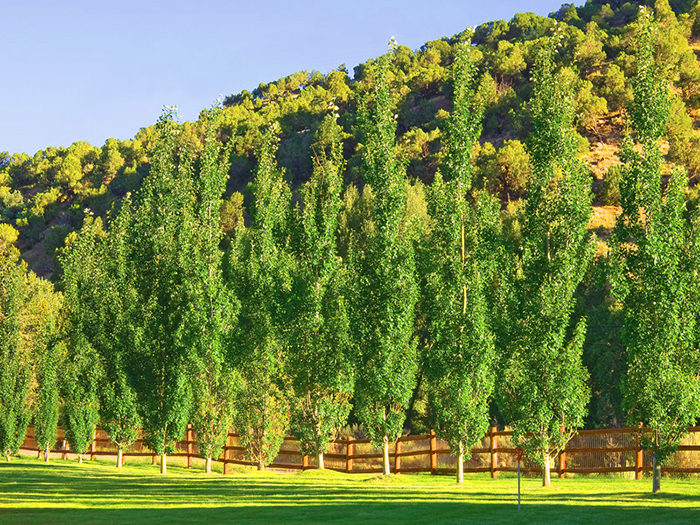 Inspired by the region’s historic compounds, Shaw planted a row of Lombardy poplars to act as a windbreak around the buildings and used the trees again to line either side of the property’s new entrance road. “Those features mimic the settlement patterns you’d find in the West,” he says, “but the rest is an unabashed re-creation of a stream environment.” 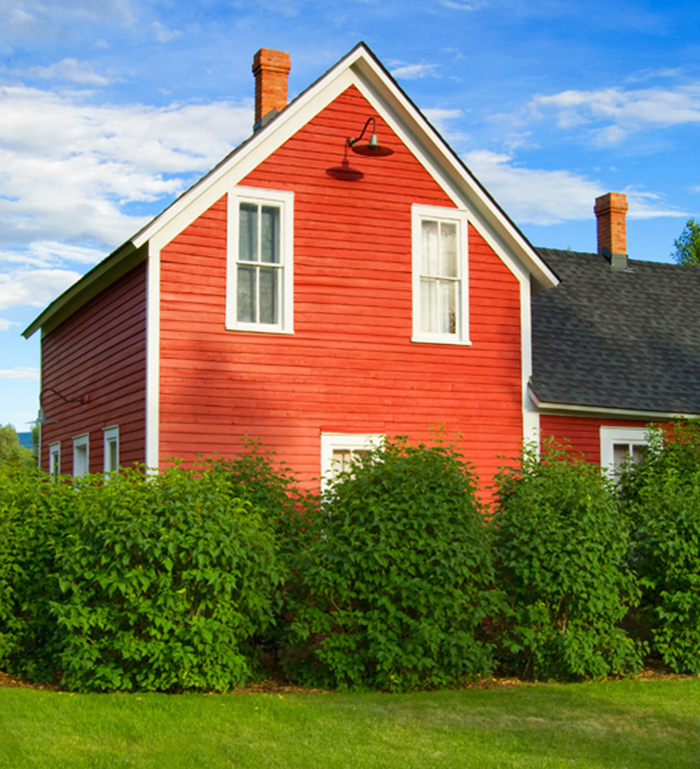 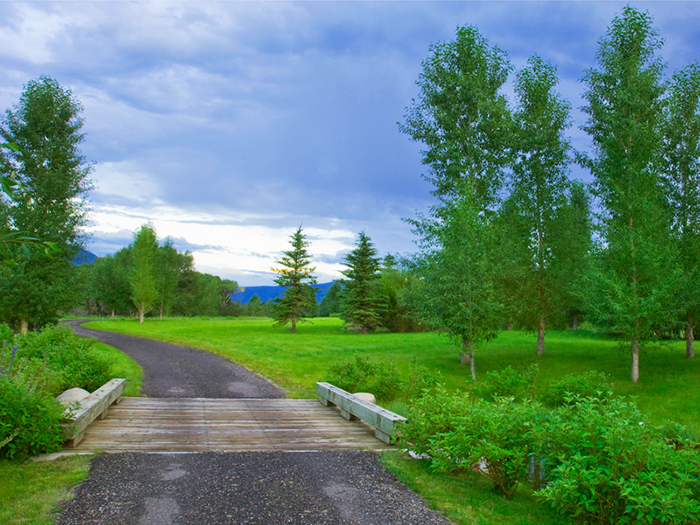 Now when entering the property, the owners are taken on an orchestrated journey that leads them down a tree-lined road, past a compound of historic buildings, over meandering streams, alongside new ponds and through vistas that expand and contract with the rise and fall of the land. “This project,” Shaw says, “reveals the true beauty of how a pastoral landscape can be experienced.”